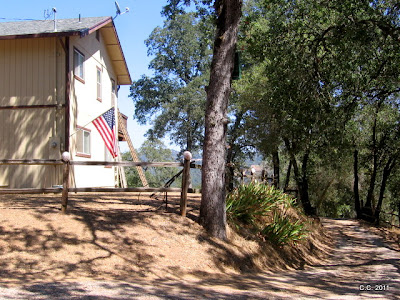 The Prospector and I drove over to our neighbors house today. This is the neighbor that called us and warned us when the fire was coming up the hill.
"D" is our hero. He doesn't think so... but he is.
If he hadn't called us we might not have gotten out in time.
Today, he was giving the Prospector some pieces of plywood that he had laying around his place. He gave them to us to use on the potting shed.
In return we brought him eggs and tomatoes.
He told me to come over, too, so I could take some pictures of our house from his property and to see the fire damage from a different point of view.
These are the photos I took this afternoon and it is a consensus of opinion that we are very lucky that the house is still standing.
(You can click on any of these photos to see them in a larger size.) 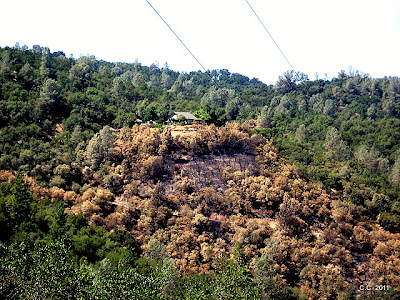 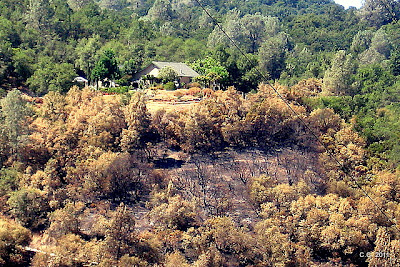 This was not a huge fire... less than ten acres. It burned in a triangular area, starting down on the river road and narrowing as it came up the hill.
The darker area in the middle of the photo (above) was all Manzanita trees. It seemed to have burned more in there than anywhere else. 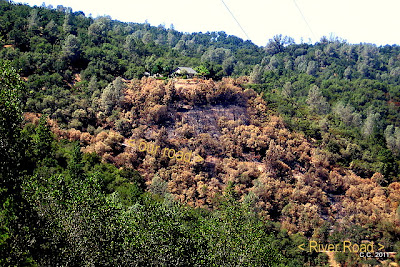 I have written "our road" in the middle of the photo to show you were the fire skipped over the road and came straight up to the house. You can also see , in the bottom right hand corner, where the river road is. This is where the fire started. The road is a well traveled country road that goes down to the Mokelumne River.
Because of "D"s trees you cannot see the length of the river road and the distance that it was burned. It's quite a long distance.
All of these photos are looking northwest toward town. I marked the roads and the house so you could get an idea where everything is. Our dirt road wraps around and comes up behind the house. 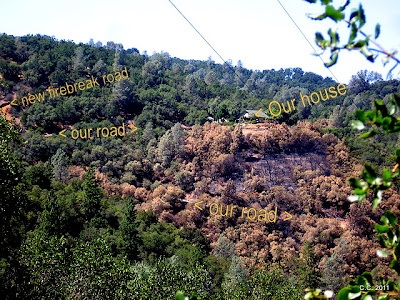 We have all been jumpy this week. Our other neighbor has been weed eating all day. There has been no information about the "arsonist".
"D" is concerned about his house and the steepness of the surrounding hillside. It's more wooded than ours with taller pines and oaks. Even though he has a fairly good defensible space around his house he is worried that a fire would do what is called "crowning" in the oaks and pines. This is where trees are so densely packed that the fire can spread from tree to tree in a phenomenon known as crown fire or crowning. Crown fires are intense and fast-moving and aided by a steep terrain.
Ours was a crawling or surface fire, fueled by low-lying vegetation such as leaf and timber litter. It also moved fast because of the steep terrain. "D"s is even steeper than ours.
He is still pretty shaken up from watching our fire. He couldn't believe how fast the fire moved up to our house.
There had not been a fire in the canyon since the 1940's.
We hope... never again.