Learning about myself and my camera

I flew to Portland on Thursday morning and my friend, "D" was there to pick me up. She drove her truck and camper from Montana. We had made reservations for the first night in Troutdale, so as to be ready for the first day of the photography workshop. It was so good to see my friend.
At some point I will tell you why we stayed three nights in the Troutdale Comfort Inn instead of sleeping in her camper... but it's a long story and will have to wait for a day when I can relate the story without laughing , crying and otherwise reliving the sad tale of the collapsible camper and how we ended up without one.

This is what we came to see and photograph. 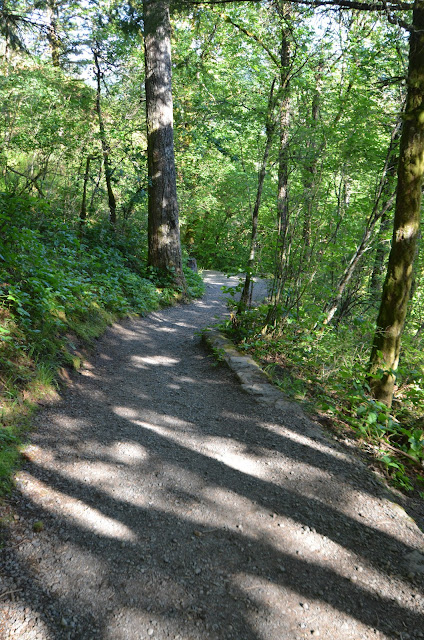 "This is the forest primeval." 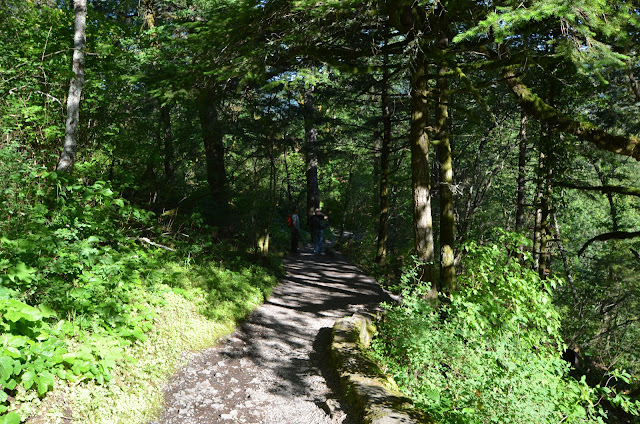 Ahead of me, in the darkness of the forest, are the other people that came together from different places and other states to join in the passion that we call photography. There ended up being four of us in this group that joined Peter West Carey for a Waterfall Workshop on the Columbia River.
At about 9:00 a.m. after an orientation and introductions, we drove to the first trail head along the highway. It was cool, almost cold, but not raining. The sun was already filtering into the dark, dense forest. 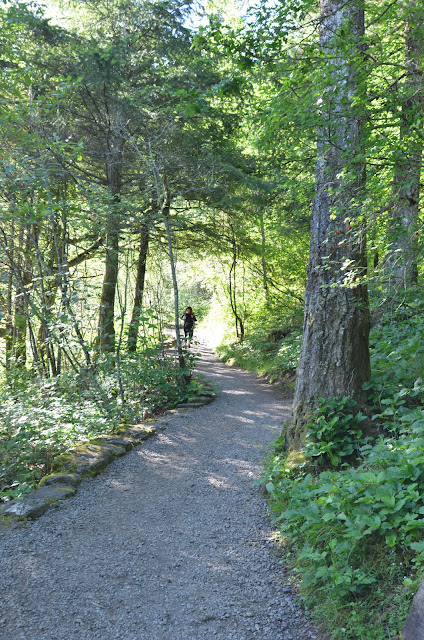 A member of our group was already taking pictures as she walked from one lovely place to the next.
We walked one third of a mile to our first waterfall. Its name is Bridal Veil Falls.
First a sun lit bridge... 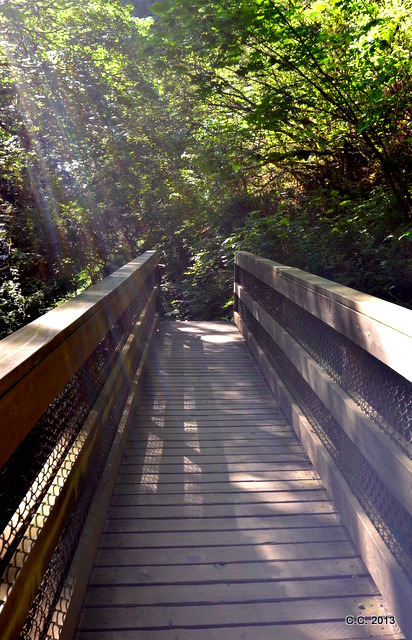 Then we saw a river, noisy and beautiful, coming from the sound of water falling somewhere above us. 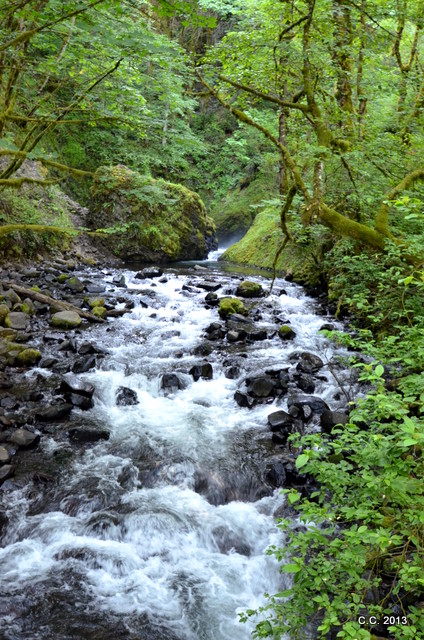 We climbed to a small observation deck and there, tucked into the mountain was Bridal Veil Falls.

The commotion of falling water commanded your attention. I had my first lesson on the manual settings of my camera and learned to adjust the settings for "sharp" water or "ribbon" water. It's about fast or slow shutter speed and it's almost magically how you can change the look of the water by this change of settings.
The KEY to a good photo is a good tripod and getting your camera securely on the tripod was a learning curve in itself... for me anyway. The tripod is absolutely necessary for sharp, clear photos.

The setting was so lovely. 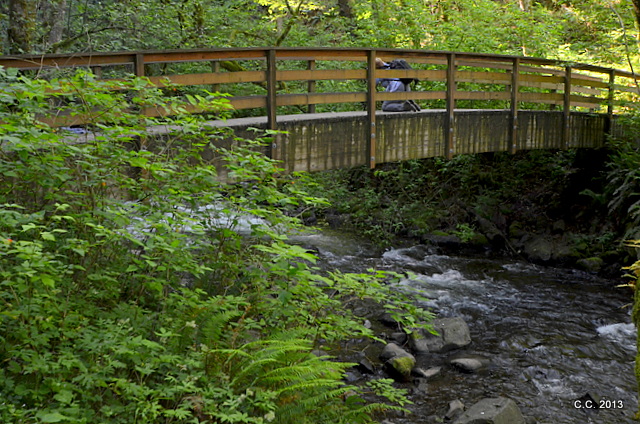 This woman was by herself and seemed very knowledgeable about photography. I talked to her for a while and picked up a few pointer. I thought the others had gone back to the cars and I started back, up to the parking lot, thinking I was late. Peter caught up with me. They were taking photos below the bridge and I hadn't seen them.
We all finally headed back to the cars and continued to the next waterfall. I took this shot of a striking flower on my way back up the trail. 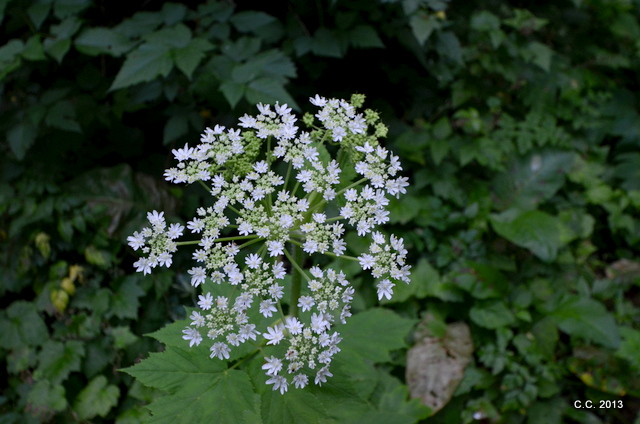 I think this is Daucus carota (common names include wild carrot, (UK) bird's nest, bishop's lace, and Queen Anne's lace (North America), but it might also be water hemlock which is deadly poisonous, or cow parsnip. I'm not sure because I didn't look at the stems which should have fine hair on them if they are Queen Anne's lace.  I'm fairly sure that this was Baucus Carota. Whichever it is , it's a beautiful flower in the midst of a mostly green forest.
We hiked back up  to the parking lot and drove to the next waterfall. This one was the very famous Multnomah Falls, what Peter calls the "grandaddy" of the Oregon waterfalls. The upper fall is 542 ft. and the lower fall is 69 ft... the tallest in Oregon.
The place was packed but there was a bathroom (very important) and FOOD, COFFEE, ICE CREAM etc. and this absolutely amazing waterfall.
That is the Benson footbridge between the upper and lower falls.

There were a lot of people walking across it and taking pictures. 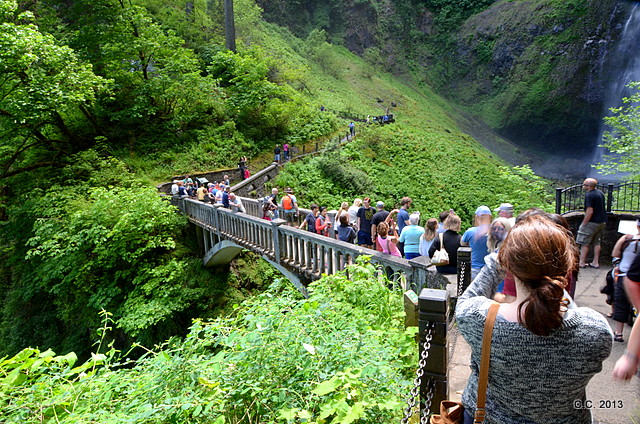 This makes it difficult to set up a tripod or take a photo without getting someone's head in the picture. So we did the best we could.
This is the lower falls below the footbridge. 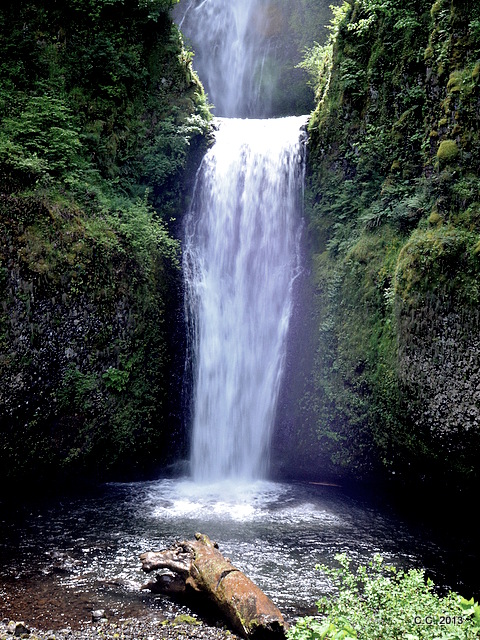 We ate lunch at the Multnomah Falls and then drove to the trail head of the Middle Oneonta Falls. This was to be a test of my endurance and ability as a 68 year old. Thank god I did some walking and hiking at home because this hike taught me, once again, the mind/body connection that you need to overcome adversity.
Tomorrow... The hike to Oneonta Falls.

Lewis and Clark expedition, April 9, 1806.  Captain Lewis wrote...
"... on our way to this village we passed several beautifull cascades which fell from a great hight over the stupendious rocks which cloles the river on both sides nearly, except a small bottom on the South side in which our hunters were encamped. the most remarkable of these casscades falls about 300 feet perpendicularly over a solid rock into a narrow bottom of the river on the south side. it is a large creek, situated about 5 miles above our encampment of the last evening. several small streams fall from a much greater hight, and in their decent become a perfect mist which collecting on the rocks below again become visible and decend a second time in the same manner before they reach the base of the rocks. ..." [Lewis, April 9, 1806]
(They had just found the Multnomah Falls. )