Dragons in the Streets

I've been gone for almost a week. Went to see my friends and family for a while. I stayed with my friend "C" in Isleton on the weekend, then drove to the Bay Area to see my grandchildren, my sister and my sons. 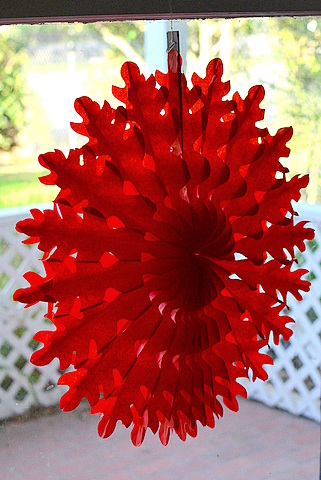 This beautiful paper decoration in my friend's window and is part of her decorations for the Chinese New Year.

This year is the year of the snake. Chinese New Year traditionally runs from the last day of the month on the Chinese calendar and continues for fifteen days. The calendar is lunisolar so it's referred to as the "Lunar New Year.".Which means that there are lots of celebrations right now and in some of these celebrations DRAGONS are involved. Chinese dragons traditionally symbolize influential and favorable powers, particularly control over water, rainfall, hurricane, and floods. The dragon is also a symbol of power, strength, and good luck.
So my friend invited me to join the community in a celebration of the new Isleton Museum and a little fun in the streets. To invite good fortune into her new home she has decorated the house. This was the centerpiece of her dining table. 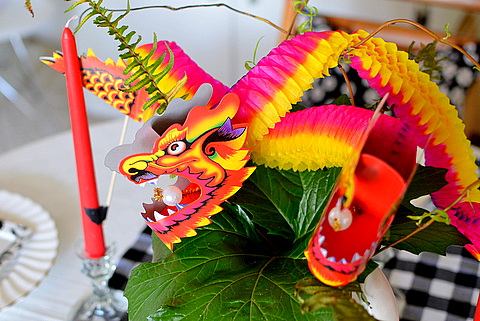 There were flowers in each room and Chinese decorations everywhere. 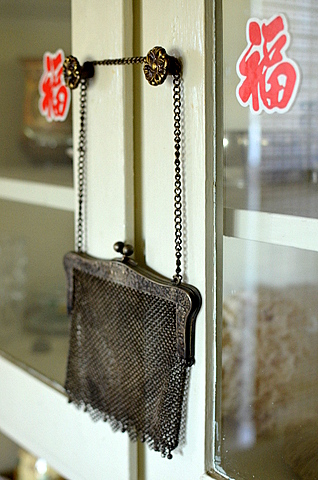 Even her bulbs were blooming in the bright living room window. 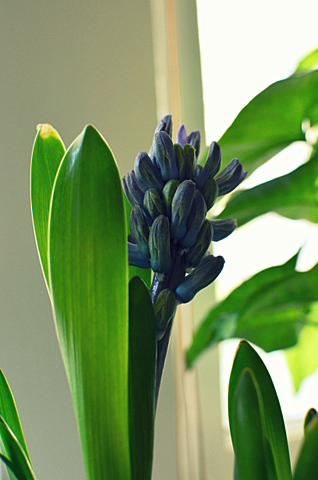 By noon, the main street was filling up with people. The celebration was beginning. 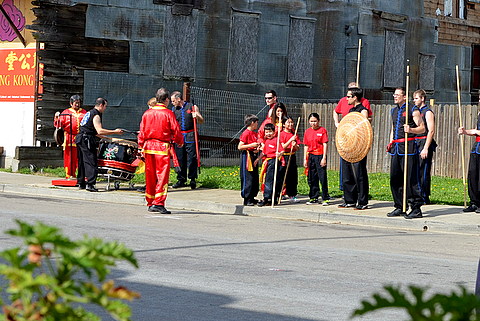 First, a martial arts group entertained in the street with drums and dance. 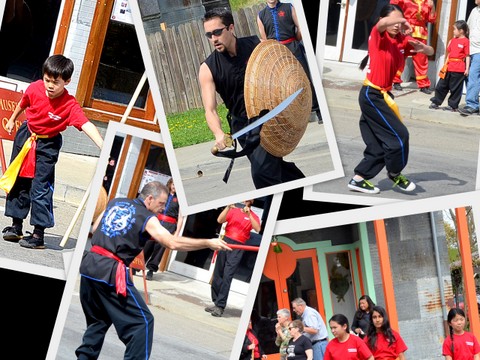 The were called the Eastern Ways Martial Arts School out of Sacramento. Interesting to watch and very entertaining. Drums beat out the rhythm and cymbals accented the moves.
Then the next few hours were turned over to the DRAGONS. 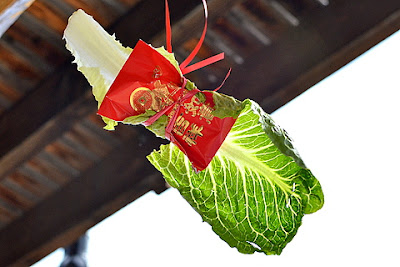 Each business that wants to bring good luck into their store or home, ties a lettuce leaf in the doorway with a red envelope that has some money in it.  If the dragon comes to your store and eats this offering (symbolically), this will bring you and your family, your business and efforts prosperity and good luck for the New Year.

Then, they released the dragons. 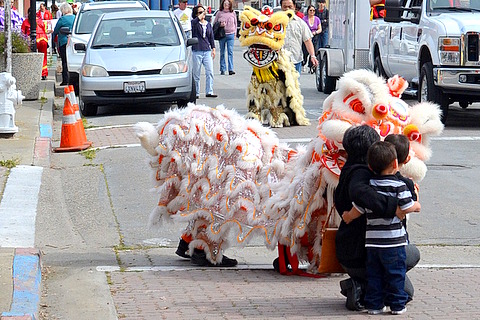 I think that some of these dragons were youngsters because they seemed more interested in the children than finding little red envelopes.

But the "older" dragons were on a mission. This purple dragon saw me taking pictures, walked right up to me and said hello. I was laughing so hard that I'm surprised the photos are in focus at all. 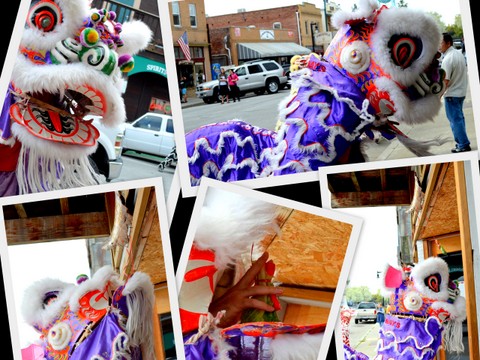 Then (moving clockwise above) it moved onto the sidewalk, past me, lifted its head, grabbed the lettuce leaf and the red envelope (with human fingers from inside its mouth... honestly... do you see it?) and walked away.
He was a dragon on a mission. 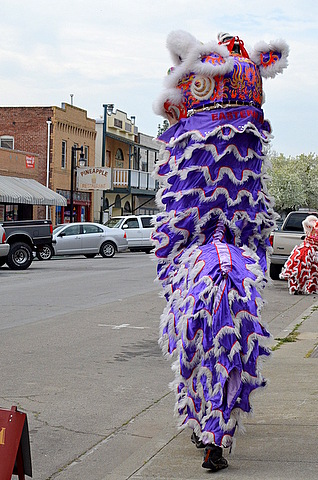 And off he went to find another offering hanging in another doorway.

I crossed the street and stood in front of Pineapple, a wonderful restaurant were we ate the night before.
This time a red dragon arrived. 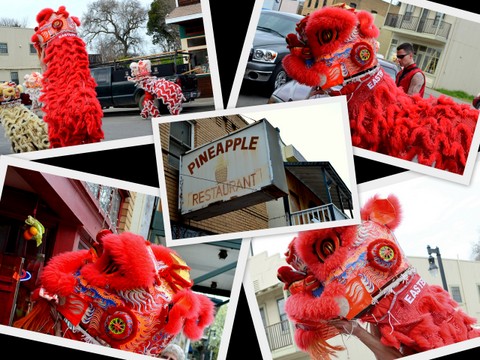 This dragon seems very powerful. It told the other dragons to move on down the street and they did. (top left, above.) This dragon also had a young man that walked with it and seemed to be a guard or protector (top right). Then it grabbed the red envelope with the lettuce leaf and two Mandarin oranges hanging in the doorway, turned and walked auspiciously down the street. This one was very "no nonsense" about it all. I felt that this one was a female. I'm not sure why.
The last one, toward the end of the street near my friend's house, was a black dragon. This one seems a bit confused about what he was suppose to be doing. He  didn't grab the lettuce leaf. He walked into the cafe and had to be led out backwards because, you see, he was very big and dragons have a hard time turning around in small spaces. The Levee Cafe is very small. 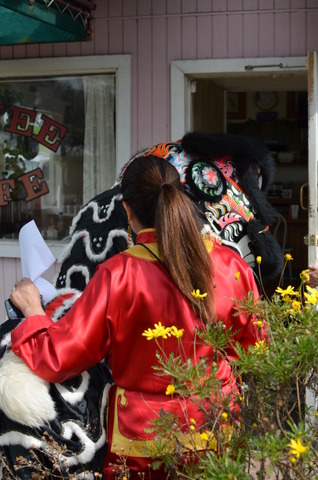 They finally got him out. I think he might have been a little embarrassed but he kept his composure. He took a moment to find his bearings and then he moved out into the street. 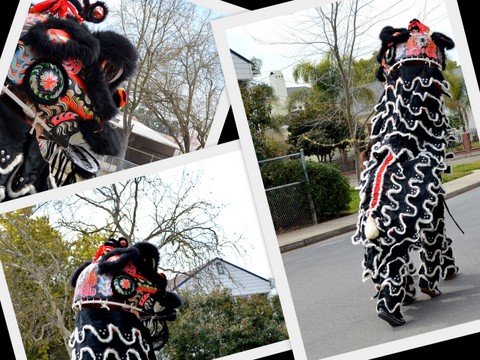 As he went past my friend's house, he hesitated and looked at the porch.
"C" later said that she wished she had hung a red envelope there for the dragons, because she wanted to have the house blessed and bring it good fortune for the new year. I told her that next year we would remember to do this. The only thing is... this dragon might try to go inside the house and Max, her little dog, would want to defend his domain. It might not be a pretty picture. Max can get quite an attitude about these things.
The dragons disappeared. The river town went back to normal and we had dinner that night in "C"s dining room, with a little reminder of the wonderful day. 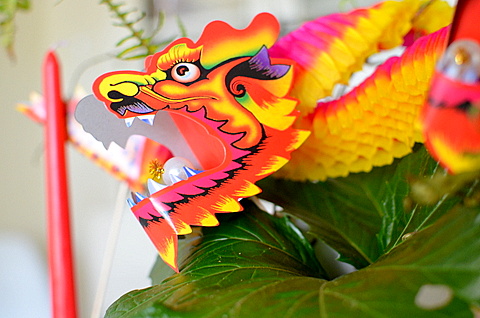 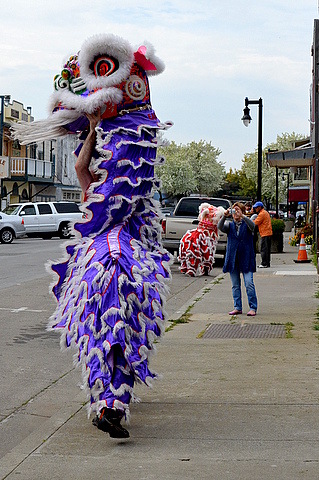 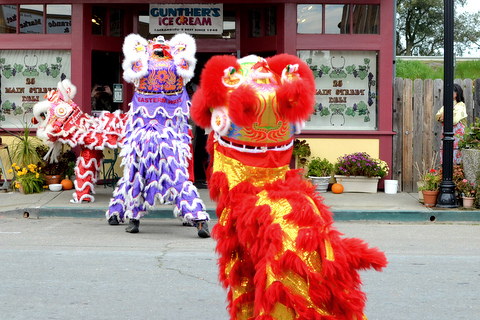 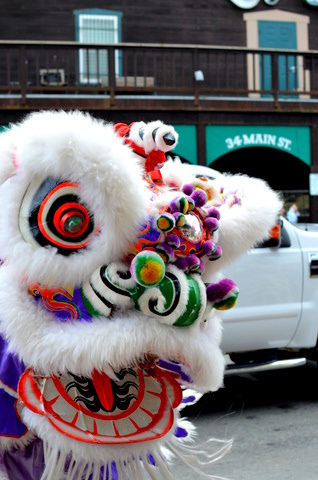