Winter? I don't think so.

I've taken the snow effect off of my blog. It just doesn't look right when I post photos that look like this. 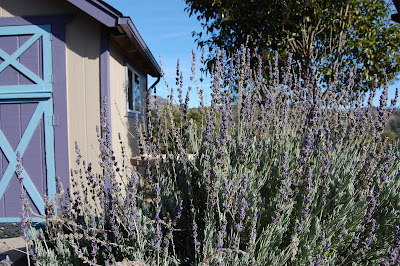 I haven't cut the lavender back because it blooming like crazy and the bees are all over it. 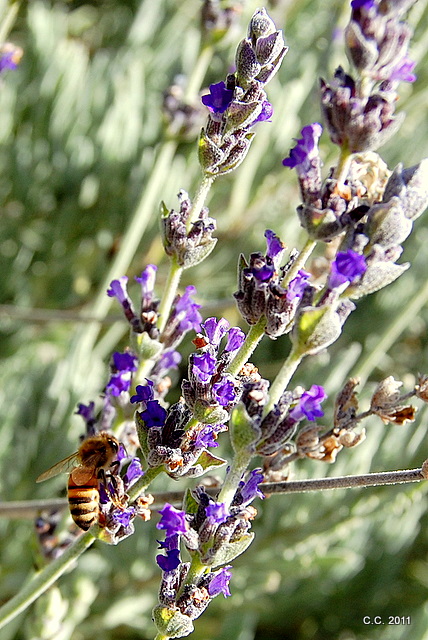 I just can't cut the bush back with all these bees having such a great time.
Does this look like Winter to you?

I also decided to wash the windows. 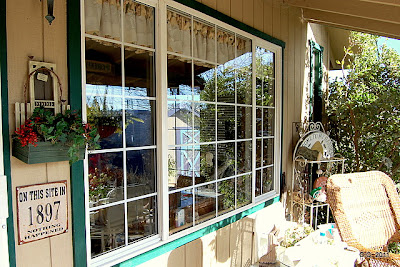 I pulled the chairs and table away, took the screens off and washed them separately and used the sprayer on the hose to get all the cobwebs off before I cleaned the windows with ammonia and water.  The sprayer is like a "fair warning" to bugs and spiders  before the soap and ammonia hits.
Look nice and clean don't they?
Come on rain. I'm being really in your face about this.
Then I sensed someone was watching me. I turned... and right behind me up in the eaves of the porch, guess whooo was giving me the eye. 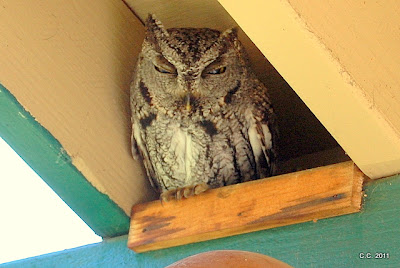 "Can't you do this at night, when I'm gone? I was sleeping and you woke me up."
"Hi little guy." I replied, "I forgot you were up there. You haven't been here for a few days."
"Well..." he said, "I've been hunting and it's a lot of hard work. So please stop all the spraying and cleaning and let me sleep."
I could tell that he wasn't a very happy little owl and then, to demonstrate his annoyance,  he gave me his fiercest look.
He tries to look mean. I almost have to laugh because he's so little. I guess the little mice and ground animals don't laugh when he swoops down on them but, well... he's so cute when he tries to act tough. 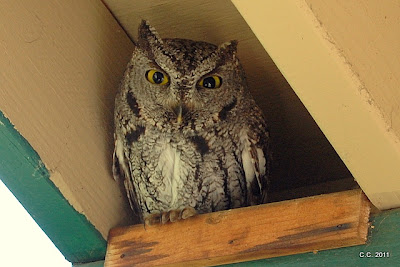 I told him I was sorry but I needed to finish the windows. I told him it would only be a few more minutes.
He waited... and then, when I left the porch, he went back to sleep.
Do you see that his left pupil is bigger than his right one? Does anyone know if that's normal or not? I noticed it before. The left pupil is dilated more that the right.
So it's quite apparent that Winter decided to take a vacation this year. I might as well tempt fate and wash some windows. What the heck! You know what they say about this. If you clean your windows or wash your car it will rain... so I'm doing a rendition of a "rain dance". We'll see.
Everything seems to be enjoying the sunny weather.
Carl found himself a warm spot and  looks like he's telling me,
"Don't come any closer to me with that camera, Farmlady. Just leave me be." 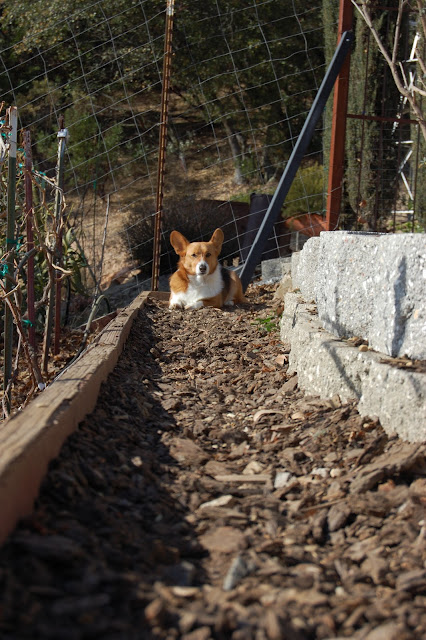 And the Paperwhites are blooming. 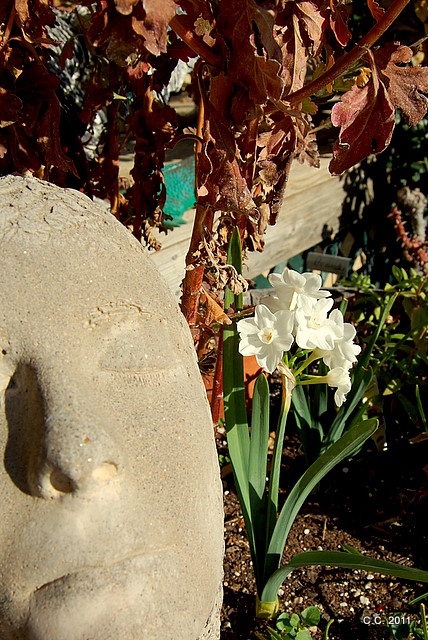 I find it all kind of strange. What do you think? If this is Winter...
THE CLIMATE

CHANGING....
And I don't think it's just about us and our carelessness... or emissions.
It's just changing... Something is different.
It's happening quite fast.
I can feel it in the air.
Somethings up...
Posted by farmlady at 3:00 PM 18 comments:

My friend C, her daughter and C's new little pup, Max, came up from Sacramento for lunch today. Enjoyed the visit so much. Her daughter is visiting from Boston and it was so good to see her again. I watched her grow up in Mendocino, California where C use to live. She has grown into a beautiful and intelligent young lady.
Momma C, you did good. It says something for raising children in a Pigmy Forest. You gave her roots and wings and ... creativity. You painted tennis shoes and built her tree houses. You gave her a magical upbringing and you should be proud.

So, I didn't do a post today for all the entertaining, but tonight I was reading some of my favorite blogs and I have to share this post with you.
I'm sending you over to read Nancy's post. It's wonderful.


I hope all of you enjoy this as much as I did.
Happy New Year!
Posted by farmlady at 9:58 PM 9 comments:

Cleaned the house today and helped The Prospector give Brownie his shot. I will tell you about Brownie when I have day that I can do a long post. He's getting better. He had another accident and the traveling vet came to visit. That was two weeks ago. He's receiving special treatment and has his own digs for a while. I will write more later.
Today after I vacuumed and mopped and dusted the house I took a break and went outside with the dogs.
It was another beautiful day. It's almost scary how beautiful it is here.

The Corgi boys greeted me. 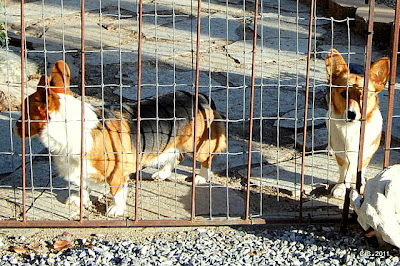 "You boys want to play a game?" They looked at me like Corgis do and Carl started to walk away.
I know he was saying, under his breath, "Here comes Farmlady with the camera again."
"Hey, wait. This will be fun, guys. Let's play Corgi Cam. You know I follow you around and pretend I'm one of you and we take picures from a dog point of view. What'a you say. Come on. Give Farmlady a break. She's been in the house all morning. Humor her." 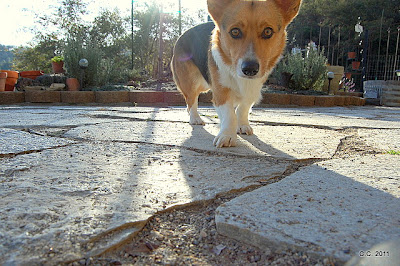 Cutter looked at me and said, "I never played this game before." 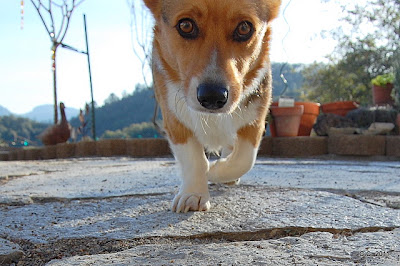 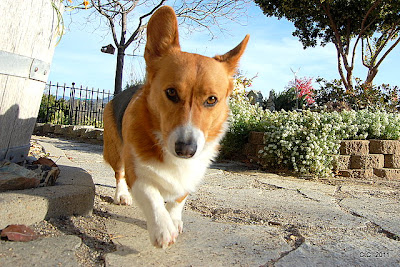 Carl came on the run. "Oh no you don't. I will do it. I want to be in control of the camera taking."
"Well, Carl," I said, " I think I'm going to let Cutter do this because he hasn't done it before."
Carl got that look on his face that says, "Oh yeah!" So, I told him that Cutter would be the director of this show and he (Carl) would have to live with it.  That's when he disappeared into the bushes.
Cutter followed and we caught this on Corgi Cam. 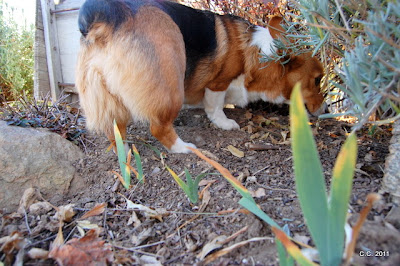 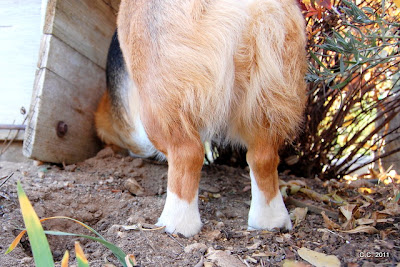 Taking photos from the height of a small dog is as strenuous as vacuuming and mopping. Following Cutter around with the camera and taking photos from his point of view is kind of a feat in itself. ( You didn't really think that I would strap my precious Nikon to Cutter's back did you?)
Well, so far the results were less that wonderful so I called Cutter over to the fence and he saw the cat. That's when things got more interesting. 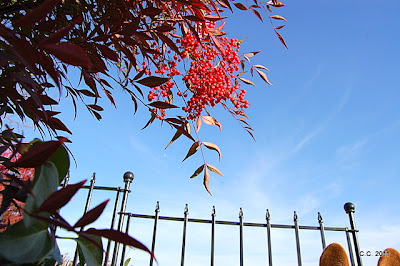 Carl followed us and both the dogs were preoccupied with Annie, our cat, for quite some time while I sat under the Heavenly Bamboo and wondered what the heck I was doing out here with these silly dogs when I could have taken a nap instead.
Then I called them up on the porch so I could sit down for a little bit. This is when Cutter got a whiff of "You know hoooooo.." up in the corner of the porch. Our little visitor, the Screech Owl, is still resting up there during the day. 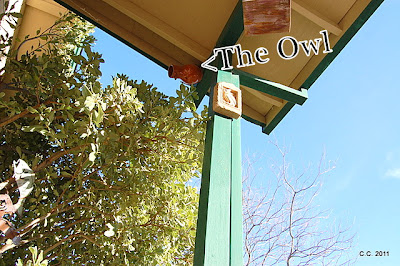 From a Corgi point of view, the little owl is very safe up there. The dogs sniffed and look up there but they didn't bark. The owl quietly watched them until they walked away.
Then it was time to stop the game. My back was hurting and I needed to sit down for a while.

The last "dog cam" shot is a familiar one to the Corgi boys. They are always on the wrong side of this door. They either want out when they are inside, or... they want in when they are outside. It's  a very well know stop for them. 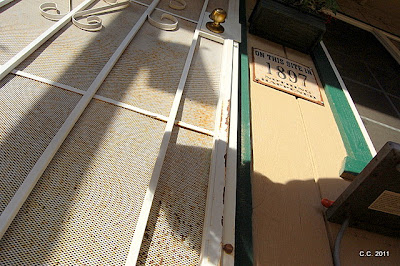 You can tell I reached high and low for something to post about today. It finally came to me at about 9:30  tonight and now I'm done. I'm going to bid you all a fond goodnight because I can't think of anything else to add to this already stimulating post.
Posted by farmlady at 10:51 PM 8 comments: