What a week it was.
My friend "D", from Montana, arrived at Sacramento Airport last Friday night, with a heavy bag and a weary expression. She had all her big camera equipment in her "carry on"  and wanted to keep her luggage with her, so she didn't check her bags... she carried them and they were heavy.  She had a long layover in Seattle where she had to switch planes. She was really glad to be done with being "in the air". We drove back up to Jackson and settled in.
We rested up on the weekend, only going to the River Reflections celebration at Pardee Reservoir on Saturday and going to dinner at Teresa's for dinner on Mother's Day.

This was one of the really creative artists that contributed to the River Reflections festivities. Her name is Leslie Vasquez and this is an interpretation of the beautiful Mokelumne River. 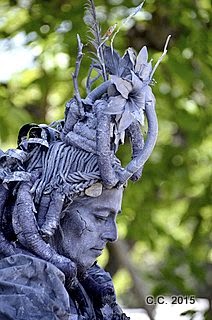 Amazing costume. Amazing idea. She is the river. 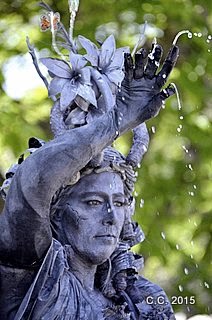 She is all the parts of the river that make it what it is... the rocks, the flora and fauna, the water...flowing from her finger tips. I'm not sure how this was done, but it was mesmerizing.
We had a good time and enjoyed the beautiful day.
Sunday I showed "D" how to blow out eggs and create little ornaments out of them. She even did some Squeekie eggs. One of the reasons that she came down was to learn how to make these eggs... kind of like a Mother's Day special workshop. She was inspired by my post on my mom's eggs at Easter. We had a great time working on them. She was an egg-obssessed woman. She created 6 or 7 of them and then we packed them up and sent them to Montana. When the mail guy asked if we had anything "fragile" in the package... we laughed and said "Oh, yeah." at the same time. I forgot to take a picture of them before we packaged them. They were beautiful.

On Monday we left for Yosemite. We drove south on highway 49 through Angels Camp and Jamestown, continued south to Coulterville where we stopped for coffee and information. The place is called Mary Lou's Cup of Brew and it was just what we needed.  We were able to stop and stretch, use her bathroom, drink some good coffee, eat a blueberry scone and... she gave us some great information about getting to Yosemite. 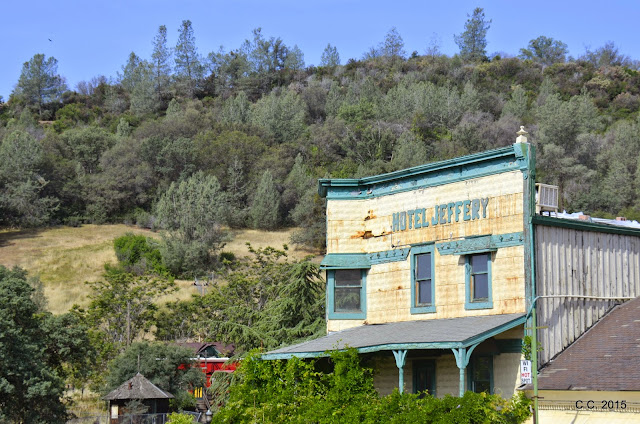 She  recommended the route east, over to 120 instead of the really winding highway 49 into Mariposa. So we drove east to 120... which was a nicer drive and went into the park at the north entrance.

We drove through the Rim fire area, the fire that started in August of 2013. It's such a scar on the landscape. 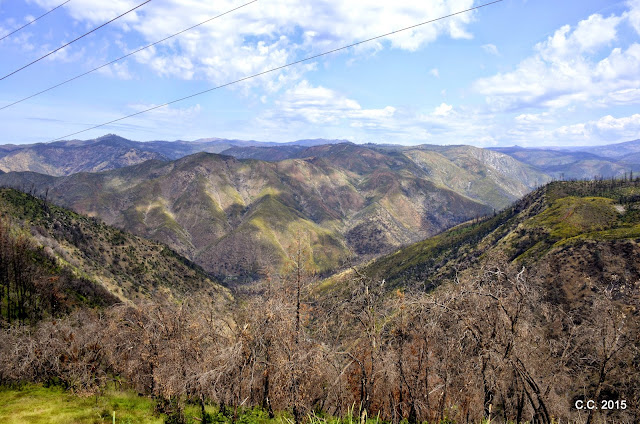 It was the third largest wildfire in California's history and burned 257,314 acres (402.053 sq. miles). It was the largest wildfire on record in the Sierra Nevada mountain range.Yes, there's some green growth on the ground but the trees are burned beyond anything you can imagine. It's very sad. As far as you can see, there is nothing but scorched earth.
Even after we entered the park the burned area continued. The fire consumed 78,895 acres of parkland on its North edge.
We drove to Crane Flat and decided to drive east to the upper part of Yosemite. We had reservations in Yosemite Valley but couldn't get into our room until 5:00 p.m. anyway, so we thought that a drive east on Tioga Rd. would be fun. Donna had never seen any of this and it has been years since I had traveled in the upper part of the park.This is an amazingly beautiful drive.
We stopped many times. There were trees growing out of the granite. 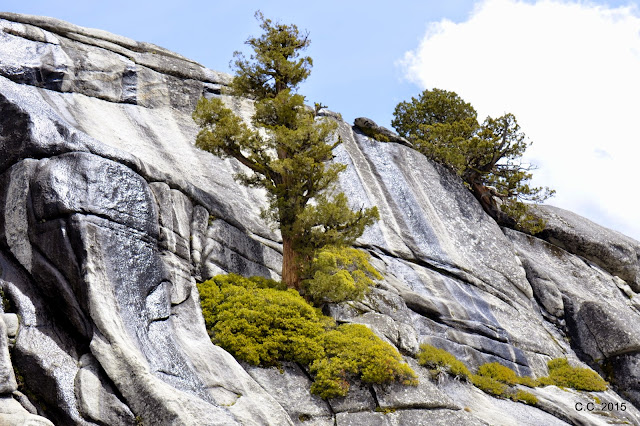 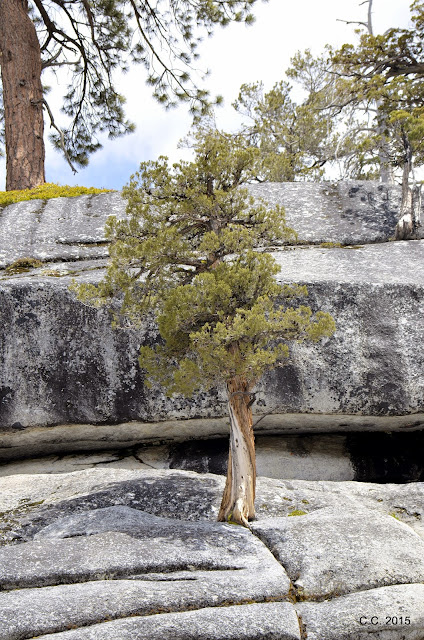 These are, I believe called Bristlecone pines. Some are more than 5,000 years old. 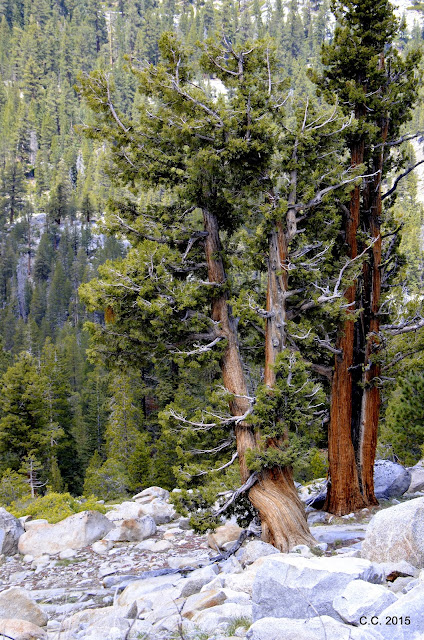 These beautiful twisted trees sometimes have roots that are growing out on the rock, as if they didn't need dirt... as if the elements are giving them what they need and they are completely adapted to their environment. This is deceptive though. They are really kind of endangered because of their low rate of reproduction and regeneration. It is thought that under present climatic and environmental conditions the rate of regeneration may be insufficient to sustain its population.

We parked and got out at Olmsted Point.  It was very cold and extremely windy.  It was so cold that I forgot to reset the settings on my camera and over exposed every photo at the lookout. I did get better results coming back that night. I will show some photos of this later.

Then we drove up through Tuolumne Meadows where the Pacific Coast Trail and the John Muir Trail come through. This is a beautiful high mountain valley... with a visitor's center and facilities (yes... bathrooms.) 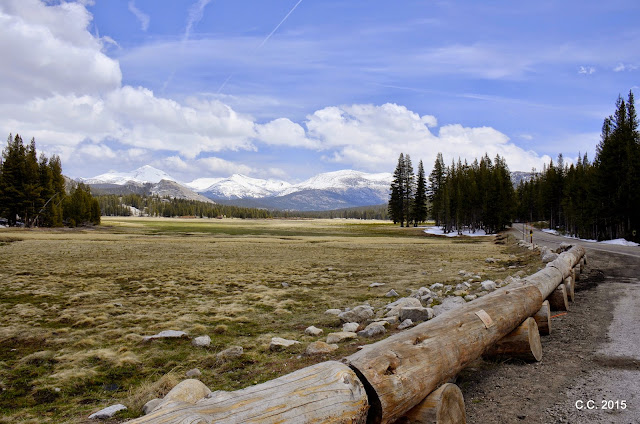 With a beautiful Coyote that greeted us on the highway. 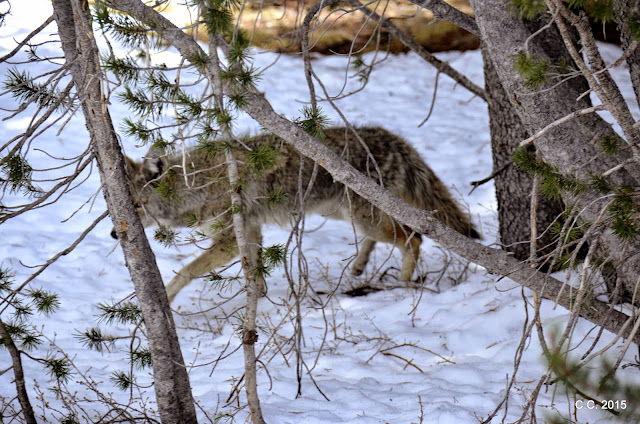 This Coyote was way too use to people. It was weary but not that afraid. 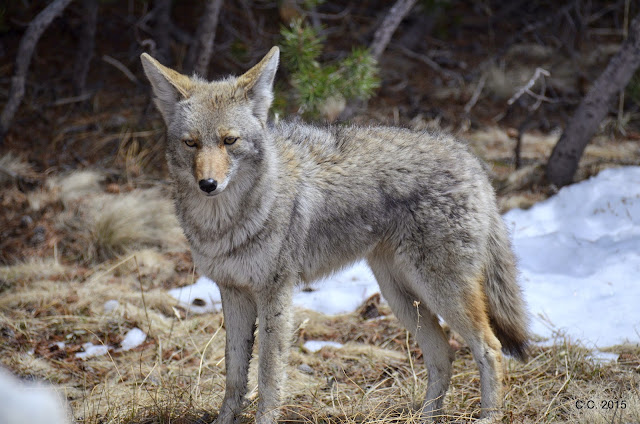 I think it was young and thought we might have some food. There is up to a $5,000. fine for feeding the animals in the park, but still... this animal acted like he had been fed before.

What a beautiful creature . 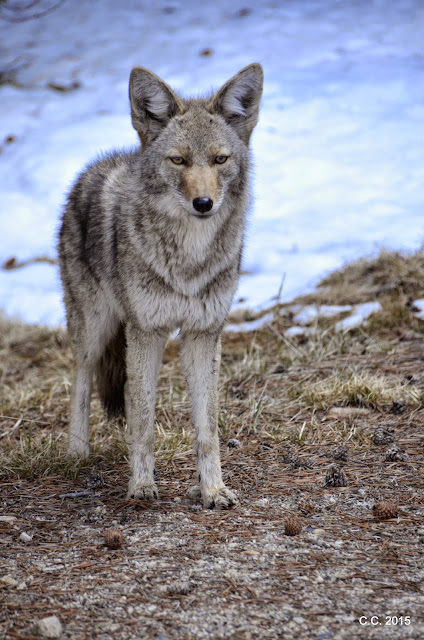 It stuck around for quite a while... waiting and watching  for anyone who might give it something to eat. We loved being so close to something so wild but it's a shame that they aren't afraid of humans. 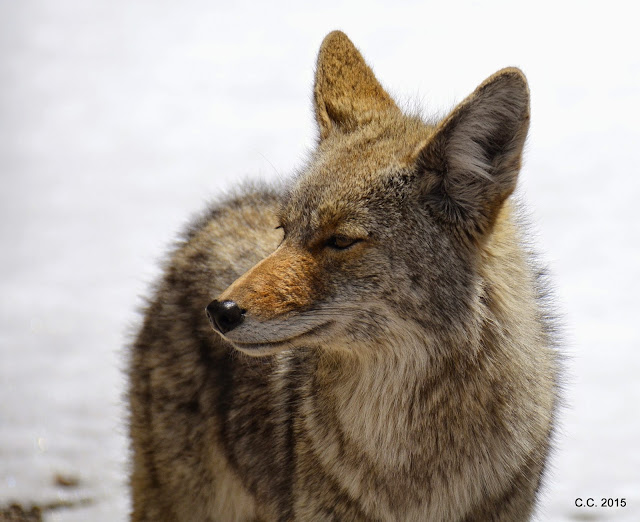 The Stellar Jay was the same. Waiting in the rest area for someone to throw bread or food in its direction.
Looking annoyed about the situation... 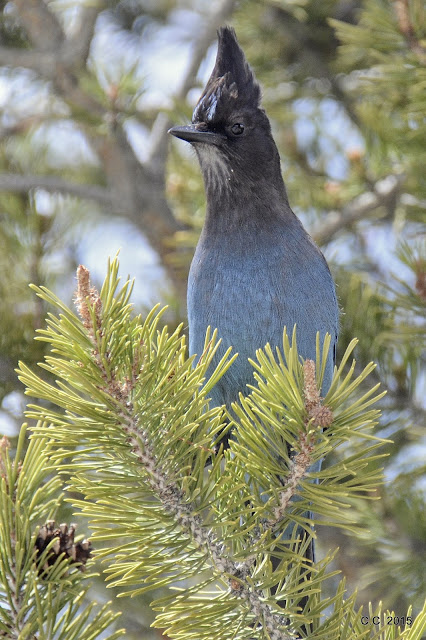 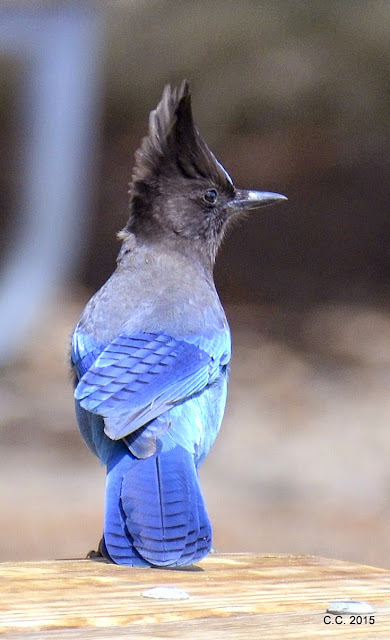 ... looking for food and making a lot of noise about it. "D" wanted those blue feathers to decorate her eggs, but there weren't any lying around so... here are your feathers, m' dear. Frame them and enjoy. The bird didn't want to give them up. You know I tried. I talked to him.  He said "No... no food, no feathers."

The scenery is awesome on Tioga Pass. It's so huge and wild. 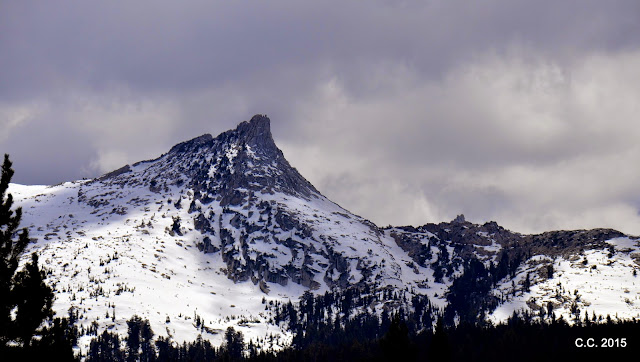 Every turn in the road takes your breath away. 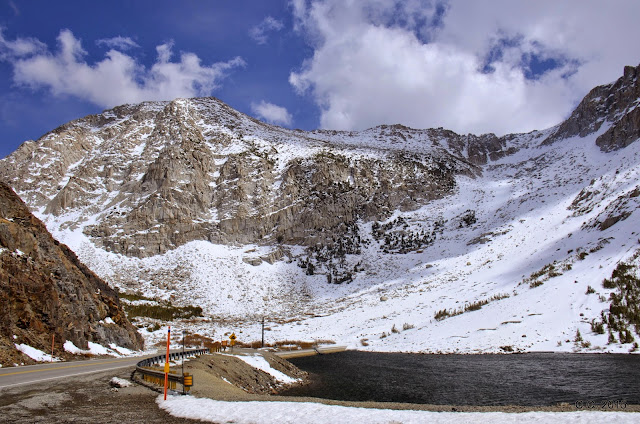 This is somewhere near Tioga Pass and the eastern entrance to the park. I'm going to stop now and save Lee Vining and Mono Lake for another post. I'm still tired from all the activity and need my beauty sleep.
Haven't really caught up yet. It's all Donna's fault. She's been dragging me around and getting me in trouble since we were 10 years old.... but I love it.