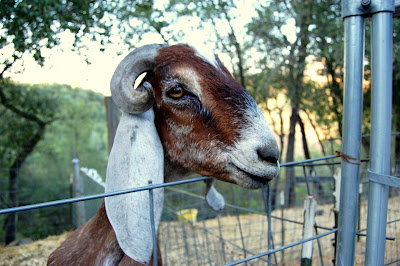 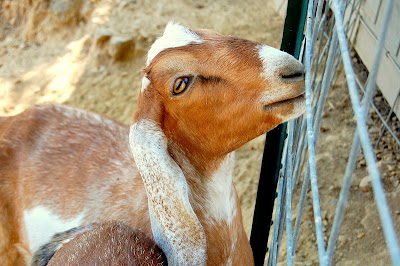 "Hello Frecks. How's my beautiful goat today?"
"Hello, Farmlady. I'm sorry to hear about your Mother. The Prospector told us what happen. He had tears in his eyes one morning when he came out to feed us. He said she was a wonderful lady."
" She was, Frecks, she was."
" Well, please don't be too sad. We goats don't stay with our mothers so we don't form attachments."
"Maybe it's better that way."
"No farmlady, I don't think so. I still remember someone who nursed me and licked my eyes. I think she was beautiful. I think that I would like to see her again."

"Oh Frecks. We all miss the memory of the early years, don't we? Your so sweet. I'll bet that she was just as beautiful as you remember.

"Then remembering is a good thing, Farmlady? Sometimes it makes me sad."

" Try to remember the good things, sweetie. It's the good memories that we need. Even if they make you a little sad, it's OK. as long as they make you feel warm inside."
"Yes, I have warm inside of me. It must be a good memory."
"That's why you're such a wonderful goat, Frecks, because you had a loving mother." 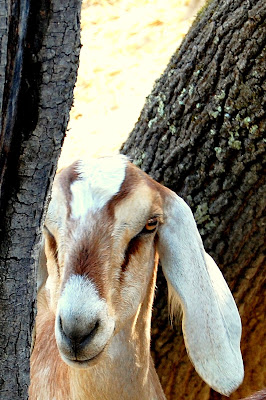 Hey Murphy. What are you hiding behind the tree for?"
SILENCE
"Murphy? I missed you. What's the matter?"
SILENCE 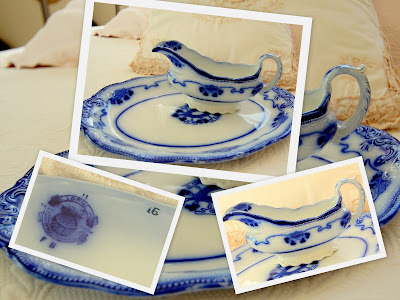 Cleaning out my mother's house was, sometimes, overwhelming. I couldn't let go of those things that I remembered in our home; things that went back to my childhood and were wrapped inside all of the cupboards and corners of my memory.
The flow blue platter and the gravy boat were used for special dinners for as long as I can remember and, because they are so old, I suspect they might have been my grandma's as well.
I spent the morning researching Flow Blue on the Internet and I'm more confused than enlightened. I did learn that if it says England on the back or Bottom of a piece (which these do) that they were made after the 1900's. It had to do with U.S. tax laws on imported goods starting in the 1890's. This pattern is called "Lorne" and has a shamrock design. 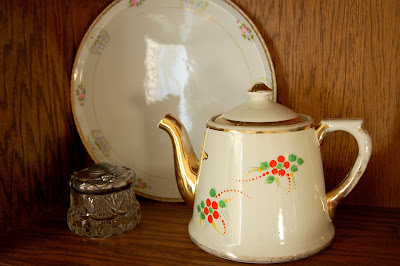 The large serving plate, with the charming 1910-1920's design, is hand painted. The mark on the underside says "hand painted" and "Nippon" with an "M" in the middle of a circle of olive branches (I'm guessing on the leaf).
"Nippon," simply means "Japan." Nippon china was produced for export to the United States beginning in 1865, when the country ended its long period of commercial isolation, and ending in 1921, when the United States enforced the McKinley Tariff act which prohibited the import of items which were not "plainly marked, stamped, branded or labeled in legible English words. As Nippon was considered the Japanese word for the country of origin, "Japan" being the English equivalent, the period of the Nippon china mark came to an end.
The big (and it is huge) heavy teapot is not something I remember Mom using. We found it way back in a cupboard over the refrigerator. It's a wonderful teapot that would keep tea hot for hours. The mark on the underside is so blurred that I'm still trying to figure it out. It does have what appears to be an AP in the middle of the stamp. The two letters are capitalized and joined together. I think this pot is just charming. The design seems to be pottery glazed and fired. The gold is very worn.
The small crystal container with a very worn silver lid was my grandmothers. I remember it on her dresser. 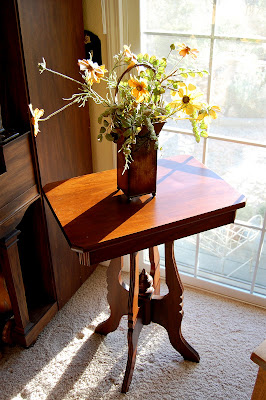 This is the only piece of furniture I was able to fit into my Toyota. I was waiting for a highway patrolman to stop me all the way home because I couldn't see out the back window with all the stuff that was piled up behind the back seat. This table was on top of everything and I swore I wouldn't leave without it. This was always in my mother's bedroom window. I don't know much about it yet but I will research the style when I have more time. I just love it.
There is an old oak buffet and an oak, glass doored, bookcase desk that are still in the house waiting for me to figure out how I'm going to get them up here and then ...., where I'm going to put them. Something is going to have to leave my house in order to accommodate these beautiful pieces. This is so hard. I NEED A BIGGER HOUSE!!

Please check out all of the posts listed for Vintage Thingies Thursday at Colorado Lady's Blog. There are always lots of great vintage items and interesting stories.

Wordless Wednesday: She Walked in Beauty 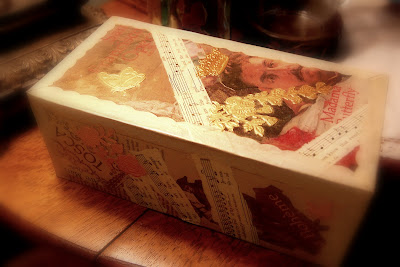 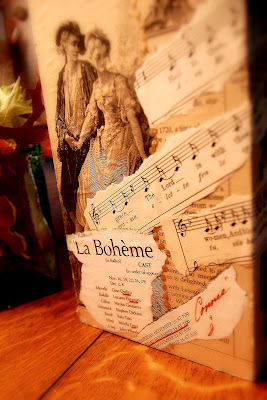 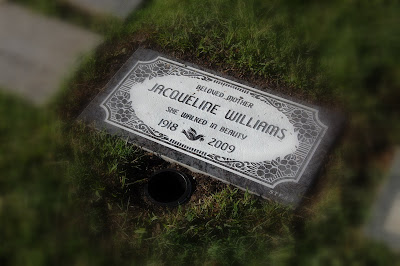 I am home again. There is a difference inside of me. I haven't sorted out all the feelings yet.

The Memorial, last Monday, was so lovely. The blue sky, with it's gray and white clouds moving quietly across the landscape

, were beautiful and protecting.
All of Mom's friends and relatives were there as we said goodbye.
A priest gave the memorial service. A poem was read, a neighbor talked of memories and we all touched the container before it was put into the earth.

We drove back to my Mom and Dad's house and had lunch. All the folks that she loved were there, in her home, eating and having a good time: Some inside, some out in the backyard. Everyone had a story to tell about this woman we called "Mom". I know that she was there, somehow, listening to the conversation and the classical music.
She loved this house and loved it even more when it was filled with people and good food.
It was a wonderful conclusion to our Mother's life.

er cat, Honey, was watching from the fence behind the old oak. We have been feeding her for all the months that Mom has been gone from the house. Honey stays...., waiting. She eats and looks around but won't let anyone get near her. She seems OK and continues to live, at least primarily, in Mom's backyard. We see her across the street and in front of the house where she then disappears for the day, returning at night to sleep in the safety of the garage.
We are not sure what to do about her. My son and his family will be moving in next month, which is a wonderful development and we are hoping, with a little encouragement , that she will become this family's new cat.
We can only hope.....