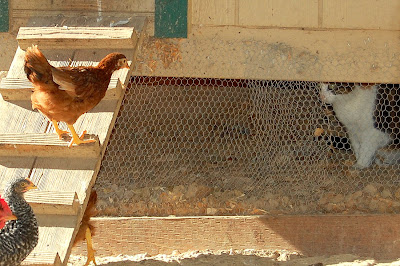 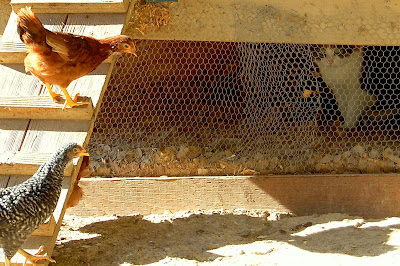 I will be gone until Tuesday.  I'm going down to the Bay Area to celebrate both of my son's birthdays and Mother's Day. I brought my oldest home from the hospital, 41 years ago today and 5 years later the Bean's Daddy came along. They may be 5 years apart but their birthdays are only 3 days apart. So, we will celebrate these two wonderful human beings that I brought into the world so long ago and I will celebrate Mother's Day because they couldn't have done it without me.
Keep an eye on Annibel for me while I'm gone.
Posted by farmlady at 9:00 AM 12 comments: 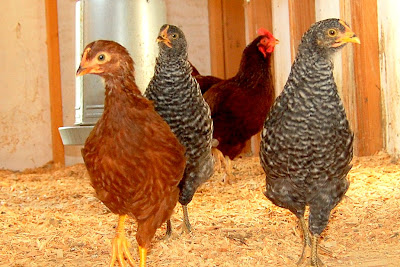 The new chicks are growing amazingly fast. They are looking for new horizons and yesterday they decided to take a big step toward the sunny ramp leading out of the chicken house. 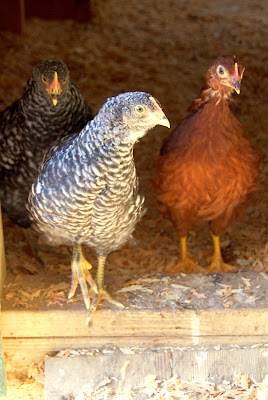 Standing on the brink of a new life as part of a flock, they will venture forth into the sunlight with determination and bravery. 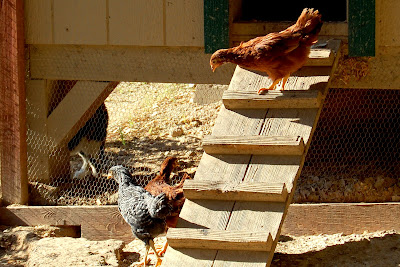 "Hey, Tonya, that doesn't look like a chicken. What do you think it is? Maybe we should go back inside."

(There..., under the hen house, thinking that no one could see her, Annibel the cat waited. She wasn't exactly stalking them but I find it interesting that she was so curious. The chicks definitely noticed her. Eventually they went back into the hen house and Annibel followed me back to the house. I think she is too use to the chickens to really bother them. All the same..., I will keep an eye on her. We have a turkey that comes to eat corn and drink water across the driveway and she pretends to stalk this big turkey. They have had many standoffs. The turkey stands it's ground and Annibel usually ends up walking away. I think it's a game but you never know with cats. I will not be letting the new Roadies and Rocks "free range" until they are big bad mommas.) 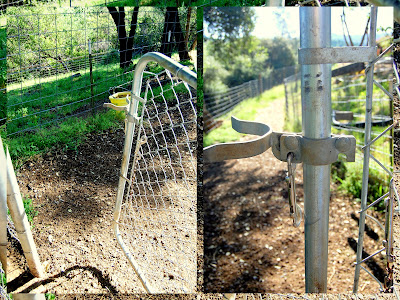 It was 8:30 a.m. on a beautiful spring morning. Farmlady went out to feed the goats and open the gate to the pasture. "Wait! What's going on here?", she cried. The gate was standing open and the lock was still in place. The goats were no where to be seen. "Oh no," thought Farmlady, "This can't be. I know I closed and locked the gate last night. "
She walked around to the front pasture and there they were.... 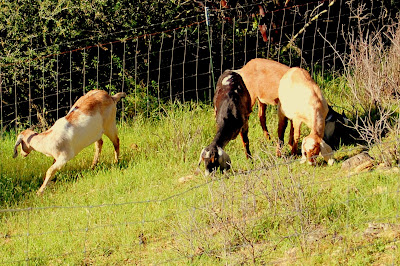 "How did you do that?" She shouted. They were enjoying their morning grass and looking oddly innocent.
"Brownie, I see you hiding from me. How did you goats get through the gate? The latch is bent. The lock is still attach . How did you get out?"
They walked over to the fence. Brownie was about to say something and then Farmlady heard Murphy say, "Brownie, be careful what you say. Don't ruin everything." 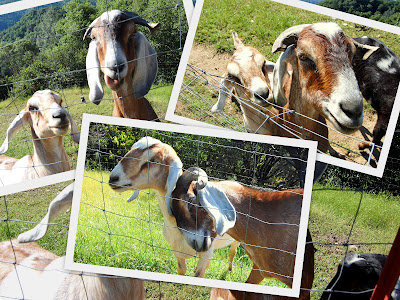 Brownie started to say something, gave Farmlady a small smile and stopped.
"How did you do it Brownie?" asked Farmlady and then she waited for a reply.
Brownie leaned against Murph' and closed his eyes. She thought she heard Murphy say, in a low voice.. "It's OK Brownie. Be strong."
"Your not going to tell me are you?" Farmlady shook her head. It was a conspiracy of goats.
Farmlady backed away and realized that this was another goat secret that she would never figure out. Murphy, she surmised, was becoming the new leader of the pack and because he was the smartest goat and had magical powers , there would always be things happening around the farm that she would not have answers for. The goat boys were learning that strength in numbers was important and Brownie was learning to heed the other goat's advice.. at least Murphy's advice. She thought to herself that this was not an altogether bad thing.
The goats were use to being let out earlier. They waited until they got tired of waiting and then made a decision that the power should be in their hands (hooves). The will to be the masters of their own world won the pasture. Nietzsche would have been proud.
Farmlady thought that she would open the gate earlier tomorrow morning. The Prospector was away for a few days and she was use to doing inside things first. Maybe she had waited too late in the morning to let them out.
She sighed deeply... tomorrow would be different. 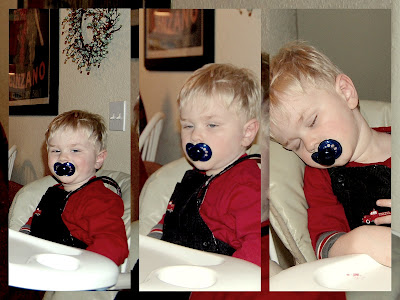 Remember this feeling? Being so, so sleepy. The eyelids getting heavier..., tummy full ..... and if it wasn't a "binky", it was a favorite blanket or a bear with it's button eye missing. Your family was all around you and the world seemed safe. 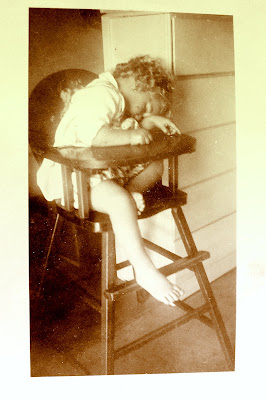 (My grandson, "baby bean" and myself at about the same age.) 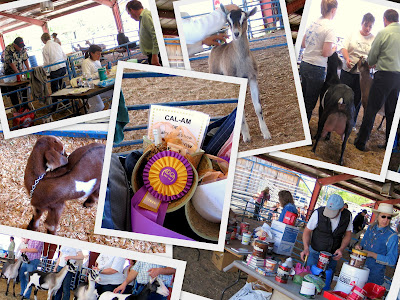 Our Goat club sponsored the yearly CAL_AM Dairy Goat Show yesterday at the Fairgrounds in Plymouth, CA. This was my first time being part of the show and I really enjoyed it. I worked at the raffle (excuse me... we are suppose to call it an "opportunity drawing" now.) table, where folks bought tickets and put them in cans for the prize that they wanted. If their ticket was drawn at the end of the day, they won the prize. We got local businesses to donate gift baskets and some of the members brought items like wine, fresh eggs and "goat" products to raffle off. We had everything from goat soap to pitchforks. Everything was gone at the end of the day. We made a lot of money for our club.
This is how these big dairy goats start out...so cute and little. Some stay small and some grow into huge goats. 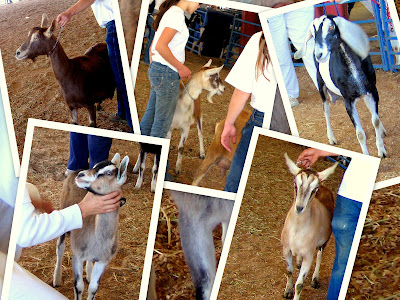 These (above) are all doelings and some of my favorites. No wait...the two on the top left were already milkers. I sound like I know what I'm talking about but I don't. I just know that I had a great time and watching the judges look for height, configuration, size of udders etc. is fascinating.
They were all females but different breeds. There were lots of Alpines(erect short ears), Nubians( with long ears, like mine), Saanens( that are white or cream colored) and some Nigerian Dwarfs. There were also some does without any ears, just a small opening on each side of their head. I think someone said they were from Africa but I don't remember what they were called.
The NUBIANS were making the loudest noises of all the goats. Like mine, they are such Drama Queens. But, they ALL contributed to the production of NANNY BERRIES( goat manure ). When you have over 100 goats in one place the little pellets start accumulating. 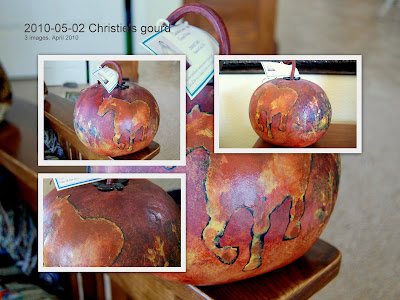 This is Christie's gourd. She was one of the members of my gourd club who donated a decorated gourd to the "opportunity drawing". Her "ticket can" was filled with tickets and the drawing winner went home smiling.
Thanks Christie. It was a beautiful gourd and donating it really helped us out.