Waiting for the Prospector

I was kind of nervous and antsy last night.
I don't usually get this way when The Prospector is gone. I'm not afraid of being here by myself and I certainly don't worry about critters.. the animal kind anyway. I'm not afraid of the dark and I don't scare easily.
But , for some reason, I felt unsettled.  The moon was moving in and out of clouds, casting light on the surrounding hills and then disappearing... bringing darkness and quiet. 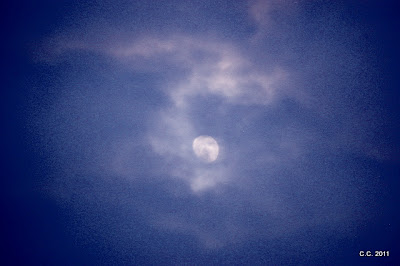 The dogs needed to go outside, so I decided to go with them.  It was a little after eight. I got a sweater out of the closet. It had been a little colder the last few nights. 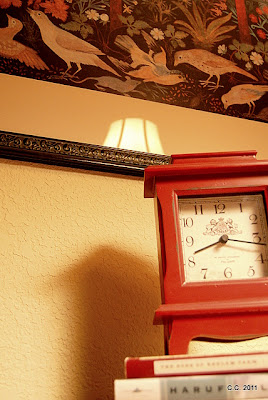 I was taking some indoor "night" shots, earlier, because I love to photograph in this kind of light to see how well I can take pictures in lamp light and how my camera works in darker situations. I saw the lampshade reflected in the painting on the wall and realized that I wasn't really at the right angle to catch this reflection.
So I got closer and higher.
This time I got the right reflection of the lamp where it needed to be... in the picture.I think this is an interesting photo. 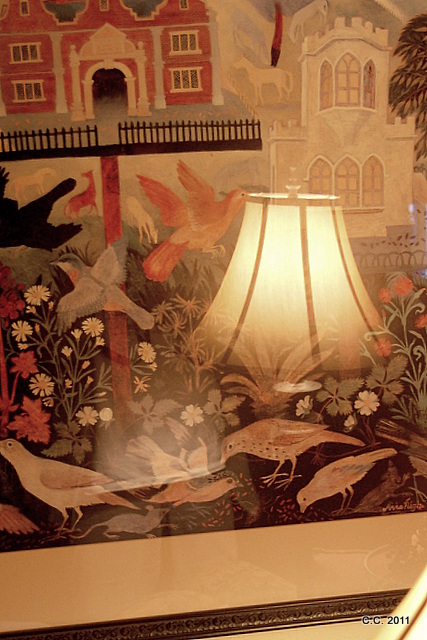 Kind of like a double exposure. I'm in there too. It's not clear, but it looks like a bird is pecking at the edge of my shirt. Interesting shot.
Anyway... the dogs were waiting. I took the phone, my hand gun and the camera... the three things that I take with me everywhere I go around this place. If something or someone is determined to do me harm they will have to come over an iron fence and probably get shot. That's their choice. That would happen before I called 911.
The Prospector has been gone since Monday. He will be here in a hour or so. I'm usually fine with this, but last night I had one of those moments when I wasn't.
I went outside with the dogs to prove to myself how brave I can be. I do this when I'm unsure of things. I walk right into whatever it is that I'm worried or unsure about. It's an old behavior.
I had the huge light over the garage on so I could see quite a distance out into and past the driveway. I took some pictures while the dogs did their thing. I put the camera in its auto mode that takes pictures in low light. I forgot that the shutter would be delayed and I moved the camera a little bit. The photo was still interesting. 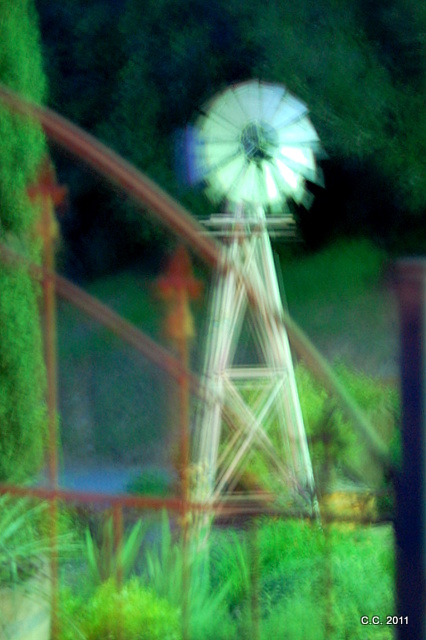 And then, under the photinia... where a small light was back lighting the bush. 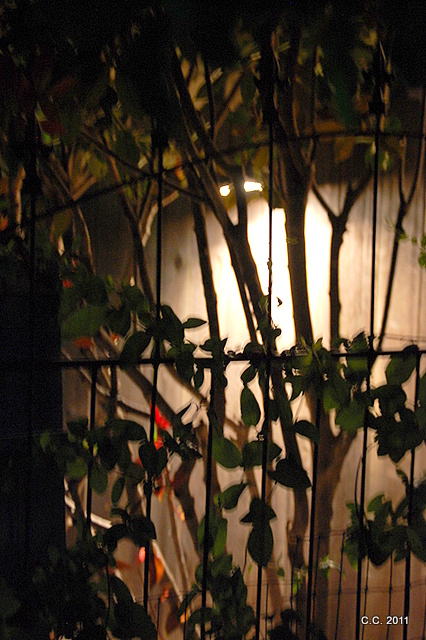 This is the front side of the garage. That BIG light washed everything out at the top of the photo but I liked the Photinia blossoms against the garage wall. 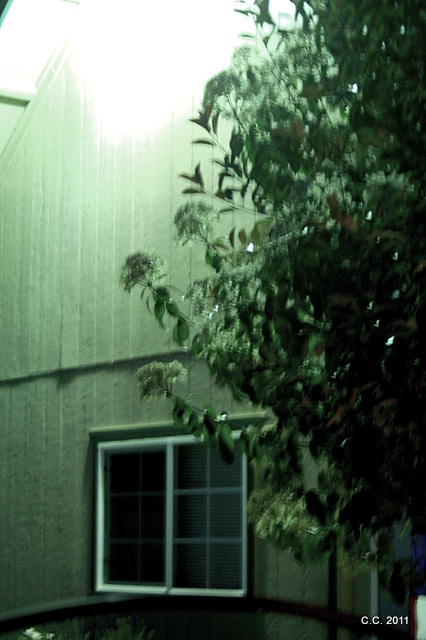 So today, I redid this photo. 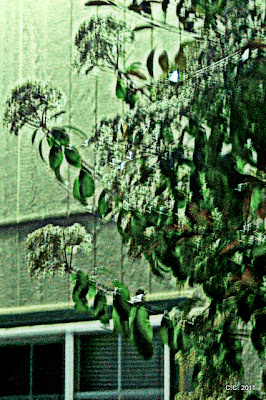 I cropped the photo, lightening it and added some shadow.  Then I used a new Picasa 3 process called HDRish (which means High Dynamic Range) and brought out the details, almost like a drawing. It's fun to experiment with Picasa's photo editors. It's like Photoshop only it's user friendly, easier AND FREE.
If I had used a tripod and was not holding the camera strap in my teeth, and the cell phone in my other hand, I could have gotten a much sharper picture. I like the effect but not the blurriness.
This one was looking back into the house through the front door. 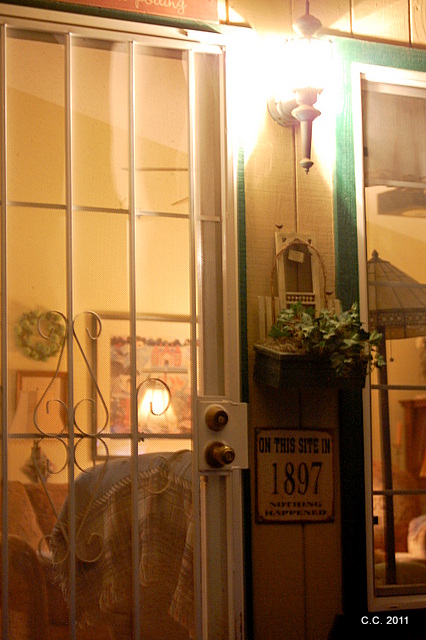 There's that lamp in the painting again, on the far wall. I like looking in from the outside.
I also took a photo of the gun sitting on the porch step. It was cool... but I thought someone might be offended if I posted it. You never know.

The dogs were starting to bark at the "critters of the night" below the vegetable garden, so I called them in. It was probably a deer, but who knows.
We went back into the house and shut the door. I turned the outside lights off and went back to my knitting, taking one more photo of my favorite chair before I settled in for my last evening as a single woman, alone on her mountain top. 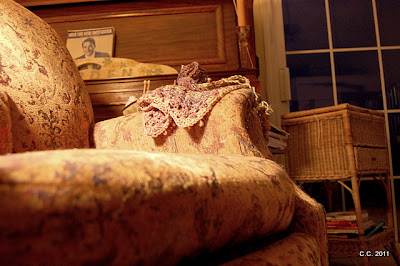 I felt save and secure. Before I went to bed I set my phone on 911 speed dial and put the gun nearby.
The doors were locked and bolted. The dogs were safe in their crates and as I crawled into bed, I heard an owl hooting in the distance. Then, the coyote started their singing on the next knoll. What wonderful night songs. What beautiful lullabies.
It's Thursday afternoon now. The Prospector just got home. I'm so glad he has returned safely.
I made some potato salad and chicken for dinner.
The nervous feeling is gone. He is home and all is well...

"I grow plants for many reasons: to please my eye or to please my soul, to challenge the elements or to challenge my patience, for novelty or for nostalgia, but mostly for the joy in seeing them grow."~David Hobson 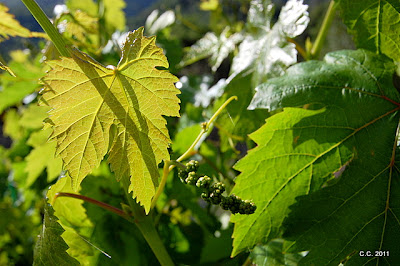 The tiny grapes on this vine are just starting their journey. 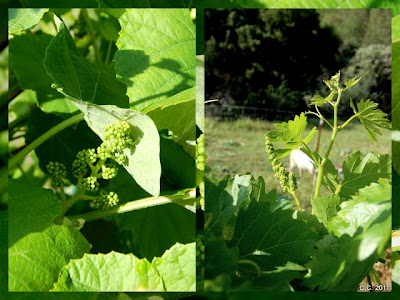 The magical process of becoming. 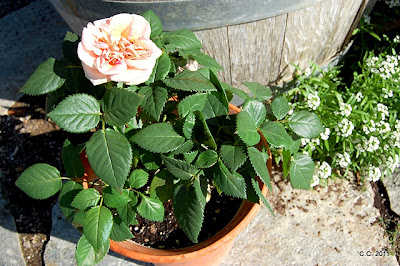 The hothouse rose, a gift from my sister, that I transplanted this morning has one flower left from many... but with nurturing and some good soil. it will grow its beautiful pink, peony-like flowers again and again this summer and remind me of my sister's visit all summer.
Gardens are so wabi sabi in their growth. I like formal gardens, but it is the comfortable, country gardens that are my favorites with their rambling nature and irreverent attitude. 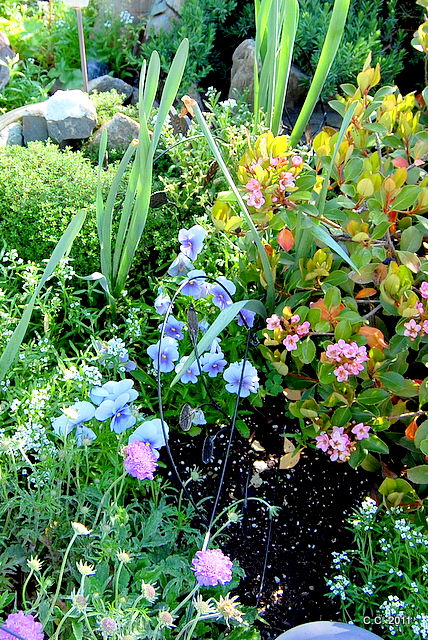 All the flowers seem to get along and each is tolerant of being with the others. 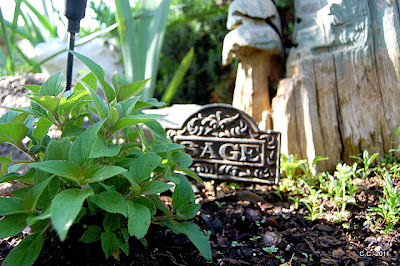 The sage sits next to the chrysanthemum. 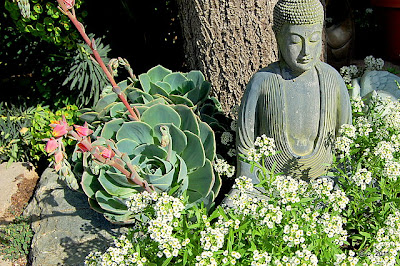 And  the succulent shares a bed with the sweet alyssum and a wise Buddha.


There is mystery at work here. 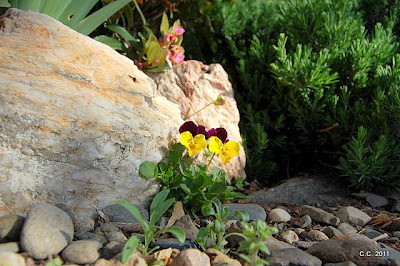 A small viola that grow in the rocks where they were not planted.
I'm not the only gardener in this garden. 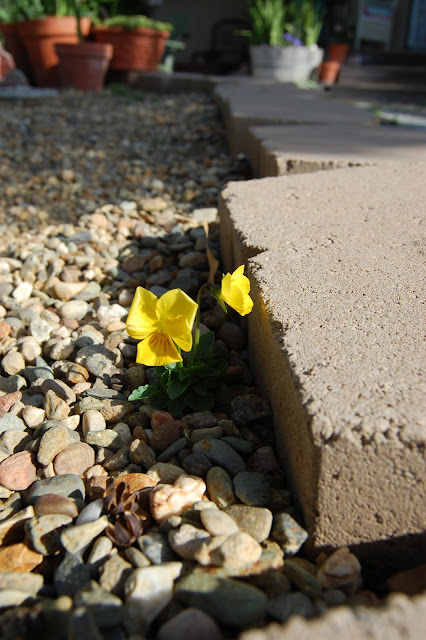 Someone else is rearranging my initial choices to plant a flower in a certain place. The critters and birds that share this garden with me have decided that one of the yellow pansies would look better in the rocks and so it is. 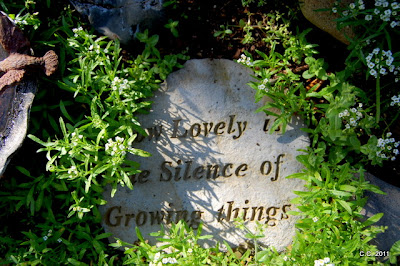 I might call this "my" garden... but it really belongs to many others... The multitude of creatures that surround me while I weed and plant. The saying " It takes a village..." is true.
It takes the pollinating bees, the worms and  the spiders to make this garden healthy. It would be presumptuous of me to take the credit and say that I do all of the work in this place. There are birds that would disagree. There are many helpers here.
I weed, hoe, plant and compost. I plan and create structures... add some garden art. 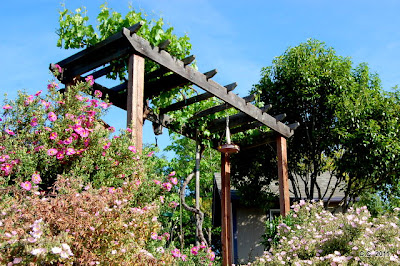 The Rockrose that grows all over the hillside with astounding beauty this time of the year...does not bloom because of me. I planted it, but there are other forces at play. I water... but it takes the sun to make it bloom. 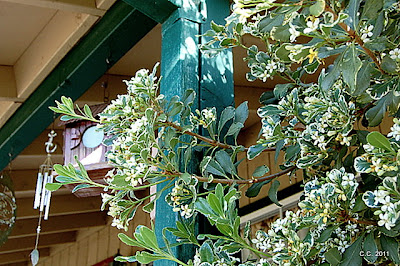 The Pittosporum, near the porch is blooming too. I always confuse this shrub with the Mexican Orange, the Choisya.  I though my mother called this plant a mock orange. I'm still not sure which is which. I only know that it is variegated and  fills the air with a heady aroma.
This garden, that overwhelms the senses in Spring, is not completely of my own doing. I'm more like one component of this orchestra. Without all the various instrumentalist, the sound and the soul of this garden couldn't be played. Every insect, bird and creature is there for a reason. This makes me feel like a grateful part of something amazing and wonderful. 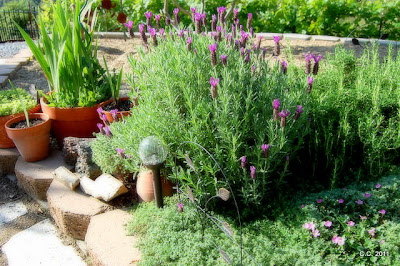 "Everything that slows us down and forces patience, everything that sets us back into the slow circles of nature, is a help. Gardening is an instrument of grace." ~May Sarton

My mother understood this... and her mother before her.
As one of my garden signs says.....
"In search of my mother's garden, I found my own. "~ Alice Walker