When we say, "Do the dogs want to go for a walk with us?", we better we darn sure that we are ready to go, because they know what this means.
We harness and leash them. Then off we go. 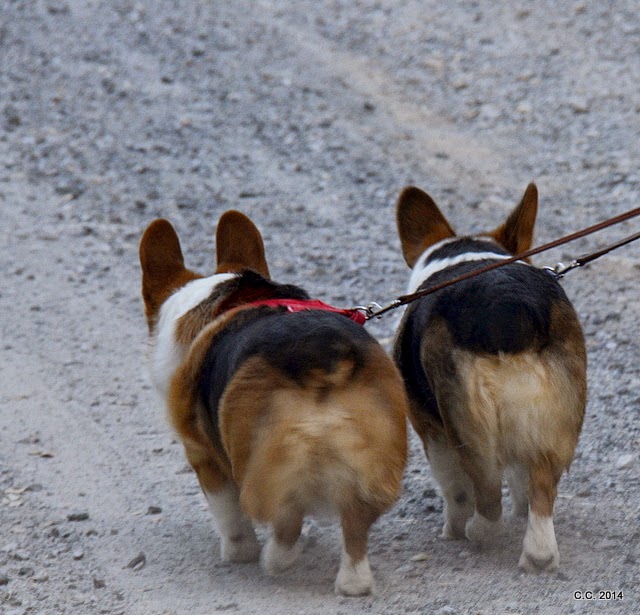 They're are so conditioned. First they stick together, looking up the hill and watching for the deer... a little trepidation about the huge outdoors beyond the garden gate. 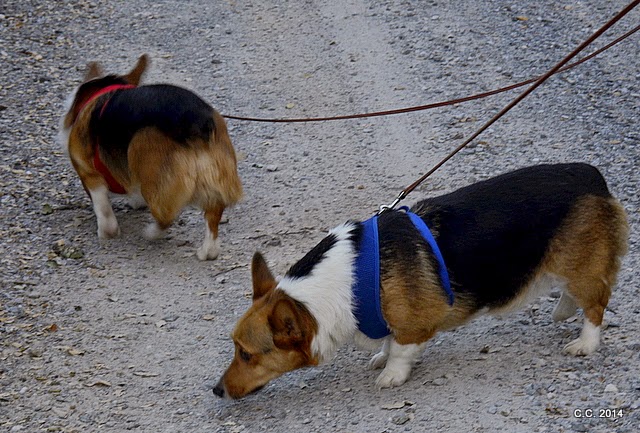 They start to pick up smells... deer poop, bird feathers, coyote scat, fox fur, turkey, rodents underground, snakes and so many other critters that only they can picked up with their amazing olfactory senses. 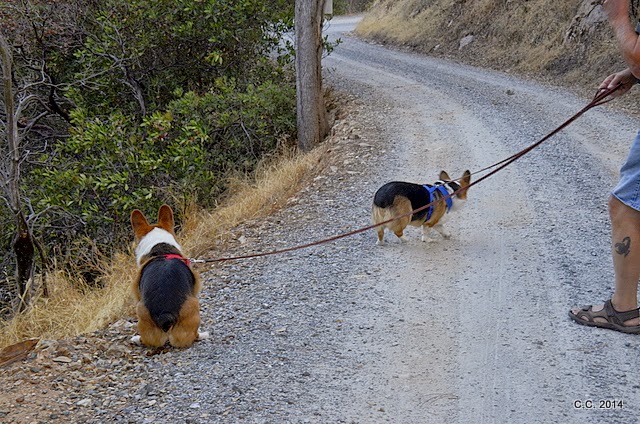 And then, they both have to leave their own mark... and so on we continued, down the road.

This a ritual that they love. I haven't been taking them with me because they pull hard at the beginning of the downhill walk. Since the foot operation, I haven't been able to move at their speed. So, when the Prospector said... you know... those words that the Corgi boys understand... we all went together and the dogs thought they were in DOG HEAVEN. They consider this a great adventure.

The Poison Oak is in its end of the summer doldrums like everything else around here. But, it's pretty when it changes color and the leaves start to fall. 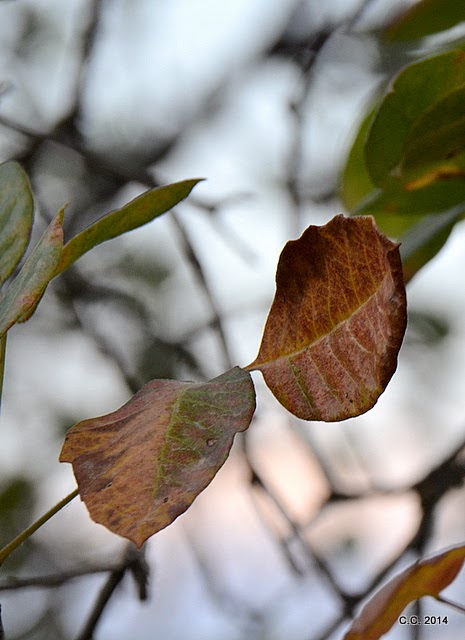 I'm fascinated by this hardy, invasive plant that looms everywhere around here, climbing into the oak trees and spreading into every nook and cranny that it finds. It is a force to be reckoned with. It's just like the rattlesnakes and insects that have a built in survival instinct. It's beautiful but powerful, like so many things in the woods. I have a healthy respect for this plant. It has "bitten" me before.

We continued past the clinging poison oak and walked down to the switch back. We decided to turn around because it was getting darker.
The dogs found the gopher condos on the side of the road. 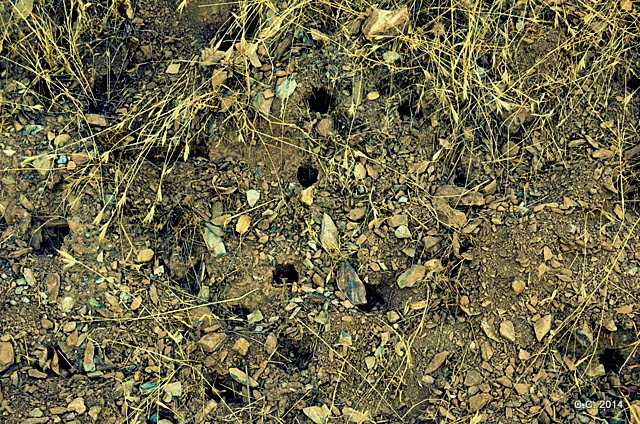 They went nose to ground... and sniffed deeply into each hole.  I'm sure that the snakes use these tunnels too, so I always worry about the dogs noses. We moved on.
The sun was setting making huge thunderheads pink in the distance, as the rain clouds slow moved to the east and disappeared. No more rain for a while... 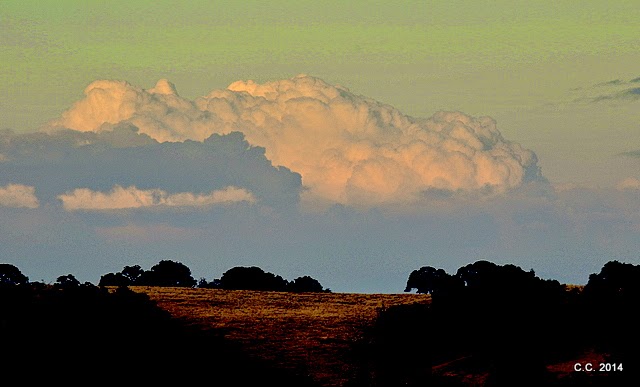 It wasn't a long walk. Just enough for us to stretch our legs and to let the dogs make their joyful noise.

When we returned to the yard, they wanted to run around the garden for a while. This is their domain, their "familiar".
Cutter was tired. He sat on the steps with the Prospector and waited... 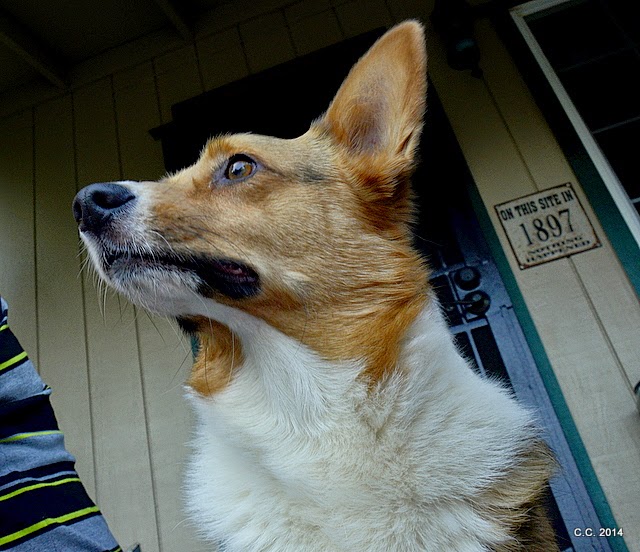 ... for the front door to magically open.  He was still hearing animal sounds in the hills. These are fearful sounds to Cutter. His bravery was gone. 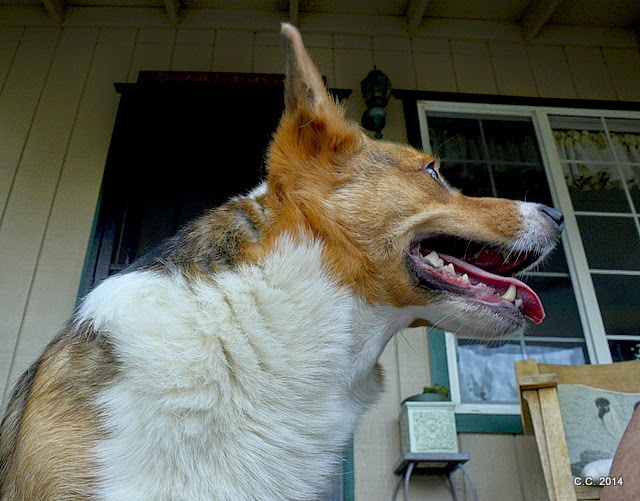 He was ready to lay down in the safety of his house. "Can we go inside please?"

Carl, on the other hand, wasn't finished with "outside". He thought he was at first, but then... He went to chase a lizard who had to audacity to run across the rocks within the corner of Carl's peripheral vision. He didn't catch it and within a few minutes he was back. 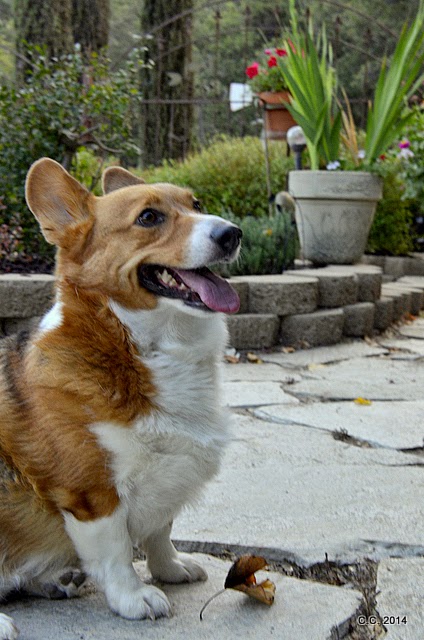 We all went into the house. The Prospector to read a little, the dogs to rest and dream of their great adventure and myself to spend some time at the computer ( way too much time...).
It was a good walk. The dogs were happy.
We stretched our legs and we will sleep better for it.
Outside... it was dark now.
What a difference a few minutes makes.
We were safe inside our home.
Life is good.