Do you see him? 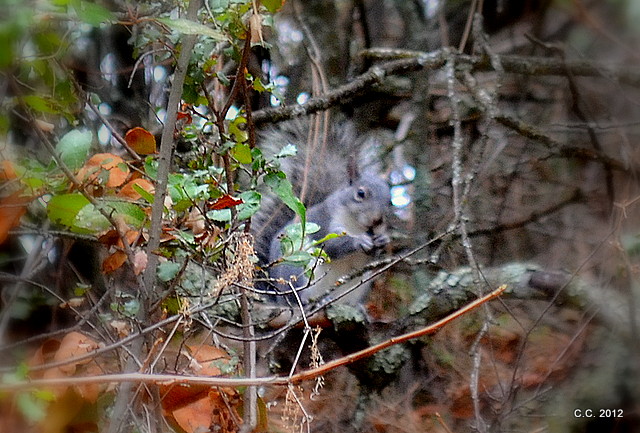 Look closer... between the oak branches, pine needles and the sticks of poison oak. There, only feet from where I stood... this beauty creature and I had a moment. 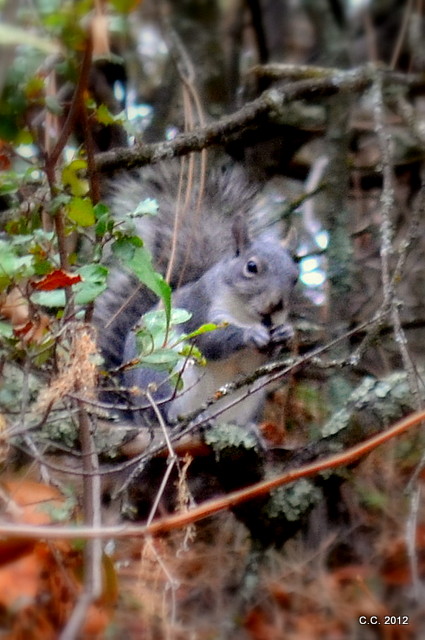 This squirrel was extremely busy finding places to hide its pine nut.
At first, he didn't even notice me inching up on him.
And then he did.

I think this is where the expression, "turn tail and run.", came from. 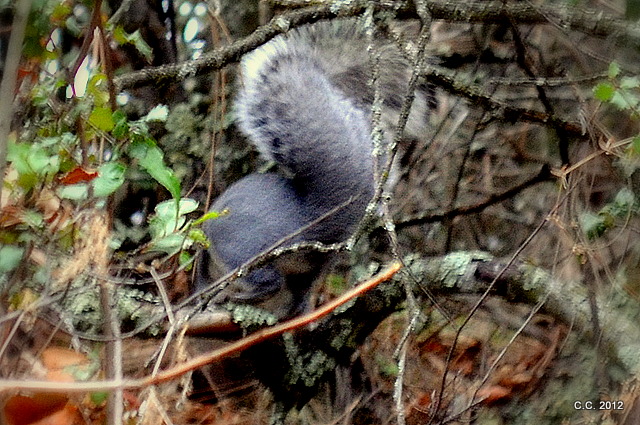 But, before he ran he stopped, dug a small hole and dropped the nut into the ground covering it with the scatterings of the forest floor. 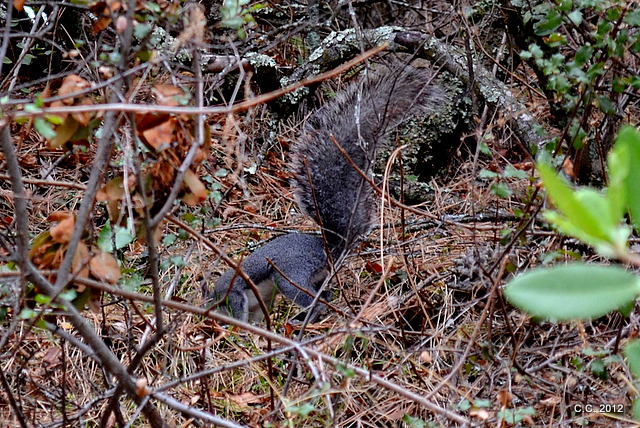 I hope he finds this little nut when he needs it.
How does he remember where to look?
One small pine nut in this huge forest.
I suppose if he forgets where he left it that's OK,
because it will just grow into another Pine tree.
What an amazingly efficient arrangement nature has with those who choose to follow her path.
How man seems to struggle making everything
different, better, more intelligent.
Is there always a better, more efficient way...or does man interfere with the natural order of things?
Is there a compromise?... a truth here?
Do we plant the seeds of understanding  and become confused as to where we left them?
Does the earth take care of itself over time?
Are we all... Waiting for Godot?
Posted by farmlady at 4:36 PM 6 comments:

Labels: Squirrel preparing for winter, Thoughts in the wilderness, using my new camera., Waiting for Godot ( a play by Samuel Beckett) 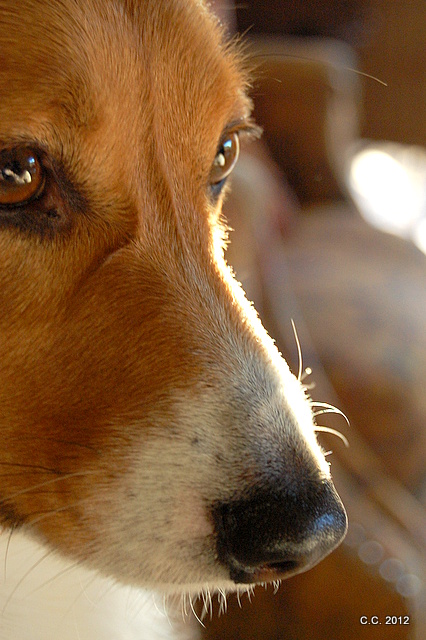 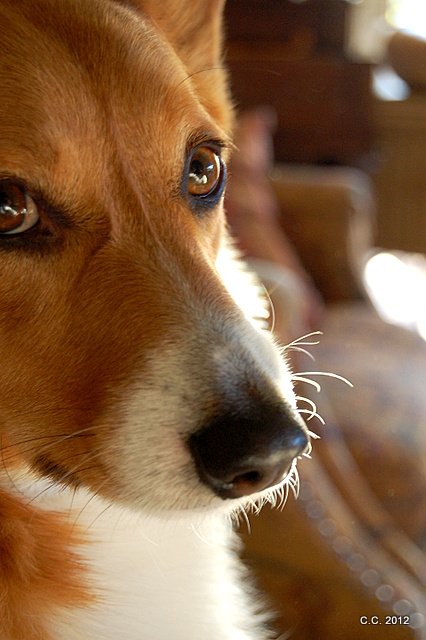 One of those days... 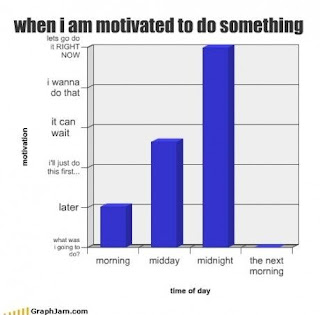 Sorry, it's 10:43 a.m. and I'm right between  morning and midday.
So there will be no earthshaking blog post today. Thank you for understanding.
Posted by farmlady at 10:46 AM 3 comments:

Labels: finding Google images for blog, I've got nothing but housework to do, motivation

As I watched the sunrise this morning, I was thinking about the News report I had just seen concerning General Petraeus and how calloused and suspicious I've become about the "true story", the real facts and the motives of the media and our government to let the people really know what is going on. Maybe we don't need to know everything about the failings of our hero's.
The story changes everyday. There is always a new version and someone else involved... as if the media were writing a good novel. As if they know, ahead of time, that they may be able to sell the screenplay to Hollywood.
As I stood out in my front yard, looking at this rather spectacular morning , I realized that I had lost my bearings yesterday, on the real Veteran's Day, thinking that today was the day to honor those who served.  So I came in and opened our cabinet that we keep "special things" in and took out the large envelope that I keep my POW bracelet in. This envelope also has all the information that the POW-MIA organization sent to me in 1973 on the man who's name is on the bracelet. 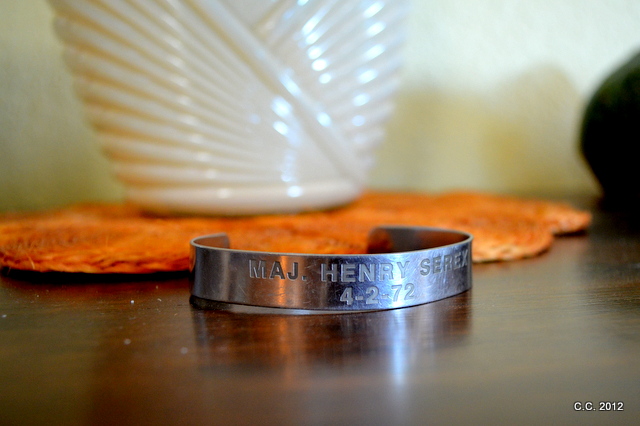 His name was Major Henry M. Serex, He was in the U.S. Air Force. He went missing on Easter Day 1972.

In this envelope are a copy of the post that I did two years ago and other information that I have collected over the years, the return address of his family in 1973 and the bracelet.
The most meaningful addition is the card that I received from Maj Serex's daughter after I wrote about her father and the bracelet on my blog. I cannot say how much this card means to me. 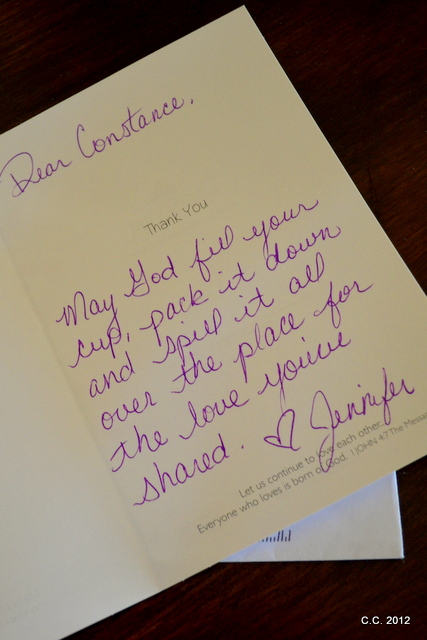 So, because my brain was in another place yesterday...  today, I will honor this man, his family and all the men and women who served, who still serve and who gave their lives to protect our country.
Please read my post, here, that tells about Maj. Serex and his story. May we never forget the men and women who served and came home, the ones who came back but were never the same and those who were never found.
To our son, my father, my great uncle and all others who chose to join the forces and do their duty to our country... I give my gratitude and love. 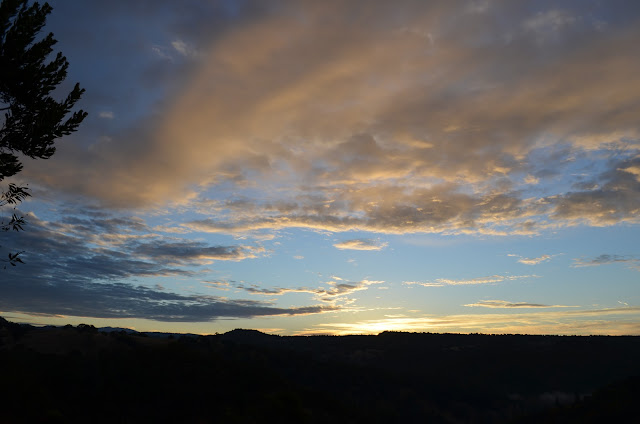 Sunrise over the Foothills of the Sierra Nevada Mountains.
Posted by farmlady at 10:14 AM 5 comments: