Freckles and the Figs 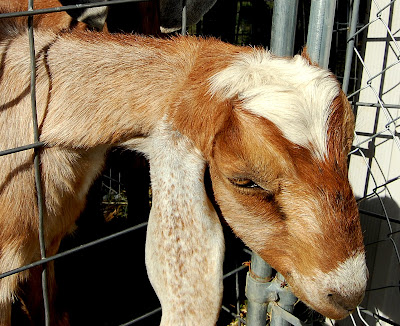 We are going to have a bumper crop of figs this year thanks to Freckles. Our charming goat with the spotted ears has been determined , as all goats are, to get his head through the fence as far as he can and prune one side of our fig tree for us. He not only has beautiful ears but he has a very long , skinny neck and when he is down in the pasture next to the vegetable garden, he takes stretching to a whole new level.
This is Freckles at the fence near the goat house. This fence is what I should have along the garden area because it doesn't move. Freckles sees the green leaves of the fig tree and he gets a glint in his eyes, puts his whole body against the fence, then his head goes through and he leans as far as he can, pushing with his hind feet. When an almost 125 lb. goat, who is determined to have some tasty fig leaves, wants what he sees, there are few fences that will keep him from his self appointed task. 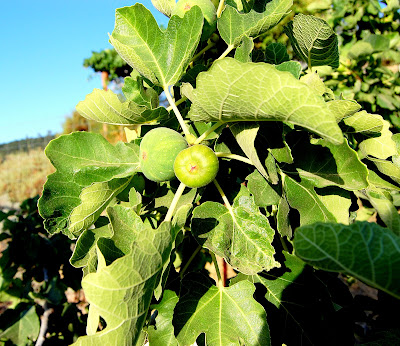 So, on the east side of my wonderful fig tree I have figs growing right out on the end of the branches and why you ask? Because that's exactly the distance that Freckles pruned the branches to. Then the little figs started growing and the fence was reinforced so Freckles couldn't lean through . Well, look at this tree. It's filled with figs. I've never had so many figs on this tree before.
So I'm thinking that Goat Pruning, with VERY controlled and monitored framework, might just be a new business we could patent.Of course Frecks will think that this was his idea in the first place and that he should get all the credit. That's how goats ruminate (I mean think) ya know. Guess I'll have to have a talk with him and see what he thinks...., What? You don't talk to your animals? Are you crazy? 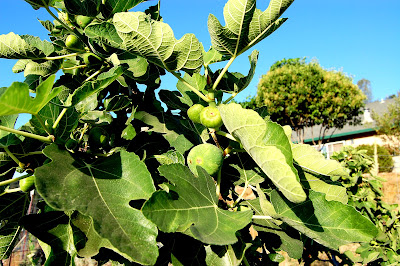 I'm going down to the Bay Area until Tuesday or Wednesday. Sis and I have some business to attend to and I'm going to see my oldest son's new bedroom addition to his house in Oakland and have dinner with him. Now the fun begins with his little house. See you soon. 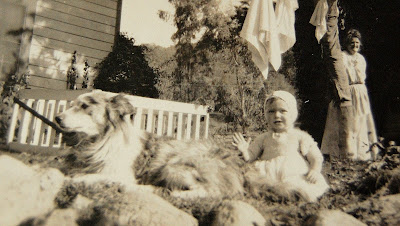 These are three photos of my Mother when she was a small child. The one above was taken on the Ranch in Napa, CA. at 1913 Silverado Trail, just outside of town on the Trancas Creek. She was probably about a year old. That's my great grandma in the background.
Mom and her brother, sister and parents lived in Berkeley but spent a lot of time at the Ranch. Mom's father died when she was 5 years old and her mother brought them back to the Ranch to live. Her mother(my grandmother) went to work as a cook at the State Hospital in Imola, south of Napa and the extended family all helped raise the children. 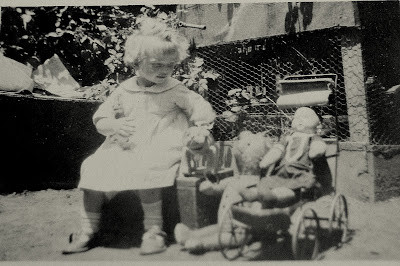 Mom was always ready to care for someone or something as evident in the photo above ,taken around 1920, as she watches over her stuffed dog, bear and dolly. Looks like there was a party going on...., she always loved a party. 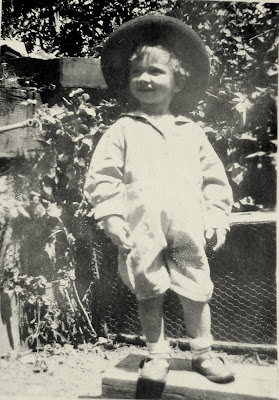 I love this photo. It's so Mom. The stance, the Maryjane's with socks rolled over just so and the hat..., set back on her head so the sun lights her face...,and that smile, oh that wonderful smile. She was beautiful then and she was beautiful throughout her whole life. The beauty was from within..., it was a goodness and a love of life that came through in everything that she did.
I wish I had known that little girl, but I'm so thankful that I knew the woman and that she was our Mom. My sister and I were so very lucky to be her daughters.

What to do with all that Zucchini 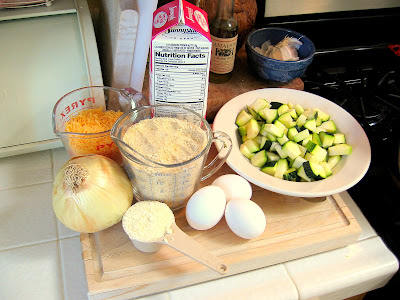 This is a great, basic Zucchini recipe. The prospector found it in the magazine section of our newspaper. There is a bit of preparation with cutting , grating and shredding but once you get it together and clean up the mess, it can be refrigerated and cooked later and that's the kind of dinner I like. If you live in a hot climate, cook it in the morning and serve it, cold, later in the day. 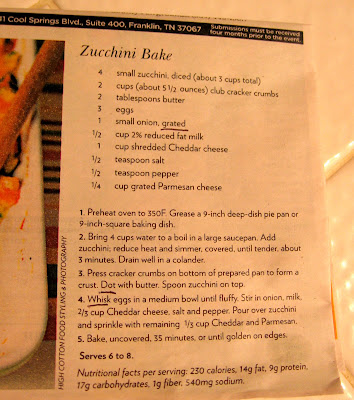 This is a dinner in itself. You can add a pork chop or some chicken for dinner but it's not necessary because this is a very filling dish. If you have it for lunch or dinner with a salad, you will have a really good meal. The recipe is very easy. I did make a few changes though. I rubbed the softened butter into the cracker crumbs instead of just "dotting" the butter on top of the crumbs. It was easier to pat into the baking dish and the butter taste was distributed better throughout the dish. I also use a release spray, like Pam, on the baking dish before pressing the crumbs into it. If you use an 8 by 8 in. pan the cooking time will be longer. 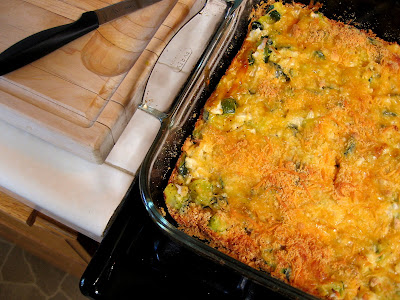 It's a pretty casserole. great for guests..., and delicious. What more can I say except, give it a try.... It also uses some of those amazingly, prolific Zucchini that are growing, like Topsy, in the garden at night. I swear they grow two or three inches while we're sleeping. This dish is best when warm, but we had left-overs the next day and it was good cold too.
This dish goes into my box of "good recipes". Next time I want to try some other spices or different crumbs and maybe some Monterey Jack cheese instead of cheddar. This is an adaptable recipe. The options are up to you. Enjoy!

The wild blackberries are ripening up down near the river. I can taste that pie already... 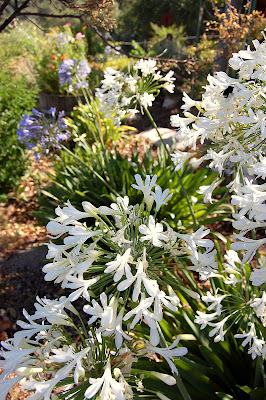 "Wherever you are, be there totally.
If you find your here and now intolerable
and it makes you unhappy, 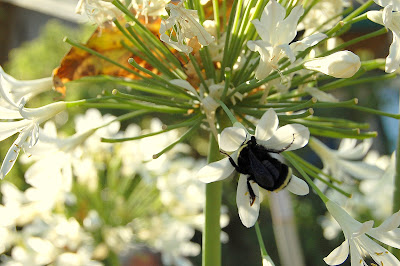 you have three options: 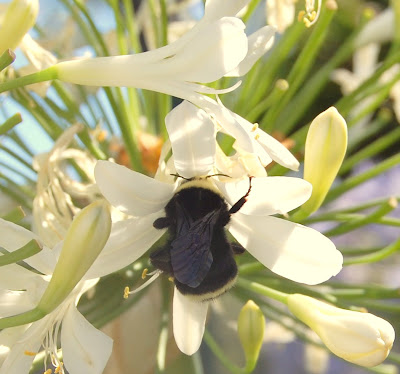 remove yourself from the situation, change it, or accept it totally" -eckhart tolle-