I want you to look at this photo (above) closely. I took it from quite a distance up the road and it's not a very clear picture. It was the end of a really hot day and everything was very still and quiet. I saw movement down on the road near my favorite tree, the old druid, and I walked down a little closer to see what it was. As my eyes focused on the road I stopped and backed up. I saw a snake lying very still, not moving except for small vibrations once in a while. At first I thought it might be a big lizard because it's head was larger than a snakes. It was only about 12' to maybe 15' long. I wondered if we had accidently run over it coming home earlier in the day and maybe it wasn't dead yet. I always watch for critters coming across the road. I should have one of those signs that says "I BREAK FOR ......" you know. Mine would have to say "I break for ANYTHING." because I do. The prospector says that someday I'm going to cause a bad accident because of my inability to drive down a road without trying to avoid every living creature that tries to cross the road in front of my car. I don't find this behavior unusual at all., If I'm going to break for some crazy, jaywalking, risk-taking, " Haven't got time to walk to the corner and use the light" fool, why wouldn't I stop for some poor, innocent Tarantula looking for love in all the wrong places. Some people just need to get their priorities straight.
Anyway, back to the snake... I walked slowly down the road toward it, thinking how badly I was going to feel if it was dying because we ran over it. We have had so much snake killing this summer that I just couldn't take one more....., and that's when he lifted his head, switched his tale at me and said, "Chee,chee,chee."
That darned squirrel was just taking a rest in the middle of the road. I took a picture just before he stretched and jumped into the dry grass and flew up the side of the Old Druid. I had been decieved by a squirrel. I'm surprised that he didn't have a little lawn chair and some iced tea. He was all spread out like he was getting a suntan at the beach. I think I'm the one who needs a vacation.

I think this should be a day of peace, quiet and honest reflection. 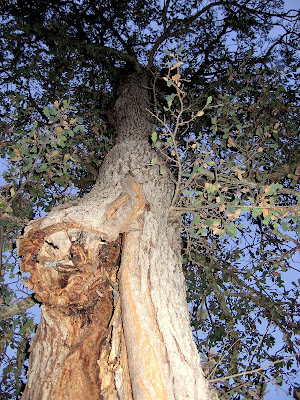 I took both these photos of the old druid last night on my walk down the hill. One with a flash and one without. Look at the difference! I tell you: This tree has something going on that has always seemed altered in some way. I know that Halloween is coming. I know that I've been emersed in Halloween decorations for my gourds, but the contrast between these two pictures is amazing to me. The weather is changing and there is a different sharp edge to the evening fragrance of early Fall. I'm drawn away from what it is that I have to do and I'm drawn out into the wonders of this new season that speaks to me of change. I loose my focus and my favorite old oak tree is playing Hocus Pocus. 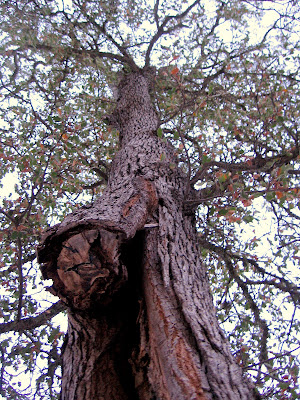 I had a wonderful surprise today. On Saturday we got a slip in the mail box that said we needed to pick up a package at the post office. So today, I went down and picked it up and what a surprise it was. Terry Busse (at terrybusse.blogspot.com) 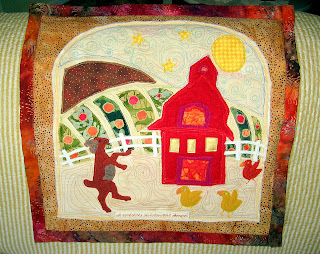 sent me the fabric art work that she had done about my goat Murphy. I was so pleased that she wanted to tell his story about the night I caught him dancing. It was a full moon night and he was up on his back feet entertaining the other goats. When I wrote the post about him dancing ,Terry emailed me and asked if I would mind if she did a fabric piece about Murphy dancing to the full moon. I said yes, I'd be honored. She told me that she was having a show at the Davis Art Center in August and "Murphy's Midnight Dance" was one of the pieces of art that would be hung there. Murph' has definitely had more than his 15 minutes of fame because of all of this.
I was able to go down and see the show. It was wonderful! Terry is so talented. I mean there is quilting and then there is quilt art and I'm in awe of what she can do .

I can't begin to thank you enough, Terry. Just know that I will treasure this piece of art and take good care of it. We won't be able to live with Murphy for a while but that's ok. I'm sure he will be wearing sunglasses and struting around here like a big shot, but we can live with him acting famous for a while because...,well ..., he is!! Thank you so much. 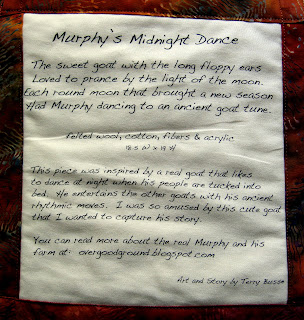