Wishing for something amazing...

The new fig tree is loving this hot weather. 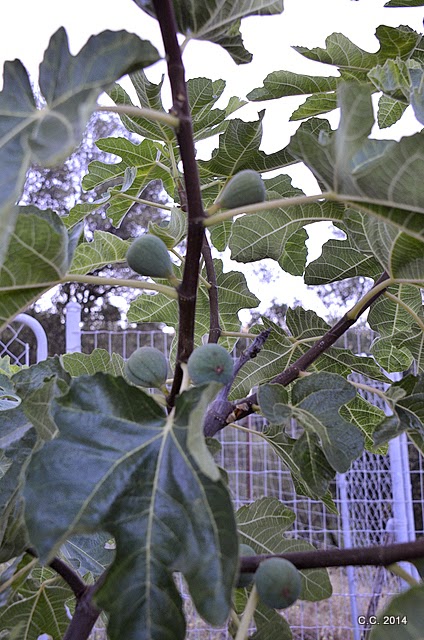 And if some critter doesn't eat the figs before they ripen, we should have a good crop this year. 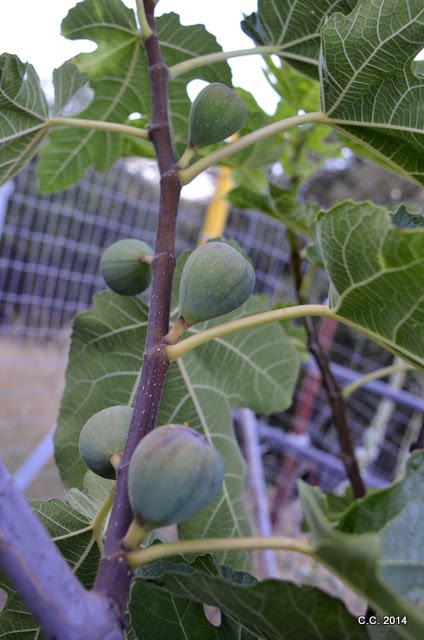 So far so good.

It's hot. The chickens are going around with their mouths open. This is when we need to be sure that there is plenty of water for them. The wild birds are sharing the birdbath and find shade during the hottest parts of the day in the trees and bushes nearby.
Carl caught a sparrow the other day.It was near the fence under some bushes. I think Carl was surprised to find that he had actually caught it. By the time I pried it from his mouth, it was dead. He was going to eat it. He was very unset that I took it away from him.

I had been trying to get some shots of our newest members of the community. We have a mother deer that comes to the watering container every evening. she has two babies that she is very protective of.
Usually, she comes down by herself and drinks... then at some point she lets the babies come down too.
But, the minute she sees me,  as if they have some sort of pre-arranged warning worked out between them, they disappear into the trees.
Mom always stands her ground and likes to give me "the look"... 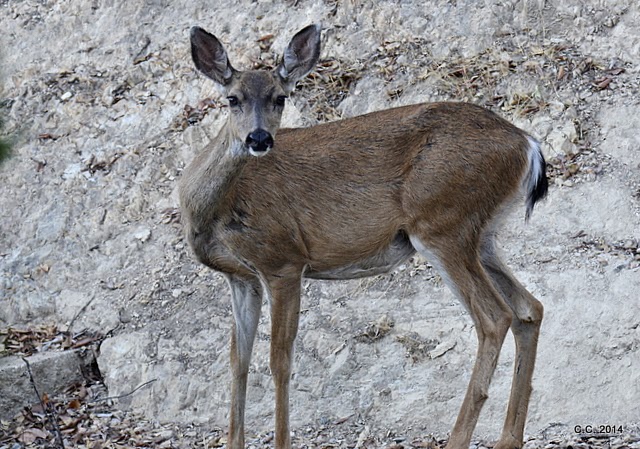 As if to tell me that I need to keep my distance.
And then she slowly leaves too... 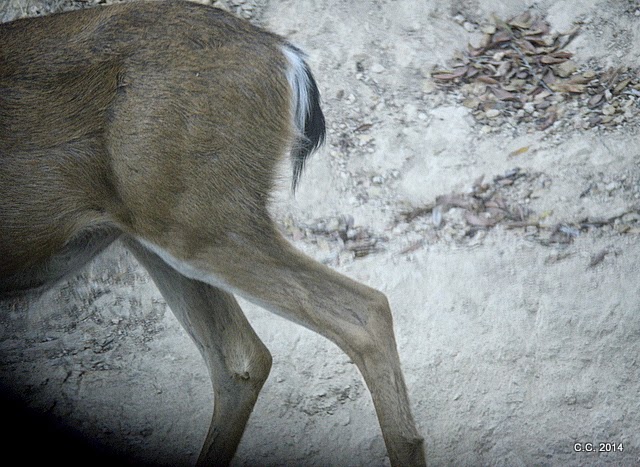 And I get the tail end of her as she slowly walks away.

Well, a few days ago.... I went out to feed the chickens and close them up for the night. I looked down toward the driveway and there were the deer... all looking at me.
I returned to the house for my camera and when I came back outside, they were still there.
Miracle of miracles.
I finally got these photos of our cute, little spotted visitors. Mom must have said something to them because, all of a sudden, they looked at each other.

One of them looked up the hill. The other kept staring at me. 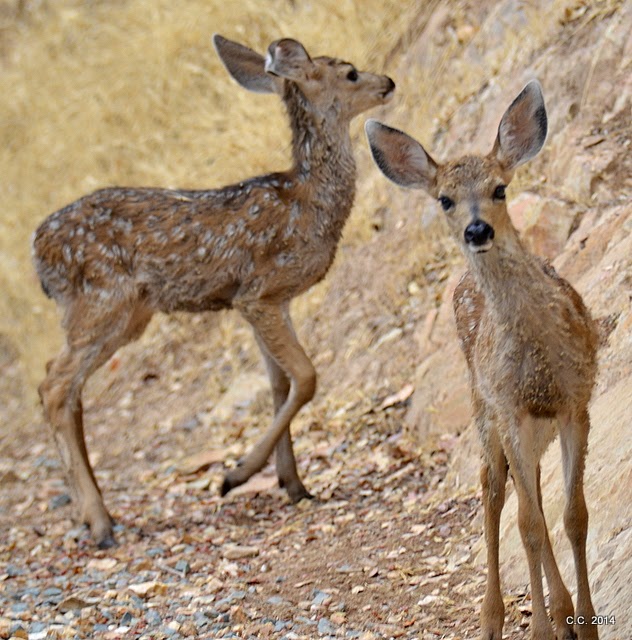 Then one bolted up the hill and the other followed right behind
. 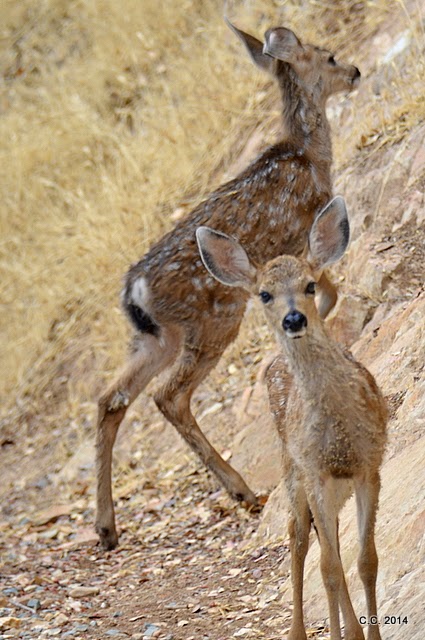 The response was orchestrated and without hesitation... and then they were gone.

But, I now have some images that I'm happy with.
They come back every evening to lean through fences and  reach into my garden. The pile of garden clippings has been rifled through by morning and the deer scat abounds.
Such beautiful creatures.  I wish I could touch them. Walk up to them and look into their eyes... to let them know that I'm OK, that they don't have to fear me.
But, it's a good thing that they are fearful. Death is always close. I hear it at night... when the coyotes kill something and howl their victories on some distant hill... and... there are all the other predators that own the hills from here to the river. I fear for these lovely creatures, especially at night. I'm reminded of a favorite Mary Oliver poem called

This morning I watched the deer
with beautiful lips touching the tips
of the cranberries, setting their hooves down
in the dampness carelessly, isn’t it after all
the carpet of their house, their home, whose roof
is the sky?

Why, then, was I suddenly miserable?

Well, then, this is nothing much.
This is just the heaviness of the body watching the swallows
gliding just under that roof.

This is the wish that the deer would not lift their heads
and leap away, leaving me there alone.
This is to wish to touch their faces, their brown wrists-
to sing some sparkling poem into
the folds of their ears,

and into the impossible trees.

( From Mary Oliver's book, Why I Wake Early.)

I have to tell you about the most fun I have had in a long time. When I went down to see my family on the 4th of July, I spent that Sunday evening at my son's house. We had dinner, spent some time in the garden... 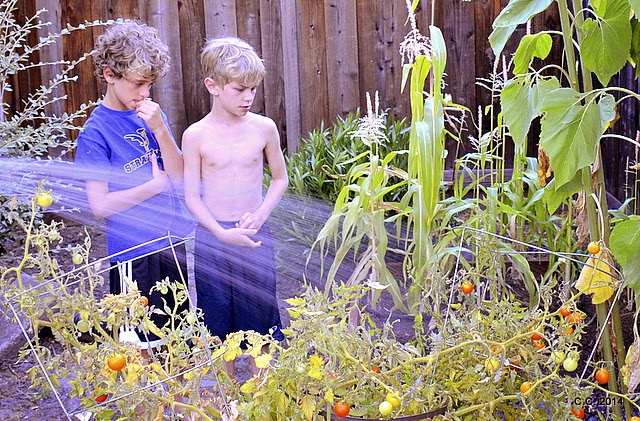 looked at the sunflowers and marveled at how tall they grow. 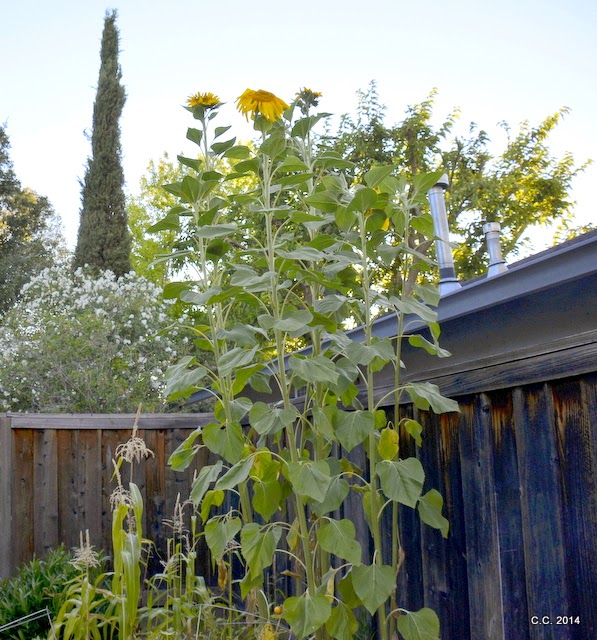 and then while we ate strawberry shortcake for dessert, I was taught how to play a game called Apples to Apples. 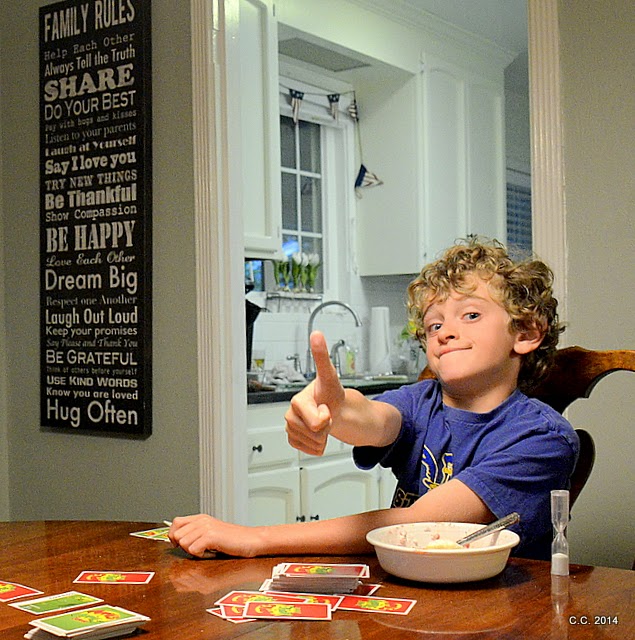 The Beans showed me how to play and what to do. I guess I was a fast learner because I got the thumbs up from my oldest grandson.
I gave the camera to my daughter in law and she took these photos of our progress.

Little Bean needed some help with a few words that he didn't know... so we did some teamwork on the side. I would whisper in his ear what the word was  and sometimes what it meant. 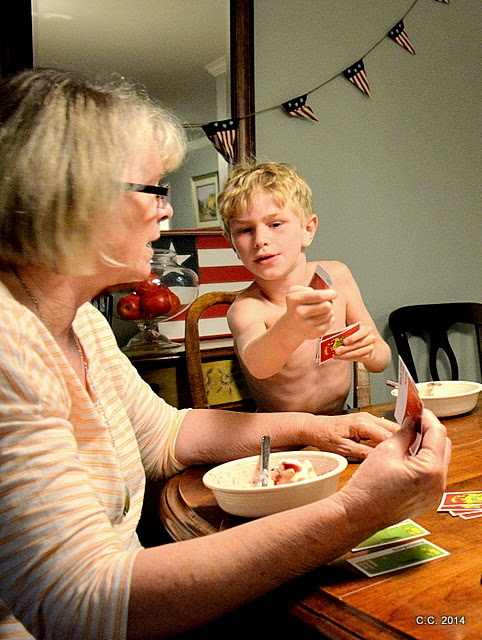 This is a game of synonyms. A card is laid on the table and it might say "beautiful". The players all put one card in the middle of the table that they think comes the closest to being a synonym for "beautiful" But, because the cards were randomly given to you out of the deck, you don't always have a card that works and that's when it gets funny. You have to put a card down. Sometimes you have the perfect card, like "stunning" or "the universe" or "mothers"... but sometimes you only have " Mashed potatoes" or "motor oil" and that's all you have to work with. One designated person (that was me.) had to decide which came the closest to "beautiful" and who gets to keep the "beautiful" card. The person that ends up with the most cards wins the game.
Once in a while I would have two cards that were not even in the ball park as a synonym for the first card. That's when I had to decide which one was better than the other.
So they waited for me to read the choices... 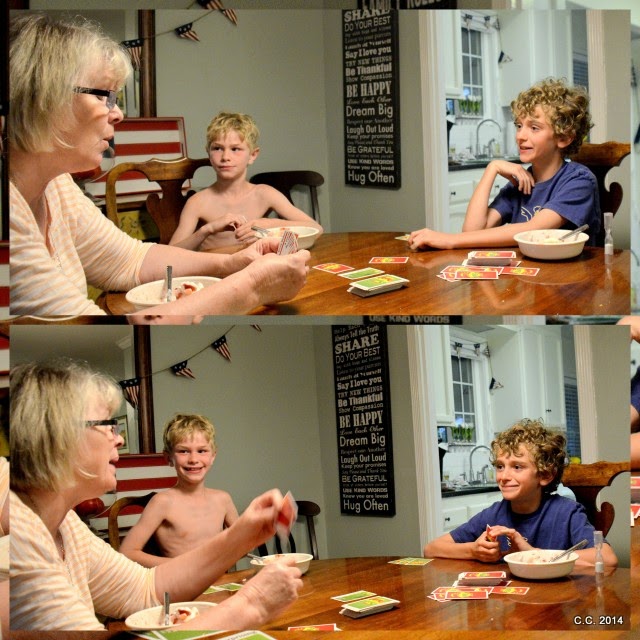 .. which were sometimes so bizarre that I would have to repeat the original word and read them all the synonyms that they put on the table. I would read them out loud, trying not to laugh.
Then, we would all crack up, when the closest synonym to "snake" was not "slither", or even "scary", but "bologna sandwich".
We would all laugh ourselves silly... and then have a short round table discussion about what a "snake" sandwich would taste like. Maybe you had to be there, but I haven't had this much fun in a long time. This is what grandkids do for you. They make you a kid again, if you don't let "being an adult" get in the way.
What a wonderful evening it was.

This is Stella. she is a German Shorthair Pointer and she's a most beautiful dog. My sister has adopted her from the Tony LaRussa Animal Rescue Foundation. (http://www.arf.net/)

Listen to her, in her own words... 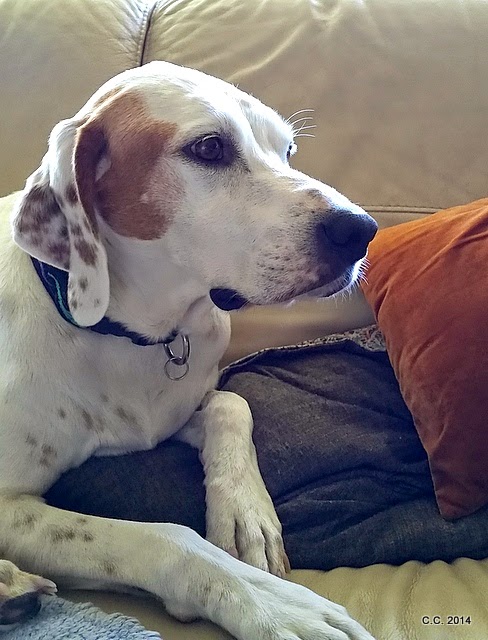 "I'm learning my new name. It's Stella. I have had other names but I like this one best. Now,  I have a dog friend named Fozzy to play with and a good family that thinks I'm a wonderful dog. I am.
I have a big backyard to run around with Fozzy and a place to chase birds.
I can't tell them my story, but they don't seem to care because they picked me and their love is unconditional. I'm just glad to be here."

I have some medical issues that we are working on and the vet thinks I'm about 5 or 6 years old... maybe older. 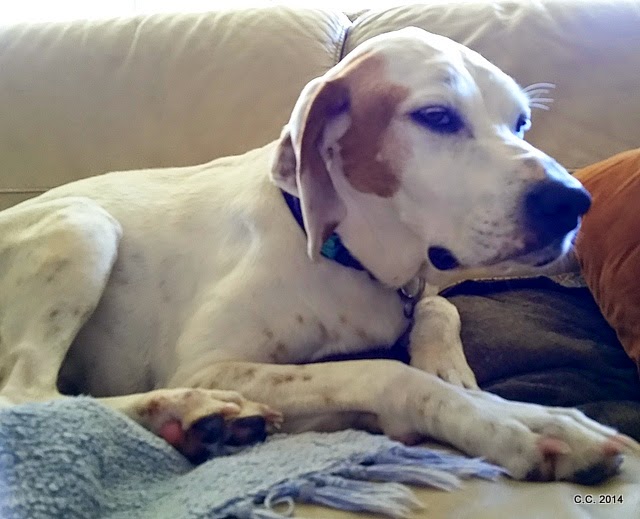 "On the 4th of July, my mistress had a party. The whole family was here. It was fun.  Her sister came too. She has a camera that she takes pictures with... all the time. I can't seem to find a place to get away from this lady... and now she has a camera in her phone, so she acts like she's making a phone call and then takes my picture."

"I was getting tired and wanted to take a nap. This lady was still there taking pictures of me and I had a hard time keeping my eyes open." 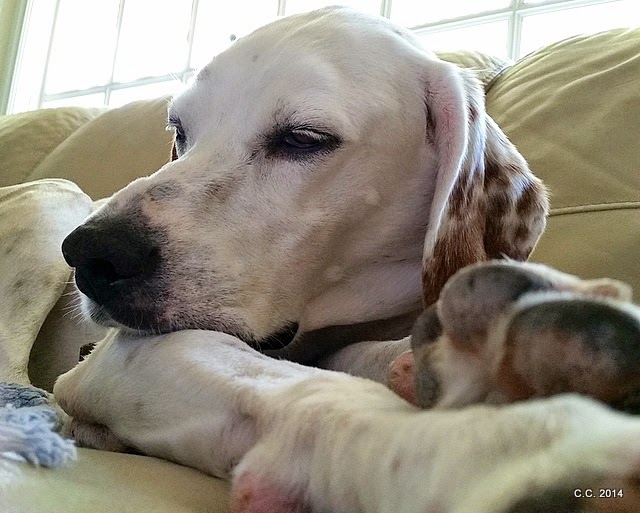 "Finally, I decided that enough was enough and I hid my face behind a pillow. She got the message and left me alone." 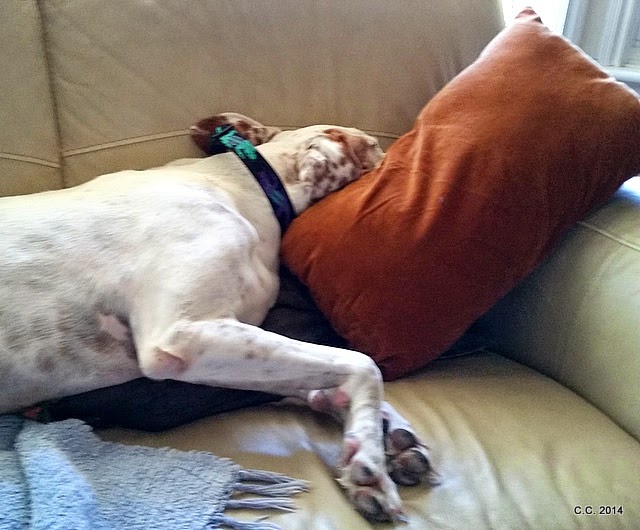 "I love this place."


( Stella is a beautiful dog. My sister and her husband are so happy with her. Fozzy enjoys having another dog to play with and they seems to be very compatible. Fozzy is a poodle mix... with an attitude. He's a character. He always looks kind of above it all and sometimes carried an annoyed expression around with him... but he is so happy to have Stella there. Dogs love being with dogs and the two of them are becoming good friends.)

Save an animal... ADOPT.


**************************
This post is dedicated to a dog named Daisy. My sister-in-law, Carol, lost her dog this weekend. Daisy was a sweet old lovable dog who was fighting Cancer and finally had to leave us.
Daisy will find her master Jack, over Rainbow Bridge, where he has been waiting for her. Now, she can keep him company and they will be together forever.
We love these dogs so much. They become a part of our lives. What a gift each one is to us. I think that they are sent to teach us about the goodness in life and unconditional love. They come to us with joy and sit by our side in our sadness. They are the beautiful, mute "guardian angels" in our lives.
RIP Daisy. Your pain and suffering is over. We all loved you. Goodbye, sweet dog.
Posted by farmlady at 9:14 PM 4 comments: