I'm slowly learning the secret of people who love the ocean. It involves spending enough time being there to 'walk in its shoes' (sandy shoes, but shoes none the less.). It's about the repetition of sounds and the beauty of birds. It's about the light that you only see at the end of the land.
Even Carl took notice and had to say something about it all. 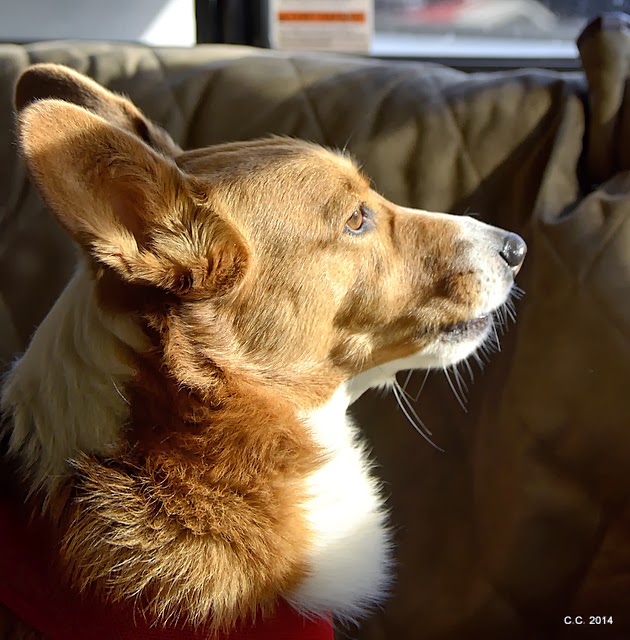 We left Bogega Bay on Thursday, last week. We said goodbye to our friends and headed south. 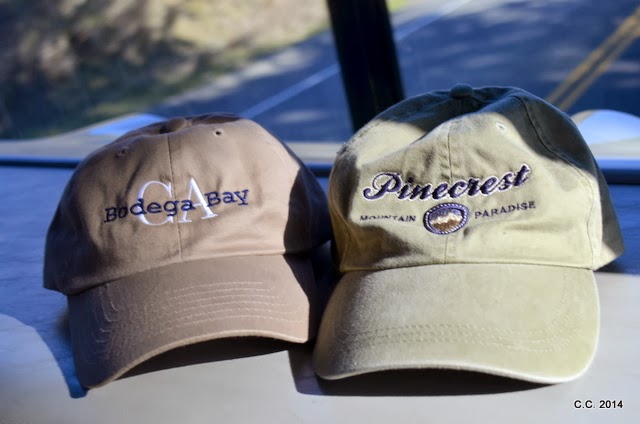 We drove to Dillon's Beach and they returned to the mountains. We spend four days eating good food, driving up the coast, going to art galleries and tourist traps, walking dogs and generally having a good time. We ate lunch at the TIDES restaurant which was surprisingly good but very expensive. It looks very different that it did in the Hitchcock movie called THE BIRDS...but nothing caught fire and no birds attacked us. 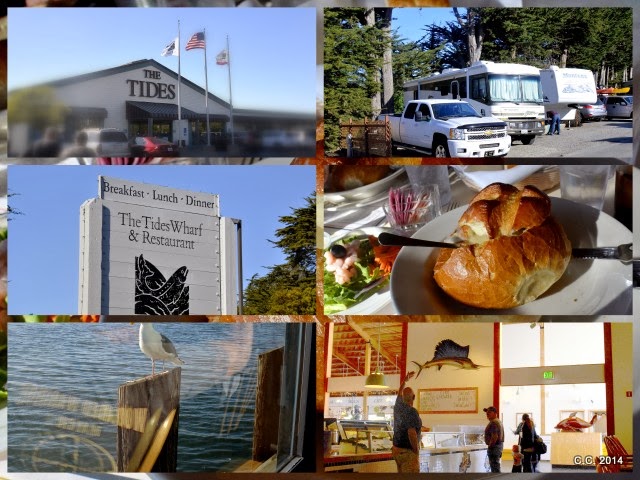 The Prospector has been waiting for clam chowder for quite some time and it sounded really good with a salad... so we both had some. It came in a small, scooped out loaf of really good french bread. It was delicious.
We had a good laugh at a seagull who invited itself to lunch with us. We saw him through the window. 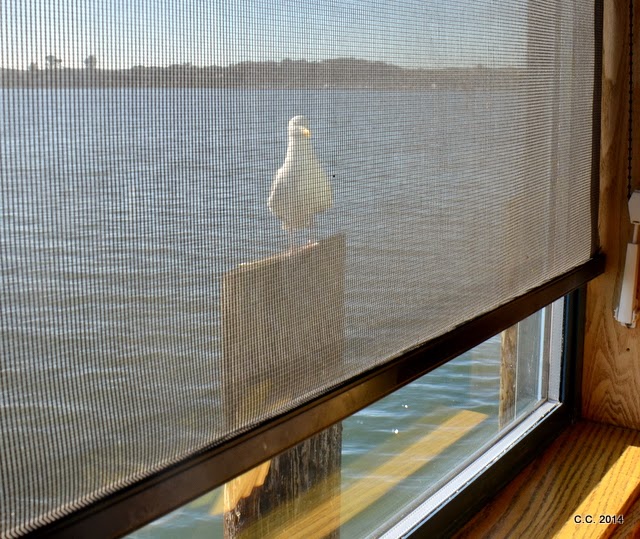 Poor, beautiful, starving bird... he just sat and stared.
and then, he really putting on a show for us...He posed. He smiled and did a little seagull dance. 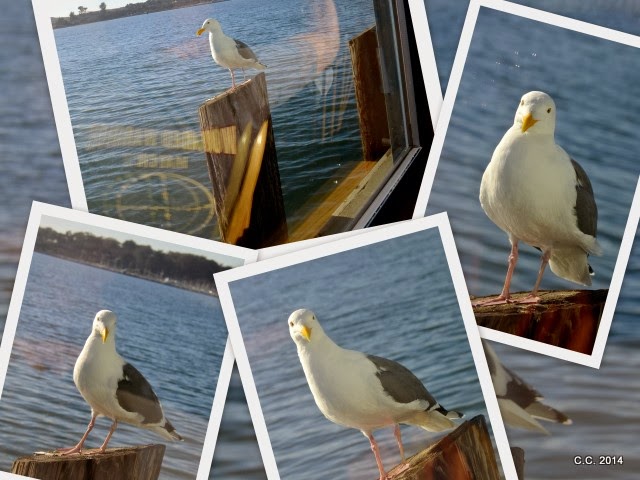 The window didn't open, so all his efforts were in vain... but he was great entertainment for us while we ate. He stayed there during our lunch and left as soon as we got up to leave. Sorry bird.
I learned, from my jewelry making friend while we were still in Bodega Bay, how to do Kumihimo. Do you know what this is? It's an interesting way to make cords for jewelry. (I will do a post on it later.)

So, like I said, we drove down to Dillon Beach and into Lawson's Landing, at the entrance to Tomales Bay. We went from full hookups to Desolation Valley. 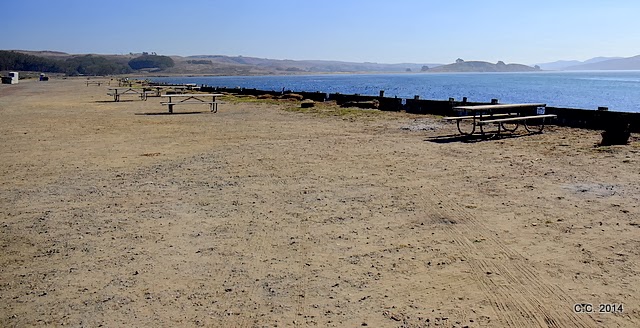 We went from clean bathrooms with hot water, heaters, lots of company and other RVer's, dog play yards and tall trees and the 49er game ( I didn't mean to mention that. Sorry)... to pit toilets and NOBODY. It was a bit of a let down, even though I had been here once before.
I remembered thinking about that popular Albert Einstein saying , "Insanity: Doing the same thing over and over again and expecting different results." We had no car. This was a long way from Dillon's beach or any other place. It's kind of a rundown... no... let's be honest...UGLY campground. We had been here before... and here we were again.
But the Prospector said that it was the best way to try out all the bells and whistles on the RV with the generator...and besides... he didn't buy all the "crabbing stuff " to have it sit in the garage at home.  No crabs in Jackson, CA.
So we stabilized our "home away from home", took the dogs for a walk and then I watched some sea gulls doing what seagulls do. 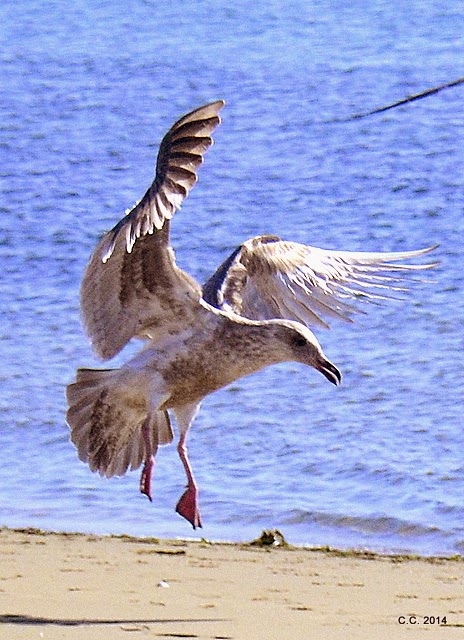 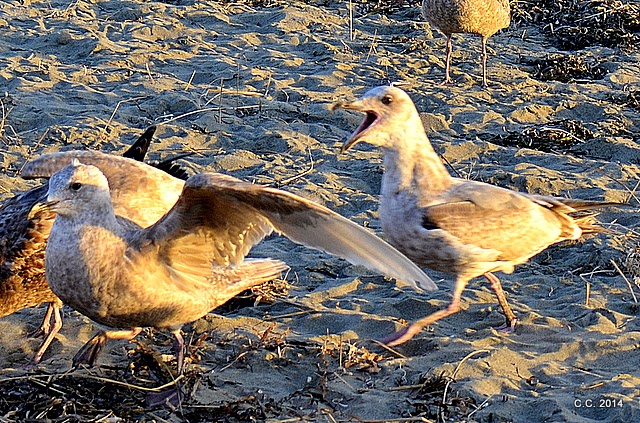 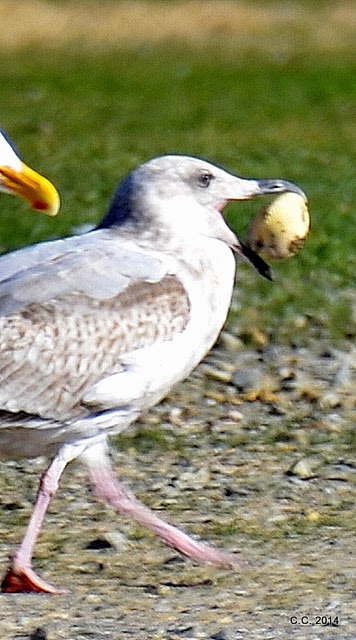 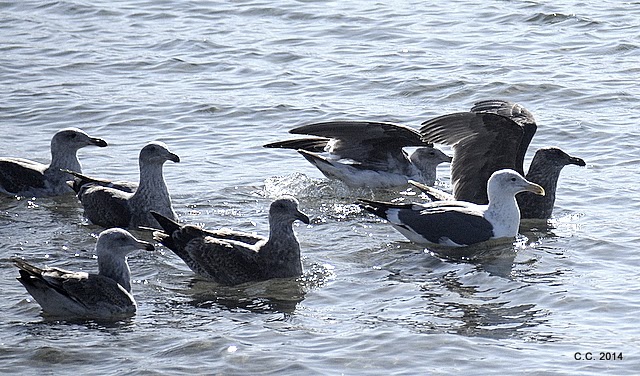 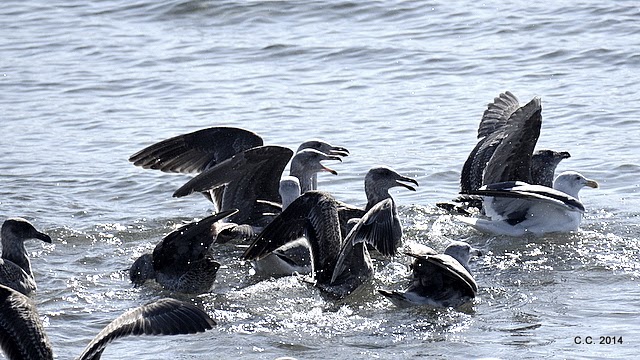 (Kind of reminded me of some humans.)

Then...
I saw this old seagull, who was kind of separated from the others. It was hanging near the seawall just on the other side of our "campsite". 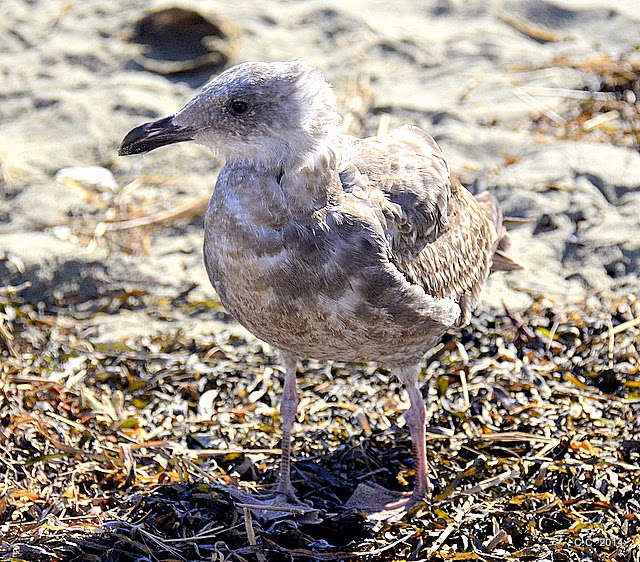 It had the look of wisdom and experience. It was facing into the wind rather boldly.
By evening, the seagull was still there. That's when I decided to give it a name. I would call it 'Bird with twisted foot'. His left foot was always turned in and bent a little. This didn't seem to restrict his ability to get around or fly, but it gave him the sympathy factor and it worked. I wanted to take him home with me.
He was a seagull with a story. I could tell that his eyes had seen many things.
It turns out that this must have been his spot, because he was there the whole time we were there. He would leave and fly to different places, but he always come back to his place near the wall, in front of our RV.

He was a bird apart. 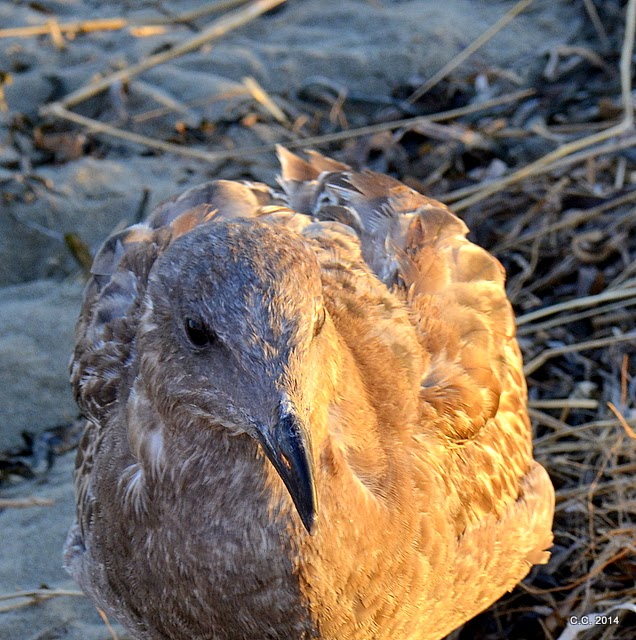 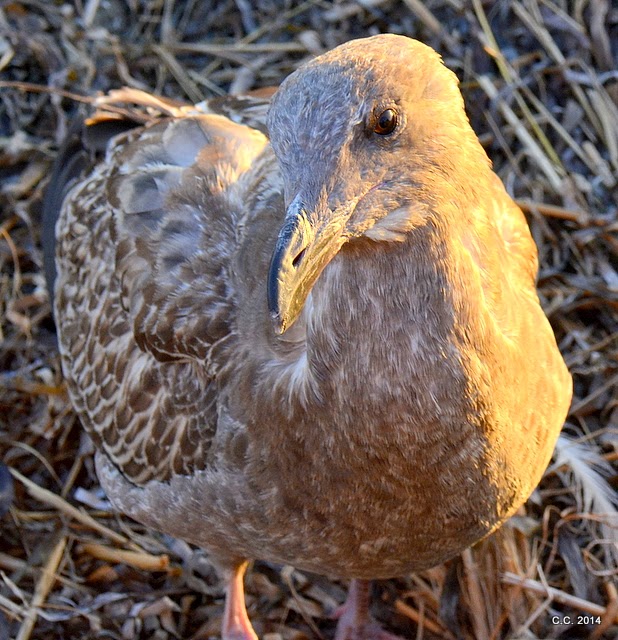 I would learn to love this desolate and wild place where the bay meets the ocean. I would find out why this bird choose me to communicate with and what it had to say.
'Bird with twisted foot' was going to teach me something.
All I had to do was listen.

Wordless Wednesday: I know... a week and a half later. I've been beachbuming. 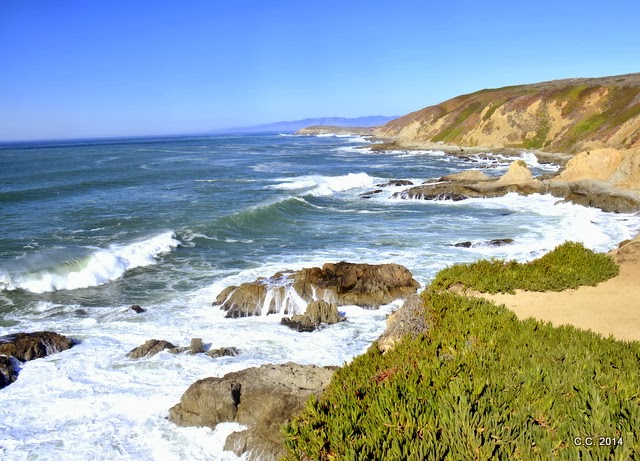 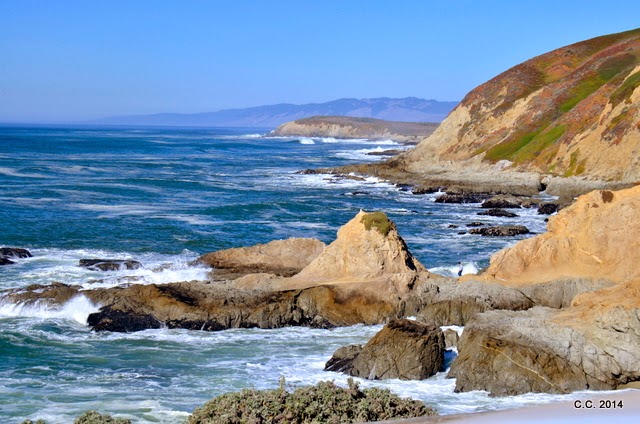 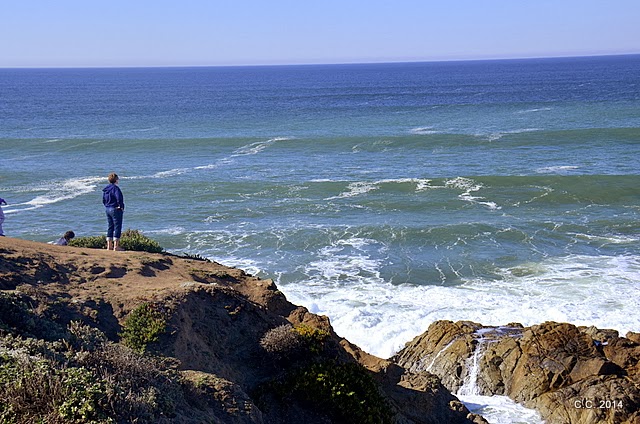 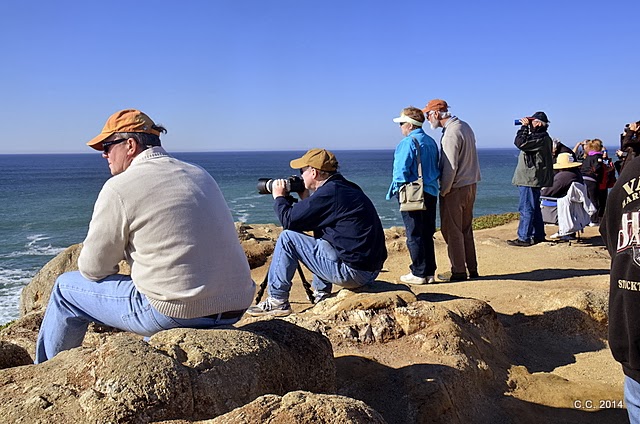 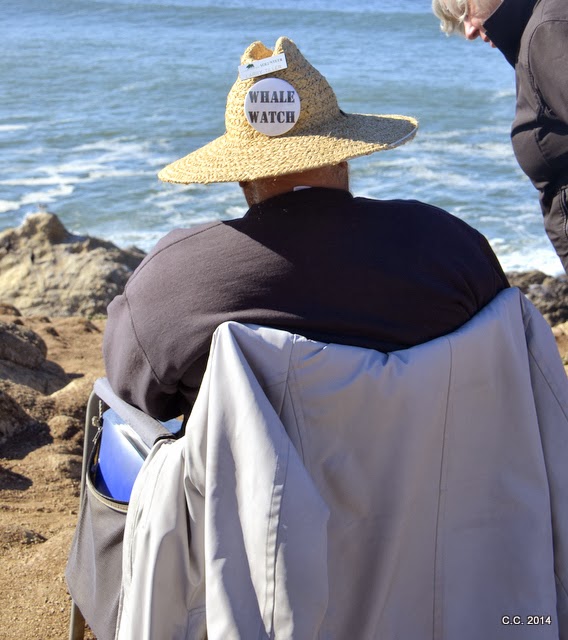 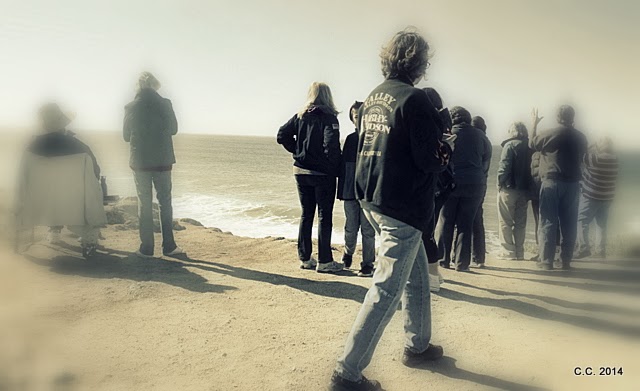 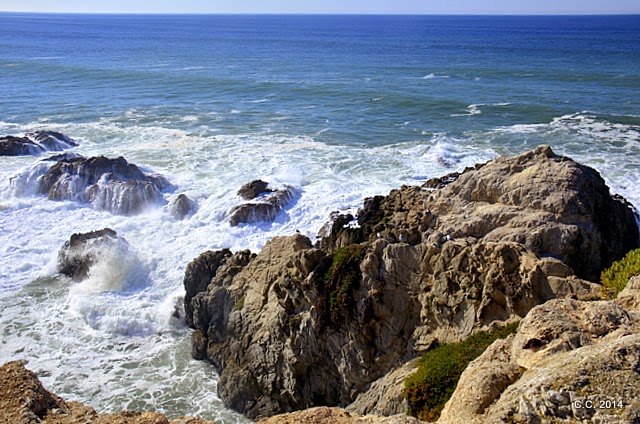 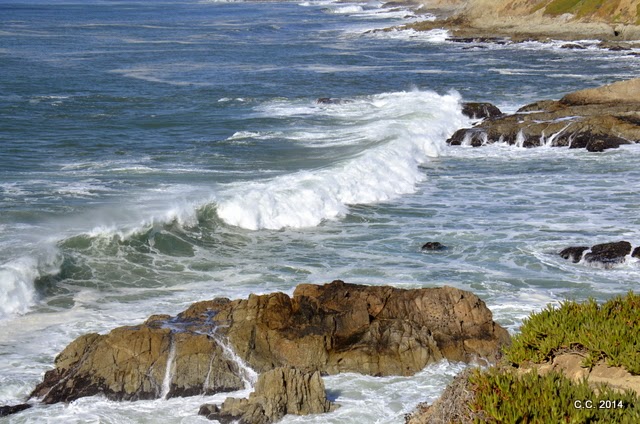