Having fun with a Zinnia

My rugged Zinnias just keep blooming in the garden. Despise the lack of water and the very dry, dog days of summer, they persist.
This morning I took my Nikon D5100 camera outside, with a 105mm macro lens, and took a few shots. Then I had some fun with them in Picasa, a free, online, photo storage program, and transformed them with special effects. 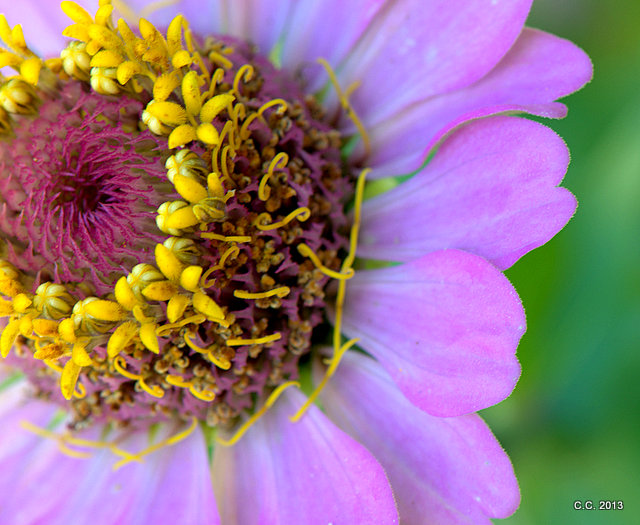 And the taking away of some color. 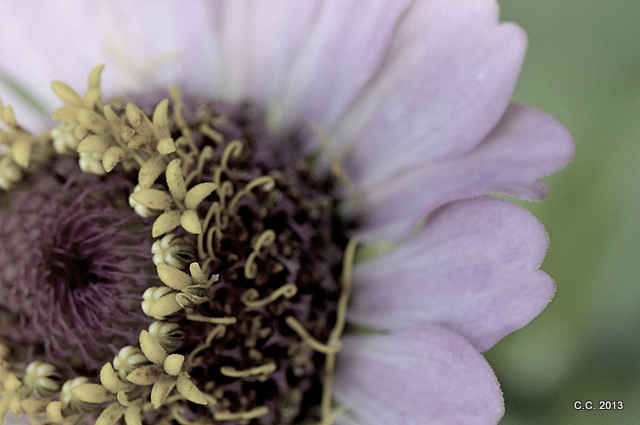 or the switching of color that focuses on the magical inner world of its center. 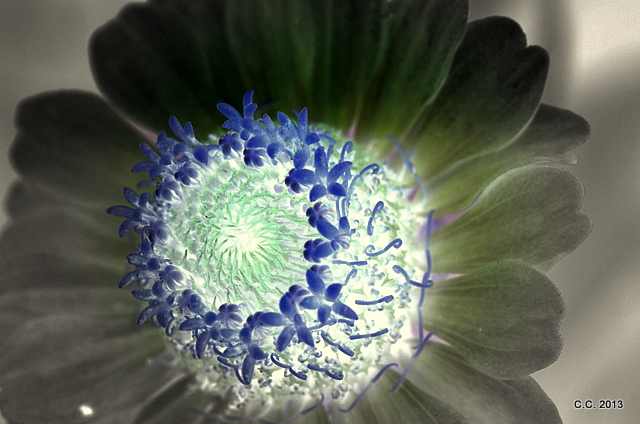 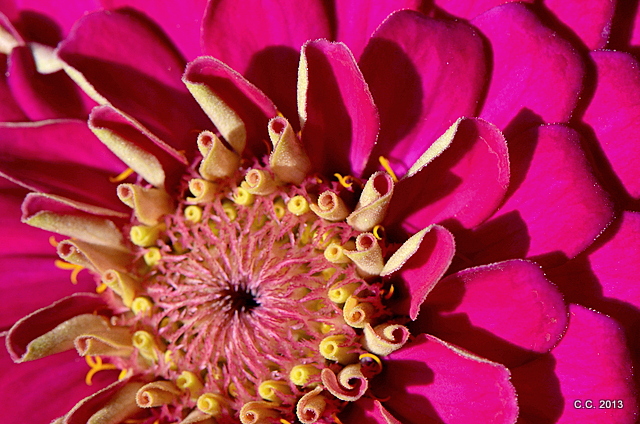 transformed into a drawing. 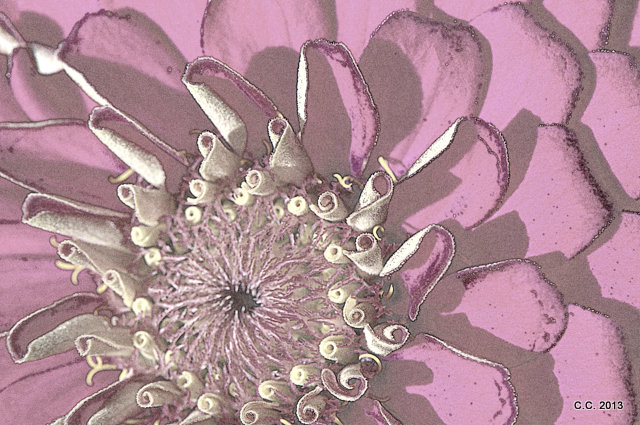 And finally the same zinnia... fresh out of the camera 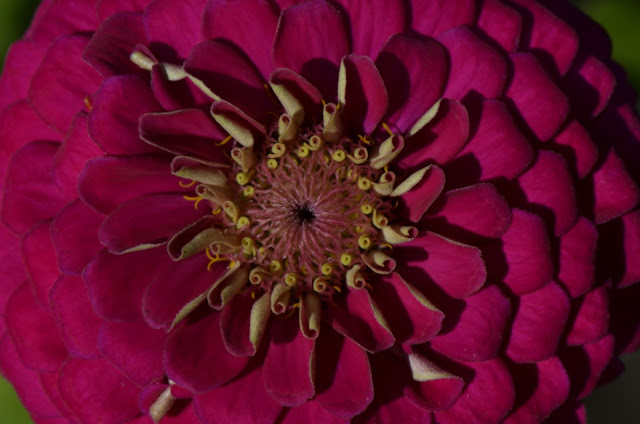 And then... all zoomy in black and white. 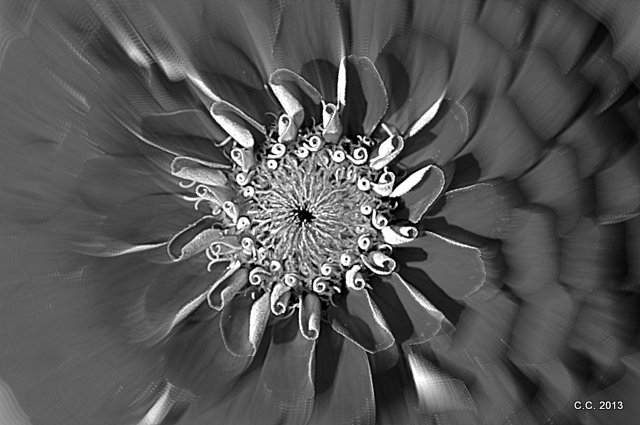 This is how I spend a few hours of my retirement each day. It's a magnificent obsession... and so much fun. 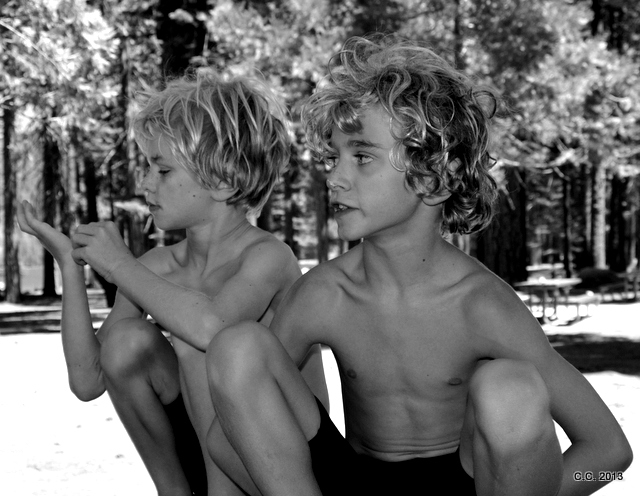 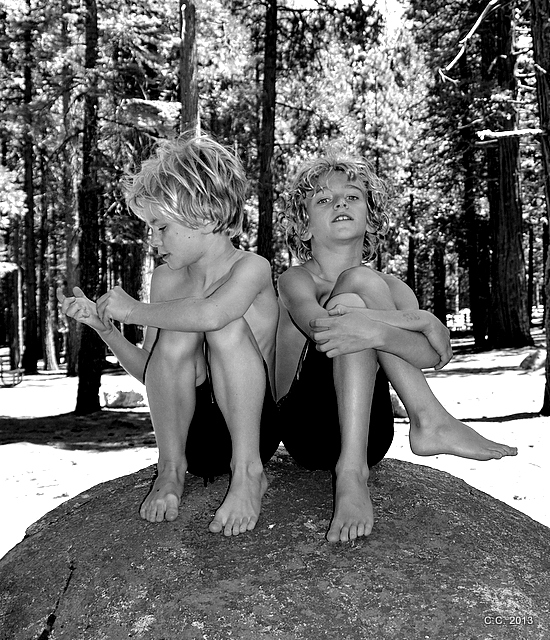 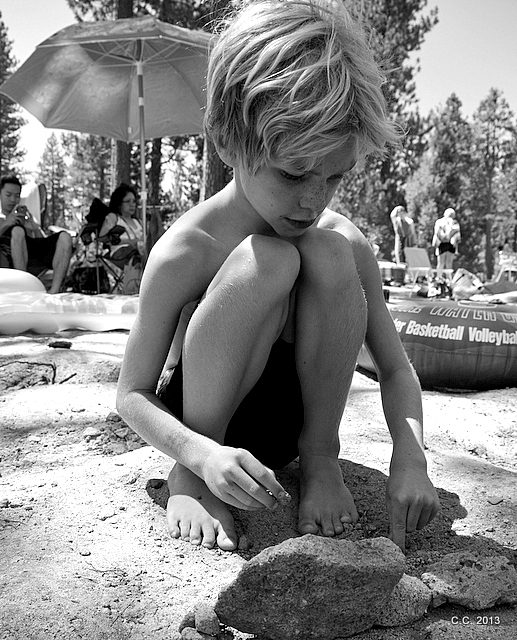 The Beans made up a game... with a little of my help. I call it Jumping Boulders. Well, maybe that's the name I gave it when they took me to the end of the loop we were camping on and I watched, in horror, as they jumped barefoot from one rock to another. So, I made up a few rules and slowed them down a little. It became a challenge to run to the top of a huge boulder in as few foot steps as possible.
Big Bean did it really well. Look at that concentration. 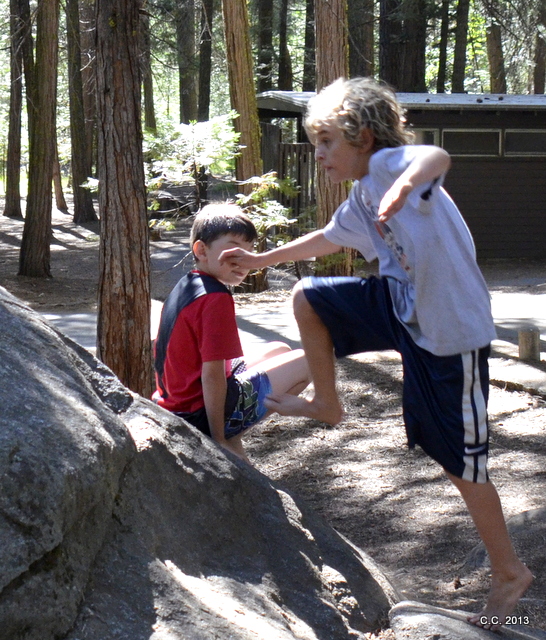 He was the oldest. He was motivated. 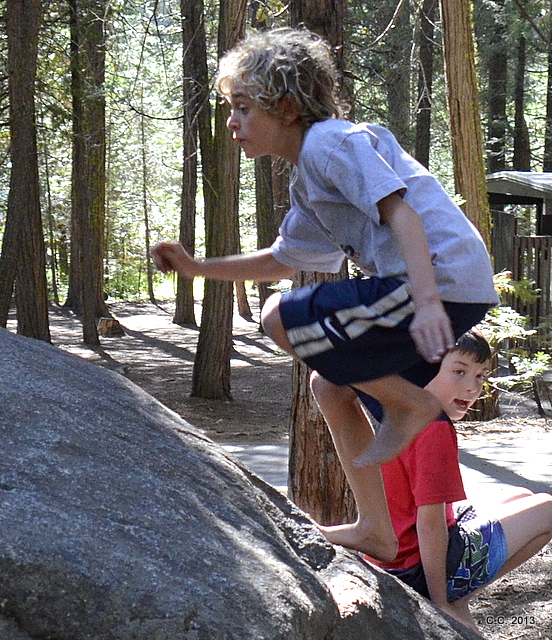 Look at that form. Their new friend watch and yelled encouragement and, later, joined them in an attempt to break the record. The Bean won... hands down, I mean up. 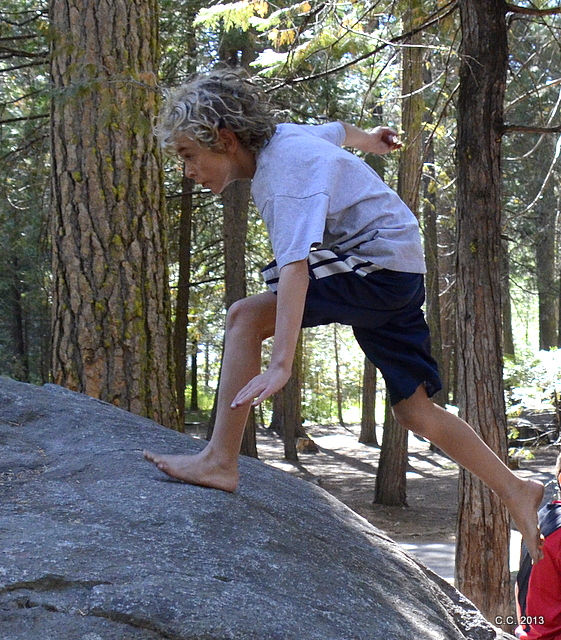 Oops! Almost touched the rock with his hands. (They decided that you couldn't use your hands.) 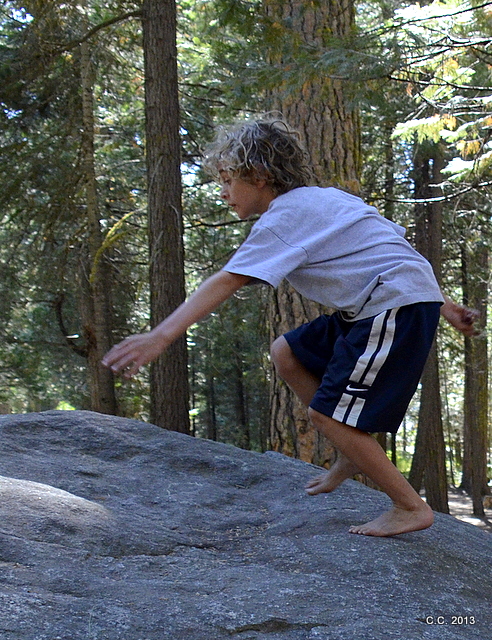 And then with graceful precision...sticking the perfect landing.

Little Bean did this too.
Here's the start... a run at the rock. 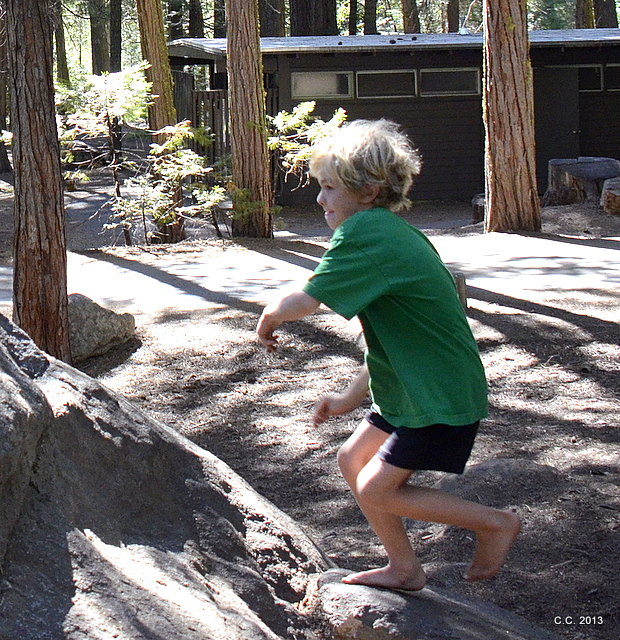 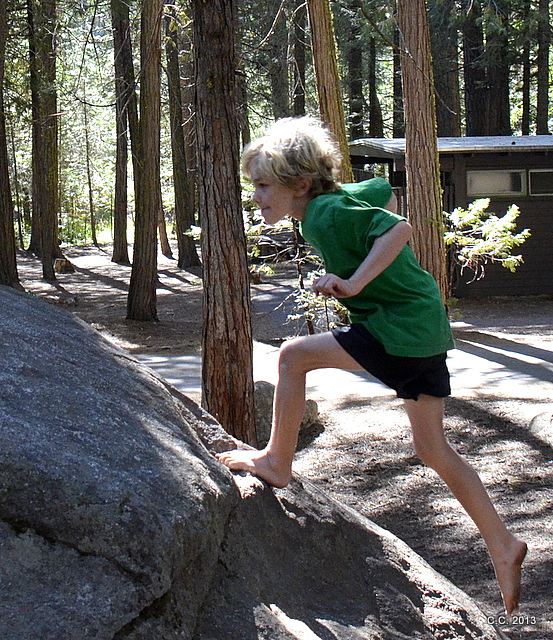 He makes it look so easy. 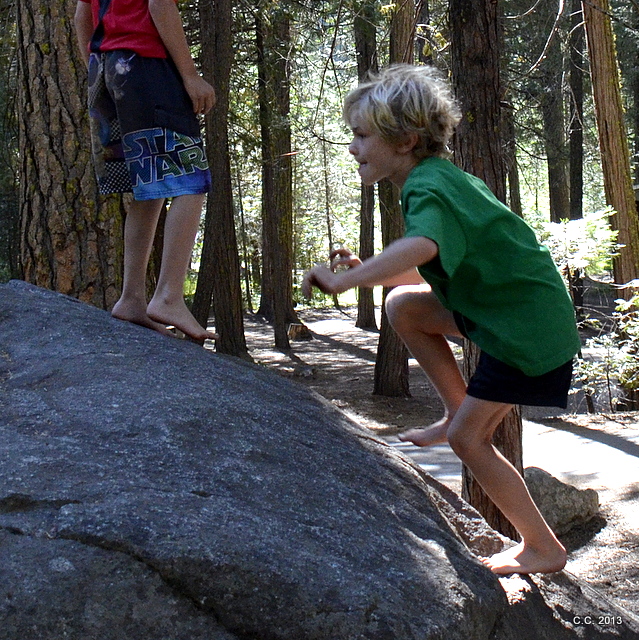 And always... the focus... the concentration. Olympic quality form.
Maybe, someday, this will be a sport at the Olympics and, like the unique jumping style called the "Fosbury flop" that changed the discipline of the high jump forever, the Beans might be the first to qualify for a brand new way of running and jumping. Hey, you never know.
They did this over and over again to see how few steps it took them to reach the top of the boulder. My feet hurt just watching them. 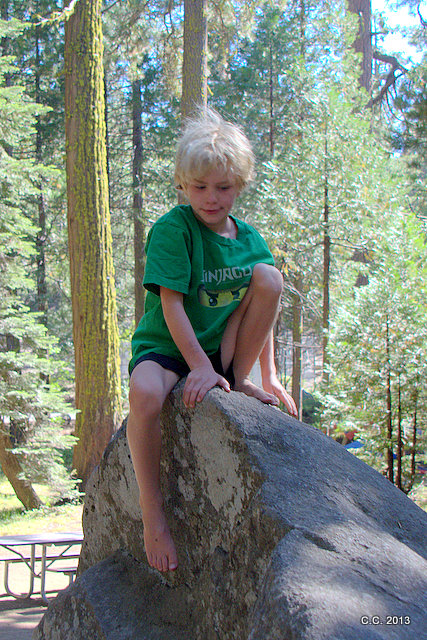 King of the Rock.


(These photos were shot in manual mode without my paying attention. I was so busy taking pictures that I didn't look at my camera settings before I started shooting. I thought I was shooting "auto". The photos are noisy (grainy) and not very sharp. My mistake. But they're good for the story.)
Posted by farmlady at 10:22 PM 6 comments: