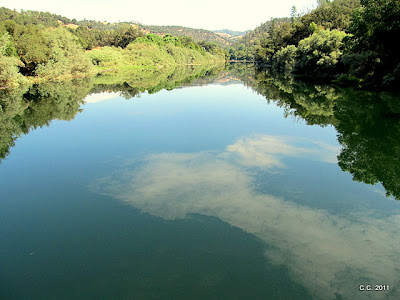 I leave you with a beautiful photo of the Mokelumne River... filled to overflow and reflecting clouds in its waters. This was taken from the Middle Bar Bridge at the border of Amador and Calaveras Counties.

I'm leaving this afternoon. I will be gone until Tues or Wednesday of next week. I'm going to the ART-IS-YOU Art Retreat in Petaluma, CA. My sister and I will be there for a long weekend.... and Riki... and Diana... and lot's of other folks.

I CAN NOT WAIT.
There will be food, artists, fun and a wonderful Antique Fair too.
I'm taking a class on Altered Books and one on Nuno Felting. The classes are taught by well known artists and mine are both all day classes. Should be very exciting.

Just a quick post about a few seemingly unrelated items of questionable interest to anyone but me.

FIRST... I think that this old ad, that showed up in my photo storage without being put there by me, is possibly the first scientific study about what donuts mean in our lives and  a "sign" ( from Aliens?)  that Donuts are really good for you. 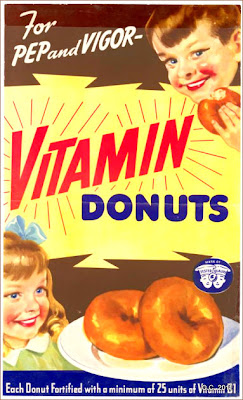 What's a "unit"? It says that each donut is fortified with a minimum of 25 units of Vitamin B1. Because I had some time on my hands this morning... I looked up "unit".
1. The smallest whole number greater than zero; ONE. 2. A definite amount or quantity used as a standard of measurement.
Well, that sure clears things up.
I really don't care (My old Weight Watchers lecturer would slap me) what they have in them. Do you?
Do we even WANT to know?  I like them and that Vitamin B1 really tastes good. SECOND... Momma Turkey and her babies.
They're coming in for water and the scratch (seed mix) that we leave for them.
I know!
Don't feed the wildlife!
But it's tough out there right now.
I'd like to see you forage for food in these foothills...In the summer... In this heat.
Look at those cute adolescent babies. How could you not feed them something? They stand there and look at us when we feed the chickens.
It's the right thing to do.
THIRD... Annibel is doing her thing. 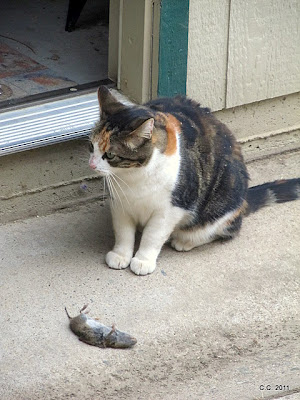 Yes, she brought us a gopher. She was so proud.
But it didn't want to play anymore. 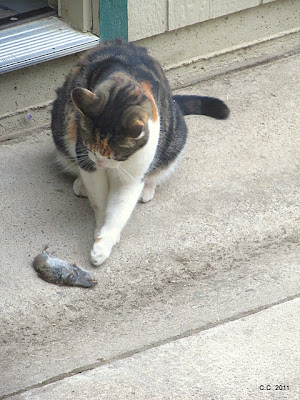 The passion for the game was just not there for the gopher.
So... Annibel laid on the it for awhile. 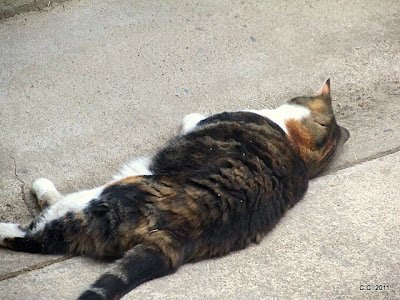 Sometimes the thrill of the hunt just doesn't maintain the level of excitement that a cat needs. She got up, threw the poor creature into the air, as if to say.."Wake up. We were having fun. What's wrong with you?" and then she just stared at the gopher for a while, as if she could stare it back to life. 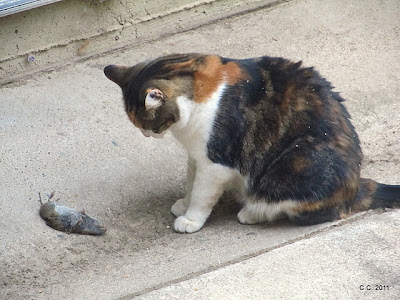 Poor Gopher. They're not an endangered species and they have made our lives here impossible with their incessant burrowing. But this gopher was not going to be digging anymore tunnels here on earth. I felt sorry for the poor little thing.
I said something to her. I think it was, "Oh, Annie."
Somehow she understood the permanence of the situation and she finally walked away, leaving the remains for us to take care of. The fun was over. She was on to more exciting adventures.
Do we humans fight against our own nature? Do we tend to love something when it's enjoyable and walk away when it's boring?
Just a moment of profundity in a rather random post.

FORTH... and finally... And to end on a lighter  note, possibly the key of B1 (as in a unit... a single thing, person, or group that is a constituent of a whole. That's us... a unit of people and animals
I sing a song of summer...
of gardens, heat, fire, animals,
the coming of a new season
... life... death
and some accomplishments.

The building of a potting shed. 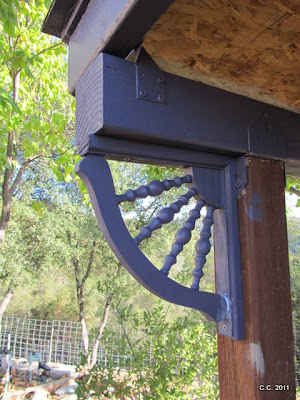 This is just a peek. We are in the painting phase. It will be done soon.
We may have to call it the CAT house. Annie thinks it is hers.
She thinks that she has supervised the whole project. She has been there every step of the way.
We may have to put a small door in the wall for her to come and go as she pleases... or a least a sign with her name on it.
She has approved of everything so far.

Have a decent week...