Wordless Wednesday: " Don't tell me the sky is the limit..." Dorothy Parker 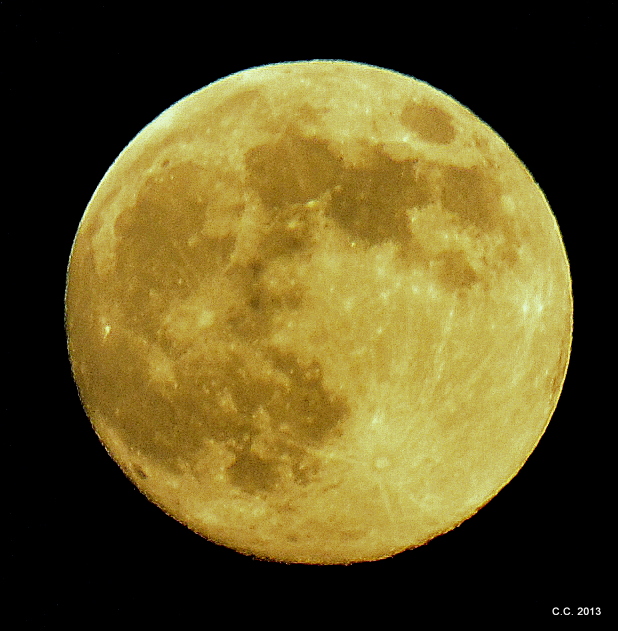 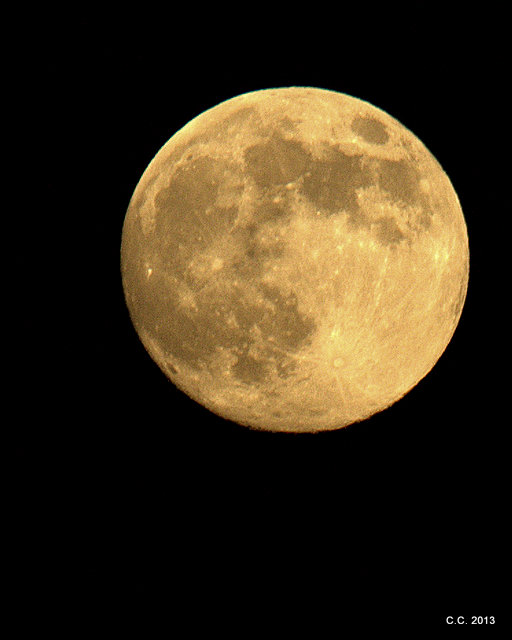 Long weekend... and a little miracle.

I was gone all weekend. Left  for the San Francisco Bay Area on Thursday. Went to San Francisco on Friday, with my sister and brother in law, to see the Richard Diebenkorn exhibit at the remodeled de Young Museum in Golden Gate Park. 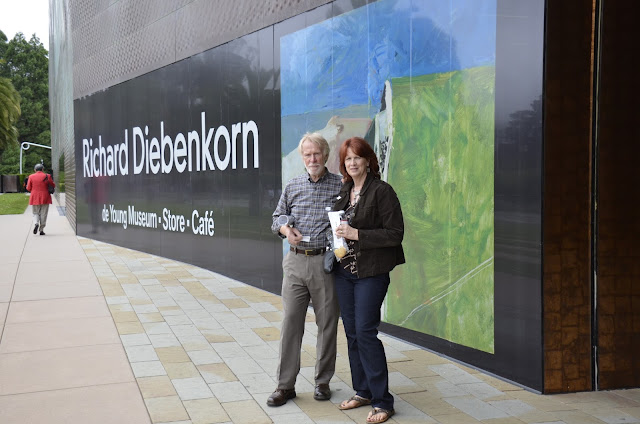 This building has been remodeled  and was finished in 2005. 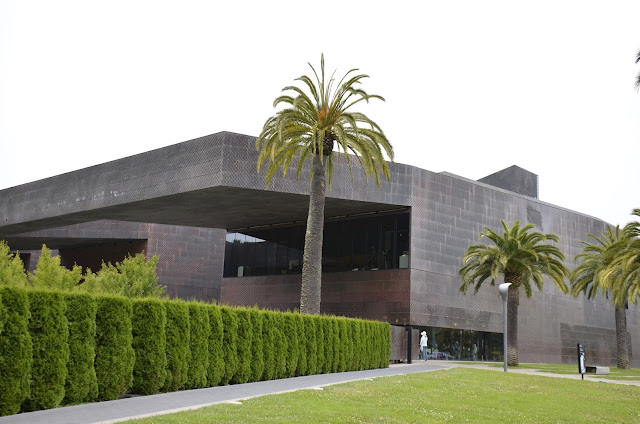 I hadn't been there in years. It's very different now... but beautiful and modern.

On Saturday I spent most of the day at my grandson's big swim meet at my old high school.
On Sunday my sister and I went to some open houses in Berkeley and then I babysat my Beans (the grandsons) that night.
Yesterday I came home and today I sorted and priced stuff for a yard sale at my friends house next weekend.  I'm bushed.
I will tell you more about the Swim meet and the Museum soon.
The weather has cooled off but we have SMOKE from a fire down near Mammoth Lakes. Hope it dissipates by the weekend for the yard sale.
********************
I have a quick story about a cricket.
Before I left last week, I was watering the garden. We had a small plastic pool that we filled with a little water for the dogs to play in. It was an experiment to see if they would get into it on hots days to cool off. Right...
Well we had it out there for the dogs but they weren't getting with the program. While I was watering that evening (It was HOT mind you.) I took my sandals off and stepped into the pool to encourage the dogs to join me. They just looked at me like I was crazy. So I leaned down to splash the water and when I did, I saw a pale cricket in the water. It was dead and had sunk to the bottom. I scooped it up and looked at it. It didn't move. I carried it over to the porch and started to lay in on a potted plant when the phone rang. I ran inside and set the cricket on the table and answered the phone... and since I can't multi-task anymore,  I forgot about the cricket. I noticed it at dinner, just laying there, but left it alone because I was busy. I forgot about it the rest of the night and went to bed.
In the morning the Prospector asked me what a dead cricket was doing on the table. I told him that I needed to take it outside and well... you know, say a few words over it and put it on one of the potted plants... or something. I reached over to pick it up and it moved away from my hand. That "dead" cricket was alive.
Can you believe it?
I had a speed light diffuser sitting on the table with all my camera stuff, so I used it to pick the cricket up and gave him a good look. 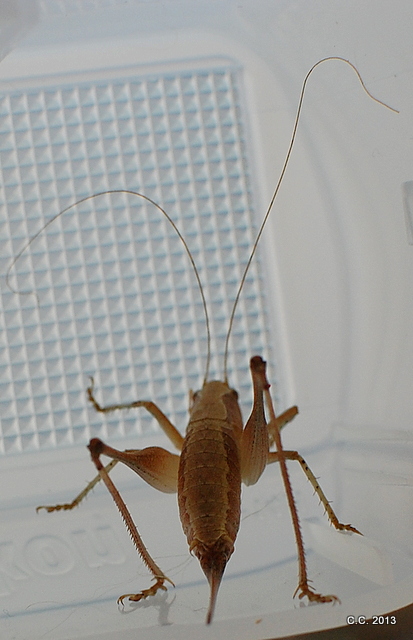 He just sat there and wiggled his antennae at me, so I took him outside and set the plastic cover on the ground in the garden. 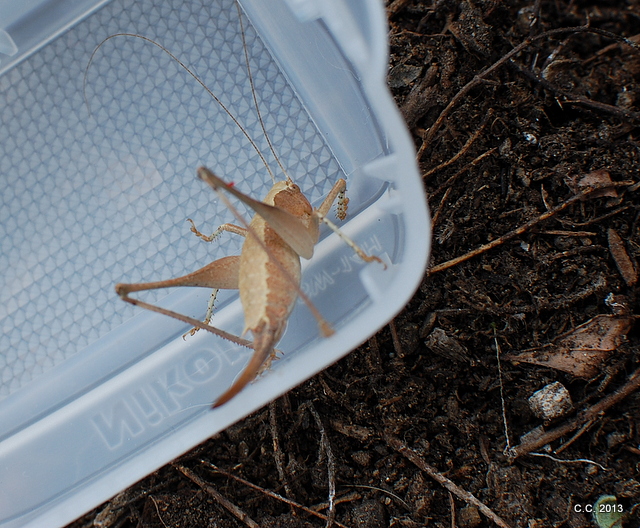 He didn't seem too enthusiastic about leaving the little container. So I lifted him out. 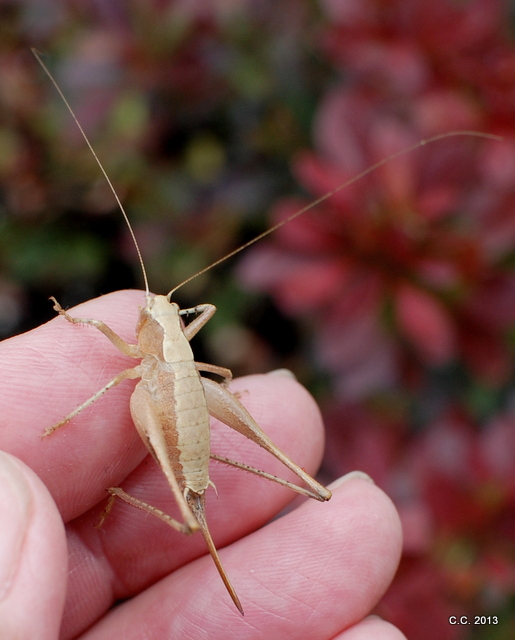 and set him on a bush. 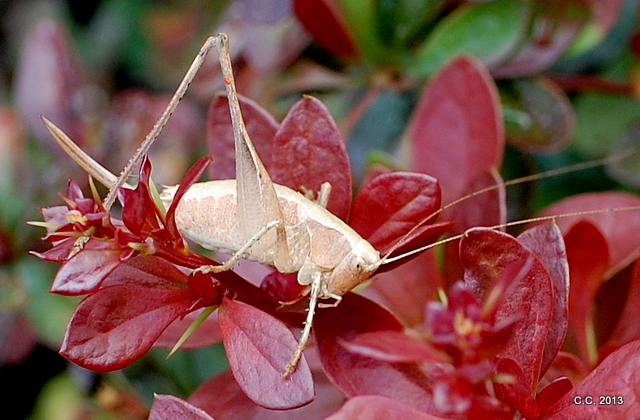 Pretty little thing. All pale and looking quite ALIVE. It was just a miracle. He sure seemed dead the night before. But I guess he was just water logged. I really don't know what happen. I'm sure glad that I didn't throw him away thinking he was dead and gone.
I said goodbye to the amazing cricket and turned back toward to house. There, on the edge of the garden, was a lizard watching everything play out.
He looked like he was saying,
"Dumb cricket. You don't see lizards falling into large bodies of water. Just don't try to pick me up and take ME in your house. I have enough trouble with those dogs of yours out here. They are always chasing me. Have a nice day." 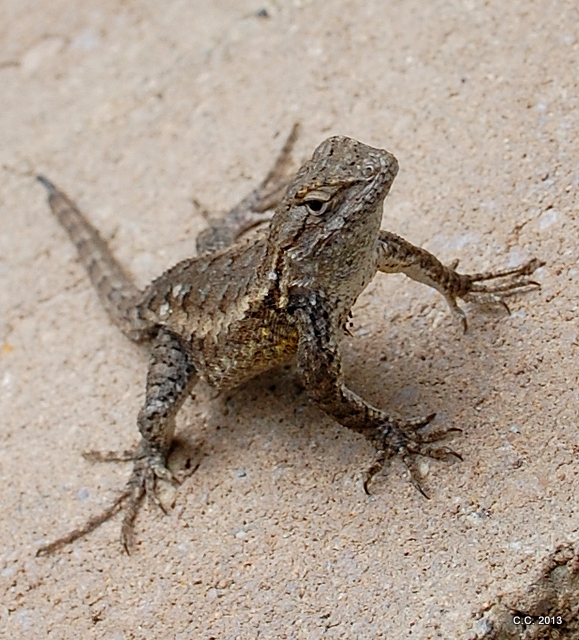 So all was happy and the cricket lived to tell his friends about his near death experience and his amazing second coming. Who knows what happen. I'm open to any suggestions. Sometimes we just don't have answers for things that happen. We just have to accept the little miracles, learn what we can and move on.
We drained the pool. Carl and Cutter didn't seem to care, one way or another.
The dogs did chase a lizard today. I told them not to... because, "There's this one lizard (with attitude) that might take it personally."