I love our chickens. We added four more to our flock this spring and they are finally establishing a new normal in the hen house. The young ones are learning about being chickens and exploring their surroundings.

There's Paloma, who has beautiful feathers and a very long neck. She has trouble navigating things like solar garden lamps... 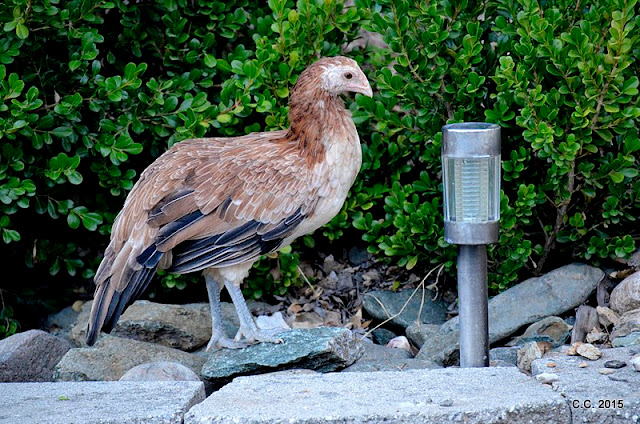 She stood and pecked at this lamp one evening, expecting it to move out of her way. Then, when she finally maneuvered around it, she walked into a big dry weed and it scared her half to death. She's kind of flighty and delicate. Her tail feathers drop down instead of up and she seems to favor low, scud missile flying instead of walking and running. I thought she was going to be a Banty but she's too big. I'm not sure what she is.

Clarissa is our beauty. She's a Silver laced Wyandotte.There were two, but one died right after we got them. It's a shame this happen because she is a really good chicken and I would love to have had two of them. Maybe I will get another one next year.

Clarissa is a big, beautiful girl. Her feathers are so gorgeous that I think we should show her at the Cow Palace. 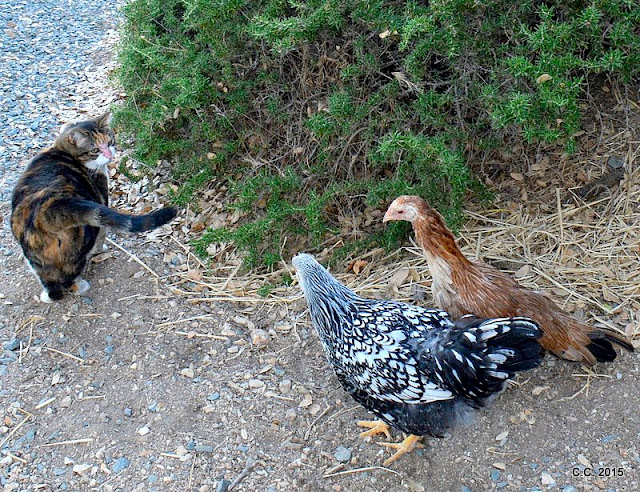 She and Paloma like to tease Annie, our cat. It's one of their favorite pastime. I think they're just curious. Annie likes to monitor the chickens, but she doesn't like them getting in her space.

Then there's "dark brown chicken with spots". (We haven't named her yet.) 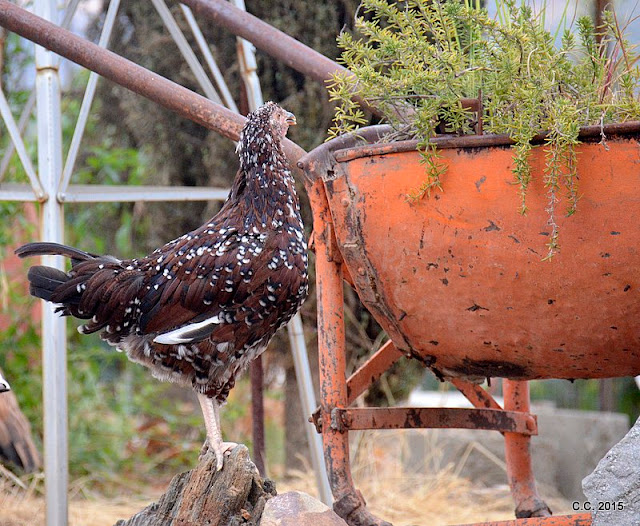 She likes to go off on her own and investigate things. 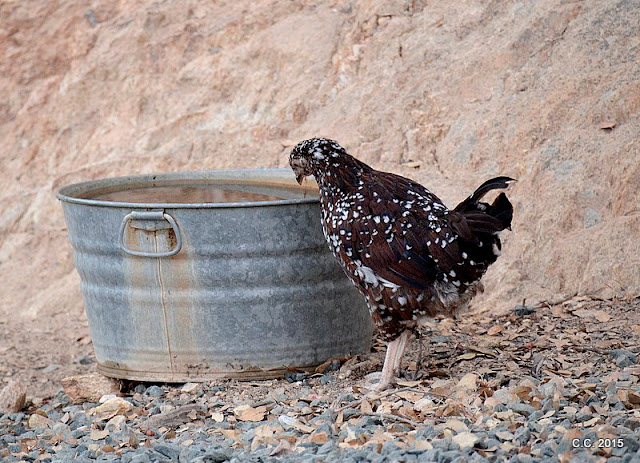 Even the water trough seems to fascinate her.
She was suppose to be a French Moran, but until she lays an egg, we won't know.  Morans lay dark brown, chocolate colored eggs. She doesn't look quite like any of the Moran varieties, but she's closer than any of the others. Maybe the feed store got some chicks in the wrong bins. I thought that Paloma was the Moran and she is obviously not. She might be half duck.
Then, even though the breeders try to cull the roosters from the herd of baby chicks... sometimes they sneak through.
This is Bonaparte. He's our new, little Bantam rooster. We had lots of names for him and I really liked some of them, but he's little and tough so Bonaparte it is. The Prospector calls him Bony. 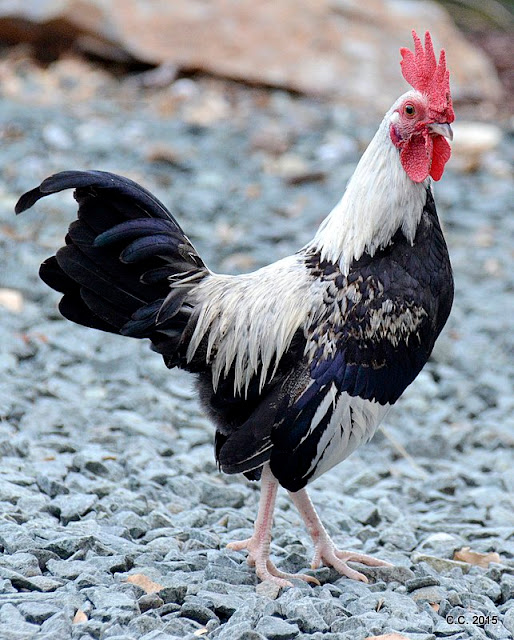 I think he's going to be a good rooster. He seems to like his hens and even seems to have respect from the big, older ones.
Big Red Hen, our Roady, hangs around Bonaparte a lot. 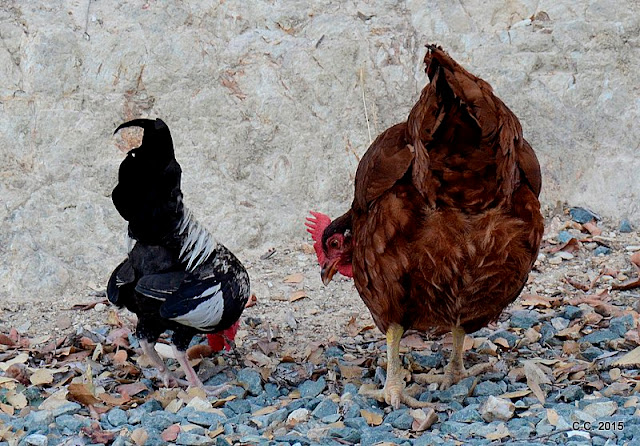 I think she's in love.

The Americana's are choosing to feather dust in the middle of the driveway and ignore the newbies. 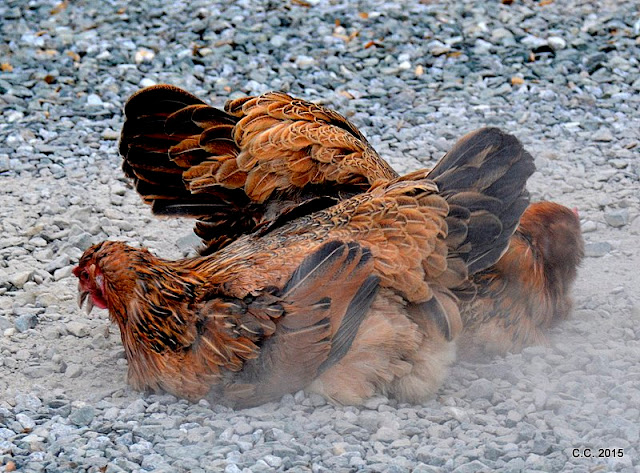 They are just waiting it out... 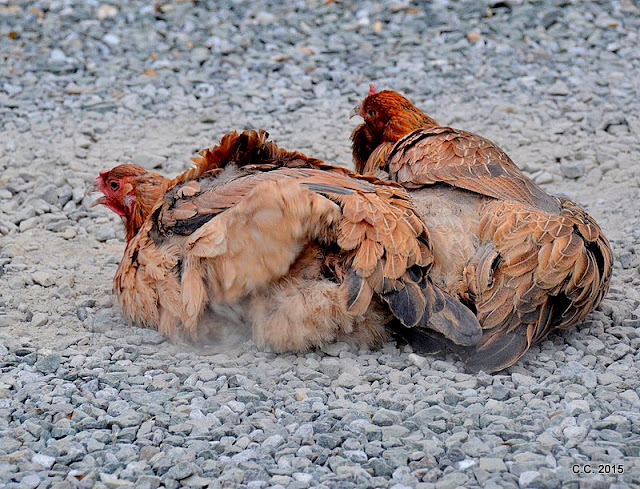 ...until the dust settles.
Squeek', our little banty hen of ten years, is trying to establish order and she pushes the new ones around a lot... but this may be a task that is too much for the old chicken. She is spending a lot of time in the chicken house... 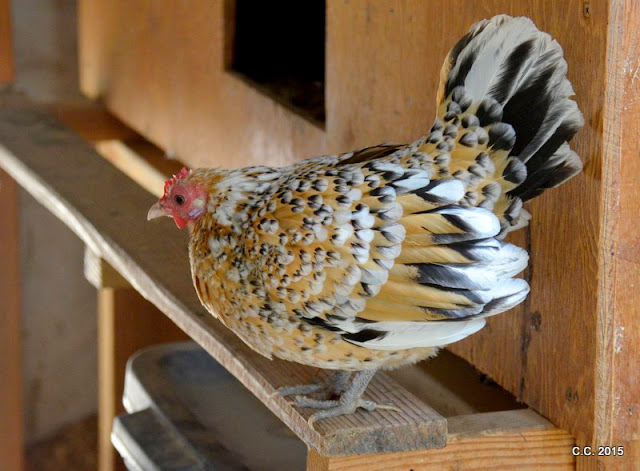 ...and at her age, we will let her doing anything she wants.