The Buzz Word is Busy.

This has been two very full days. Yesterday I cleaned the house because we hosted the goat meeting here today. Now this may sound like a simple statement: "I cleaned the house.", but as I get older it has become a big deal. Cleaning this  little house has become an act of effort and love.  Kind of like getting ready for a holiday dinner only a bit easier because I didn't have to make the whole meal.  This morning  I made a chicken, broccoli, lemon casserole and  bought some good french bread. We set out some wine and lots of cold drinks. The rest came  from all my goat club friends. Lots of great salads. One with (what else) goat cheese and Brownies for dessert.
It was really a good meeting and some of them stayed for quite a while afterward just to talk. The weather was wonderful. The Corgi boys were perfect little gentleman.  Everyone followed the directions we sent out and found our house without any problems. No one got out of their cars shaking and scared to death. It has happen before. We live where most people have not gone before but these are goat people after all. They're resilient and resourceful. I wrote on the directions to "Think like a goat" when coming up to our house. They did. I'm so proud of them all.
We don't get much company. I'm kind of people deprived out here. The Prospector is even less of a social butterfly than I am, so we really fussed about all kinds of things before the meeting.... like parking,  having enough chairs, where to put the dog faced boys and how to cover the small area of the wall to wall carpet that the pups decided to eat for lunch a while back. After all of our anxious concern, no one noticed the chewed rug or anything we had worried about. They loved our home and were happy to be here. Sometimes we worry so much about appearances that we forget about the enjoyment of having people visit. It was a really good day.
I haven't tried to access my photos for a blog post for two days. As you know, I had a moment on Thursday when I got upset with Picasa, my photo storage program. I'm going to post one photo of my name tag that I made at our gourd meeting on Thursday and see if it will find my blog post. If it does, tomorrow I will continue the story of my Uncle's birthday.
Here goes.... 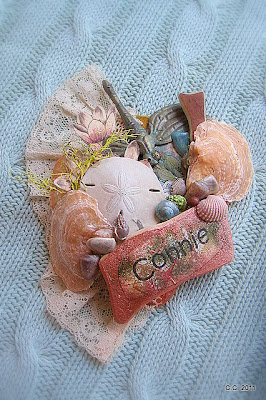 YES! It's working. TA DA! The gods of the WWWeb are shinning down on me this evening. (Now you know Farmlady's really name.)  But, alas, I'm finding myself a bit fatigued from all the festivities of the day.... so the rest of the Susanville story will have to wait until tomorrow.
Posted by farmlady at 6:00 PM 10 comments:

Life interrupts the telling of the tale.

I guess that I will have to try again tomorrow. Picasa 3 is just staring back at me when I click the photo link. I can't get it to bring any of my photo files up to my post sooooo.... Phooey!  It's almost 7:00 p.m. and "I give"
I went to my gourd club today and we had a guest artist who show us all kinds of interesting gourd techniques. We made named tags out of broken pieces of gourd. It was really fun. If I can get Picasa to quit holding MY photos hostage, I will show you the results of my gourd pin class tomorrow.
AND...... if the photos are available to me, tomorrow, I will continue the story of our trip to Susanville.
Does this Blogging, Computer, Internet, thing make you as crazy as it makes me? Do you think anyone out there really cares if we post or not? Is this because I didn't  join Twitter? Are the Gods of the World Wide Web sitting somewhere making decisions on the basis of how many friends I have on Facebook.
DO YOU THINK IT MIGHT BE THAT I MADE CUPCAKES FOR THE MEETING AND DIDN'T SEND SOME TO BLOGGER?
Holy crumbs! I feel like a contestant on a Quid Pro Quo Queen for a Day.... that lost. It's time to shut this thing off.
See you tomorrow....
Posted by farmlady at 7:27 PM 10 comments:

Labels: Where are my pictures?, Why does this have to be so hard sometimes

"An Old Man Loved is Winter with Flowers" Part 1.

This was a trip to Susanville, Calif.  for my Uncle's 90th birthday party and it was worth every moment. We were heading to our Uncle's territory, in the high desert of the northern Sierra Nevada Mountains, to a well deserved party in his honor.
My sister and my cousin Suzi met us on the highway. The Prospector drove me down to Lodi and we loaded my things into my sister's car. I drove north on Highway 5 to Chico and Sis drove into the mountains to Chester. The forecast was for light snow. We brought chains but never needed them. 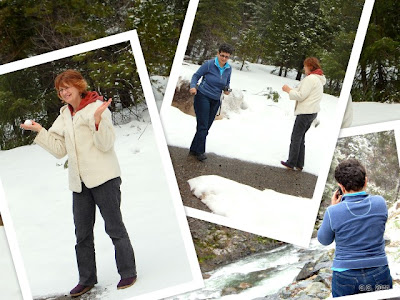 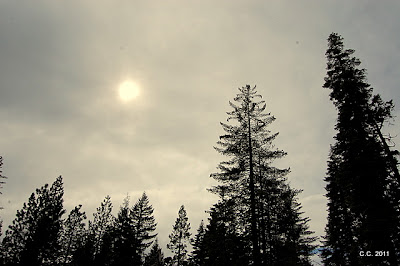 We worried about the snow, which never got too heavy and made the trip from Chico to Chester a Winter Wonderland of a drive... 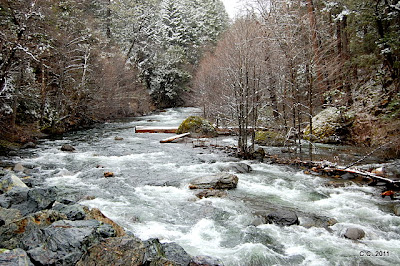 This is Deer Creek on highway 32. It was stunningly beautiful. It was also very cold. 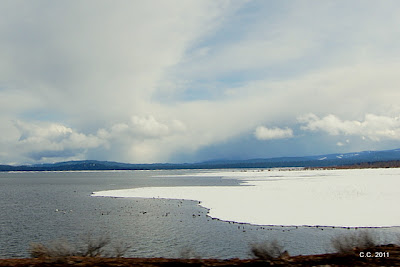 We finally reached Chester and Lake Almanor which was covered with ice and snow around its edges. What a beautiful photo shoot this was.
About an hour later we drove over Fredonyer Pass and into Susanville, CA. (elevation 4200 ft.) on the east side of  Lassen National Forest.  about 85 miles north west of Reno, Nevada.
We had reached our destination.
*************
The Roseberry House Bed & Breakfast was waiting for our arrival. 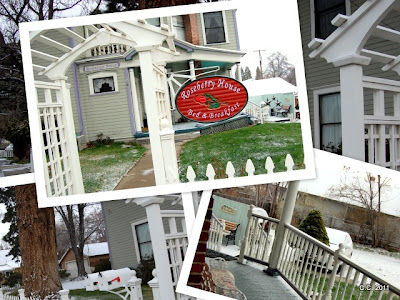 The innkeepers, Richard & Charmy Sorem, greeted us with such warm hospitality that we felt like we were members of their own family.
Then we went upstairs to our room..... 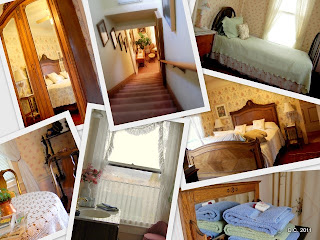 Sis and I had the queen bed and Suzi had a charming single in the "alcove".
No one else was staying in the house so we had the whole upstairs to ourselves. My sister and I spent one miserable night sleeping together in the beautiful antique bed and the next night Sis chose to take another room across the hall. It was a joint decision. The rest of our stay was much more comfortable.
I had no idea that my sister talks in her sleep and hogs all the blankets. Tellin' on you sis!! I love ya but we can't sleep together, can we?
*******************
The next morning we woke up to snow falling softly all over town and  came downstairs to one of the most amazing breakfasts ever, cooked by Richard, and served in the wonderful old dining room. 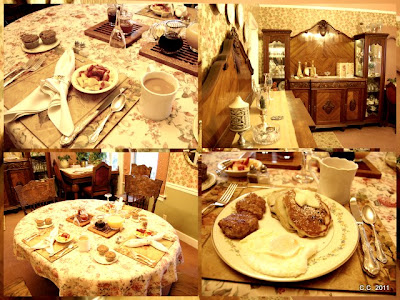 This was a luxury I'm unaccustomed to. It was a most elegant and filling breakfast.  My cousin, Suzi, having just returned from Ireland, was very impressed with the variety of food. She had seen a lot of meals prepared and served in the last few weeks and this one rivaled them all.
After breakfast Sis and Suzi went for a long walk. I stayed in and read my book. Took a nap. The oldster was tired. I wasn't about to go for a walk in the snow.
I got a call from my cousins, in Ashland, Oregon, wondering about the weather and asking which pass we took through the mountains.... checking to see if we had arrived. They were raised in this town. They had no fear and seemed to take all the late snow rather matter of fact.
Sis and Suzi came back from their walk in the snow with stories of what Susanville calls ".... just down the road." and decided to take the car next time if they needed something on the other end of town. It was their turn to take a nap.
Tomorrow I will continue... with a little history of  Susanville, a walk downtown and getting ready for the Birthday party.
Posted by farmlady at 12:33 PM 9 comments: