Last night was a full moon night. I've been keeping an eye on Murphy to see if he was going to dance. Well, it seem that he's grow out of his childhood this month because there have been no signs of dancing or any other strange behavior. Maybe he is dancing late at night when no one is out there. Whatever he's playing it cool and acting like a grown up goat. This is about the silliest thing I've seen him do . He is rubbing his mouth on a piece of wood. I never get a photo of the inside of their ears, which are beautiful, so I'm glad he did this. Look at those ears!

I'll keep watching to see if he is up to his old tricks tonight. They slept in their new house last night so maybe he was confused. I will have some photos of the goat house tomarrow. There's no roof yet and I'm in the middle of painting it; but its basically done. I do have an issue with the Prospector about some missing architecture. Stay tuned.

Posted by farmlady at 6:31 PM No comments:

Stratus Angelicus: no more smoke in the air! 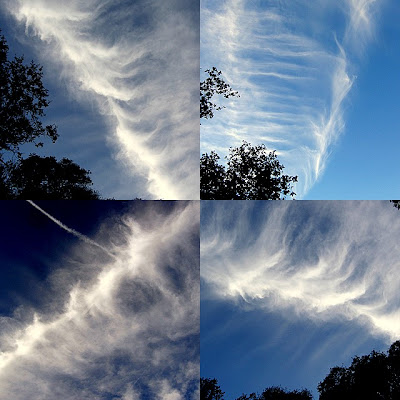 I don't know much about clouds so I can't tell you, scientifically, what these are. I was taking an evening walk and these clouds where overhead. There must be a beautiful name for them because they are so lovely.
The prospector would call them "Cumulus Acillus". (That's pronounced with a hard C like aKillus). He'll say "Look, those are Cumulus Acillus clouds." But then I realized that he called all cloud formations "Cumulus Acillus". He acts like he know what he's talking about, until I say "Acillus?" , and then he gets a big grin on his face.
I think they should be called "Clouds being scattered by high unseen wind or "Stratus Angelicus. Yep, I like that. If the prospector can make up names..., so can I.

I have recieved an award. Jo over at Moodscape (jonjdsbitsandpieces.blogspot.com) has given me a "just plain fun to read" award. She loves the writing, photos, family and animals in my life. She always consistently comments on my posts and leaves me funny emails that gives me incentive to keep writing and posting my blog...., and she calls me "Elly Mae".
Dang, Jo, This made my day and it was just a real dog-gone nice thing ta do.
Thank ya kindly, my friend.
*..... and,

I have an update on my friend, Karen. I got an email from her saying that the preliminary report from the kidney specialist was good news. She has minimal change kidney disease that will be very receptive to the prednisone that she is already taking and that this should show some good results. Her heart is ok ( I could have told her that) and she is feeling better. A new water pill is getting rid of some of the fluids that have made her so uncomfortable, which is an understatement because she was so swollen that she felt like a "water balloon ". She very tired because she still has fluid in her lungs. She is not completely out of the woods yet but , as the little boy on the Kaiser ad says...., " Things are looking up." Right Karen?
Bless your heart girl, no one should have to go through what you've been through this last few weeks. The prayers are still coming. 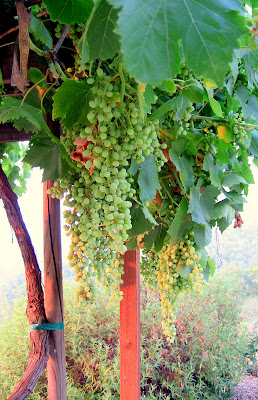 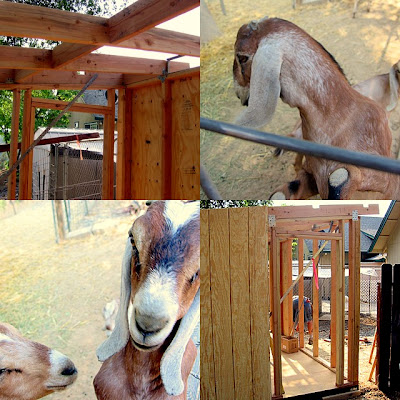 "Well Brownie, what do you think of this? The prospector and I are building you a nice shelter to sleep in at night. Something to protect you and the boys from all the nasty predators out there. Did you hear the coyotes last night? Even through Maggie always hears them and barks , we don't want them to sneak up on you while you're sleeping, now do we?" .....,Brownie looks at me as if he understands and then says"Maaaa...." That's no (or sometimes yes) in goat talk. 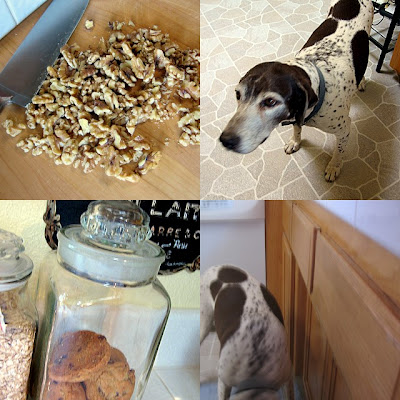 Then I went in and made some chocolate chip cookies with my helper dog, Moke. He cleans up after me and gives me moral support. He didn't stick around very long. I found him in the bedroom sleeping. He's getting so old. He has trouble going up the front steps now and seems confused sometimes.(sounds like me), but he's still my main man in the kitchen. 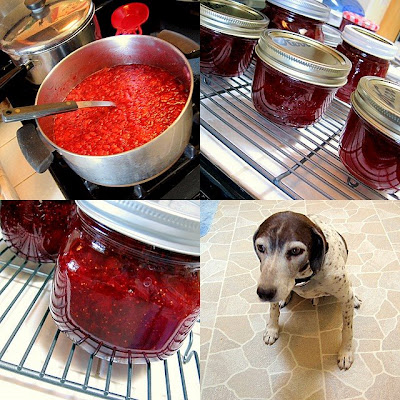 This morning after my cup of coffee, I went out and watered everything. It's going to be a beautiful day. Almost all the smoke is gone and it's at least 10 degrees cooler than last week. I bought some Lodi strawberries Saturday, so I made jam...., with helper dog, of course.

This time I used Sure Jell fruit pectin. I didn't cook it to death and the strawberries maintained their beautiful color. I followed the directions inside the box of pectin and guess what? It came out perfect. Third time's a charm. Remember? The first batch was too runny but had a great taste. It had pectin in it but I think I cooked it too long. The second batch, without pectin, took over an hour to cook and turned really dark. With the final batch I added some lemon rind and 2 tablespoons of lemon juice. I think that is what helps keep that lovely color. So I'm pleased with this batch...., but this is my final jam session. On to the tomatoes, apples and my endless supply of basil. Moke would agree with me but he's in the bedroom taking another nap. 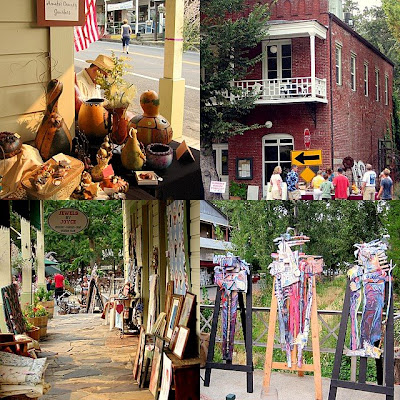 Friday evening our gourd club had a table on the sidewalk at the Amador Wine & Art Summer Social. The event was from 5 to 8 p.m. It was a lovely evening. The heat and smoke were not the issue we thought they would be. The temperature was 10 degrees cooler than Wed and Thurs. The smoke was not too bad and everyone was having a great time. There was live music that made you want to dance, which many people did. All the local wineries were there, and for $15.00 you got a commemorative Amador City glass and this entitled you to taste wine from one end of town to the other. All the shops were open and the whole evening was very mello (probably because of all the wine tasting). 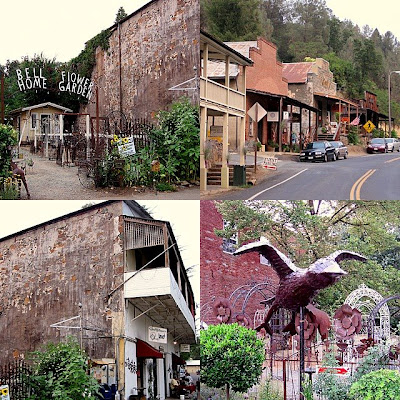 I just love Amador City. I've said this before. It's the quintessential "gold rush" town. Lots of old buildings, old mining remains, and some really nice folks. You can just feel the history here. I love the stores here; especially the Bell Flower Home & Garden. I want that big bird in my yard. Not only does the owner have a wonderful assortment of garden art, but he also has VERY reasonable prices. We bought our iron fence here and it was a "deal". 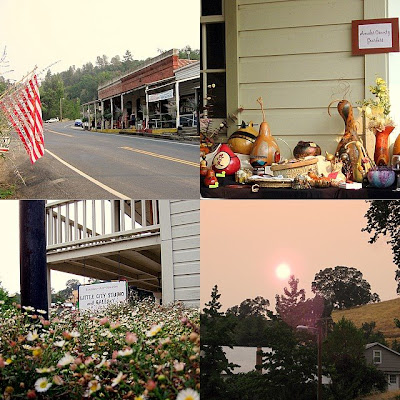 We sold some gourds, talked a lot, and watched the smokey (but beautiful) sun set over the western foothills. It was a lovely evening and a good time was had by all. 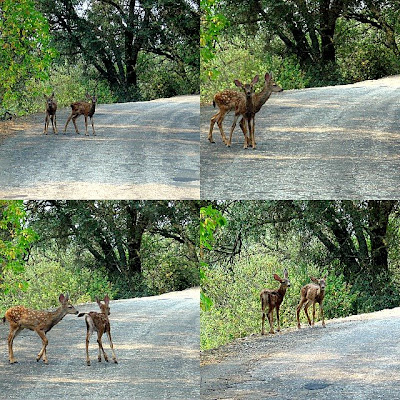 We have the cutest neighbors. These two young-uns were playing in the road and didn't seem too afraid of me. I took a picture then moved the car closer. Took another , and inched closer, until I crossed that invisible line that sets off their " Human..., getting too close" alarm. They turned away , trotted off, turned and looked once more, then went down into the ravine. 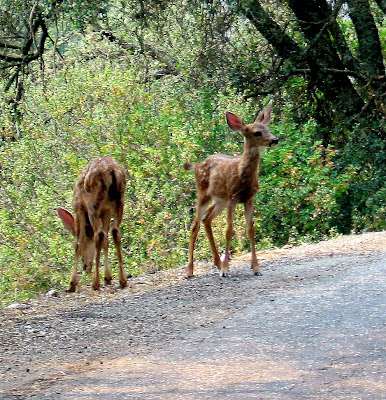 They are such beautiful animals. This is a mule (or black tailed) deer. They are abundant here. I've seen them with their Mom before. I hope she is still with them. They don't look old enough to be on their own. 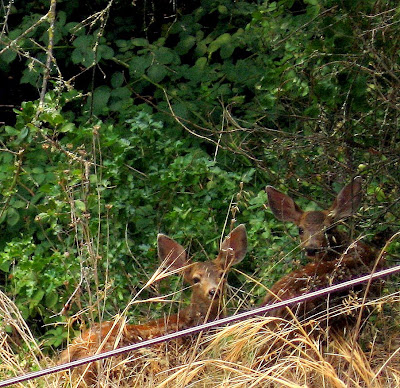 I pulled over and got this shot looking down the hill. There they were, looking at me and the only thing moving were those huge rotating ears.
"I see you" I whispered...., and then there were gone.