I thought this was going to be easy...

Very long three days... this will be a quick post.
Wednesday... the Prospector drove me to the hospital, Kaiser South Sacramento, and I spent the day having the podiatry doctor remove Morton's neuroma's from the back of my toes on my left foot.
It went well. I'm home now. Yesterday was not so good. Today is better. The swelling from the IV is gone. 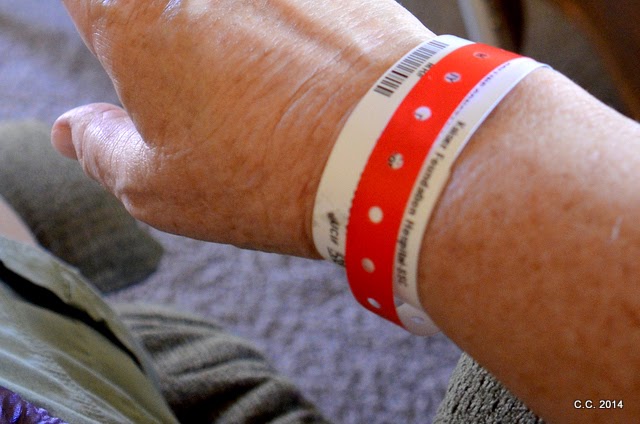 My ID tags have been removed. 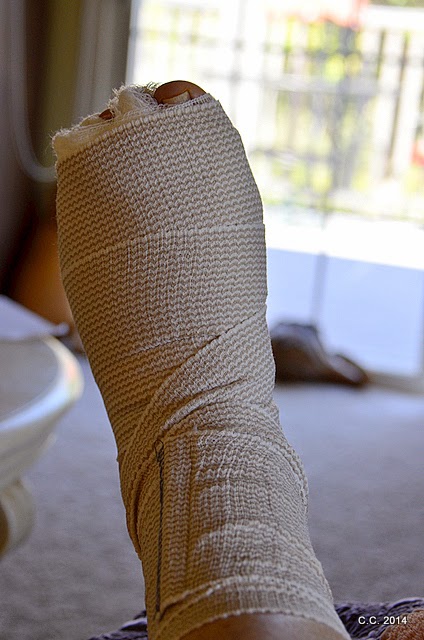 The bandages are slipping. They went from professional wrap (above) to looking like my foot grew another couple of inches.
The "boot" is on and off so much that I just loosened it permanently, so I can slide it off. 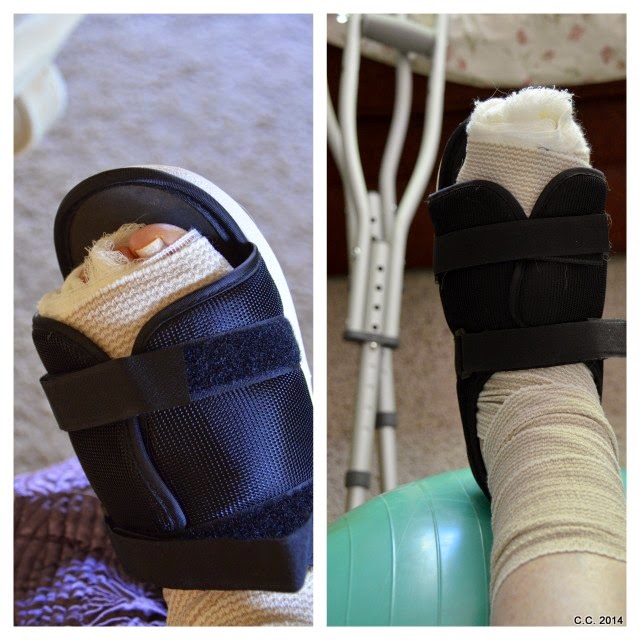 Crutches are tricky.
Miss Antsy Pants is not looking forward to six weeks recovery.
Got to go.
Have to get my left foot above my heart.
Sounds like the game called Twister doesn't it?
I've got good meds.
Sleeping a lot.
Posted by farmlady at 2:47 PM 7 comments:

If trees have souls...

To our south, across the Mokelumne River is the county called Calaveras. This word means "skulls" and was named for the great quantities of human skulls found along the lower reaches of the river. These human remains were some of the native Miwuk people killed by Spanish soldiers.
This county is known for deep caverns, placer mining and Mark Twain's jumping frogs. It is also known for some very big trees. They are the giant Sequoias of the Calaveras Big Trees State Park. That's where the Prospector and I spend the day yesterday.

These giant Sequoias, Sequoiadendron giganteum, occur naturally only in groves (about 68 altogether) on the western slopes of the Sierra Nevada  Mountains of California.  They are named after Sequoyah (1767–1843), the inventor of the Cherokee syllabary . He wrote a syllable based language in the late 1810s and early 1820s.

Giant sequoias are the world's largest single trees and here they are... right in our own backyard. 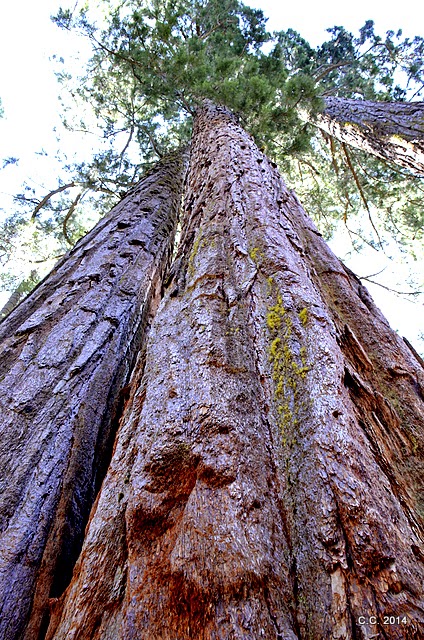 I'm almost embarrassed to say that, in all the years that I have lived in Amador County and the years growing up in the Bay Area, I had never gone to this state park before. Yesterday we remedied that situation. 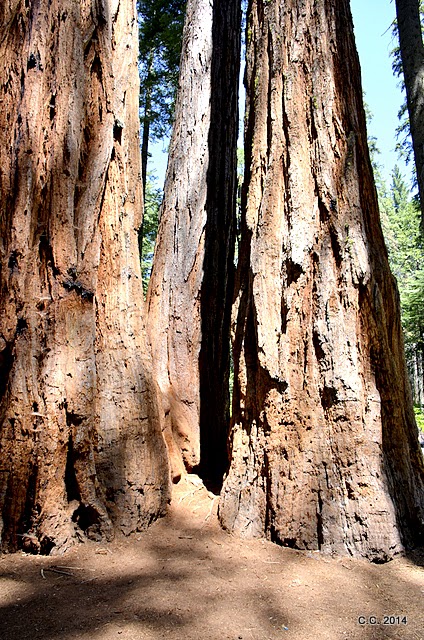 These are truly massive trees. 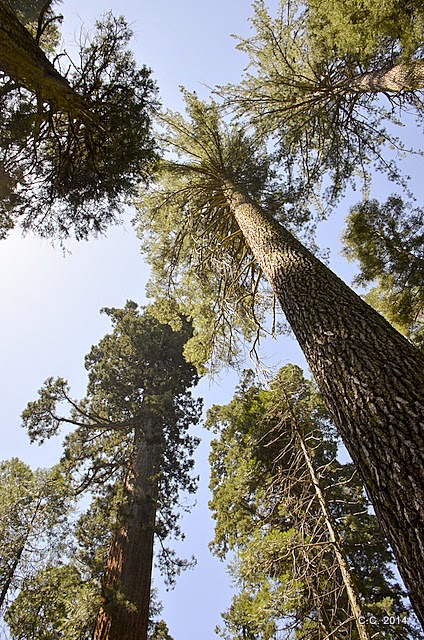 Some reaching 300 ft in height and over 50 ft in diameter.

Sequoia bark is fibrous and can be 3 ft thick at the base of the trunk. 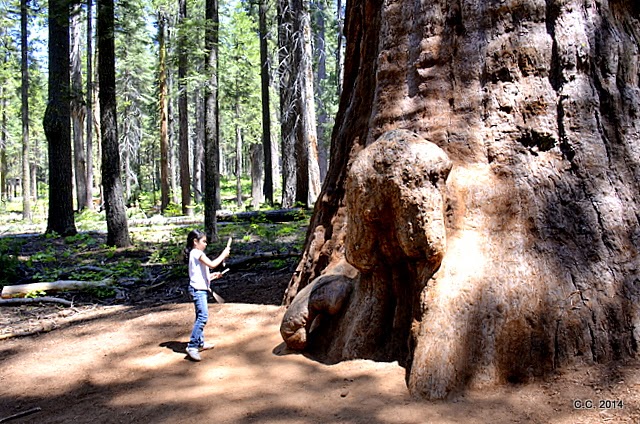 It provides significant fire protection for the trees.

This is a seed cone. 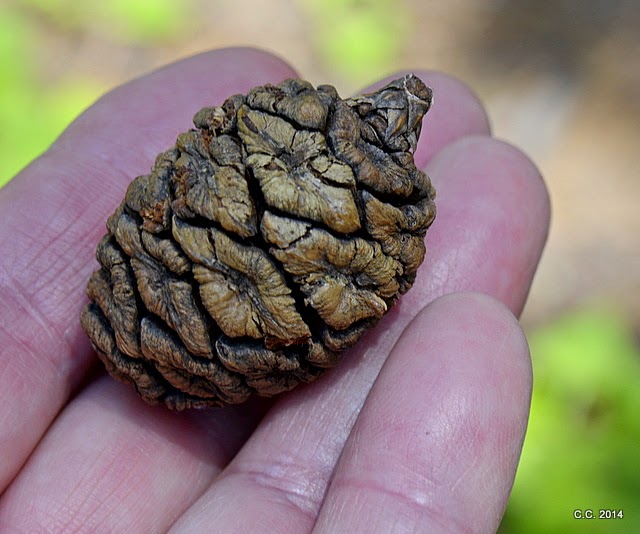 Each cone has 30–50 spirally arranged scales, with several seeds on each scale, giving an average of 230 seeds per cone. The giant sequoia regenerates by seed. Young trees start to bear cones at the age of 12 years but then most of the seeds remain green and closed for up to 20 years before the cone lets go of them in very hot weather, forest fire heat or damage by insects. This is probably why the trees are dying out. We have prevented fires for so long that the seeds aren't able to grow successfully.  Fires also bring hot air high into the canopy, which in turn dries and opens the cones. The subsequent release of large quantities of seeds coincides with the optimal post fire seedbed conditions. Loose ground ash may also act as a cover to protect the fallen seeds from ultraviolet radiation damage. These seeds also need wildfire to clear competing vegetation and soil humus before successful regeneration can occur. Without fire, shade-loving species will crowd out young sequoia seedlings, and sequoia seeds will not germinate.
Right now, the park is clearing thousands of smaller trees, mostly dogwood, from the grove to give the young sequoia seedlings room to grow.
The dogwood is beautiful but has taken over the groves and is becoming a threat to the large trees. 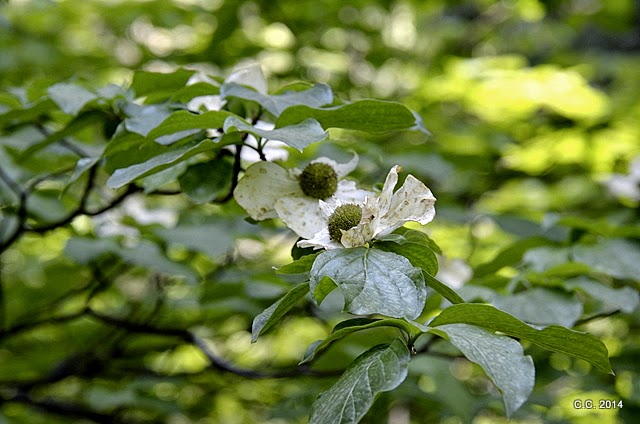 Because of  the Dogwood's root system they have to use a special tree removal system to be sure they get the whole bush. As you can see, the Dogwood is a beautiful bush/tree and has an exquisite flower on it. 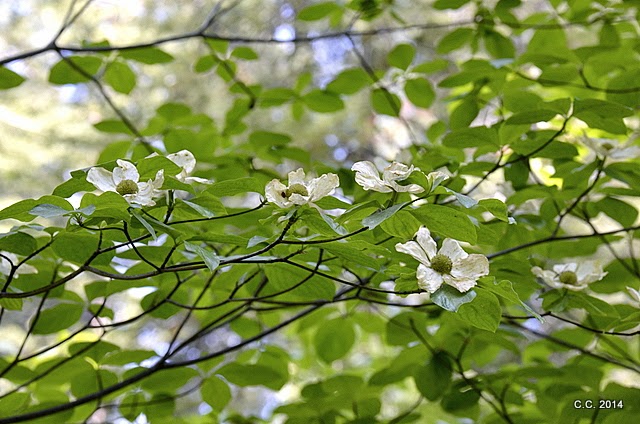 Most of the flowers were gone now and the few that were left were drying up. It's a shame that something so beautiful is so detrimental to the Sequoia. In nature, everything is connected. Each thing is part of the whole.
When man chooses to change the system by not allowing fires, he creates a different system that then has to be remedied. Now we, in our "wisdom", are trying to save these huge trees by removing other trees. Sometimes I think we should leave Nature alone. I really believe that after we are gone, Nature will heal itself and find the balance that we have destroyed. We want to save everything and in the process we have created more damage. Just my opinion.
So we walked about a mile and a half around the North Grove... following Jim, our very informed volunteer docent. 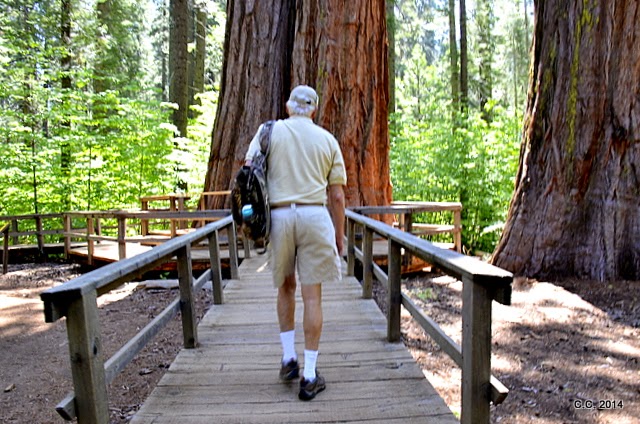 Our small group consisted of Jim, the Prospector, myself and two ladies from Mexico (mother and daughter). We walked the tour of the North Grove backwards so that, as Jim explained, we would not have to go with the flow of folks who were walking by themselves and so we could choose to stop in between the crowds.
The ladies were so cute. Mom only spoke Mexican (Spanish?) and the daughter translated. Mom walked with an umbrella to protect herself from the hot sun. 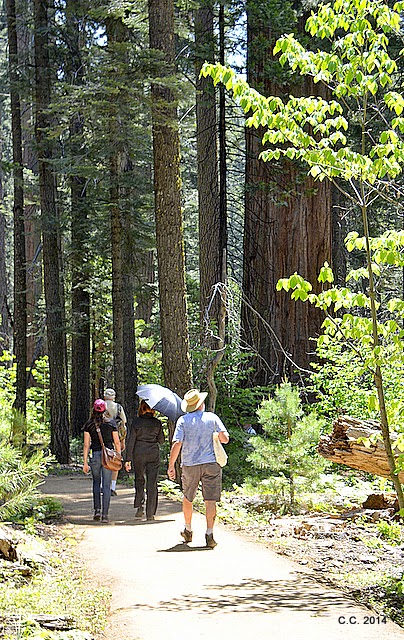 As we passed other folks, Jim would shout out "Hi, how are you. Isn't it a lovely day. Hope you're having a good time." He was so nice to everyone and seems to love his "job". He knew his history and he liked people. Very pleasant man.
We finally walked through the iconic Pioneer Cabin Tree. At one time this was a drive-thru tree. This Sequoia had a tunnel carved through it to compete with the grand and more impressive Yosemite Valley. The tunnel damaged the tree irreversibly. Visitors can only walk thought it now. 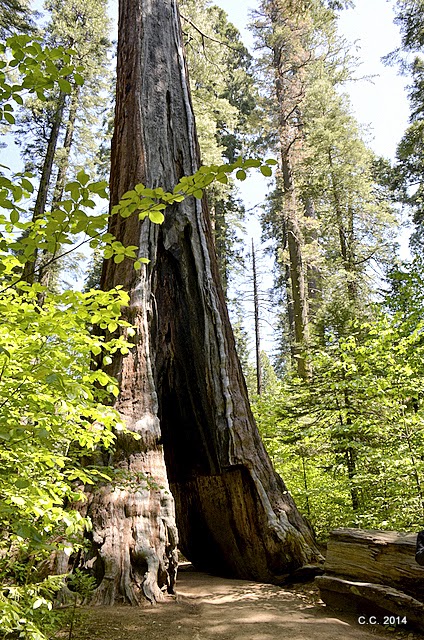 The ladies took our picture in front of the tree. 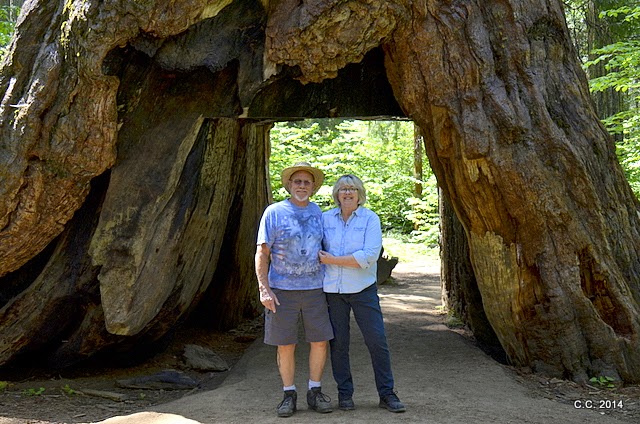 I hope you can read this. 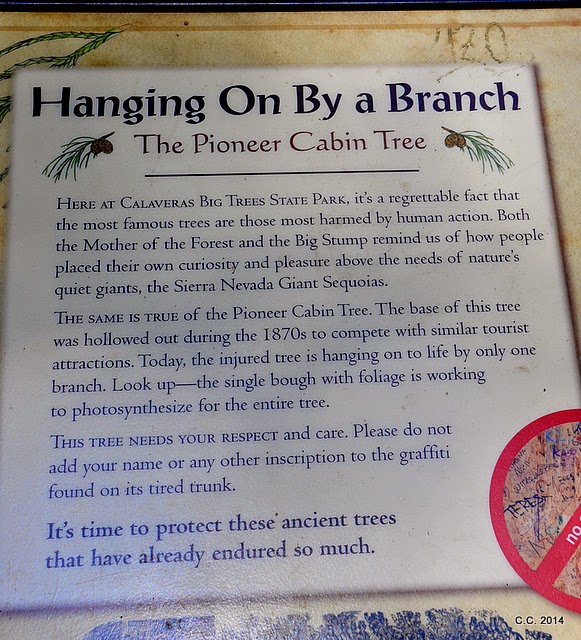 "Today, the injured tree is hanging on to life by only one branch. Look up, the single bough with foliage is working to photosynthesize for the entire tree." It's dying because of man's actions. What a shame.
We saw so many ways that man has damaged this area but thanks to some dedicated people and the State Park system, we may be able to protect these natural wonders from any further damage. 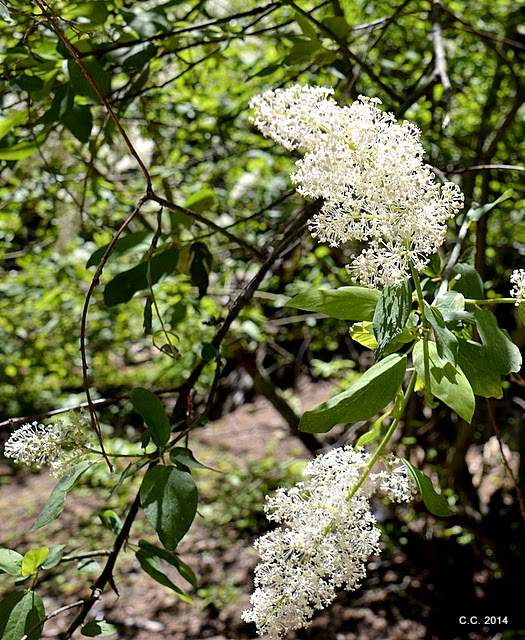 and a small flower 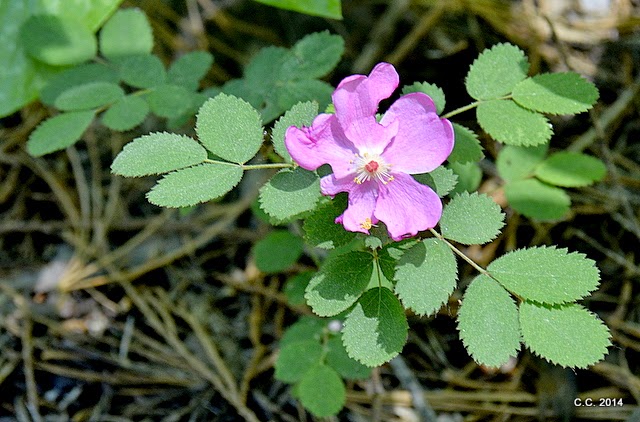 I think this is Wood's rose. Beautiful!
And the ever present Dogwood leaves. 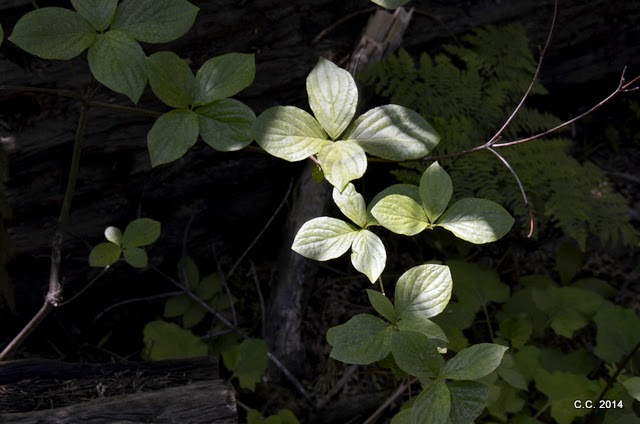 And the multitude of ferns. 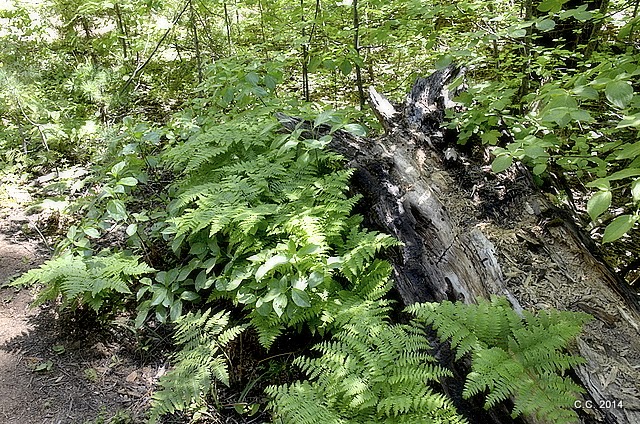 But with all this beauty... the sadness of one tree brought tears to my eyes. Again man, in his attempt to make a profit from nature, did this horrible thing to one of the Sequoias. 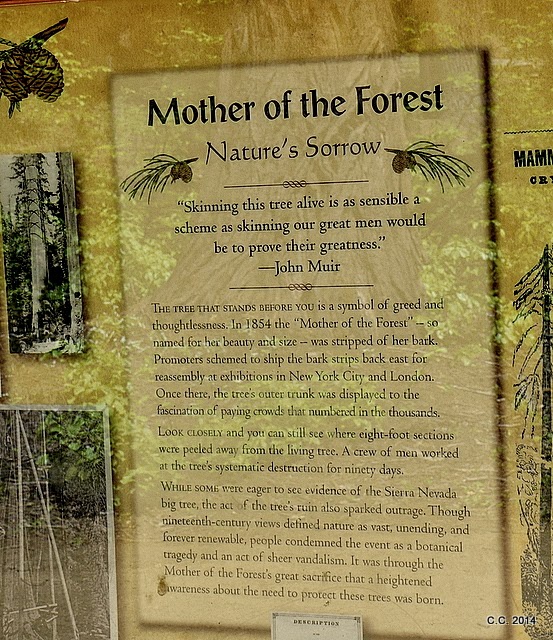 In 1854 this tree was stripped of its bark to be reassembled and displayed in New York and London , as a money making venture. The tree is dead. 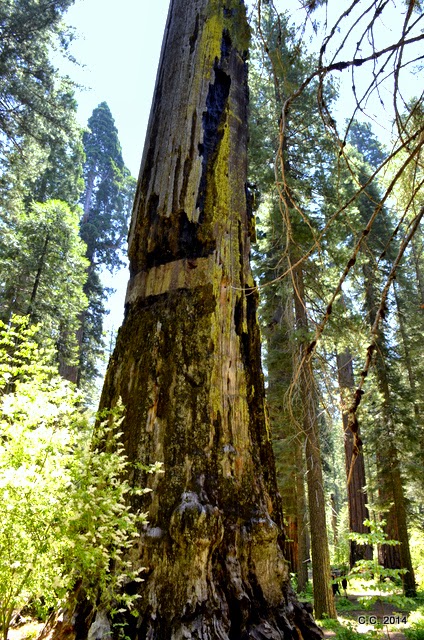 You cannot strip the skin from anything, or abuse it... or starve it... or neglect it... for profit, narrow-mindedness or stupidity. That includes animals, plants and humans. We are all keepers of this world and everything in it and I do believe that if you know this and still do damage... then you will be held accountable somehow.  This once beautiful Sequoiadendron giganteum is a reminder of the shortsightedness of man.

I have more photos and I will finish on a lighter note next time. This was a day of beauty and reflection. It only took us a bit over an hour to drive up there. It was definitely worth it. I can now say I have seen the "BIG TREES" and it was well worth the drive.