Being a bad blogger... for good reasons... kind of.

I meant to sit down and write. I certainly had enough to say... about friends, fires, pillowcases from blogging friends, emails from Montana. But... here I sat with this and that... always saying, "I will do a post tomorrow, the next day, this evening... sure did intend to write something ... I just don't know what happen. Well... yes, I really do... last week anyway.
A few weeks back I got an email from my friend Dawn, who lives in Michigan. She said she was going to be out here, with her husband, for a visit and could she come and see me. This turned into the biggest reunion you can imagine. We had not seen each other since we were 16 years old. It's a very long story about how we found each other again after all these years. You can find it here.
So in the hottest part of summer, with the huge King fire to the north of us and my drought ridden garden looking like it was just about to lose its battle with Mother Nature... Dawn arrived. I had replaced some bedding plants, made up the sofa bed, planned a few dinners, had a long talk with the dogs about their good behavior (she was bringing her dog with her.) and I stuck this sign on the screen door. 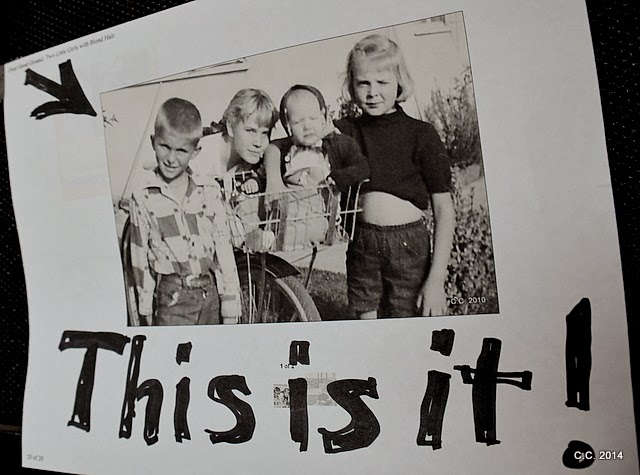 Her husband dropped her off. He waited in the RV while she yelled "Where the heck are you, Connie Mae." and then she made a big scene... crying and everything. My goodness... it had only been 55 YEARS.
We hugged and cried... then hugged and looked at each other... and hugged and cried more. Two old ladies, with a lot of life and distance between them, finally after all those years, seeing each other again. It was quite something.
Dawn is still the pretty, tall, opinionated, noisy person that attracted me to her when I was a little girl. Well... when we were little I was taller than her. I was shy, she was confident. I was afraid to get on the bus and go to school on the first day of first grade and she came over to me, at the bus stop, and asked me if I wanted to sit with her. That was the beginning of a fun and wild friendship.
In Junior High School her parents got a divorce and by the time we were heading for High School she left to live with her mom and brother in another town. I visited her once or twice... maybe more. We had some wild times. Too much so. My mom found out just how much fun we were having (a letter found in my room) and she told me that I couldn't go visit Dawn anymore. When I told Dawn, she got really angry and we had a very bad "parting of the ways". In the next few years we just let go of each other and even though I looked for her over the years, I never found her. She married and had a different last name. I did too.

We spent last week catching up. We talked all day and into the night. It's a good thing that the Prospector was gone on a fishing trip with friends. We would have driven him nuts.
First thing we did was make sure that the dogs were OK with each other. Little lady, Mugs, was not about to let Carl push her around.
She established her territory early on and let Carl and Cutter know that, under no circumstances were they to get up on the recliner with his Dawn. 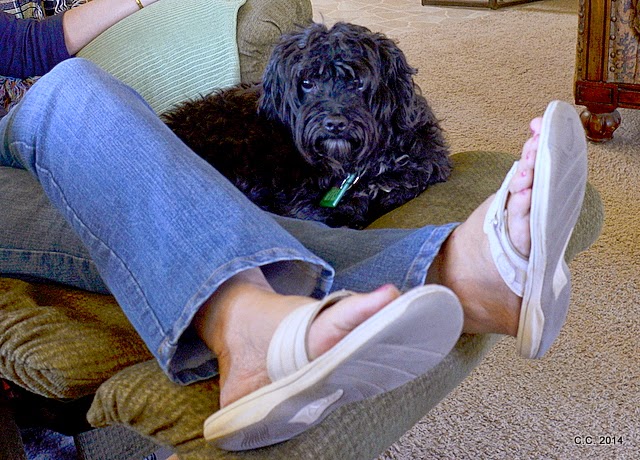 Mugs told my dogs, in no uncertain terms, that this was her person and this would be her chair while she was here. 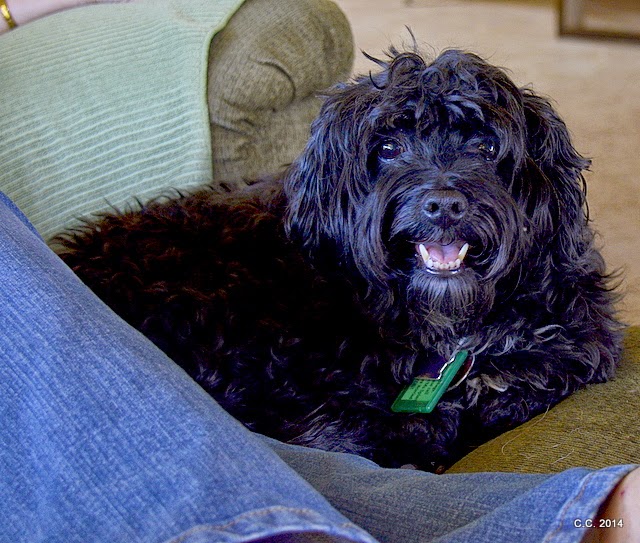 She was always ready for the camera... a star was born.

There were some tense moments but all in all, the relationship between the dogs went well enough that 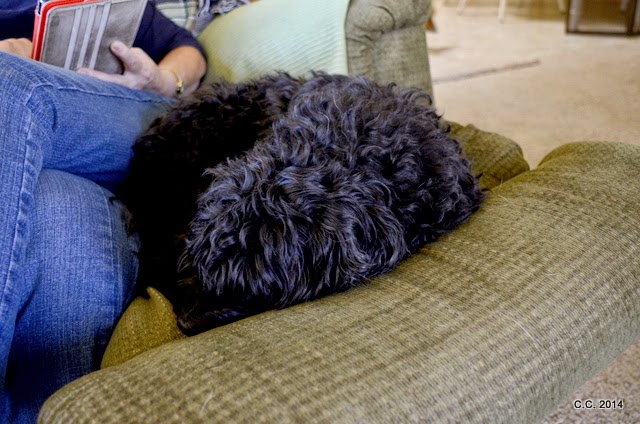 Mugs finally relaxed, curled up and took a nap.

The first day Carl watched some TV , like he usually does, but never moved from his position near Mugs. He was very nonchalant about it all. He always made sure that everything was under control and kept a watchful eye on her. 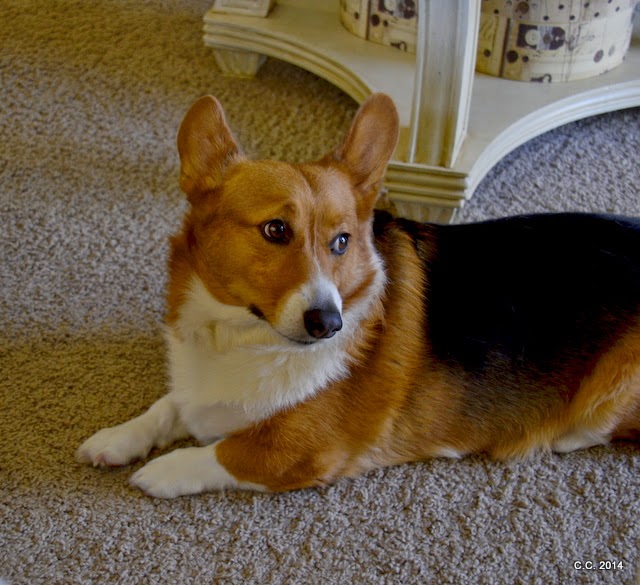 After he realized that Mugs wasn't going to cause trouble, or leave, he move himself to the couch and sat there watching Mugs with that regal "I'm in charge." look. 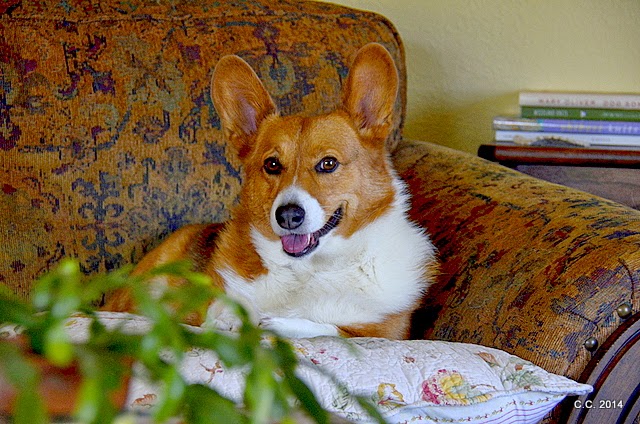 Cutter spent a lot of time right next to me. 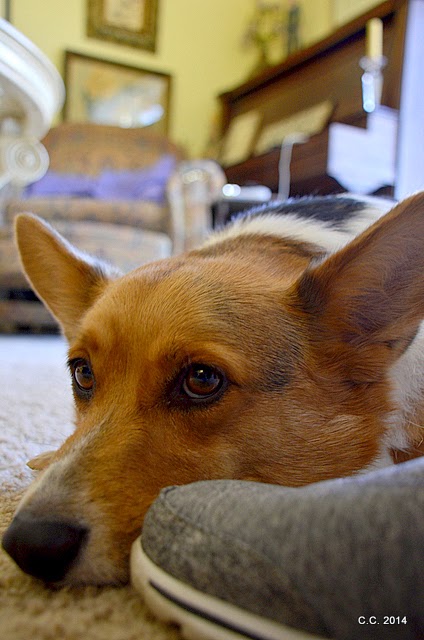 Then, he followed Mugs around ... like a puppy dog. I think he was in love.

We had a great week.
I showed Dawn what was left of our beautiful Mokelumne River and she even posed for a picture... the only one. It was kind of sad that this was all I could show her of a river as majestic as the Mokelumne. 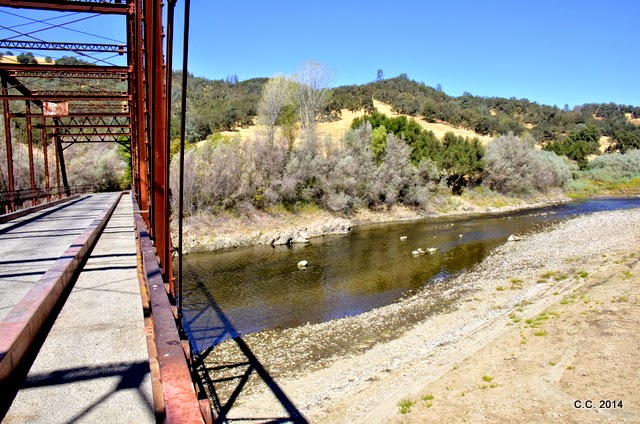 ...the drought has taken its toll.

We spent one day in Sutter Creek. Had lunch and looked at all the stores and galleries. Most of the stores were closed. Business is not very good right now. There were signs in the windows of some shops saying that they were closed because of... lack of people, slow business and sales.
We had lunch and then hit the ice cream store. Oh that Root Beer float was so good.
We bought some fudge. We ate fudge for dessert that night.
Dawn just lost 60 pounds. she looks so good. I think she may never speak to me again. But, we sure enjoyed the fudge.

One day we went to Walmart. We both had things to buy. My chickens need their scratch. They stop laying if they think that I'm not taking care of them like the Prospector does. Even a chicken can get an attitude.

At some point Dawn broke her glasses, so we went to an eye clinic in Sutter Hill.
That is when we noticed the cloud. I knew it had something to do with the fire but it wasn't until we got up on Ridge Road that we saw this huge cloud clearly.
I stopped twice to take some images of this massive Pyroclumulus cloud that was being produced by the King fire. Check this out. Massive, scary and getting bigger as we watched it. 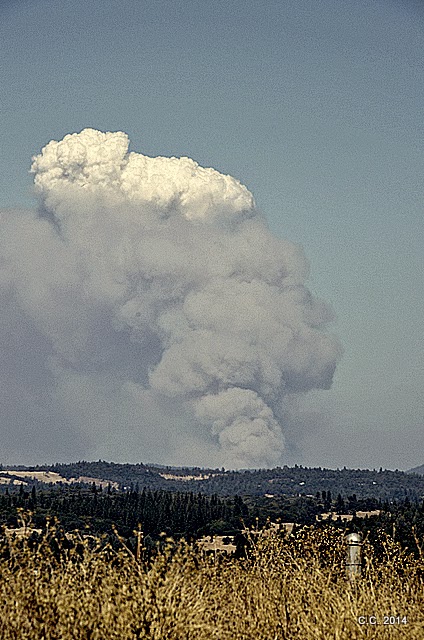 It's one of those "worlds coming to an end" images, with smoke and clouds that you only see over a huge fire. It was actually creating its own weather. Amazing, and beautiful. 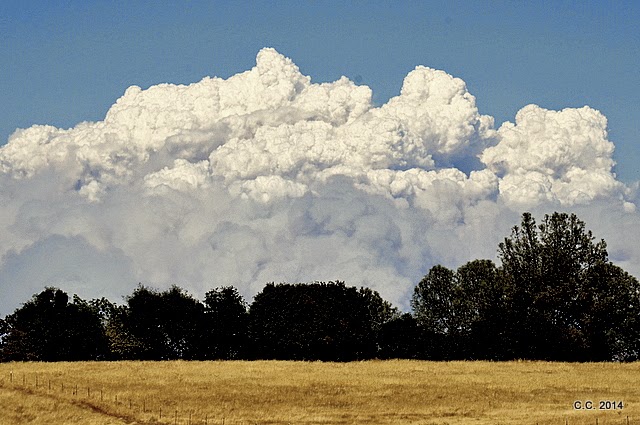 We stopped a few times along the ridge. So were other folks. It was a sight to see.
We are about 30 miles from Placerville and the fire was northeast from there. It started in Pollock Pines on highway 50. They have arrested someone for arson.
We drove up to the Jackson Ranchera Casino. It was very busy. (Doesn't anyone work for a living anymore?) We had confined the dogs together in the backyard for quite a while. I thought that we should go home... so we didn't go into the casino and we didn't loose any money.
We drove home and spent another evening talking about our families and living in Pleasant Hill, CA. in the 50's and 60's . It was a great place to grow up.
On Thursday we stretched the day out until it was late afternoon and she had to go. Her husband asked if I could meet him down at the Walmart parking lot. He had gone to visit with his daughter in Alameda. Guess my steep, dirt road was a little intimidating for his RV. on that first trip up, so I drove Dawn and Mugs down town. They had to be in Modesto the next day and wanted to get there before dark.
We hugged and hugged... and she started crying. she cries a lot... but that's OK.
I told her to text me along the way. She did.
They are heading back to Michigan now, with little Mugs. I think they did an awful lot of driving, but they saw lots of family and Dawn and I got to connect with each other again. That was huge!!
Whats the poem..
.


Make new friends, but keep the old;
Those are silver, these are gold.
New-made friendships, like new wine,
Age will mellow and refine.
Friendships that have stood the test-
Time and change-are surely best;
Brow may wrinkle, hair grow gray;
Friendship never knows decay.
For 'mid old friends, tried and true,
Once more we our youth renew.

I hope to go visit Dawn next Fall. We won't lose each other again.


(I'm leaving tomorrow for a week. Sis and I are going to Art Is You in Petaluma. This is our annual creative workshop we always do together.  I will have lots of photos and stories when I get back and some pillowcases to tell you about.)