Even old earthquake prone, "We've seen it all.", "There's never anything good on the news anymore." Californians can get caught up in a once in a lifetime event like we had this morning.
The Space Shuttle Endeavour said goodbye to the sky and flew over the capital city of Sacramento and then San Francisco, on its last fight, before being taken to Southern California to its new and permanent home at the California Science Center (CSC) in downtown Los Angeles.
I waited outside this morning, hoping that the shuttle, piggybacked on a Boeing 747 jumbo jet that took off from Edwards Air Force Base, would fly up across the Foothills before heading to Sacramento but it didn't. I waited, hopefully... 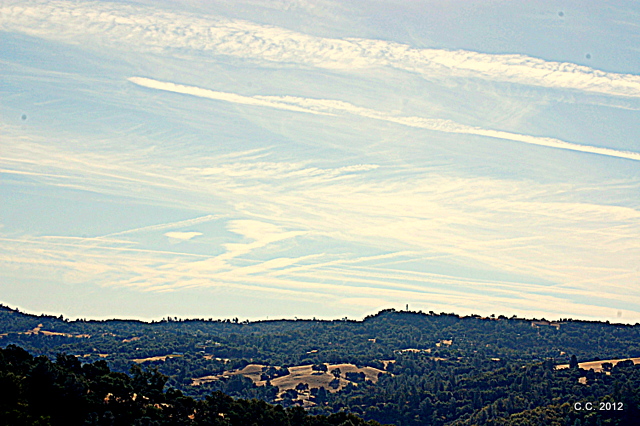 ...watching the skies to the south. But, other than a heavier than usual amount of contrails, nothing much was going on. The California skies were pretty, but uneventful. 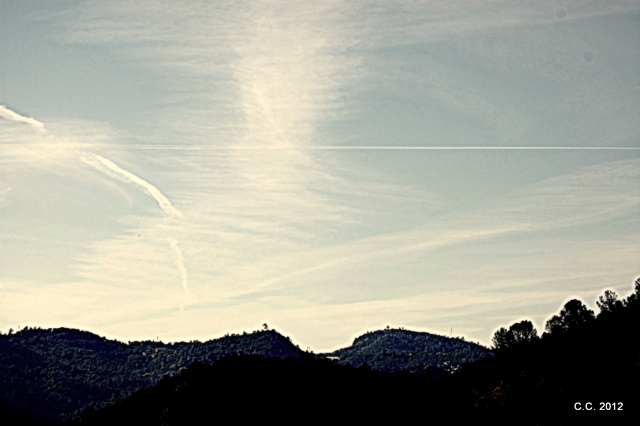 So I went inside to watch the whole thing on TV.
I became hopeful when I heard a large plane flying overhead, but it was one of our old, fire spotting monsters with a prop engine and it was going in the wrong direction.
The Shuttle finally came into Sacramento from the middle of the Central Valley. The excitement was overwhelming for those who could see it coming. I tried to take some pictures of the flight right into our TV, but they didn't come out well. These are the only ones that even look like they have an image. 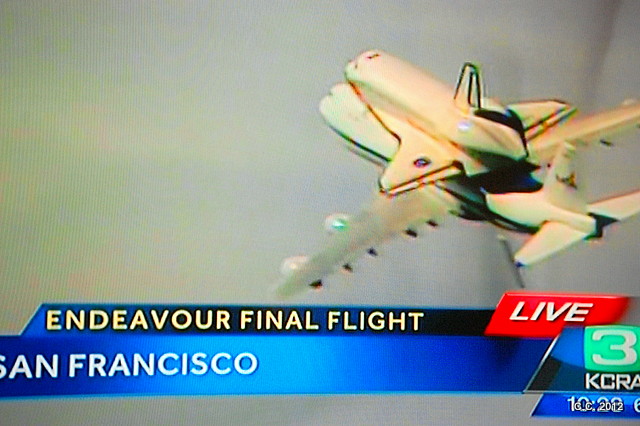 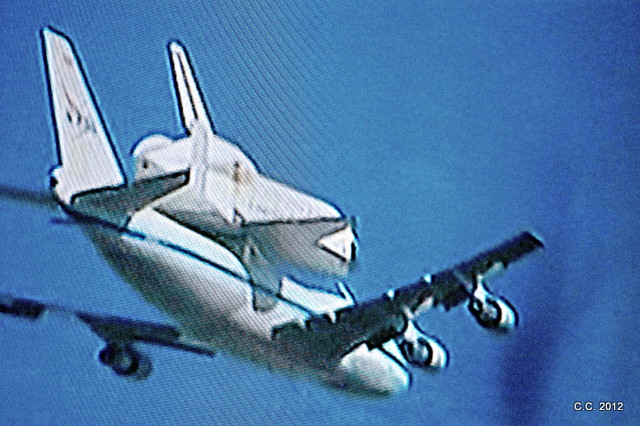 Talk about a piggy back ride.
Most of the photos I took into the TV were blurry and awful. That's what I get for not driving down to Sacramento. But if you go here and here you can see some really good photos and videos of the flight.

I made the mistake of not going down to my friend "C"s house last night and being there for all of this. She said, this morning, that the shuttle went over her house and that, I quote, "I just got to see the Space Shuttle fly over my apartment! It was so huge and so low, and was going (relatively) slow. It was going southwest, after making a loop around the capitol..." She called it "strangely thrilling".

Yes, I blew that one. Should have been down there... with my camera.
Here is some history of the Shuttle. I thought it was interesting that the shuttle was named after Captain James Cook and his ship the British HMS Endeavour ,  the ship which took him on his first voyage of discovery (1768–1771). This is why the name is spelled with the British spelling, rather than the American version. ("Endeavor").
I emailed my son, in Oakland, to see if he saw the shuttle from his place of employment. He wrote back and said that he was in Los Angeles and was hoping that he would see the shuttle before he left the airport down there. Hope he gets some pictures. My other son works in San Francisco. I'm sure he got to see it too. Wow! I'm feeling like I missed the boat up here.
While I was waiting outside this morning, I did see the orange, double winged dragonfly again. Does that count? 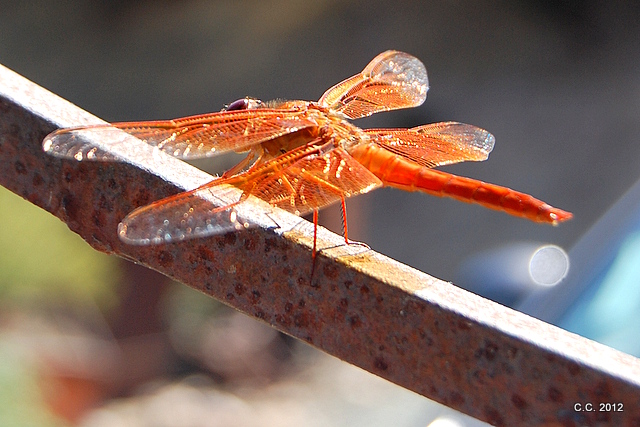 It was probably waiting to see the Endeavour too. One natural beauty and one created by man. Both astounding. Both amazing...

The Prospector and I drove down to the valley and stayed overnight, in a HOTEL, on Saturday. 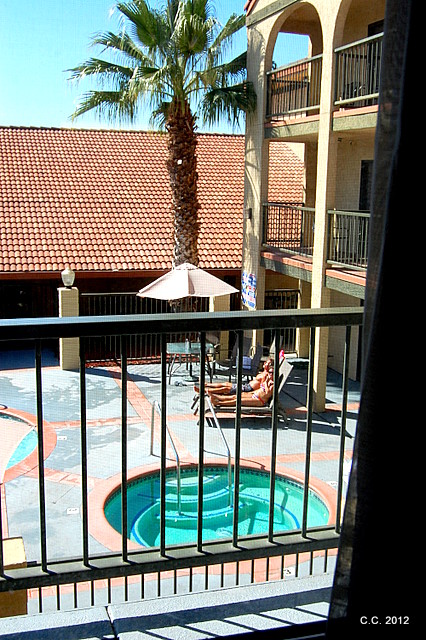 A very nice hotel, with a swimming pool and a hot tub.
Why did we leave the farm? Why did we leave the dogs in a kennel overnight and venture down to the town of Manteca in the great central valley?
Because 50 years ago, the Prospector graduated from Manteca High School and we were celebrating the occasion with a PARTY.
Yes... FIFTY years. It was 1962.
John F. Kennedy was our president.  No one had been to the moon yet, but John Glenn was the first American to orbit the earth. The average home cost $12,500. and a gallon of gas was about .28 cents. We went to the Drive-In movies to see West Side Story and To Kill A Mockingbird... and "make out". It was a good time to be a teenager. 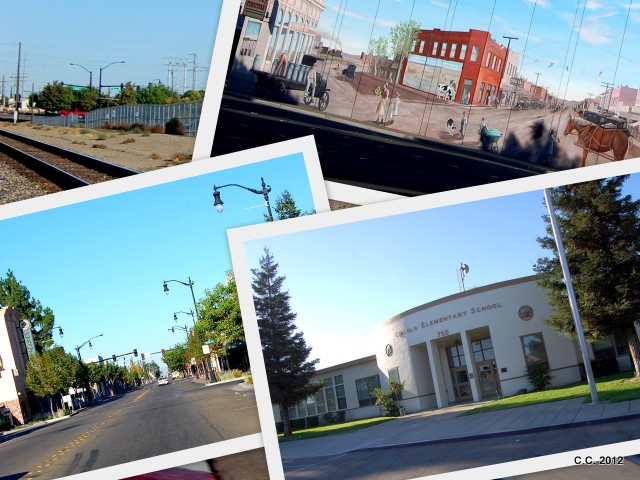 Manteca was a small farming community between Stockton and Modesto. Today the railroad tracks still run through town and the old Lincoln Elementary School, where the Prospector went, is still teaching children everyday. Yosemite Ave. looks better than it use to and has murals of Manteca at the turn of the century on some of its buildings.
We arrived at the Golf Course on Union St just in time to sign in, get our pictures taken and start meeting all the "old" folks that were walking around looking for signs of recognition. It's a good thing that they not only gave everyone name tags, but they also had the good sense to put a photo of the person on it from the yearbook. Everyone that walked up to us looked at the name tag first, then the lights would go on in their eyes. "Oh, it's ... my gosh, you look great.", and they would smile and give the Prospector a big hug or a hand shake. He was on the reunion committee so he did know quite a few people, but there were a lot of people that were total surprises. That's the fun of a reunion of 50 years. 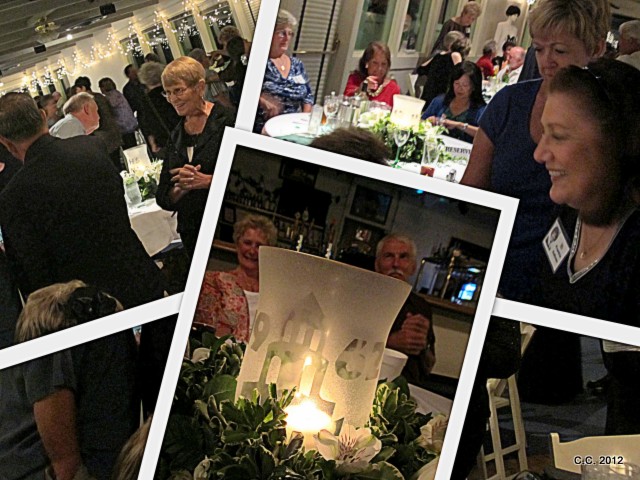 It was quite dark in the room. I brought the little Canon point and shoot, instead of my big Nikon, so a lot of the pictures didn't turn out well. But we had a great time and it was a beautiful evening with good food and "happy to see you" ambiance.

The next day we met everyone for breakfast and then drove to the Manteca Museum. This was an amazing place. 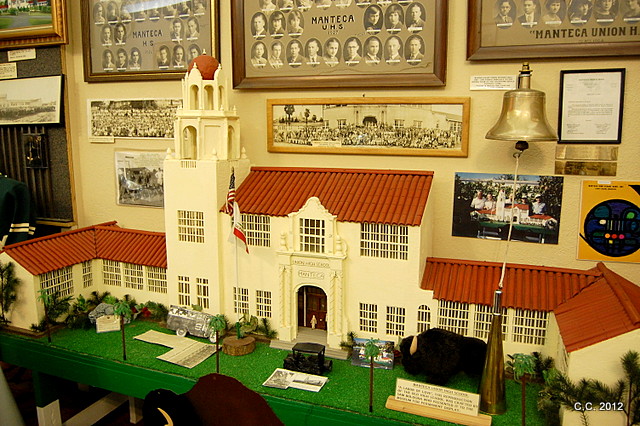 It's an old church that has been revived and filled with everything Manteca has done for the last 150 years or so. This photo above is a replica of the old, original high school. The walls were covered with class pictures from the very beginning. 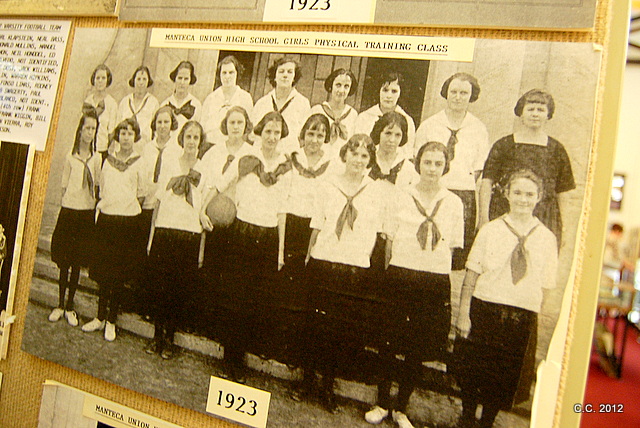 This is a PE class in 1923. Can you imagine wearing a skirt and stockings to play sports? Life was definitely different then.
There were all kinds of rooms filled with what life was like in the 1800's. 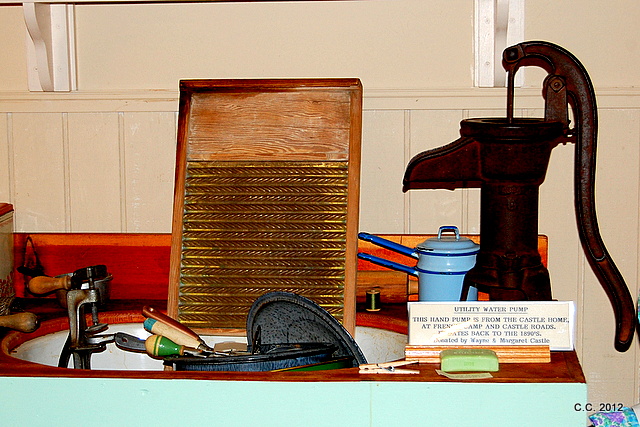 You know. What they called "woman's work". And it was. 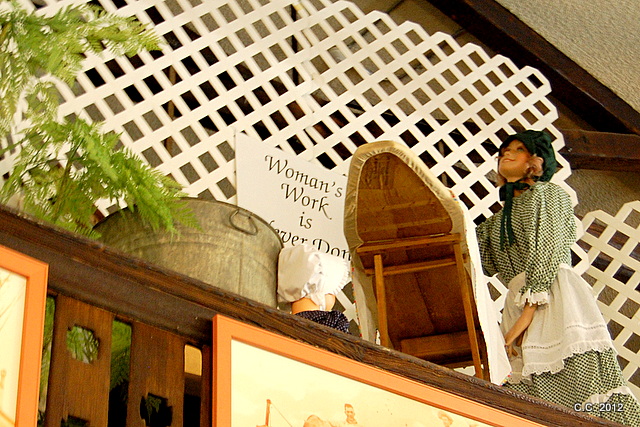 Look at the smile on that "dummy's" face. She's happy and she's ironing. What's wrong with her?

Even when it was a new invention, it was still a lot of work. This washing machine below, still used buckets that had to be carried, emptied and cleaned out every wash day. 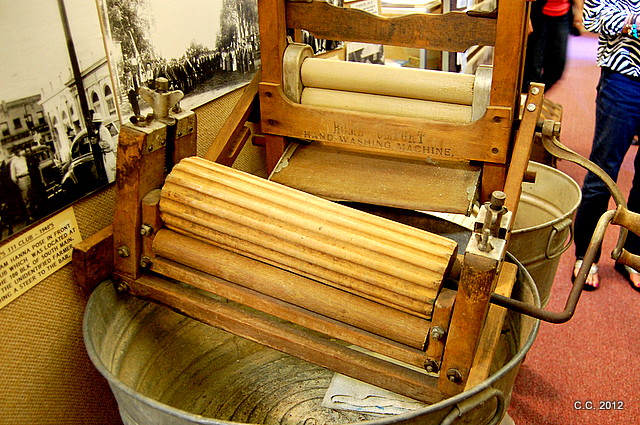 Then, as I was contemplating the efforts of my grandmother and her dislike (hatred) of housework, I looked up on the wall.
There, before me, was a familiar face. 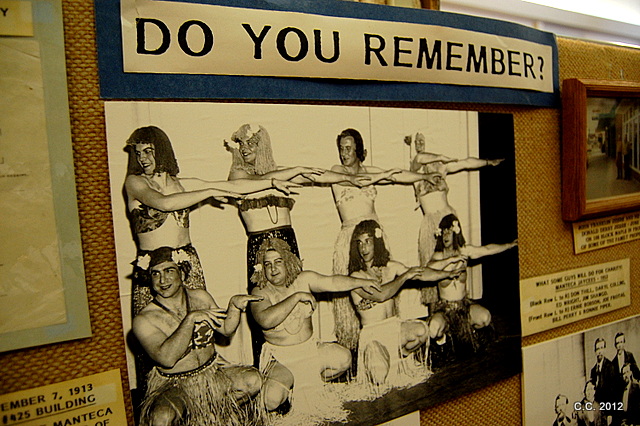 There on the wall, for all the world to see, was a picture of my staid and rather stern father-in-law, doing the HULA. He is the lovely one, second from the left in the back row... with the blond hair.
Yes, it was him. 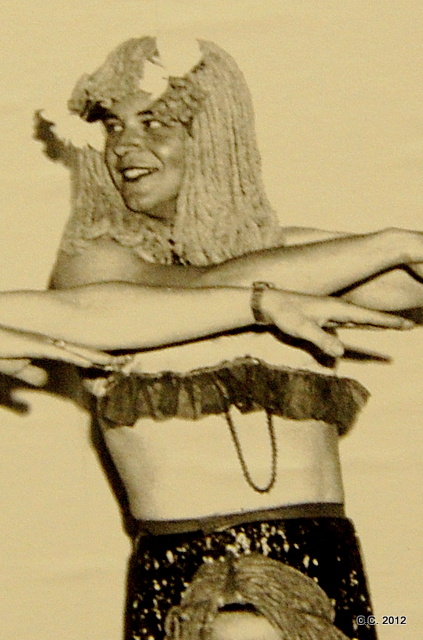 He was 33 years old and doing a skit for the Manteca Jaycees in 1952. Oh my gosh!! I never pictured him doing anything like this.
But there were moments, years later, when he would say or do something that would make me think he was still a little boy... and his blue eyes would twinkle. I never saw him like this however. I don't remember him ever being a skinny dancer with a blond wig.
I met him 10 years later, for the first time, and life had settled him down a bit. He was a good father-in-law and always treated me with respect and love. In 1968, in a hospital room, the night I gave birth to his first grandson, he quietly put his head through the doorway and whispered "Thank you." to me. I was scared, hurting and not quite ready for parenthood. Those words made such a difference to me. That was a moment that I will never forget.
He was a good man. He died too young and we all miss him.
So... to see this serious, and sometimes harsh, man dancing in drag at 33 years of age was astonishing, to say the least. He looks like he was having a great time. The Prospector said he kind of remembers his dad doing this, but he was only nine years old at the time and the memory is vague. We all had a good laugh over the photo. It was a moment in the history of Manteca that surely gave some of the town folk a good laugh too.

The weekend is over. I'm kind of tired and have sore feet from dancing (very little) and standing for long periods of time in "fancy" shoes. But it was a great reunion and we all decided that we better not wait another 50 years, for the next get-together, because there might not be anyone left.
We drove home Sunday afternoon and picked up the dogs.
Everything is back to normal. The weather is cooling down, finally, and the fancy duds are back in the closet.
This is us... at the reunion. 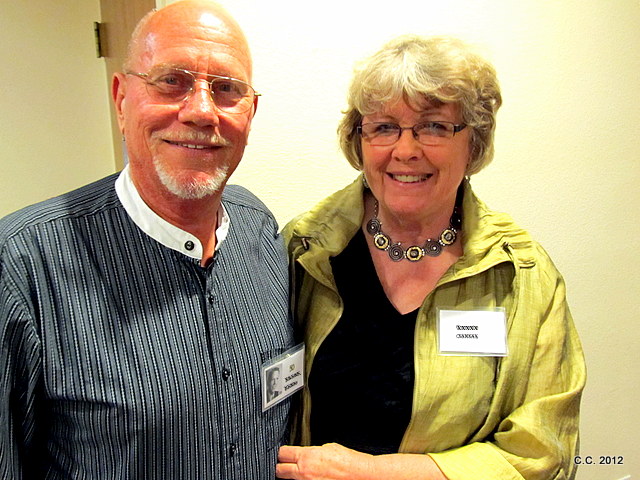 We clean up pretty good, don't we?... for a couple of old, farm folks.