A unique sculpture in Lafayette, CA. 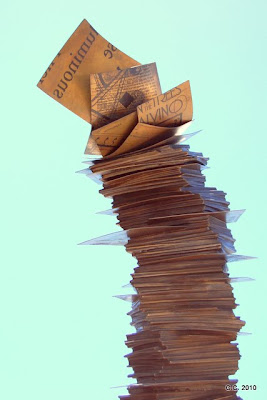 This is one of the most interesting sculptures I have ever seen. When I was at my sister's house a week or so ago, we drove downtown to see the new library and this sculpture.

The sculpture, called "Speechless" by Brian Goggin, is in a courtyard on the backside of the library. 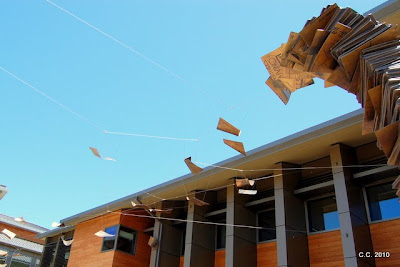 The pages are flying over the courtyard and into the library. 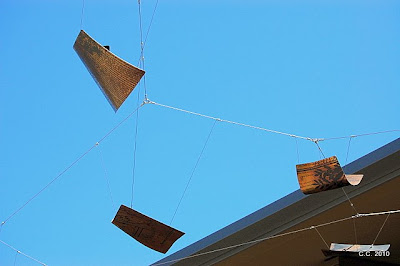 The pages are suspended on wires and look like they are flying around. You don't see the wires unless the sun hits them, but even if you see the wires it's still kind of magical. 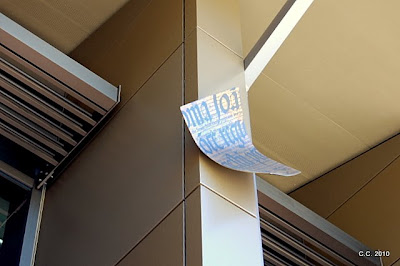 One page was sticking to the wall. 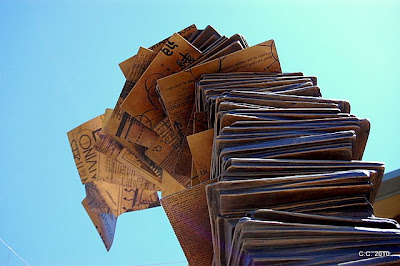 If you stand really close to the stack of pages, you feel like the whole thing is going to fall on you which is, in a way, what books and words do. They fall on your imagination.  It's so visual.
I finally found some information that gives a really good description of what this sculpture looks and feels like.


"Set against the new Lafayette Library a giant wavering bronze stack of paper rises. Had one taken a page from every book in the library collection – stacking one on top of the other – a stack of paper equivalent in height to this sculpture would result. The towering sculpture winds and teeters reaching absurd, precarious proportions. Wind has caught the top pages blowing them across the outdoor plaza, up and through the stairway corridor. Some pages furl in mid air, flying above the walkways while others wrap around trellis posts, past the library walls. Each fluttering page is precisely etched with “drawings” created with layers of text and graphics from the library’s books. The pages glide through the walkways creating a visual flow inspired by the natural air currents streaming through architectural gullies and star and planet constellations.
The bronze pages allude to all pages ever printed. The etched pages use as their pallet imagery scanned directly from books drawing from all sections of the library’s book collection such as philosophy, literature, math, poetry, history, biography, science, and of course art. The dispersing pages fluttering out from the toppling stack is inspired by the library collection’s grand expansion in size and new knowledge platforms beyond books. The expansion is visually alluded to in this site-specific installation – the concurrent transformation of how we learn is captured by the dynamic, dreamlike flight of the bronze pages wafting gracefully through the air."

I want to thank Scott Beall at : http://laughingsquid.com/speechless-site-specific-public-art-installation-by-brian-goggin-at-new-lafayette-library/  for the above description.I couldn't have said it better.
If you're ever in the San Francisco/Oakland/Berkeley area, you could take a short, beautiful drive to Lafayette and check out the new library... and this statue. It's worth the trip.

No Wordless Wednesday Today. I have things to tell you about. 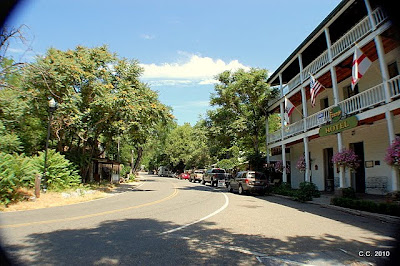 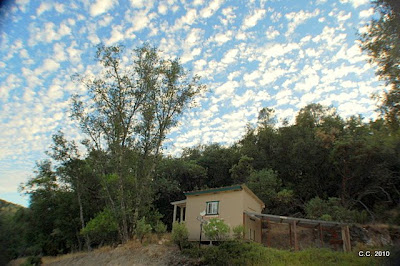 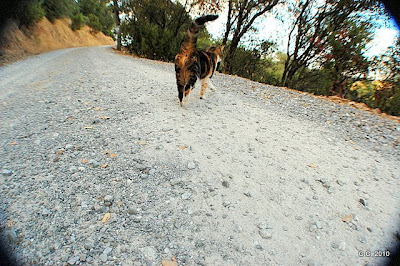 I have to tell you about this new wide angle lens I sent away for. The three photos above, were taken with this lens attached to my Nikon D40 camera. I bought it from New Harbor for...are you ready? $12.38 . It's not a brand I have ever heard of. It's called Neewer.  It's a digital high definition 0.45X super wide angle lens with macro Japan optics. It came with caps and a bag. I don't know how they could make this lens for this price but I don't care, because I'm getting some very interesting photos with it and if it falls apart tomorrow, I won't be crying about the price. I know good lenses are suppose to be very expensive but what the heck. I'm having fun with it and that's what being a photographer is all about. 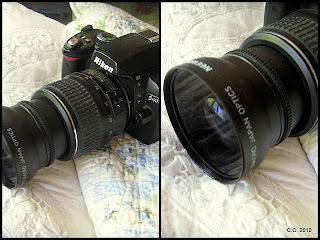 This lens fits right onto the front of both my Nikon lenses and takes in a wider angle of  view. The only difference I can see so far is, that with landscapes, the foreground  is blurred a bit but the center is very sharp. I don't look at this as a disadvantage because I like the effect.  The outsides of the photo angles in and the focus is in the center. This makes for some very interesting shots. It doesn't work with close ups but I can leave the lens on and it doesn't interfere with closer shots.
It's the cheapest fun I have had in a long time. 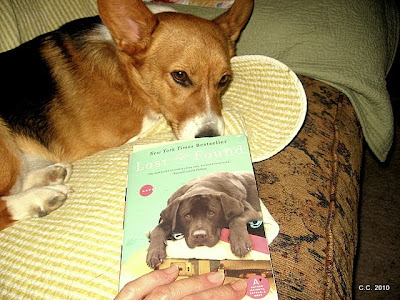 I have a confession to make. I have not read a book for at least a year. I KNOW! I can't believe it either. I have a pile that I want to read. I have another pile that friends have given me saying..."You've got to read this. It's the best book I've read in a long time." I have no excuse. I just haven't read ANYTHING.... until last week. My friend "D", from Montana, was here a year ago when my Mom died and she bought me two books. One of them was Lost & Found by Jacqueline Sheehan. I started it a few times and them put it down. Finally, last week, I picked it up and made a promised to myself  that I would finish it. I did.
It was wonderful...."You've got to read this. It's the best book I've read in a long time." (sound familiar) If you like dogs, want to change your life, or have lost someone that you loved dearly, you must read this book. It's about grief and the process that one person goes through. It's a love story between a woman and a dog...both wounded animals, both learning to trust again....and sometimes it's from the dogs point of view, which I love. It's about human frailties and how we can all learn to love again, no matter what happens to us. It's a great summertime read.
Thank you "D". I finally understand, my friend. It has taken a whole year, but things are better. 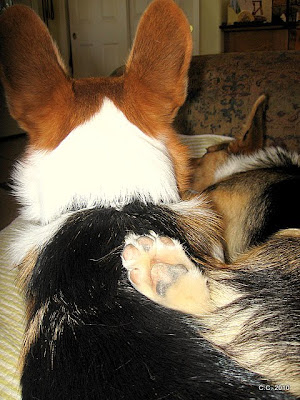 Carl and Cutter, two little Corgis that are becoming  friends. The paw says it all. Carl wouldn't let just anyone do this.
Have a good rest of the week.....
Posted by farmlady at 11:09 AM 8 comments:

Kiss the Joy as it flies... Blake's kind of morning.

The tomatoes are starting to turn red. Isn't this amazing? Give this heat loving plant the summer heat it desires and "Voila!", red tomatoes. 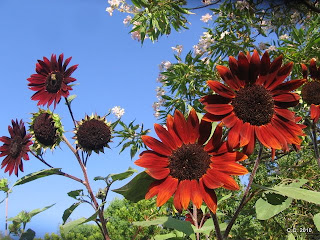 And so it is with the Moulin Rouge Sunflowers. They are happy with the summer heat and every morning they turn toward the East, as this radiant orb casts its light upon the farm, as if to proclaim the sun's arrival. Do flowers have rituals? Do they know what sustains them? 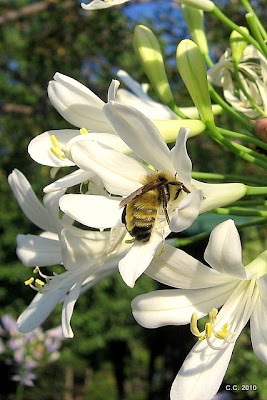 This bee is so beautiful against the white Agapanthus. It was early and many of them were still sleeping. What would it be like to sleep in a flower. The fragrance would be delightful. How do they hold on while they sleep. 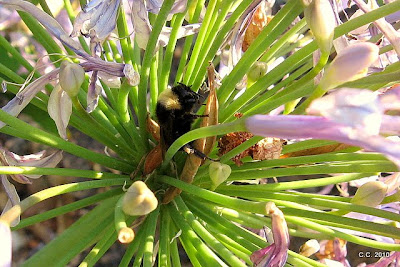 My favorite bee is this one.... it's friendly and seems to like having humans around. They never get upset and I have had them crawl onto my hand without stinging. It's a bumble bee but I'm not sure what specific kind. Maybe a Golden Northern.

This one loves the lavender. It's smaller than the black one and is probably a common Honey Bee. Very industrious, busy and brilliantly colored. They don't seem as friendly and when I started taking pictures this one buzzed and flew right at me, landing on my tee shirt. It stayed long enough for me to get a photo of it, then flew away, as if to say..."Don't get so close next time." 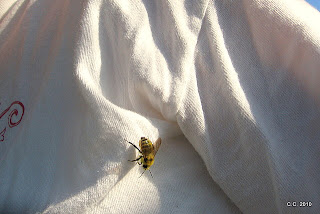 I guess it was just as curious about me as I was about him. Did you know that by passing food mixed with saliva to one another, members of a hive can chemically bond with each other? Is that like French kissing in the bee world? Did you also know that settlers brought the Honey Bee to North America in the 17th century. Just another immigrant, like my great-grandma. I love this stuff.

Take a good look at this photo. My morning shadow made me look thin.  Thank you morning sun for elongating the shadow of my body and giving me a sense of slenderness that I find endlessly difficult to achieve in my everyday existence.
And as a parting shot..... Carl, the original "finders, keepers, losers, weepers" dog that The Prospector says "...does no wrong.".
I forgot to pick up my garden gloves and Mr. Opportunity found one of them. He would not look at me or drop the glove.  I had to chase him around the yard. I was so close a few times. But he would dart away when I got within reach of "his" prize glove. I finally grabbed him and got the glove. He seemed insulted. The other glove was missing. So was Cutter.... and Carl wasn't talking.
I finally found the other one in the house, on the table, where I had taken it off....Cutter was sleeping on the couch. How could I have blamed him for taking the other glove? Easy.... Carl is teaching him everything he knows.

Every child comes with the message that god is not yet discouraged of man" ~ R. Tagore~ 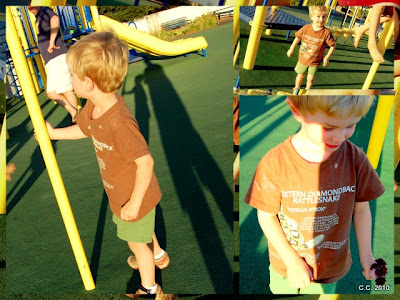 "We find a delight in the beauty and happiness of children that makes the heart too big for the body." 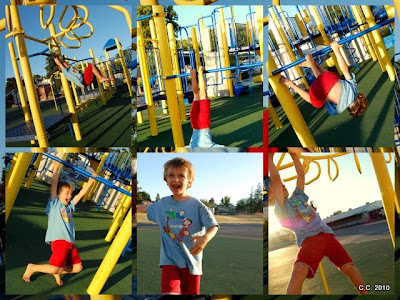 At particular epochs of their life, children reveal an intense and extraordinary interest in certain objects and exercises, which one might look for in vain at a later age....Such attention is not the result of mere curiosity; it is more like a burning passion."
~Maria Montessori~ 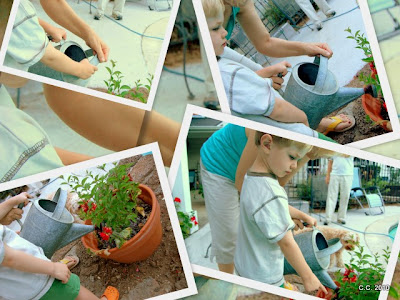