Wordless Wednesday... “...in that dilated moment after sunset when the sky holds all the light...” ~ David Wroblewski 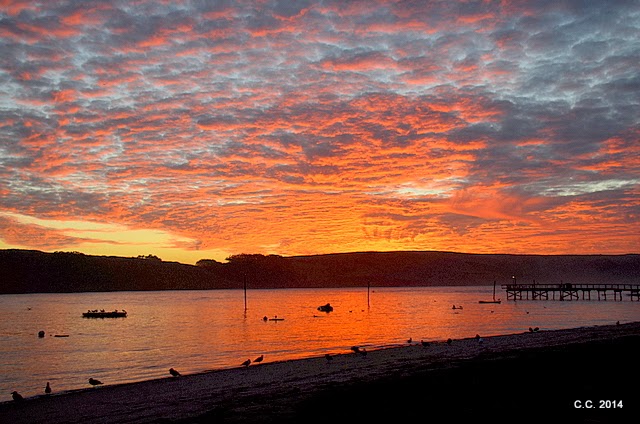 Labels: Lawson's Landing in California, sunset on the Pacific coast

Feast or Famine... no middle ground.

We asked for it. We wanted RAIN. We did dances and said prayers... and feared the summer. Well, someone was listening and someone, possibly Mother Nature, decided that we needed a reprieve from all the worry for a while. But, good grief!! I'm not sure how long this rain will last and it's wonderful, but by about 3:30 p.m. this afternoon, I was going out of my ever lovin' mind. The rain has been non stop since Friday and we needed a break. After all... this is California.
So, this afternoon, I put on my raincoat and my boots, took my camera and told the Prospector that I was goin' crazy, so I was goin' for a walk. I asked the dogs to come too. They were reluctant. They don't like getting wet, pedigree Corgis that they are, but they finally came out with me... only out into the garden to relieve themselves... and then... back up onto the porch again.
The minute I stepped outside I heard the creek at the bottom of the canyon. I stood at the edge of our garden and listened. The creek was roaring. 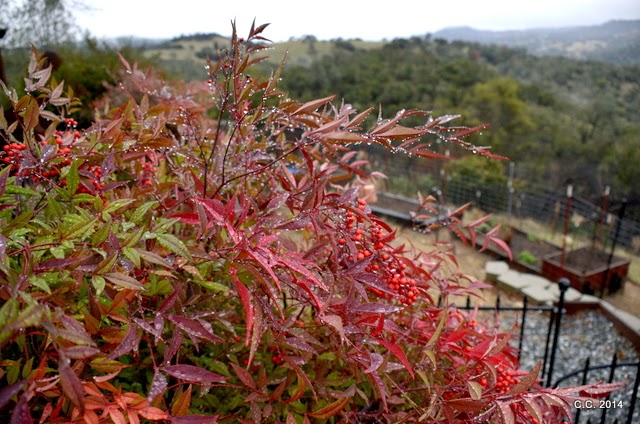 The rain stopped for a few minutes. I walked out to the driveway and picked three daffodils that had chosen to bloom during the last few days and were suffering from the drenching rain. 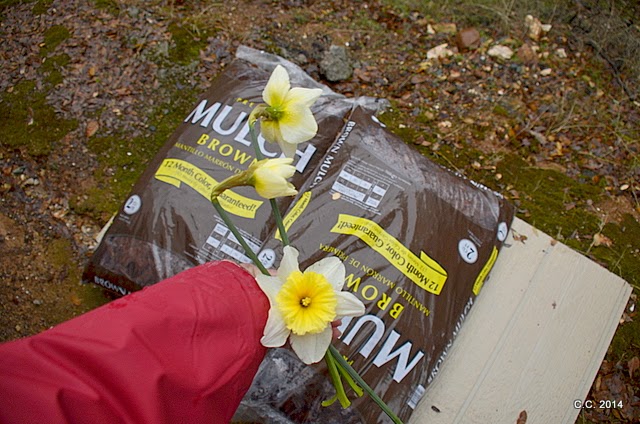 Poor lovely flowers. Reminders of Spring. I needed to save them.
The old '38 Chevy was right behind me watching me hold the daffodils and take pictures at the same time. 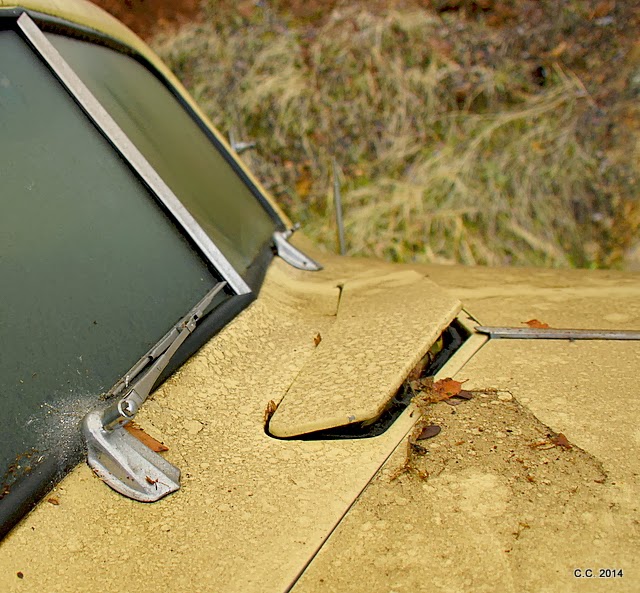 She has been very neglected since the Prospector bought the RV. Even though we keep her under a tent like plastic cover, she is a mess. I think she has a cold. Her eyelashes don't look good and it looks like she threw up recently.  I know this isn't anyway to treat an old lady. We have talked about selling her this summer. It's very expensive to restore these ladies to their former beauty and the Prospector has lost interest. After all of my jealousy and inappropriate comments about her when she first came here, I feel kind of bad.
I will give her a bath when the sun shines again. She's still a beautiful car, even with all the dirt and rain. She deserves better. She deserves to be restored.
See this post about the day we bought her... here.
And the day we brought her home... here.

It started to rain again, so I decided to not take my camera up to the well and back. Too much moisture. I could walk again, later, without it... or tomorrow. So I headed back to the house.
The dogs were waiting, on the porch, and ran out to great me. I let Cutter smell the flowers. 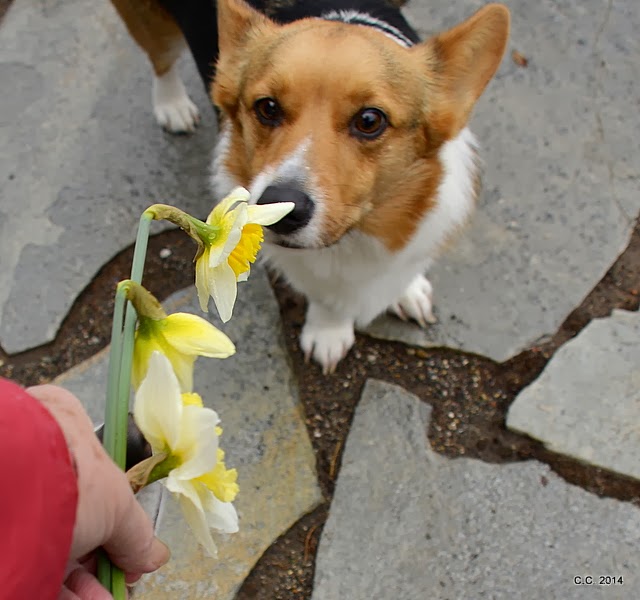 He can be so adorable. I thought he was going to eat them... but he just nosed them and backed away. When he determined that it wasn't a biscuit... he lost interest.
The rain started getting serious and both dogs went into the house to be dried off by the Prospector. It's a game Carl likes to play. "You dry me off and I try to grab the towel." He loves the tug of war.
I walked around the garden for a few minutes. One of the garden ladies was looking quite Zen in the planter. 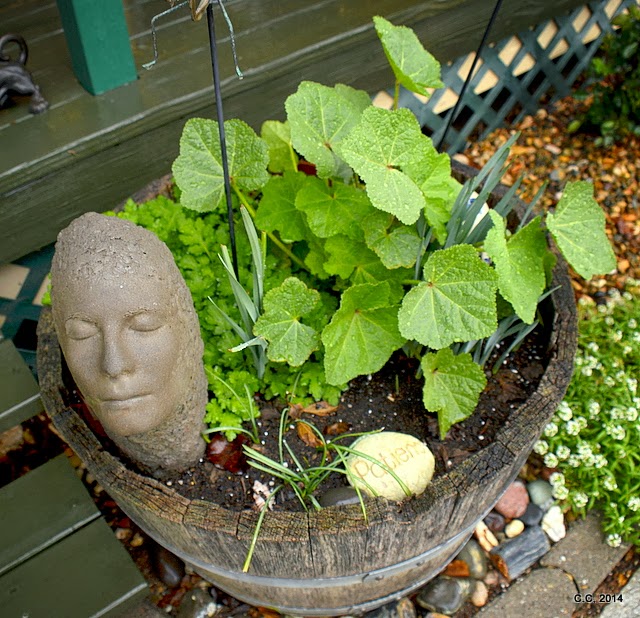 I cut the chrysanthemums and the holly hocks back to the ground before Christmas and look at them coming back up. The rest are (I think.) some paper whites and maybe, in the front, some blue hyacinth or Crocus. To be honest, I don't remember what I planted there. Bulbs are always a surprise for me because sometimes I write down what I plant and where... but, not often enough. If they are in there for more than a season or two... then I forget and it's a happy surprise in the Spring.
OK, I probably wrote down what I planted the first year or two that we lived here. That was sixteen years ago. After that... Who knows.
The hummingbird wind chimes are calling the hummers... 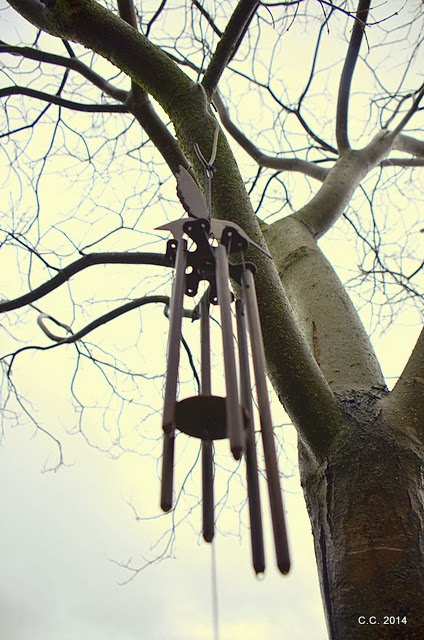 ... but they must be weathering the storm in a sheltered place. Haven't seen any for a week. Yes, a few stay all winter here. It's mild enough and we feed them.
The donkey, like the Tin Man, needs an oil can. 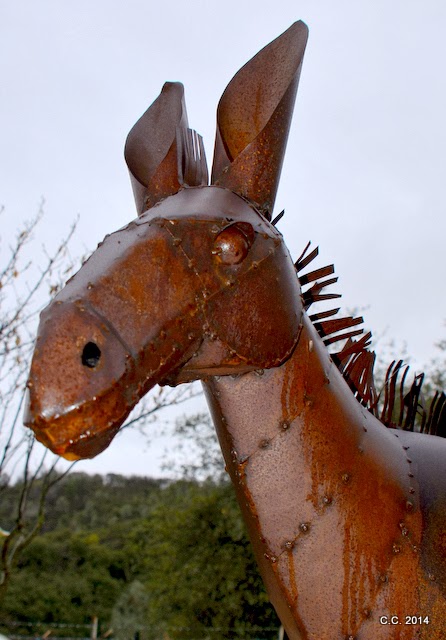 He hasn't moved from this spot for two years. I think he likes the garden. I will make a hat of daffodils for him when there are more of them blooming.
It started raining heavily... so I went inside the house and found something to put the flowers in. 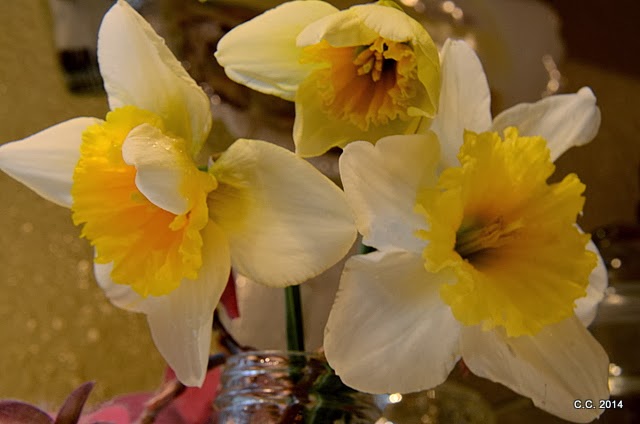 Daffodils brightened up the whole kitchen. They don't have a strong fragrance but they are so beautiful.
Maybe tomorrow I will walk down the road and take some pictures of the roaring creek for you. Should be a wonderful walk and maybe I will run into some other interesting sights as well... like a salamander or something.

These Daffodils are for all of my friends who are neck deep in snow and are tired of being cold.
I know that this has been a long winter for you. Think Spring... it will come.