This is called an "info" blog. I need to get caught up on some things that people have asked me in my blog's comments or blog related e-mail.

#1. To Ann (of vintagewhisper.blogspot.com): I don't have a favorite strawberry jam recipe because I don't make jam very often but the one I used for my wonderful, sweet Lodi strawberries can be found at: tomsdomain.com/recipes/strawberryjam.htm. It was easy and called for the amount of strawberries that I had. I didn't use wax. I just filled the hot sterile jars with jam and sealed them. The jam doesn't last very long around here anyway, so I don't have to worry about a "long shelf life". I just think doing both is overkill. Also, the jam is more saucy than I like. It's got a really good flavor but is more like a sauce for ice cream. I followed the directions to the letter, so I'm not sure if this is the way it's suppose to be or not. If you follow this recipe please let me know how it turns out. There are many, many more recipes for jam out there in computerland. There's probably a better recipe .

#2. Who was watching American Idol? My favorite "David" won. I don't care how many people wanted David Archuleta to win. David Cook won by 12 million votes, he did!... and he deserved it. The guy is so good. I'm really glad that common sense reigned .

#3. Our first rattlesnake showed up a little over a week ago during that hot spell we had. It was in the pile of oak rounds that the prospector was spliting up. Because I wasn't here to plead it's case the snake is now in snake heaven. We both have mixed feeling about killing the rattlers,(we used to have a catch and release policy) but the truth is that we have a lot of them around here in the summer and when you have animals, that live and play outside, you can't afford to let these beautiful snakes roam around anywhere they please. We spent over $1000.00 last summer at the vets. Both dogs were bit on their noses. I wasn't here, but when I heard what had happened, I came home from my mom's right away. The prospector left two days later for a trip , and proceeds to tell me that he didn't find the snake..., so I should be very careful.
Well, as soon as he left I got the shovel, a bucket and the water hose and went on a witch hunt. As I walked around the corner of the house here comes a small rattler across the dirt, moving toward the deck. I followed and before it could get under the deck I used the shovel in a very un-ladylike manner. Because of the planters, soaker hoses and other garden objects I missed it and it turned around, slithered behind a large planter and (honest to God) disappeared. I saw a hole under the wine barrel planter so I turned on the hose full strength and stuck it into the hole. The prospector told me later that you can't drown a snake. Well, the snake never showed up again and I like to think that it went to snake heaven that day or that it found an escape route and left because of our lack of hospitality. Whatever happen, the snake did not return. A part of me thinks that it will come back this summer...., bigger, more dangerous and looking for the "shovel" lady. The other part of me thinks that it didn't make it...., but there will be others. Maybe he grew up and was waiting for me under the wood pile. We are on alert now. It's time for their return.

#4. Did anyone watch the P.B.S. miniseries called *Cranford* on Masterpiece Theater? It was wonderful. It's about a small English village in the 1840,s. One of my favorite actresses Judy Dench starred in it and all the other actors were excellent. Some of the funniest episodes were: One about a cat that swallows an expensive lace collar and the town women waiting until it comes out of the other end of the cat. Another is about a cow that they make pajamas for because it fell into a lime pit and lost all of it's hair. This kind of humor is mixed with very serious stories about love, morals, life and death in this small town. I learned a lot about English life in the 1800's. If it comes on again ,and you missed it , please watch . It's really good! I'm not one for English humor but this is done so well and all I can say about the costumes is......, "amazing".

My two little bambinos are coming tomarrow, with their parents of course, so I may not write anything. Maybe I'll do a photo blog in the morning. We'll see. Goodnight all.
Posted by farmlady at 7:24 PM 1 comment:

I haven't talked about my feet before but they are chronically ill. Feet are not usually a topic for conversation but I think mine deserve a moment of respect. These poor hard working parts of my body have held me up for over 60 years and I have decided that they deserve some special recognition. They have arthritis, multiple neuromas and a recent operation to fix a bone in my right foot, that was growing in the wrong direction ,still gives me fits. During the operation they also removed "bone debrie". Sounds like a compost pile, doesn't it? Most of the time, by the end of the day, they hurt. I usually soak them and rub them with Aspercream, which is the most devine ointment known to woman (or man). Long's Drugs has a generic brand that is very good too and a lot less expensive. So I baby my feet and try to keep them happy because if they aren't happy..., you know, the rest of me might have to go live in the city, in a ground level condo and use a walker and be....., OLD. Now, when I was 20 or 30 years old I though a person who was over , oh, maybe 50 years was really old. Well surprise, my young, little "peeps" ; you get to 50 or 60 and all of a sudden you acquire knowledge and wisdom and ..., fortitude that will last you another 20 or 30 years, if you're lucky. So, if you play your cards right; you retire, get goats (and some chickens), plant a garden and live each day as if it is the most wonderful time of your life. Then, you take your tired old feet, that have a penchant for being barefoot and dirty, and treat them to a " SPA " pedicure. That's what I did yesterday.
What a truly special treatment for your feet this is! I don't think I have had a pedicure since last year some time and before that...., I can't remember when. I consider this a full on luxury. The chair I sat in had a built in massage for my back and before this lovely, young woman painted my toes, she massaged my feet and lower legs. Now other people may spend their discretionary income on big vacations and expensive clothes but I'm here to say that , for the money, a spa pedicure is one of the best, most enjoyable pleasures you can give yourself. The Prospector may have to do my chores for a while. Wouldn't want the goats to think my toes were something to eat. Cover them up? Put socks and shoes on? Are you kidding? 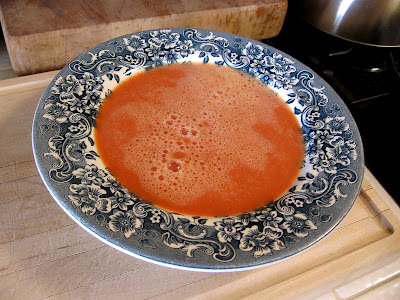 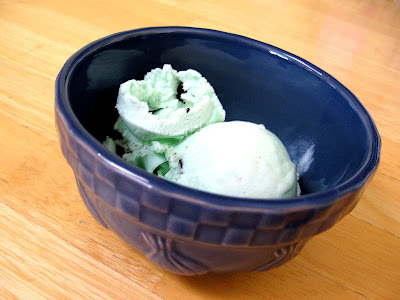 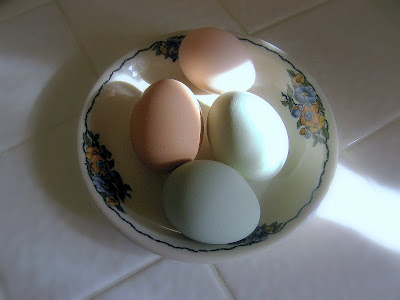 "All right, Mr DeMille, I'm ready for my close-up."

Caught on Camera- chickens running amuck in my Zen garden..., and the escape.

Woke up this morning still feeling a little run down from yesterdays efforts and disappoinments, but the goats needed feeding and the garden had to be watered before it got too hot.
By lunch it was way too hot to be outside. I still had to unpack the boxes of gourds and the table, etc, from the car, that I didn't want to look at last night. But, it was so hot and I needed to do something uplifting..., so I made brownies. I'm sure that for a lot of people this is a dangerous and indulgent thing to do, but do I really care what everyone thinks is indulgent after yesterday. Ha!!...No!!! It works for me.....,and , yes, I ate the piece that's missing in the third photo below. It was really good and I feel a lot better. Tonight there will be a bigger piece with ice cream on top.
Posted by farmlady at 2:02 PM No comments:

My answer to life's little disappointments 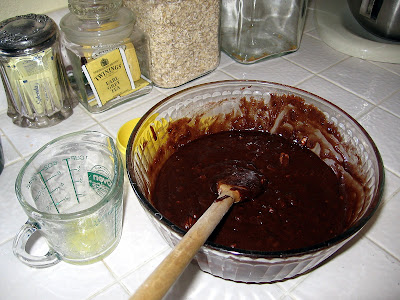 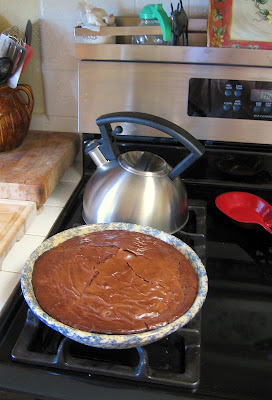 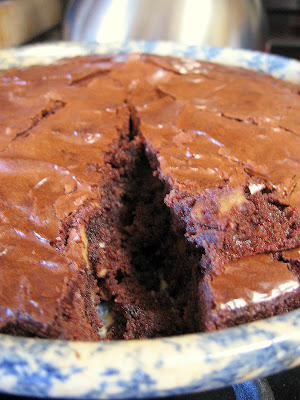