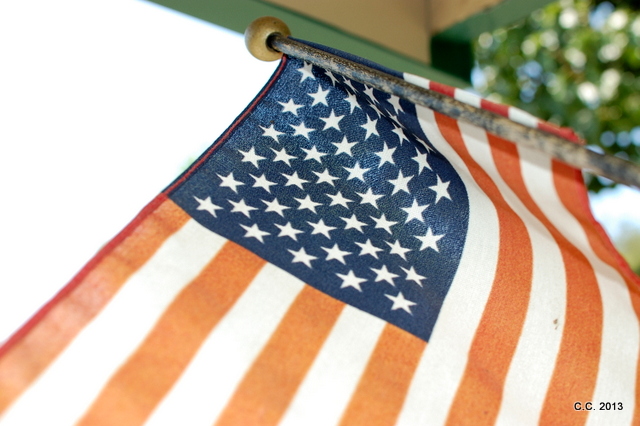 I hope that all of you are having fun , staying cool, eating good food and enjoying family.
Spent the week here by myself. The Prospector went on a fishing trip in British Columbia and has been gone all week. When he leaves for any length of time, this is when Murphy's law always seems to rear its ugly head. This morning it was in the form of a huge Rattlesnake.
We have a resident King snake that lives under the old goat house, but he has either gone on to better hunting grounds or been dispatched by a hawk or owl. Haven't seem the King in a while. He is obviously not taking care of business around here.
This morning, early, the dogs were barking at the back door. I thought they saw the cat. She likes to prance around where they can see her and then runs into the garage, just to annoy them.
I yelled something like, "Hey, stop barking at Annie." and they ignored me... kept barking and started doing their "something wild has entered the area" bark. Cutter gets a sort of hysterical edge to his bark and turns in circles. That he was doing.
I went to the back door and looked out toward the garage.
There it was, slithering across the concrete, the biggest Rattler I've seen in a long, long time.
This is when I went into overdrive. I called my neighbor and he said he would be there as fast as he could.
We always have a plan. The Prospector had already showed me where to grab the bucket and the "snake wrangler", a long tube with a rope inside of it that you pull to tighten.  The plan was for me to loop this around the snakes head and lift it into the bucket. But this was a BIG snake.
I took the wrangler, left the dogs in the house and went out through the front door and around to the front of the garage. I found a container... a big, empty, green plastic planter. It was deep enough, I thought, but now I wasn't sure I wanted to do this. When I looked down the sidewalk I could see the snakes head right at the corner of the garage. I hoped that it would stay right there until my neighbor came. It did.
"D" arrived, had his revolver with him and we went through the garage and came out a door that put us behind the snake. It was over before I knew what happen. The big snake was dead. 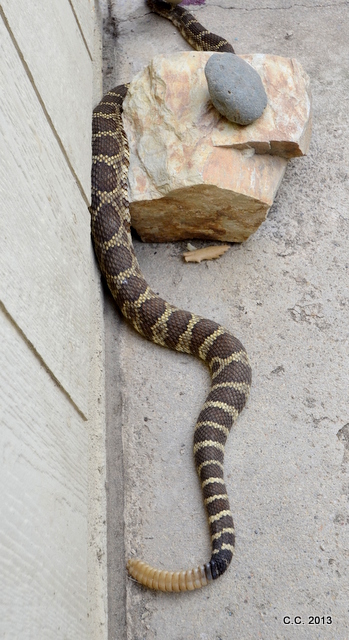 My neighbor is a very good shot.
This was an old Western Diamondback Rattlesnake and a beautiful specimen. 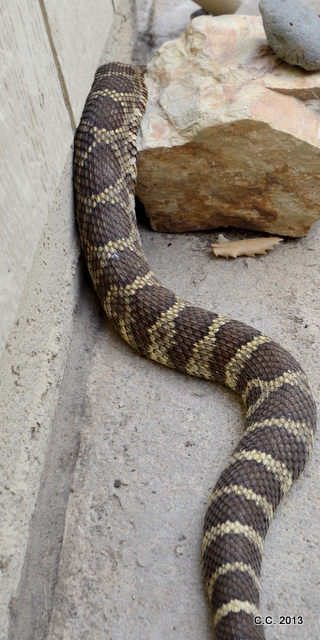 It was a venomous snake that chose to come into my yard. I can't tell you how this pains me, but I cannot have these rattlers near the house. If I were braver, I would scoop them up and take them to the river like I use to, but when they are this big, and as I get older, I cannot try to relocate them and I will not just scoot them away. We have had too many larger dogs bitten and I will not take the chance with my Corgis.

This one had 14 rattles.
The more a Rattlesnake sheds, the more segments are added to its rattle. When the Rattlesnake vibrates its tail, the segments click together to produce the buzzing rattle sound.

An unbroken rattle with a button at its tip

A broken rattle ending in a tiered nubbin
The tissue that makes up the rattle is like a thin brittle fingernail. Just as a human can tear a fingernail, when the rattle gets longer than about 8-10 segments, some may break off and be lost. If the string of rattle segments ends in a smooth rounded button, all the segments are there and the rattle is complete. If the rattle string ends in a squarish or tiered nubbin, the rattle has been broken and some segments have been lost.
You cannot tell a Rattlesnake's age by simply counting its rattles.

(The above information is from this site. Thanks to F. Wayne King for the illustrations.)


This seemed like an old rattler with a broken set of rattles.

The end of the rattle was rough and broken. 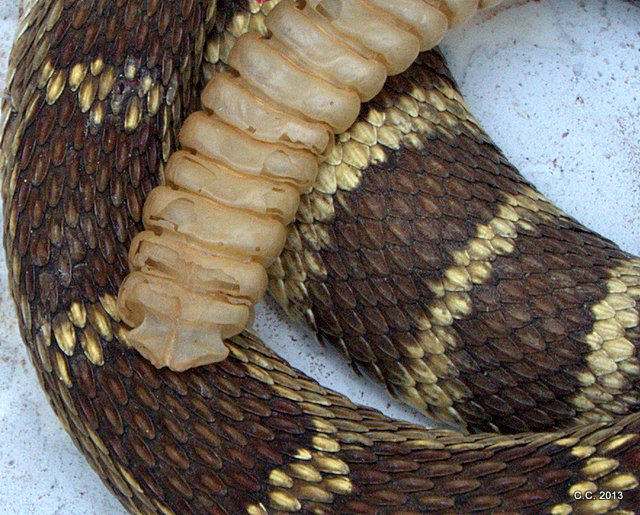 Its markings were really amazing. 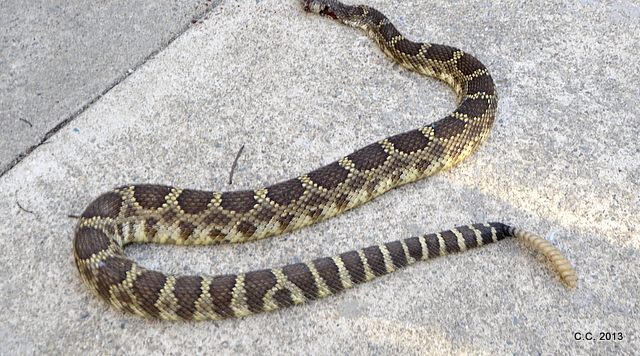 "D" took the snake with him. He will skin the snake and freeze the meat. This is a good thing. At least the snake will be of some value as food.
The weather is still very hot. I check the whole front yard, bushes and all the corners where a snake might be resting, before I let Carl and Cutter out. This is a labor of love.
They have their anti venom shots but they are little dogs and must be protected.
Annibel, our barn cat, takes her chances everyday. I always check the chicken boxes before I retrieve the eggs.
I continue to watch everywhere.

"Look before you leap, for snakes among sweet flowers do creep."~German proverb~
( and along garage walls, under wood piles and in unsuspecting corners.)

Have a Happy 4th of July.

Labels: feels about killing a venomous snake., info on rattlesnakes, Rattlesnakes on the forth of July

Wordless Wednesday: Seagull... on the edge. 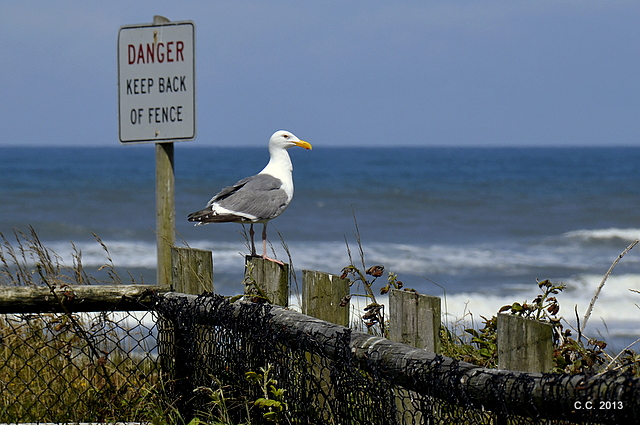 Well, not really... but I'm trying to find my sense of humor in all this summer heat.
My broody little bantie, Squeakie, wasn't happy with me yesterday morning because I took the only egg that was laid all day. The chickens are affected by the heat too. They just don't want to make the effort.
Squeakie was upset. She wanted to sit on an egg and I, the mean Farmlady, took it. 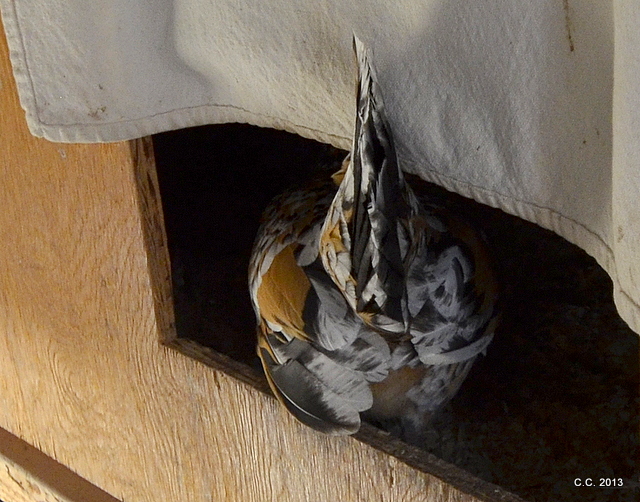 She went looking but... no eggs. She said something under her breath and left me holding the only chichen product of the day. I know she thought I was taking her child or something. She was not happy about this. Good grief! 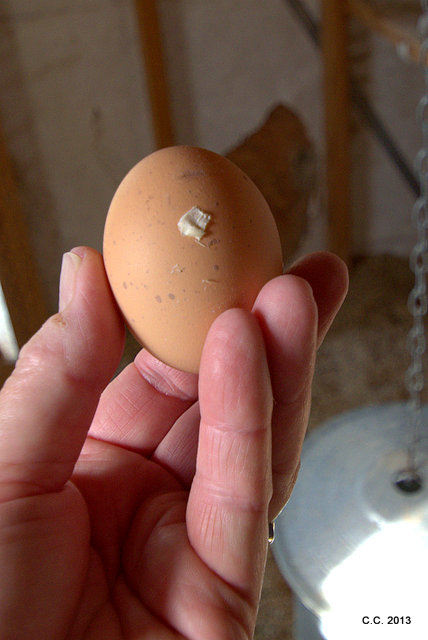 With sweat rolling down my face and seeing my sense of humor melting in the heat, I thought about an email I got from my friend in Michigan, recently. She wrote,
"I always heard the expression, "It's so hot you could fry an egg on the sidewalk" and I always wanted to try it.  I think you should find a spot in your yard with a bit of concrete or a flat rock and try it.  Photographic documentation would make a great blog post."
I thought...Well what else have I got to do in this heat.
So, here it is.
Documentation.

Yesterday afternoon at 1:28 p.m...
It was hotter than a fire cracker lit on both end. 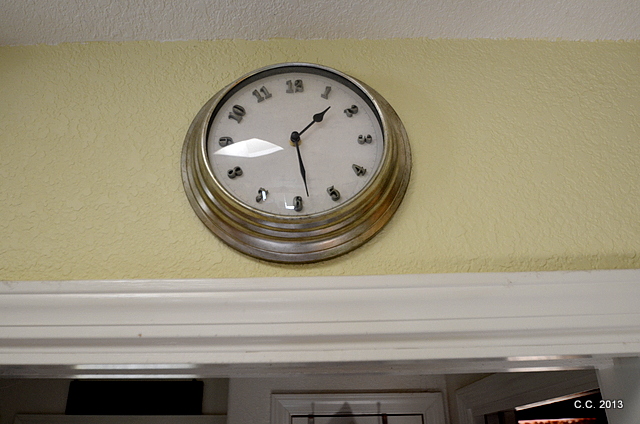 I took that one chicken egg of the day, 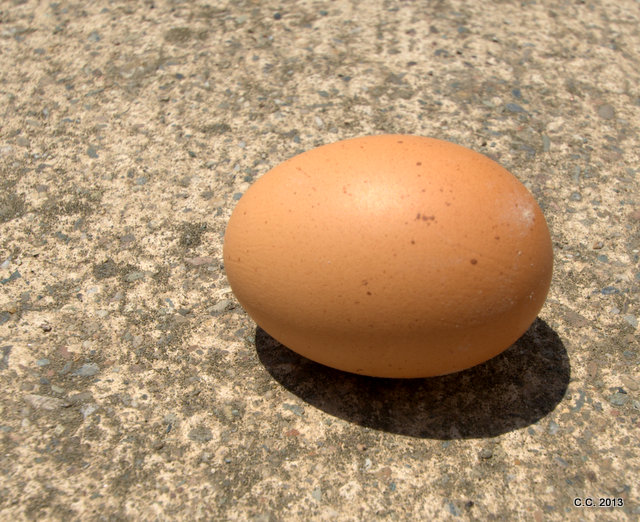 and cracked it open on the hot concrete between the garage and the house. 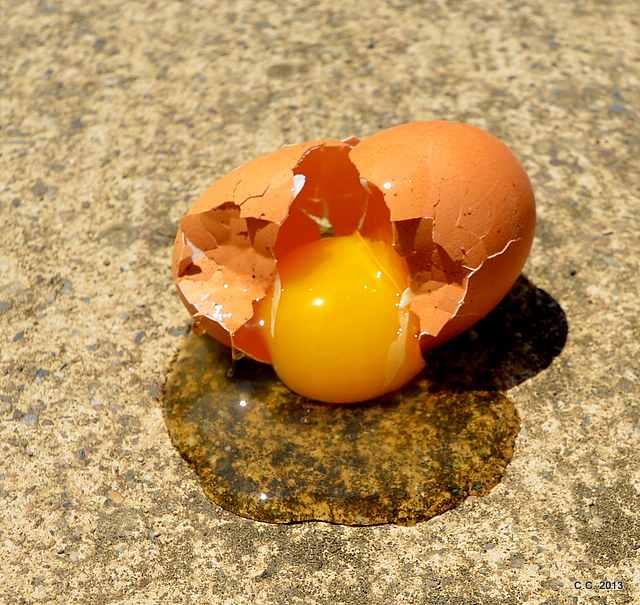 At first it just sat there going "Why, why?" Then it started to bubble. 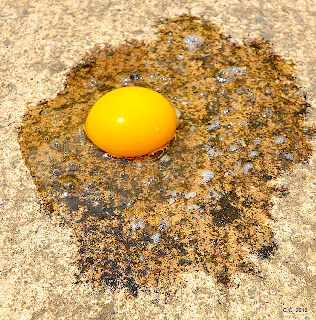 Within a half hour, it had more bubbles and was looking a little stiff. 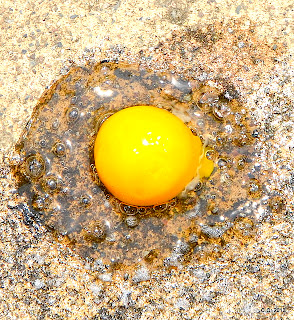 After a few hours, and getting tired of going outside to check, I drove down town to mail some bills and go to the store. When I returned at about 3:30, 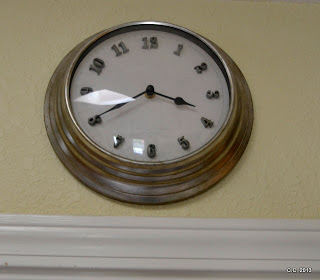 this was the condition of the egg. 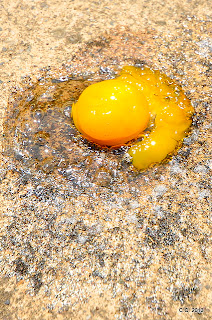 Obviously not a 3 minute egg with toast.
By then the temperature had risen to 107 degrees, in the porch shade, so I gave up. It seemed like this egg was never going to cook. As far as I was concerned, I had collected all the data I needed, Maybe this egg would have fried on a rock in Death Valley but it wasn't going to fry itself here, in my yard.

This morning the damn egg was done. 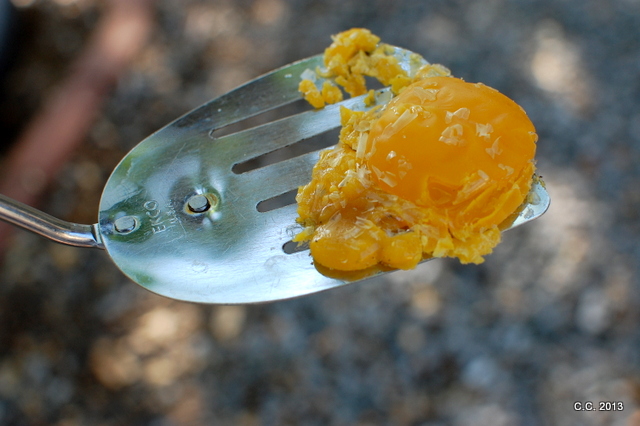 Hard and pretty much cooked. I forgot to use a non stick spray so I had to scrape it up with some particles of gravel and dog hair.
It took all night and most of yesterday, but here it is. 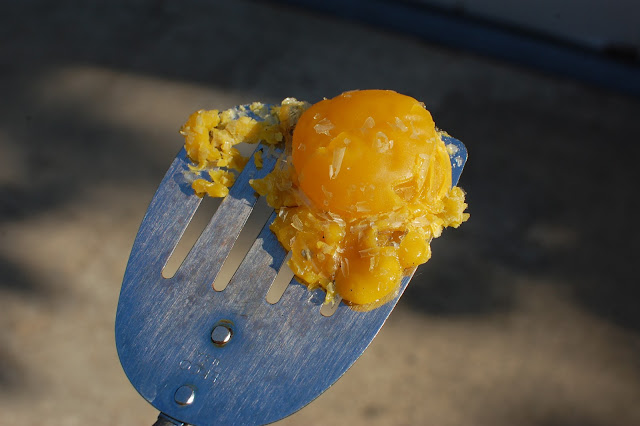 Would you like this with toast or an English muffin?
Bacon or sausage?
Has anyone else done this experiment? Let me know. We can write a thesis... together.

This morning I found this monkey in the refrigerator. 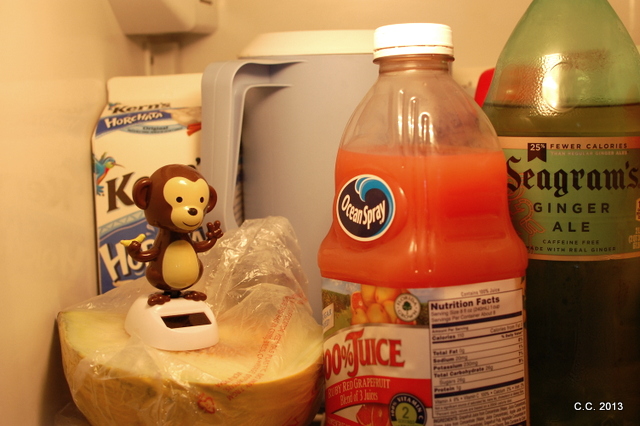 Do you think that Squeakie did it? I better leave her an egg today. She can be brutal when she gets her feathers in a wad.