A Riot of Reflection

This morning I drank coffee and started the second chapter of Small Wonders by Barbara Kingsolver. 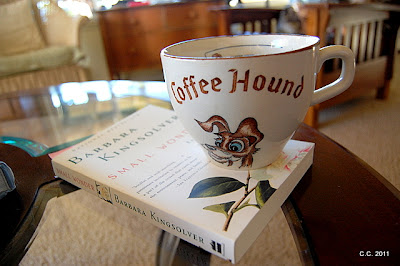 This chapter is called Saying Grace and contemplates the grandness of the Grand Canyon and our Fat Brother Mentality. It's worth the read. 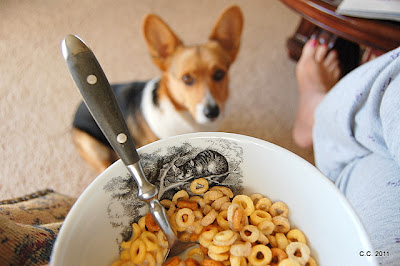 I've discovered why I like multi-grain Cheerios when I don't like cold cereal much at all. It's because it goes with my house and my dogs. If I throw in a few chocolate Cheerios ( Yes, there is such a thing.) then my cereal would match Cutter completely. I know this is a bit OCD but it's just the way I can be sometimes. Since I don't like chocolate for breakfast I will just go with the multi grained, multi colored little O's that taste good and the milk that matches my carpet. Life is about the little things. Like having the right pen to write with or the right toothbrush. We live in a society that allows us these idiosyncrasies.
Barbara Kingsolver would say "It is possible to move away from a vast, [unknown] by delving into it deeper and deeper. You can look at all the parts of a terrible thing until you see that they're assemblies of smaller parts, all of which you can name, and some of which you can heal or alter, and finally the terror that seemed unbearable becomes manageable."
The "smaller parts" that I divide my life into are how I manage not to become overwhelmed with the strangeness of the world out there. A world that I sometimes find scary and uncontrollable. It's in the act of seeing the cereal that blends with the dog, that blends with the carpet and  blending with the world around me that gives me a sense of stability and calm. I cannot feed the starving masses of the world but I can feed and take care of my family and the animals I choose to adopt. When I see the order of the smaller, I can, then ,(at the very least) look at the bigger more frightening picture. I'm able to create a space where my life is in control and then the media driven mass hysteria doesn't seem so... well, hysterical.
I can learn to move into the bigger world view by taking small steps that teach me to see clearly before I'm told that the world is slowly turning into climate changing warm water, protesting unrest and countries that wish to destroy us.
So I turn off the TV, contemplate my cereal and drink my coffee until something happens,
Some day I may not be talking about color coordinated cereal because there will be a bigger, scarier picture.
Life will play itself out .
There will be no end to the disasters that will befalls us. ( So say the MEDIA.)
But... there's good news.
There are only 32 days until Valentines Day and the stores are filled with LOVE.
There are 96 "la"s in the song "Deck the Halls".  and...
You can buy chocolate sardines at Bergdorf Goodmans ( six for $45.)
and there is a Prius for everyone... Even one that plugs in.
Really? Everyone?
"What a world. What a world."
Posted by farmlady at 8:55 PM 11 comments: 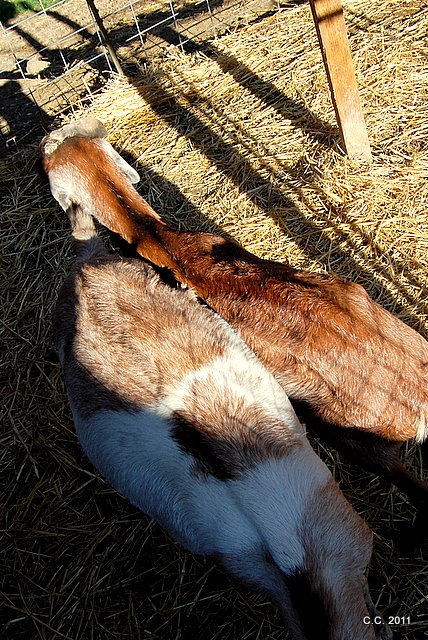 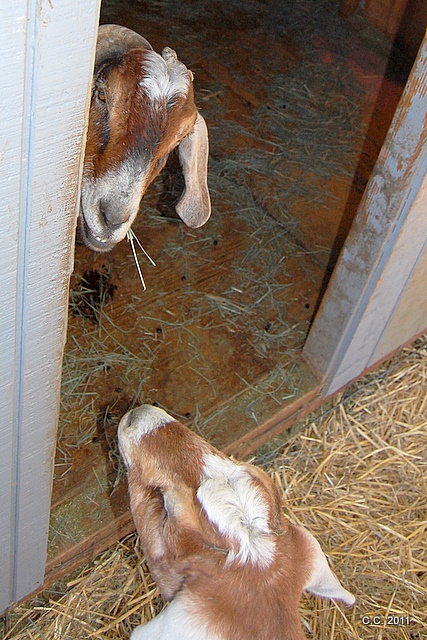 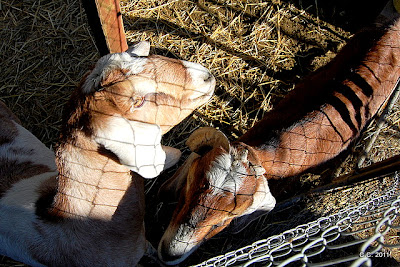 A win and a loss... but everything is Ok.

I found out that I won a giveaway from Linda Lanese's Felting Crafts blog and today it arrived in the mail.
This is the Robson and Ekarius book called THE FLEECE & FIBER SOURCEBOOK. 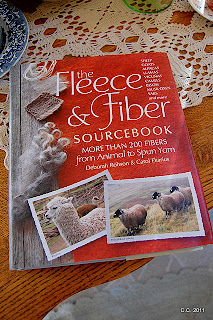 This is a beautiful book and I want to thank Linda for having the giveaway and sending me this book. 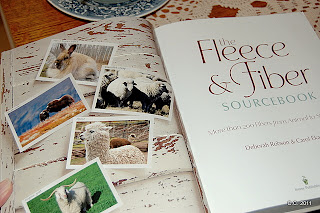 The book shows you over 200 animals and the fiber they produce. There is a section for sheep, goats, camelids (alpaca, llamas etc.) and other critters like dogs, bison and rabbits. It shows all the breeds and were they came from. This book is fascinating. There are stories about how these animals came to America and the history of each. The photos are lovely. 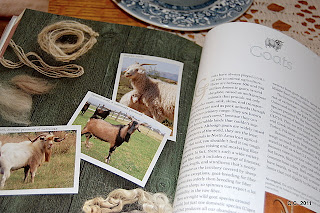 I feel very lucky to have won this book. Thanks again Linda.
Be sure to stop by and visit her blog. She has so many good ideas. Each post is filled with felting possibilities.

We can't win all the time but it's nice when we do. Today was  one of those days when you do something that you don't want to, but you know it's the only right thing to do.
As you know our goat, Brownie, has had a time of it. Last year he had an accident  and lost his horn. The stress of this, the resulting bout with Coxcidia and his weak condition were bad enough but the rejection from the other goats was worse. Especially from Bart, who would not leave Brownie alone.
A few weeks ago we found Brownie in a corner of the lower south fence. He was all twisted around with his head underneath his body and he couldn't get up. His horn was bleeding again and he was in a state of panic. The Prospector finally got him untangled and upright but Brownie was not doing well. He could hardly walk. We don't know exactly what happen but we suspect that the goats were playing  around and he got knocked over, again. He's so fragile. He usually walks away when they are playing but he probably got cornered this time. At any rate, he was down and couldn't get up.
We separated him from the other goats and the vet has been out here twice. He has a form of animal rickets that makes him very weak. We have been giving him grain with vitamin  A and D in it. We also gave him his first round of shots called Bose for white muscle disease. He's improving... slowly.
The area he is in won't be much protection when the rain comes (If it comes at all this year.) and he would have to have more shelter soon. We couldn't let him in with Bart and Freckles because they would butt him and probably knock him off of his feet again. The vet bills were rising and building another shelter was too expensive. So we had to make a hard decision.
We have given Bart and Freckles to a farmer in Calaveras County. He came and picked them up this afternoon. Now, it will just be Brownie and Murphy here together. Murphy has always been good with Brownie. He's kind of protective about Brownie.
We also didn't have a big enough area for these four goats to graze in. A bigger area would have meant more fencing which we couldn't afford, so we have been feeding them with expensive grass hay to supplement their diet.
Now there will only be two goats and Brownie is happily back in the goat house tonight with Murph'. I will miss Bart and Fleckles but I know that this was the best thing to do. They are fine and the woman told me that she has some of Bart's relatives at her farm. We all got these goats from the same breeder.
Now we can take care of Brownie and not worry about him being hurt again. Murphy will still be my magical goat. He will work his magic on Brownie and maybe Brownie will recover completely.
I feel a little sad, tonight,  but I know it will be OK. .
Posted by farmlady at 5:07 PM 20 comments: