Laughton Ranch... sanctuary for animals during the Butte fire

Yesterday I pulled into the Raley's parking lot, in Jackson, to do something that I had been wanting to do for a few days. I heard that the Laughton Ranch was taking donations for the rescued and relocated animals from the Butte Fire. I wanted to donate some money, but I also wanted to see what and how they were doing all of this... and, of course, take some pictures.
The activity level in the parking lot and the street across from The Ranch was at its peak. 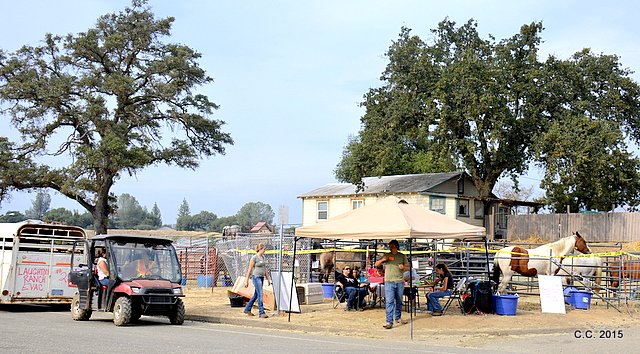 The transport vehicles were lining the road. 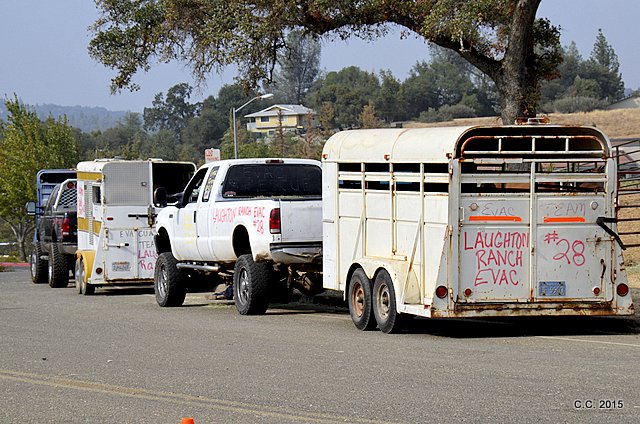 The Raley's parking lot was filled with more evacuation trucks and trailers, waiting to help those in need.

I parked, grabbed my camera and walked across the street to see where they were taking donations and to get some one's permission to take some photos. Everyone that I talked to was so nice. They finally directed me to Bobbi Laughton. She and her husband own the ranch. She asked me a few questions, had me sign my name on a list of visitors and stuck a name tag on me. I told her I wasn't representing anyone... that I had a blog and Facebook... and I wanted to get the story out there because they were doing such a good job. She  said she would get someone to give me a tour around the farm. I was delighted. I felt like an official reporter for a newspaper or something. I always ask before I take any pictures. Sometimes folks get touchy about someone walking in and clicking away without permission. It's always wise to ask permission.
I was introduced to a woman from El Dorado county who was helping with the animals. She was my tour guide. I have to apologize to her right now, because in a serious senior moment I have forgotten her name and she was so nice to me. I should have written her name down as soon as I got back to the car. It was only a three letter name. she had a name tag too. Sometimes I feel so old and addled.

She took me past the horses first. They were out in front near the street. 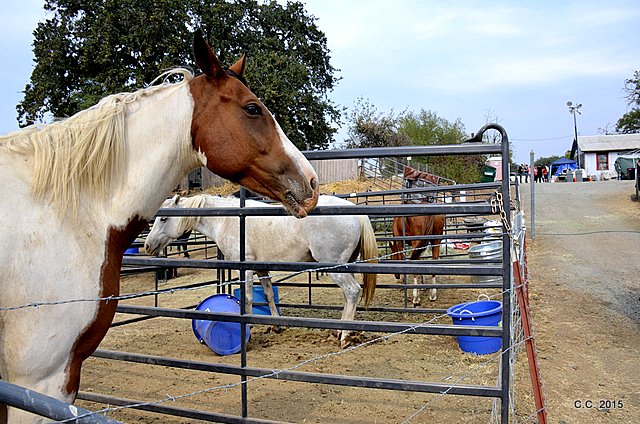 The stalls were clean and there was water and food for each horse. This one, in the foreground, was so beautiful and paid attention to our every move. I was told that all of the temporary fencing was donated by Lowe's in Jackson.
This was a sign in one area near the horses. 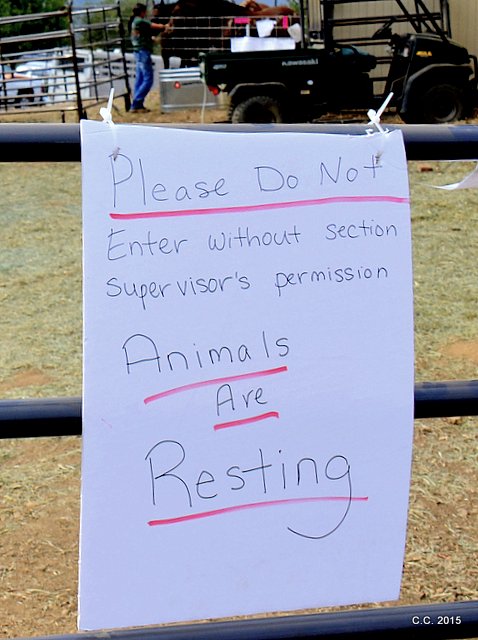 The animals were, and are, the priority here. The are stressed enough being in a strange place. It's so important to keep the level of human activity to a minimum so that the animals don't become anxious or sick.

When I walked up to the barn area I saw the hay, alfalfa and straw piled high and my tour guide told me that they go though huge amounts daily. 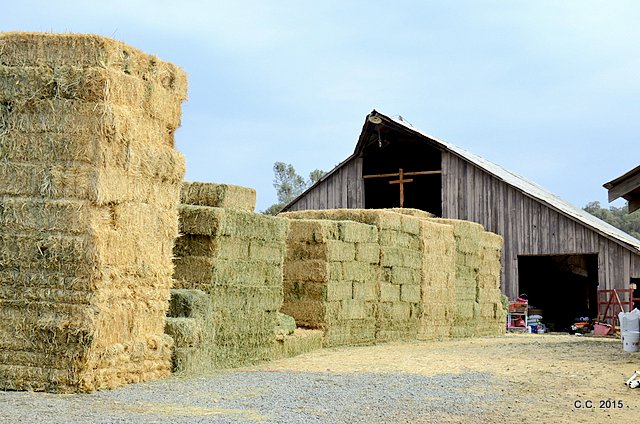 This is an unbelievable amount, stacked and ready for use. 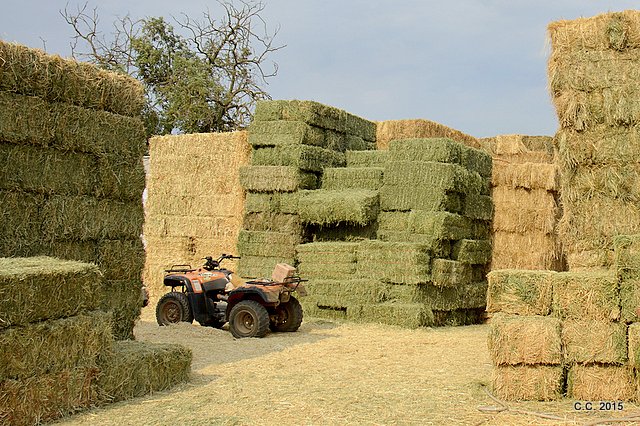 I felt that this cross on top of the barn was appropriate for the effort that was being made. It seems like it represented the good and caring work that was going on at this ranch. 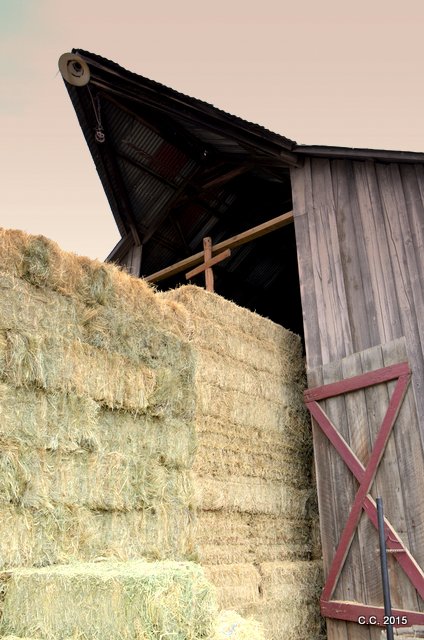 There were rows and rows of animal shelters. The animals were grouped together by the families that brought them here. Some pens had three different kinds of animals in them... all from the same family farm. 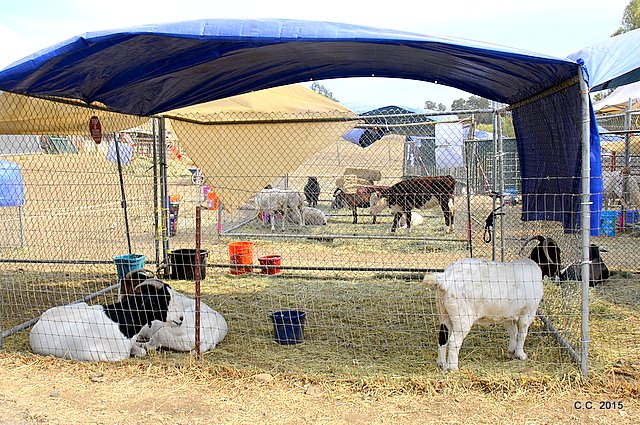 Each one protected and covered with pop ups and tarps... each being cleaned and watered by volunteers and family members. 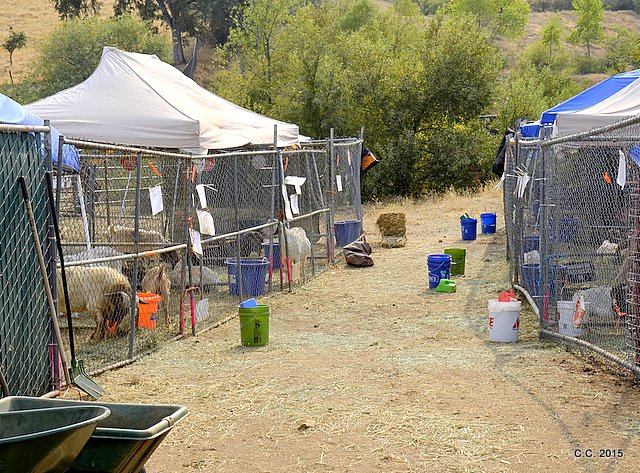 Lots of 4H kids helping too. They said that they could use more of these 4H er's. They know how to handle animals and the animals respond to the kids well. 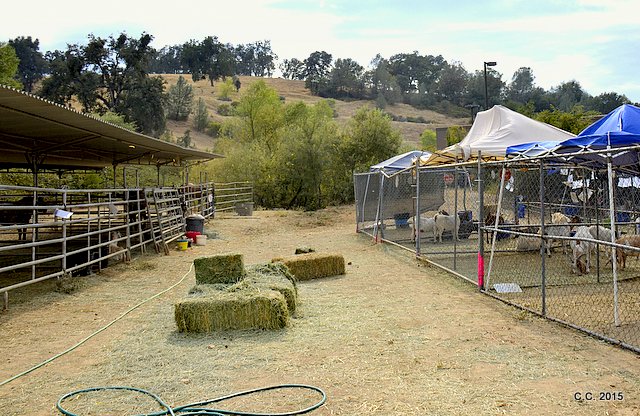 Hello guys, how are you? 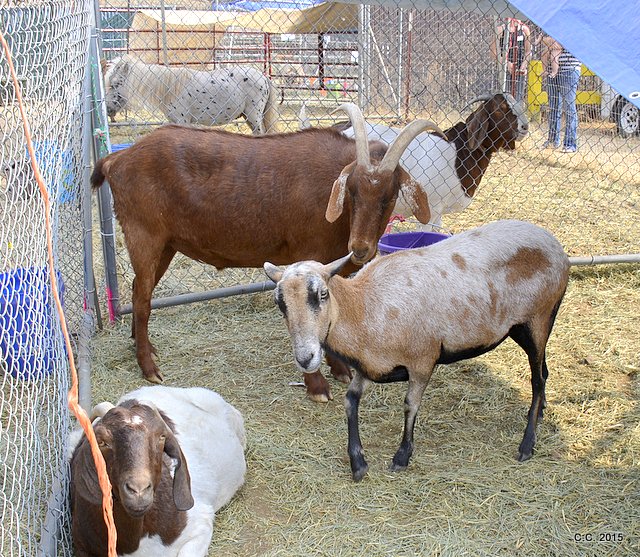 "We're doing well, Farmlady. How are you?"
I asked, "Are you being well taken care of?"
"Yes." they answered, "We are fine. Our owners brought us to a good place."

I loved the horns on this one. Reminded me of my Brownie. This is the way his horns should have been. Beautiful animals. 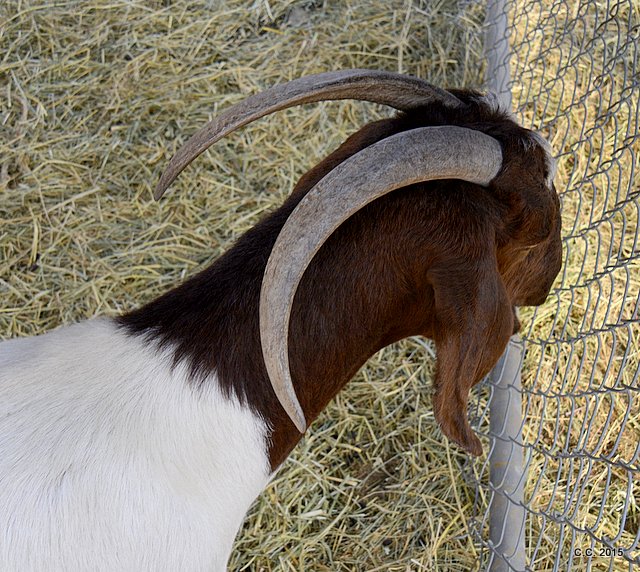 There was so much food. 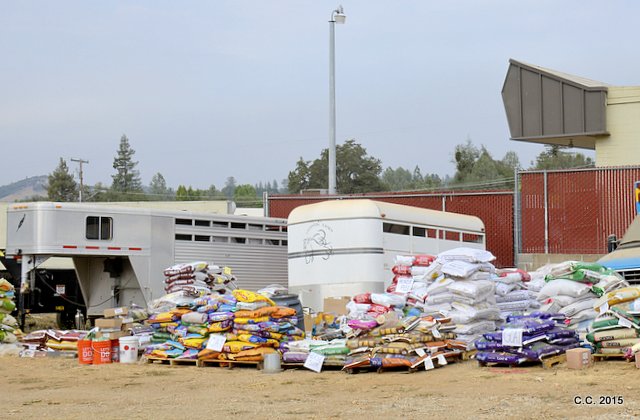 People and businesses are being so generous.

All the animals looked fairly content...except for this little horse. He didn't look happy. He looked annoyed. 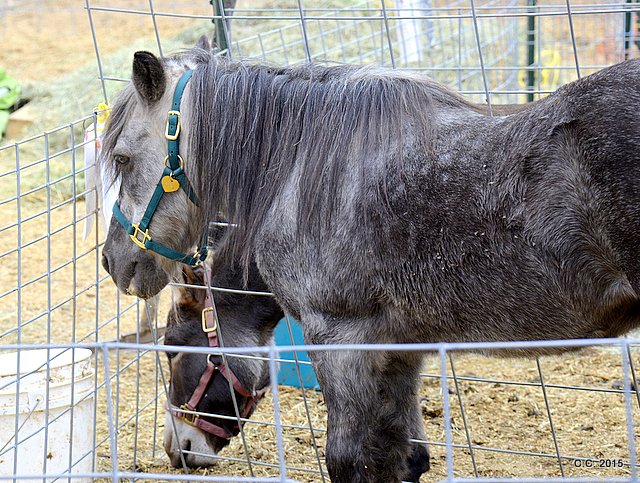 There were lots of chickens, roosters and a beautiful goose... 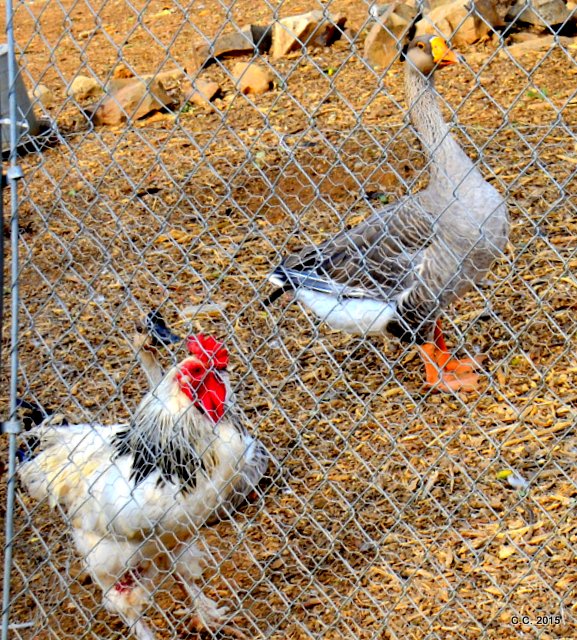 and rabbits... lots and lots of rabbits. 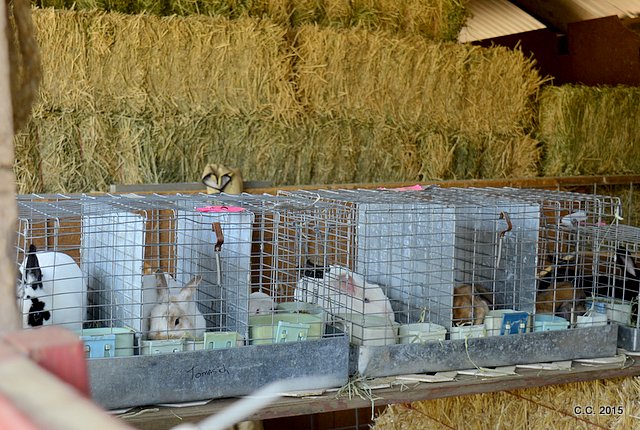 As I left, I noticed the front yard of the Laughton's house was filled with containers of cats. There were a couple of dogs, but most dogs were at other facilities. There was a pig the size of a house.
It is Noah's Ark in Jackson, California... only a lot more than two of everything.
All the animals are waiting patiently to go home. All being taken good care of by all these wonderful people.
I thanked my escort and we shook hands. I walked away with a really good feeling about my town and the people who live here.
This morning the Laughton's posted a video on Facebook. It was so upbeat and had such a positive message. They said that they are in this for the long haul. I believe they are.

Labels: Amador and Calavaras Co., Taking care of animals during a wildfire, The Butte fire in California, the Laughton Ranch in Jackson CA. Animals

A week of fear and smoke

We are a few miles from where the Butte fire, in California, started. We live on the south side of Jackson, near the river. If not for a wind blowing east through the Mokelumne River Canyon last Wednesday, I'm sure that we would be looking for burnt pieces of our life in the ashes of our home this week. We were too close for this to have ended any other way. The direction of the wind is the only thing that saved us. Many have not been so fortunate.
We held our breath for two days and finally knew that the fire was moving east, north and south, but not west. On Friday the electricity stayed on long enough to restart the freezer and refrigerator, turn on the air conditioning (temps were at 105 outside), take a shower... and to have a short meltdown of my own. A clean body, hair that doesn't smell like smoke and a good cry did wonders for the stress level. By Saturday, the fire was tearing through the central part of Calavaras County and the small towns that spot the area up there. It raced south and headed for San Andreas and Angels Camp, Murphy's and everything in between. It was also burning toward Pine Grove in Amador Co. The weather was over 100 degrees for days with no humidity. The drought was a huge contributing factor... So much fuel for this monster.
This is the Prospector's second day of helping the Amador Country Animal Response Team (ACART) at the Amador County fairgrounds in Plymouth. He is working most of the day there and was so tired last night... but I heard no complaints from him. Bless his heart. He is taking care of all kinds of dogs, from Pit Bulls to Chihuahuas and guess which one bit him.... the little Chihuahua. Not badly. More from fright. These animals are so stressed... but safe. They just don't understand what has happen to their homes. Carl and Cutter would be the same way.
Yesterday, after a quick trip to the hospital in the valley, I stopped at the Laughton Ranch here in Jackson to give a donation and ask if I could take some pictures. The next blog post will be about my experience at the Laughton Ranch and the wonderful rescue work that is being done there.
Posted by farmlady at 1:53 PM 14 comments: