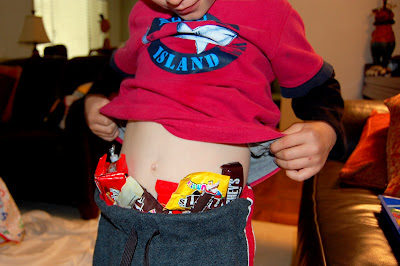 The Day after Halloween...., Four year old logic. This is what The Bean did so his little brother wouldn't accidentally get any of his candy.

Have a good Veterans Day. Rest up and say a prayer for all the folks who have defended this country. 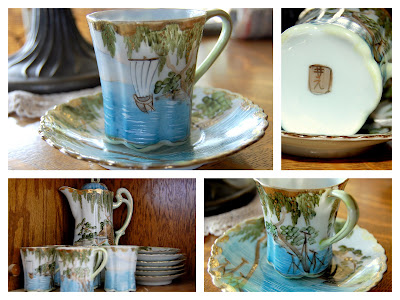 It's Past Due Tuesday and I have something to show you that is so beautiful. This was my Grandmother's Chocolate Set. I have researched this all morning and I found a lot of information that was mixed into a confusion of Japanese/Nippon/Chinese multi designed and shaped sets from many different decades of porcelain china that was imported here and sold. The only consistency was the shape of the teapot. I found 3 or 4 sets that were totally different in the design of the hand painting, but the shape of the pot was identical in all of them. The biggest mystery of this set is the mark. I found all kinds of information on marks and went through pages of different kinds of marks that identify these varied pieces of porcelain. I never found the mark that is on the bottom of all the pieces in this set. 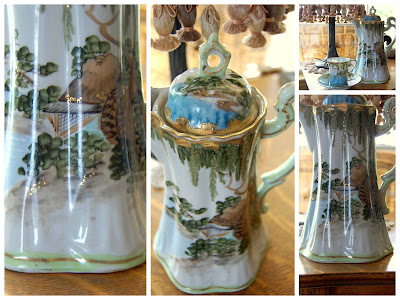 This is a Japanese porcelain, hand painted set with a water, sailboat and nature design. This is a complete set (minus one cup) and all the pieces have a matching pattern along the saucer and cup edges and also on the chocolate pot and lid. The border is hand decorated with a gold leaf scrolling design. The lid has a cutout with a small piece that is missing. All the descriptions say that the cutout is for stirring the cocoa and that this distinguishing feature differentiates it from a coffee or tea pot. Without the cutout it's not a cocoa pot. The lid has a "cartouche" handle and the pot has a fancy applied handle. The cups have applied elongated loop handles. The saucers are scallop edged, 4 3/4" diameter and the delicate cups are ribbed with tapered cylindrical, scalloped edges at top and bottom, 3" tall. The set consists of the tall chocolate pot, 5 cups and 6 saucers.

I wonder if my grandma used this set when she had company or, like myself, kept it in a glass case somewhere and didn't use it because she was afraid it would be broken. I would love to know how she got it and if it's worth a lot of money. Until I find out more information about the set I will just dust it once in a while and admire it's beauty. Maybe I will set it out on my new/old buffet when I move the buffet into the living room. What do you think?

Don't forget to visit Roomies With A Past for other vintage or antique things that have found a venue for showing their beauty and uniqueness. Join us....

Ninja Mantis of the Rose Garden 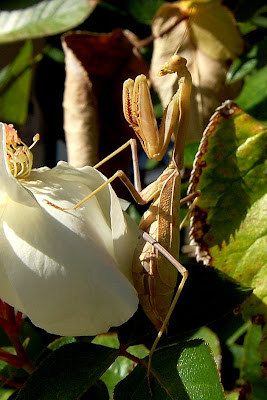 I was out watering the garden, yesterday, and I'm usually very careful about where I aim the hose, but I didn't see any little creatures on my white bush rose. No honeybees, bumblebees or spiders were anywhere in sight. The sun was shinning warmly across the front porch and I was thinking that I needed to prune some of the spent roses because they were looking rather sad. As I watered, my mind was planning things like where the Narcissus and Daffodil bulbs should be planted sometime this month, what plants I should just pull out because they struggle so much every summer and when I would have time to sand and refinish the porch that desperately needs some stain on it. So many things need to be done before winter sets in. November is a good month here, for projects. The rains will, hopefully, come but before they do, I have many gardening things that have to be done. 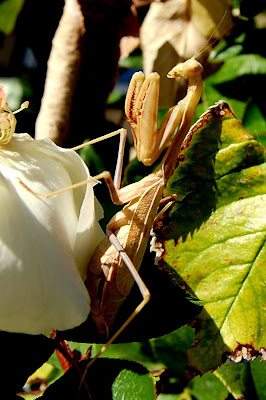 So , as I'm filling my head with all of these ideas and thoughts, I didn't pay attention to the hose and where I was watering. All of a sudden this huge Mantis comes charging up out of the white rose in attack mode. She plants herself on one of the white roses that needed to be deadheaded and then , with her beadie eyes on me, she lifts her front legs up and takes on the stance of a monster in one of those Japanese horror movies.
I don't think I got her wet. I was only watering the ground around the rose..., but she came up out of that Rose plant like I had called her to battle. She positioned herself in front of me like she planned to do me great bodily harm and if she hadn't been all of two or three inches tall ..., if she had been huge like in the movies, I would have grabbed the dogs and run to the house, locking the door and calling the sheriff. This is the Corgi dog of the insect world....,a tiny Ninja disguised in pale green, looking like a dried leaf. This little Ninja was not praying for guidance, she was ready to take me on.
I had to laugh, but at the same time, have respect for this creature as I watched her defend her place in this world she lives in. Brave, rather scary (even with her small stature) and showing the world that she is the biggest, baddest insect in the garden. I laughed, but I removed the hose, said I was sorry and went for my camera. She allowed me a few snapshots and , being the little alien that she is, she moved her head and front feet around menacingly just to let me know that she was being patience with me and at some point I needed to leave her to do her work in the rose garden. I did.

How fascinating.
This creature will always be welcome in my garden, as all the insects are. Maybe she has a nest down inside the rose. I will be much more careful from now on. 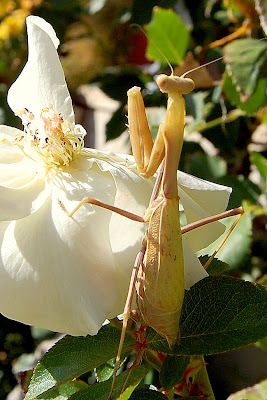 Stagmomantis Californica - California Praying Mantis
Family - Mantidae
Order - Dictyoptera
Length - 4.5 to 5 cm.
Recognition - Typically green or light brown or yellow
Habitat - Common on bushes and low vegetation
Behavior - Predator
Residency - Southern United States
Note - The California Mantis is cannibalistic. During courtship, the female may decapitate the male for unknown reasons. This, however, does not prevent the male from continuing the mating process. (That's a guy for ya!)

This information on the California Praying Mantis was found at:
The Free Information Society. site