Trials for the Prospector's Mom 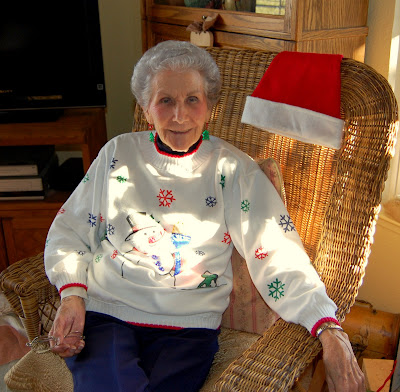 This is my Mother-in-law. She is 89 years old. This photo was taken two Christmas's ago when she was still showing the world how to grow old gracefully. Her name is Violetta.
Last week she fell in her living room and broke her shoulder and her hip. She had surgery to repair her hip. This is a very serious operation for a lady her age. Her shoulder will heal by itself because the breaks are hairline fractures and can't be set.
This has been a very difficult time for her and for her children, but I believe that she will recover because she has the determination of a draft horse in a snow storm and has never let anything get her down.
Please wish her well and send good thoughts her way. She has always been so good to me and I love her a lot. 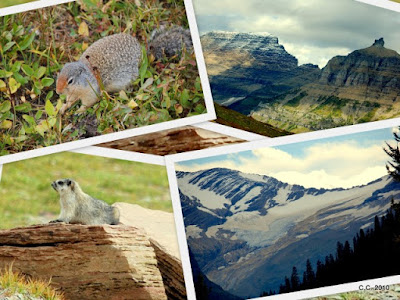 I didn't finish the last part of my trip. I'm still dreaming of Montana. It's a place of dreams that has been inside of me for a long time. It speaks of wide spaces, freedom and Legends of the Fall (my favorite movie of all times).... and being in country that is bigger than myself.
We said goodbye to the the small creatures of Logan's Pass. the peaks of the Continental Divide and Grinnell Glacier. Coming down the east side of Glacier is different. It's stark, with it's rivers running east; which seems odd for someone who has always lived on the west side of any big mountain range. There was a fire a few years ago which gives the area an almost ghostly appearance. St. Mary's Lake is beautiful and then the land starts to stretch out. The distances become further and the roads longer.
We drove up to Babb and back into the park along the Swiftcurrent Creek (against the current). It was getting late and we were tired. We parked at the Many Glacier Hotel. This was were we had chosen to stay the night. It was so beautiful.
This is where I want to take a moment to tell you that my "friend "D" and I consider ourselves highly intelligent and capable women. As I said before, we decided not to make reservations because we believed that it wouldn't be necessary. The weather, the time of the year, lack of people in the park.... it seems like a reasonable decision. At dinnertime, with a storm moving in from the west and fatigue settling in faster than the storm, we realized that we MIGHT HAVE MADE A MISTAKE. The Many Glacier Hotel didn't have a room available. None. So we drove back out to Babb and back down to St Mary. NO ROOMS ANYWHERE. Someone at the St Mary Hotel said that there might be a room at some "motel" on the way to Browning. Since we didn't have any other choices we drove toward Browning. When we saw the "motel" we drove right on past it and kept going. We preferred a motel that had lights on and looked like someone owned the place. So we drove on into Browning.
Let me tell you a little bit about Browning. It's halfway to Cut Bank in the middle of the Blackfeet Indian Reservation. It may have all the conveniences that are needed on the eastern side of the Rocky Mountains and is home to the Museum of the Plains Indians but when you pull into town on a rainy, cold weeknight.... hungry and wiped out tired, you fail to see the beauty of a place.
We finally found the WARBONNET MOTEL on Highway 464( recommended by a lady on the cell phone that had recommended the motel on Cut Bank Creek that looked like we might not wake up alive in the morning. The one we drove right on by a few miles back.) and parked in front of a sign that said "OFFICE", next to four other cars. OK.... this is where you really have to put your "big girl panties" on and bite the bullet. We considered sleeping in the truck but what the heck.... we were there and we were tired. We walked into a small "office" surrounded by a big room filled with paintings and a hall way with more paintings. The counter loomed ahead. The place smelled like smoke. It was to say the least.... dreary.
We rang the bell and a man came out of a room behind the desk. We told him we needed a room. Why else would we be there this late at night? We smiled.
He was very nice and said he had a room. Good! Finally, there was a room available. It was only $89. I envisioned what this $89. room would look like and then said to myself....."Don't think. Stop. Take the key. Go back out to the car. Get your bag. Don't think."
We grabbed some things and walked through a glass door that was shattered.... into a hall way that, again, smelled like smoke. Turning left we found our door number. At one end of the hallway a very small dog was barking, ferociously, at us. At the other end a beautiful girl was sitting on the floor with her door open, listening to her itunes. She waved at us.
We opened the door to our room. Now.... you know what we were expecting. What a relief it was to find a clean room with a really nice, clean modern bathroom, comfortable beds, a TV, toilet paper, little wrapped soaps and a Gideon's bible. We almost knelt down and prayed together. Would have been a first since we were kids.
Someone tried to open our door and then said they were sorry. We hoped it was a guest. That's when "D" went back out to the car and got her revolver. Then we propped a chair under the door knob and went to bed. Sometimes you just have to have faith that everything will be OK..... but just to be safe "D" slept with her gun under her pillow and I slept with my wallet inside my pajama top. It was a little uncomfortable but very reassuring. I had strange dreams which I won't go into. Don't remember much else. We left early the next morning and drove to East Glacier where we ate a huge breakfast and then drove back to Columbia Falls along the Middle Fork of the Flathead River. Beautiful country.
When "D" husband found out that we had stayed overnight in Browning he almost had a heart attack. I heard him on the other end of the cell phone. Yep! He was upset. But, you know what? I saved at least $200. on the room we would have gotten in Many Glacier. and we learned a valuable lesson about making reservations no matter what time of the year it was. 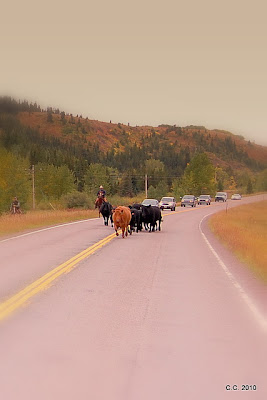 On our drive back around the park on highway 2,we had to stop for some perilous situations that kind of tied up traffic... 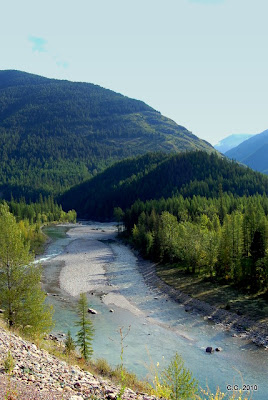 and to take pictures of amazingly beautiful scenery....
But nothing will ever seem as much an adventure as driving into Browning, Montana on a cold and stormy night.... and living to tell about it.
Posted by farmlady at 12:06 PM 9 comments: 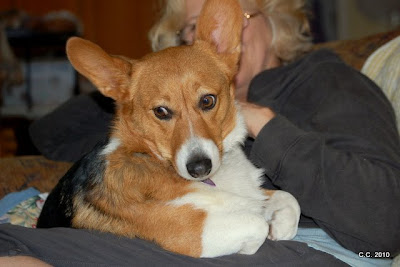 Sometimes we aren't sure what is going to happen and we have insecure moments of doubt... so we find a good lap, tuck our paws under and hope for the best.


It's always good if someone finds the right place to scratch.
It can make all the difference in our day when someone bothers to stop and give us some one on one. 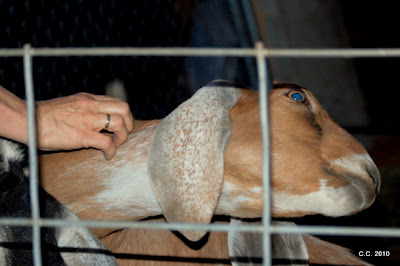 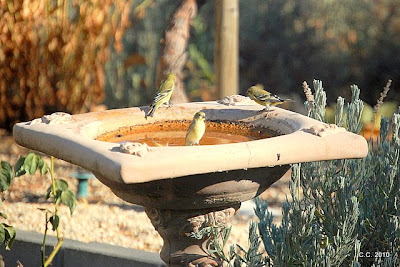 Then we feel the sun and forget the rain....and even though we know that there will always be something waiting to pounce on us....

We will look on it with compassion and without malice because it is what it is... and life needs to be accepted with all it's hidden chaos. It is our life and
we are here.

"The great sea has set me in motion,
set me adrift,
moving me like a weed in a river.

The sky and the strong wind
have moved the spirit inside me
till I am carried away
trembling with joy."
\
Uvavnuk (mid-19th-early 20th century)
Posted by farmlady at 9:23 AM 8 comments: