We had planned for this day. My friend "MJ", from Wallace, came to pick me up early this morning.
We drove over the Mokelumne River and south toward the farm were we picked berries last year, just after a terrible fire that almost destroyed these poor folks house and everything they owned. This was the post that I wrote on the day of that fire. This is the post that I wrote when we went to pick berries and about the ranch where these folks live.
When the fire burned, that day, we watched from our house on the north side of the river and prayed that it wouldn't jump the river, or that we would never have a fire like that. Ironically, not three weeks later we had a horrible fire of our own that almost burned our house down. Both this couple and ourselves were saved by the quick work of the fireman, the bombers, the helicopters dropping river water on us and the defensible space around our houses.
So this year, we were invited to come and pick berries again. We brought another friend named Heather, from the gourd club, and we arrived at the farm. The woman told us we could pick as long as we wanted to.
The whole area looked so different from a year ago. The burned area is covered with grass now, dry though it is in the summer. Quite a lot of the trees in the fire zone survived. 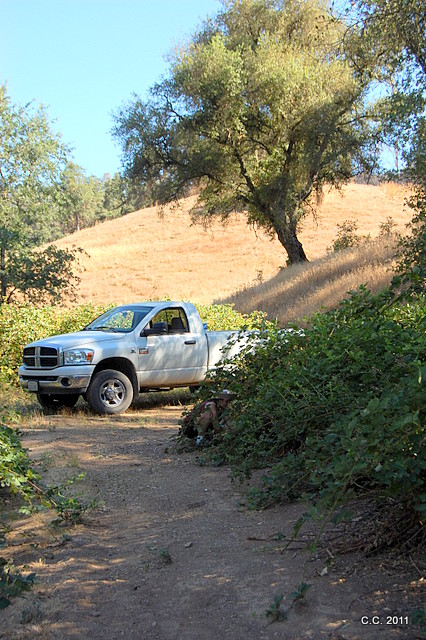 We drove into the same shaded area that we went to last year and parked. The blackberries were abundant. 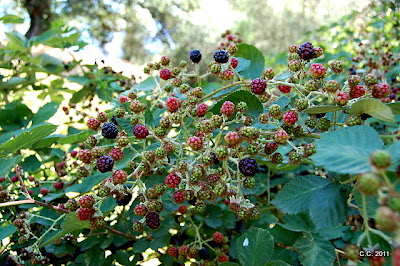 Lots of ripe ones. 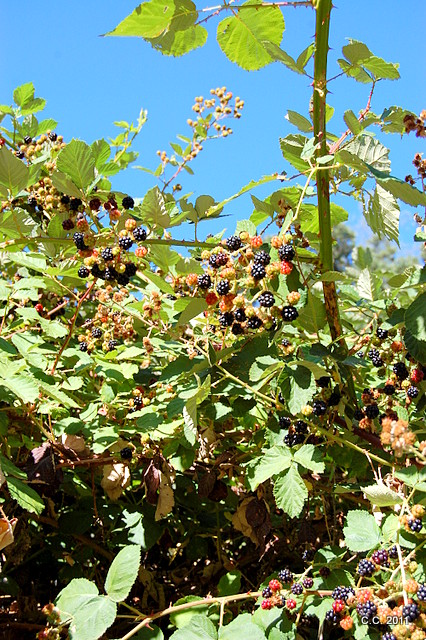 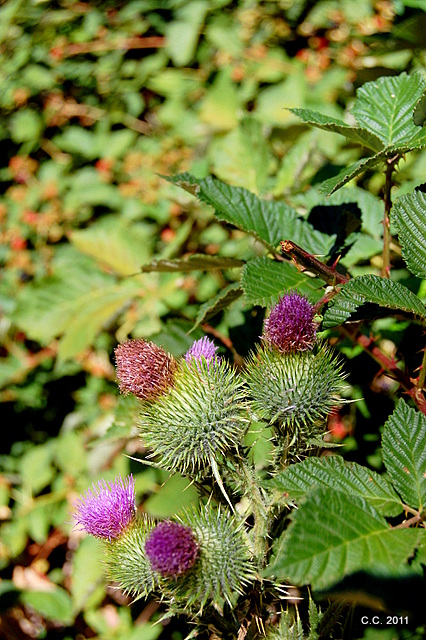 As if the berry stickers weren't enough, we also had to contend with these thistles. They were very pretty, but one more thing to avoid in our quest for the beautiful black berry. We watched for snakes and any other creature that call this place theirs.
We picked all morning. It was a hot day and labor intensive. Luckily, there were big trees that shaded some of the area.
This beautiful Valley Oak was so huge. It must have been very old. 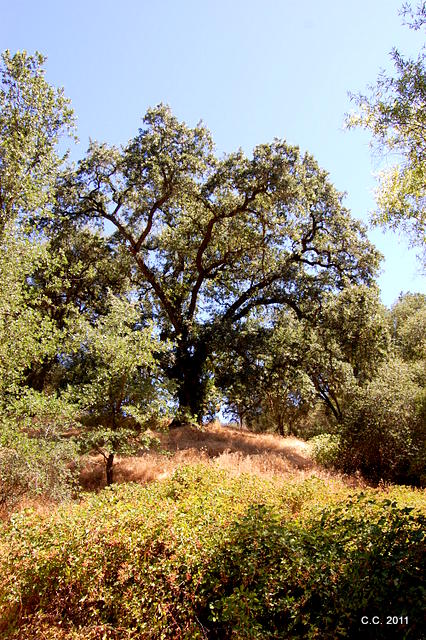 It wasn't really shading us, but its presence was like a guardian looking down on us.
We picked berries as the morning got warmer and warmer.
Heather brought these great plastic containers that she had attached string to so we could carry them around our neck, which freed up both hands for picking faster. 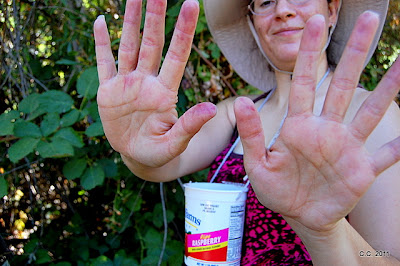 This is such a good idea. 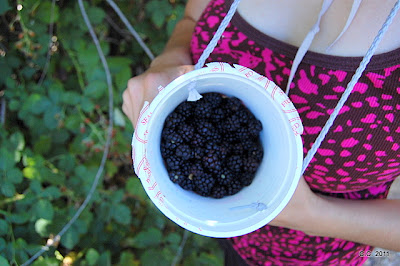 Fill up the small container and empty it into a bigger one. 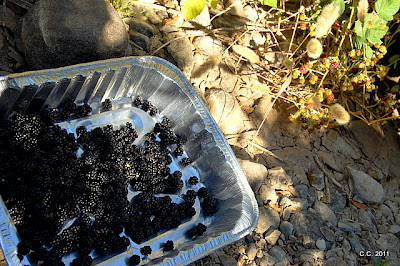 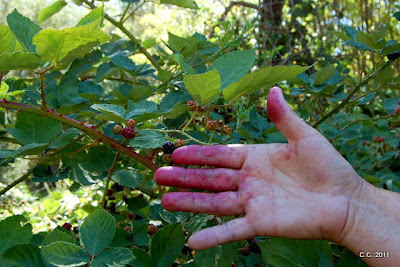 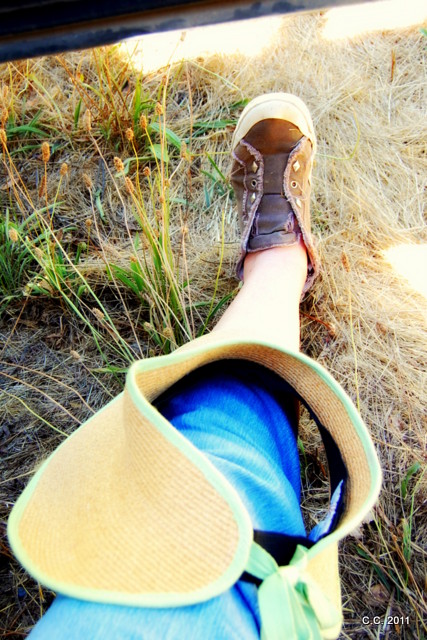 And then we would go pick more berries... until the heat and the bugs and the tiredness hit.Then we called it quits. 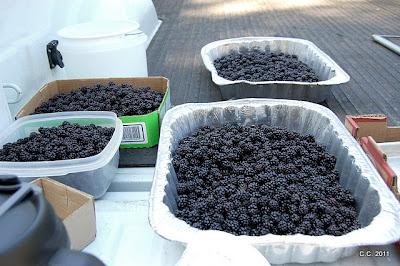 This was part of what we picked.
I think that Heather had done this before... she was very organized. 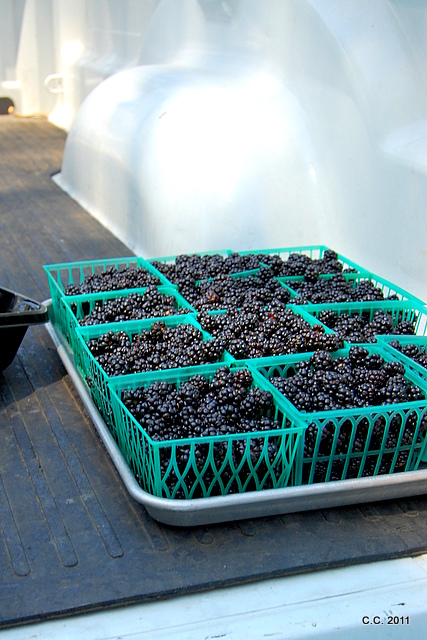 Will you look at this. She could have sold them right off the back of the truck. She was really into this berry picking. We had to pull her out of the bushes and make her stop. 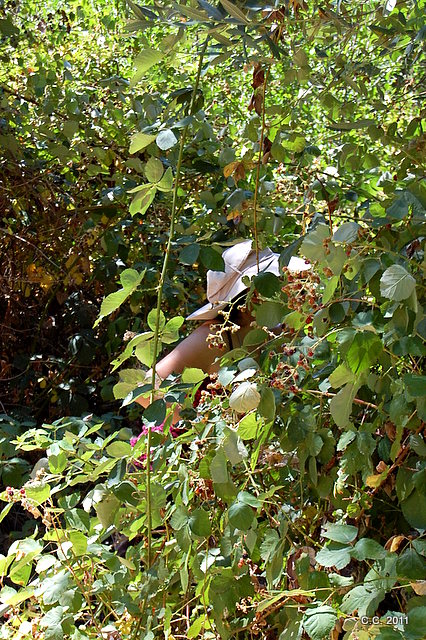 But then, she is a young'un and still has a lot of energy.

So, we had a great morning and came home with lots of blackberries. Tomorrow I will put mine in freezer bags and freeze most of them. I'll make a pie with the rest.
Next Monday they will come over to my place and we will have a JAM SESSION. It's fun to make jam with friends. We'll make a mess together, in one kitchen, and have some beautiful jars of jam to eat all winter. Yummmm!