Morning with the Goats

As I sat on a rock next to an oak tree we cut down, I thought to myself that life couldn't get too much better than this moment. 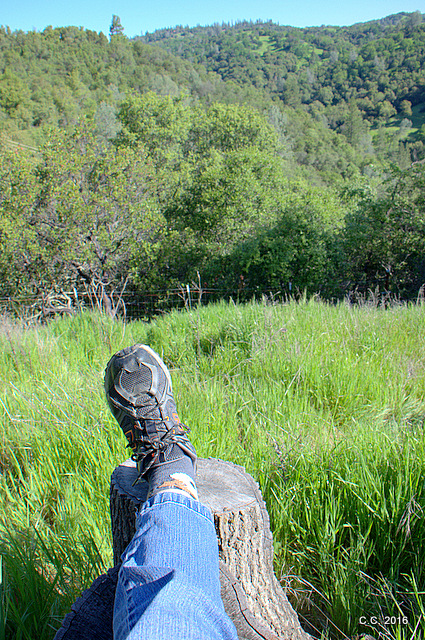 Our grandsons had been here visiting all week and both our grown sons came up on the weekend... one to visit and pick up the Beans... the other one to go skiing and visit too. We had such a wonderful time with the grandsons this visit. They are getting older. There's less supervision and more fun, less whining and more," OK, I will try that." More "We're happy to be here"...and they were. My neighbor's grandchild, Jocelyn, had something to do with this. They found a friend. It was wonderful.
But, when they leave, it's so quiet. It takes a little getting use to... not too long... and then we sit down and smile at each other.

This morning the Prospector asked me if I would come out with him and watch the goats while he did some sawing on a cover in the goat yard.... just to supervise them. It seems that our fencing for the big Nubians was perfect with the big goats but Moo, our littlest goat, decided to see if the grass was greener on the other side of the fence and took his cute little goat body through the fence last week... and then he couldn't figured out how to get back in. The Prospector had to chase him down and finally Moo found a way back through the fence and returned to his friends. So we are being extra vigilant now.
Steve's new job is called GOATHERD. I'm backup. We let them out into the field for an hour or so and we watch them. Also, they don't gorge themselves on grass and the grand assortment of spring goodies that are growing now, so we limit their time in the field. They seems to think this will be their last meal. Moo was getting bloated so we had to control the intake. 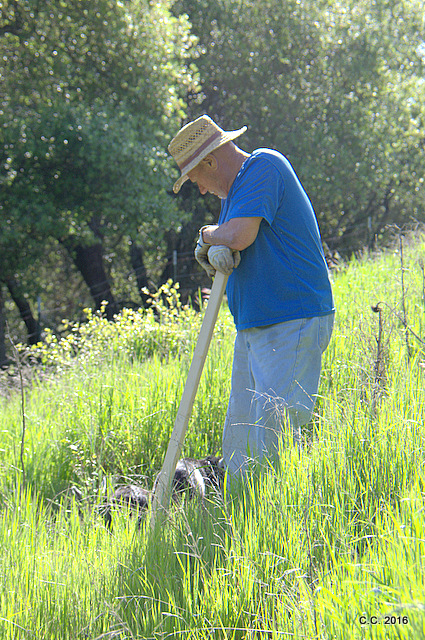 I love watching Steve. He talks to them and, well... they actually talk back.

So, this morning, we spent more than an hour out there with the babies and Annie... who was helping keep an eye on them too. She comes through the fence and hangs with us, until she gets bored, then she's off to herd the chickens or wild turkey. She's a busy cat. 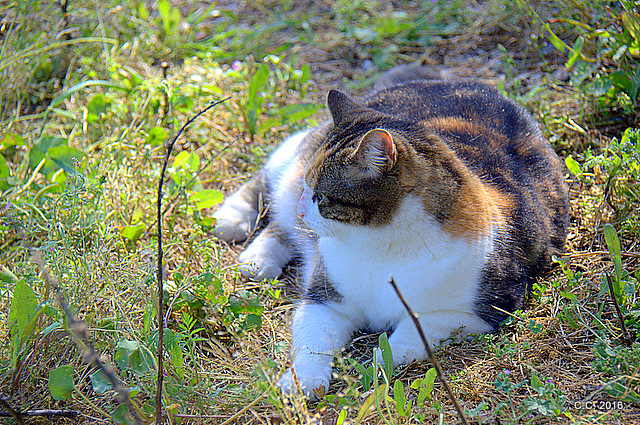 The little guys all have names now. We named Moo right away because he looked like a cow. When the Beans were here last week we named the other two Rocky and Kobi. I thank all my friends who offered names, but my grandkids rule and they made the final choices. So this is Moo... 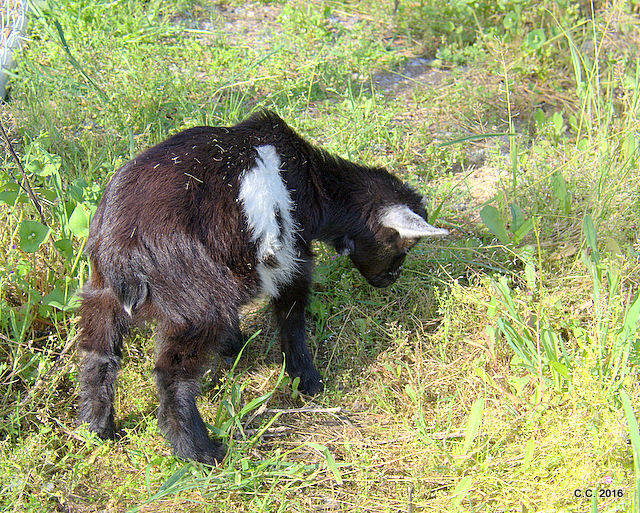 I love this little guy. He's a month younger than the other two. He's off on his own, investigating and exploring... and he's just such a little 'moo cow' goat.

His two cohorts, Kobi and Rocky tend to stick together, even though they weren't from the same mother. They look very much alike, except Kobi has a bigger patch of white on his forehead. They are covered with grass hay that they were eating from the bin before we let them out into the field.
This is what goats do... eat, poop and rest... and look adorable. Then, they eat more. 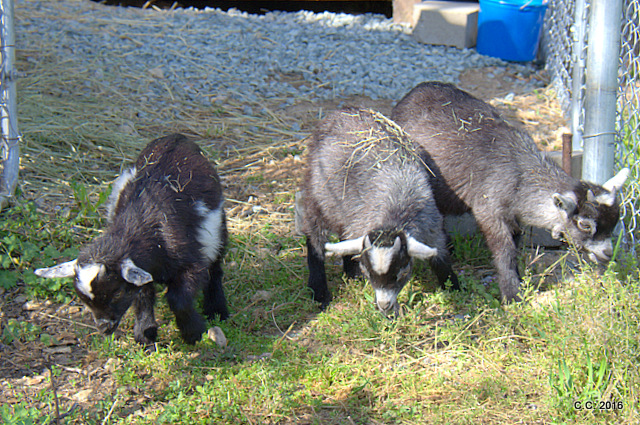 It's a sight to see... these little babies romping through the grass, looking for that special flower or leaf. 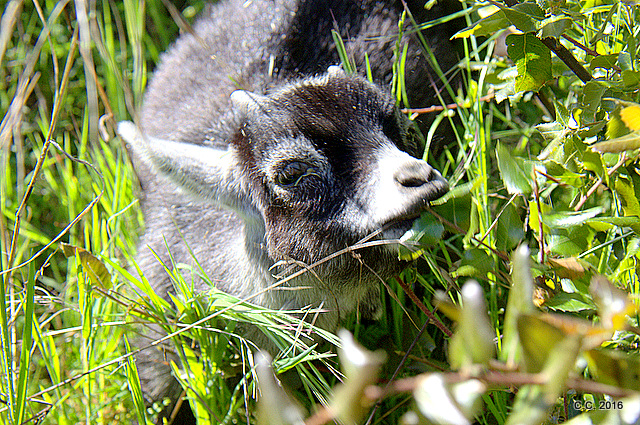 They love the Oak leaves. 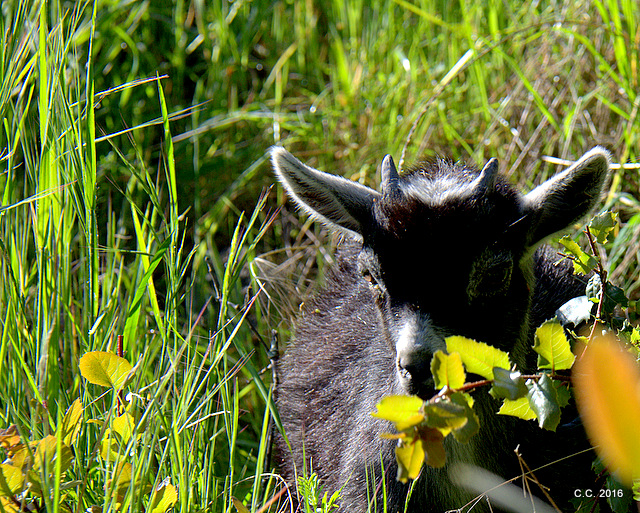 They keep moving around ... 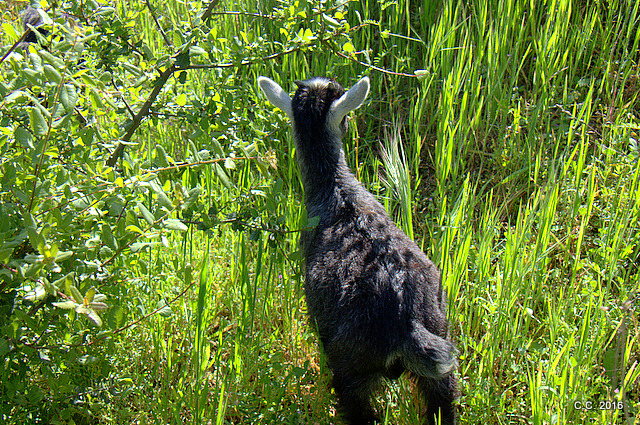 ...looking for the next wonderful and tasty thing. 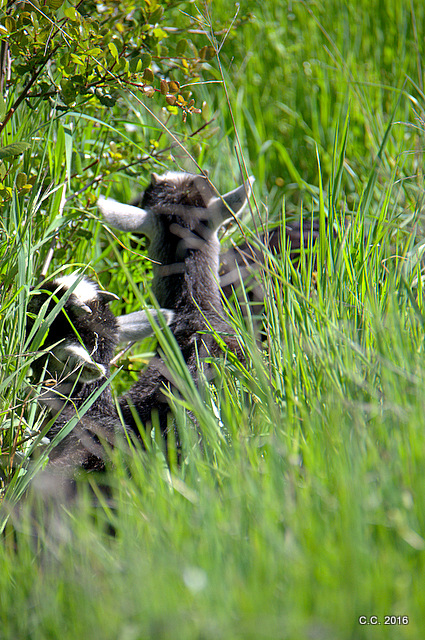 Reminds me of Robert Browning's verse...


The year’s at the spring,
And day’s at the morn;
Morning’s at seven;
The hill-side’s dew-pearled;
The lark’s on the wing;
The snail’s on the thorn;
God’s in His heaven—
All’s right with the world!
At least for now... on this mountain.