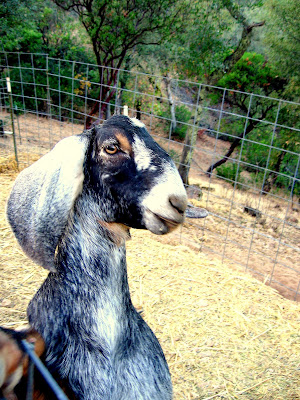 "I'm the biggest, most wonderful and handsome goat on Three Dog Farm. I command respect and I take care of business. I'm brave and I can jump higher than any of the other goats. I'm the king of the pasture and head of the pack." 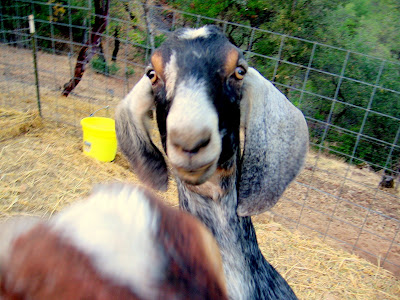 "Yah? But does he have a horn? I don't see any horns. I have a horn. Well..., it's not very big and I don't know what happen to the other one, but I can butt better than any of the other goats, as long as I lean to the right. I may not be the biggest but I'm unique. Bart tries to push his weight around here, but we know who the real "head" master is, don't we?" 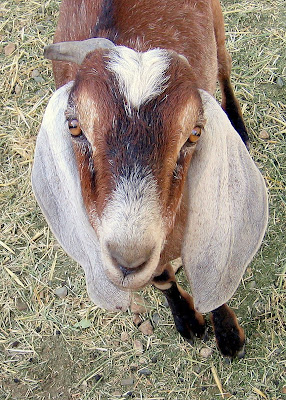 Listen to the Joy in your heart 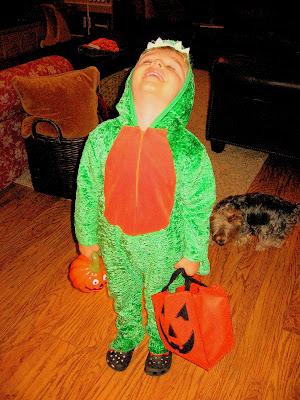 When was the last time you were this excited about something? Today, I have hope in my country and joy in my heart. I was agonizingly "on the fence" about this election and none of you really knew what Farmlady believed in because she was being so agreeable to all of you. Well, I made my decision. voted and even through I'm not sure how all this will play out, there is a part of me that feels like my little grandson on Halloween night. The excitement and anticipation of a new direction for this country is overwhelming. I didn't hate anyone and I don't have any "agenda" except maybe for GOATS and GRANDCHILDREN. So please take a good look at this little child and smile..., because everything is going to be just fine.

This is what America is all about

VOTE; A choice or opinion of a person or body of persons expressed by a ballot, spoken word, or raised hand.

VOTE: To elect, decide, pass, defeat, grant, or make legal by a vote.

Please go out there today and make a difference.
Posted by farmlady at 7:23 AM 1 comment:

Halloween with the Bambinos 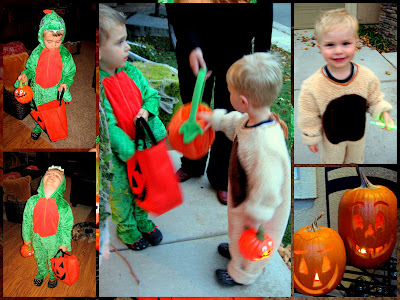 ...., and the bean was so excited that he could hardly wait to go out trick or treating. Then he seemed a little apprehensive when he got outside and heard the spooky noises from across the street. Little bean just followed along and giggled, watching everything. He ran around with his glow stick and just kept laughing. He's such a happy little guy.

After Mommy and Daddy took them around the neighborhood, the Bean came back and helped me give out candy. He wanted to give everyone handfuls. We had to explain to him that he would run out of candy if he gave each child too much. So, as it is with my oldest grandson, he negotiated with us. We ended up letting him give "One candy and one pencil." to each person. Then he would say " Have a happy Halloween, everybody." and he'd wave at them until they were gone. One time a little girl came up on the porch and just stood there. The Bean said, in a loud voice...," YOU S'POSE TO SAY TWICK OR TWEET." The little girl just looked at him. He looked back at me and said, "What I do Noni?" I told him that some really little kids get scared and forget to say trick or treat, but it's ok to give them something. He got really close to her and said..." You s'pose to say twick or tweet, but it's ok. Here." and he gave her one piece of candy and no pencil. Guess he figured if she couldn't talk she probably couldn't write either. Her daddy said "Thank you.".
Surprisingly the boys didn't seem to care too much about how much candy they got. They had a lot of fun and loved all the decorations. My daughter-in-law knocked herself out planning the day for the boys and she should have been really pleased with the results, because she and my son made it a very happy day for the Bean and his brother. I was so glad I was there.
I had lots of photos to show you but for some reason Blogger won't let me post more than one picture collage, so tomarrow I will try to post photos of " Daddy and the Bean carving the pumpkins". I not being very patience about "blog this" in Picassa. It's been acting up lately and I'm getting frustrated with the effort. Does anyone know if there's a trick to this? How come I see other blogs with endless pictures on them. How does this happen? If I do more than 3 single photos Blogger won't post them. Agaaah!!

Anyway, I had a great time at my son and daughter-in-laws this weekend and I hope that they didn't mind "Noni" being there for 4 days. The Bean and I made ghost cookies on Saturday and played "trick or treat" upstairs, again, with toys for candy and using the bedroom doors for front doors. We made phone calls to Papa and Uncle Matt, and the Bean told them all about Halloween and what he's did all day. We went outside in the rain with Noni's new umbrella. We read books and played some more while Mommy and Daddy took "baby bean" to the Mall. This grandchild of mine never stops except for sleeping. I wish I had just a little of his energy. "Nap time" is my new best friend and "Oh! It's 8.00 p.m. Time for bed. " A warm bath and a couple of stories and they were off to the land of Nod. Me too. 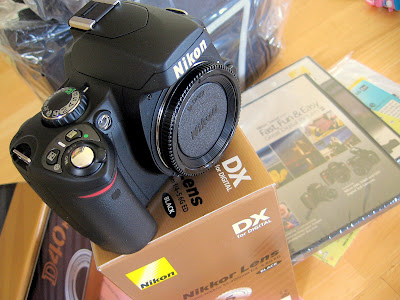 The package arrived an hour before I left on Thursday. So I took a picture of my beautiful, new Nikon D40, then tucked it away in it's box until I got home this afternoon.
I've read all the directions and charged it's little rechargable battery. I told it that I only speak English and have set the time and date. My next step was to insert the memory card. I looked in all the little boxes and there was no memory card. This camera comes with everything but the kitchen sink, but it doesn't come with a memory card? Guess it's like film and you have to buy it separately. I could have sworn the Canon Power Shot came with a card. Oh well, tomarrow I'll go get one and then the fun begins.
"How sharper than a serpent's tooth it is to".... be without a memory card. Sorry Shakespeare, just a little play on your words. I think I need some sleep. I'm getting a bit silly. That's what happens when you spend four days with a 2 and 3 yr. old. and then come home to the camera of your dreams. It's fun to be as excited as a kid about something.

Tomarrow I will treat you to ~Halloween with the Bambino's~. My old Canon point and shoot outdid itself. Got some really cute photos. Tell you all about my visit tomarrow. Goodnight.