Last week when Sis and I went to the Art Is You workshop in Petaluma, part of the benefits for signing up  was a free lunch. Most days we had a lovely buffet lunch outside. The lines were long but the food was delicious. 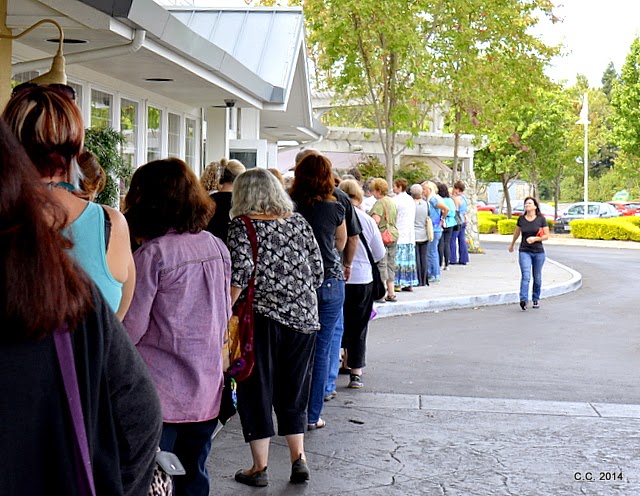 But one day, for some reason, we all got a bag lunch. A sandwich, a bag of chips, a bottle of water and I also got ... a very green pear.
So we took our lunch, sat in the bar and watched a little golf, and ate our bag lady lunch for an hour. When I saw the pear, this very green pear, I decided to save it for another day... hoping it would be ripe in a day or two and I would enjoy this piece of fruit then.
Well, I'm sure you can see where this is going. This morning I went to get my extra camera battery that I keep in a cloth camera bag. I reached into the bag and guess what? I touched something squishy, cold and rather disgusting.... and it wasn't green anymore.
Yes... I forgot the very green pear for a whole week. Sometimes you just get so caught up in the joys of vacationing and having fun, that you forget about a small piece of fruit in the bottom of your camera bag... you forget that a very green pear doesn't stay that way when wrapped in a warm place for a long time. 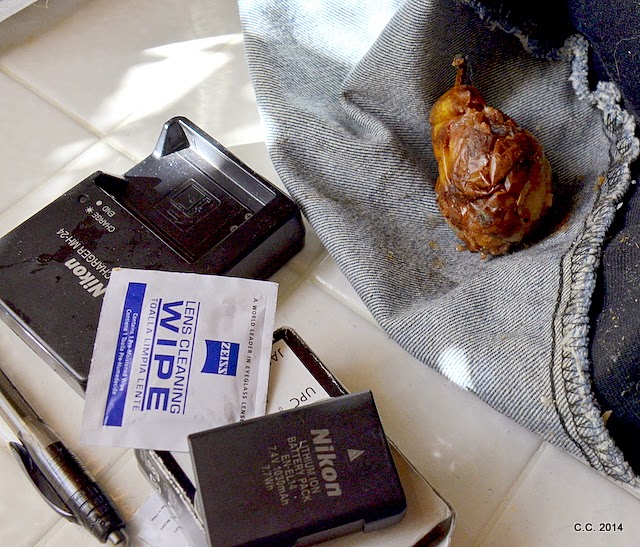 Well, it did what a pear does when left to its own devices... it got ripe... really ripe... all over everything in the bag.
So... the pear took a fast trip to the compost. 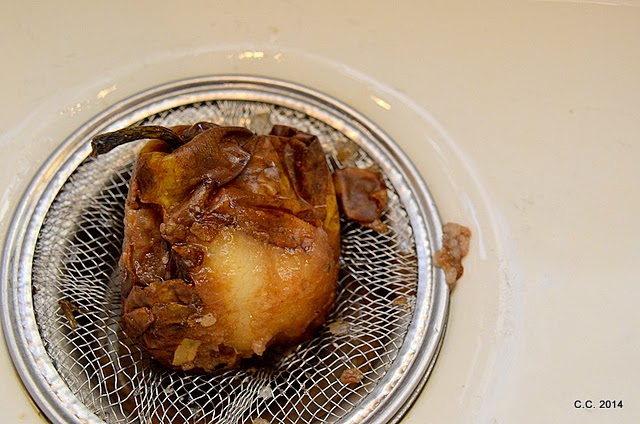 Last Saturday morning sis and I dragged our tails to the shower, put some cloths on and went to breakfast  before our next workshop.
I highly recommend the buffet breakfast at the Sheraton Sonoma Hotel. The food is delicious and there's a  lot of fresh fruit, yogurt and granola. 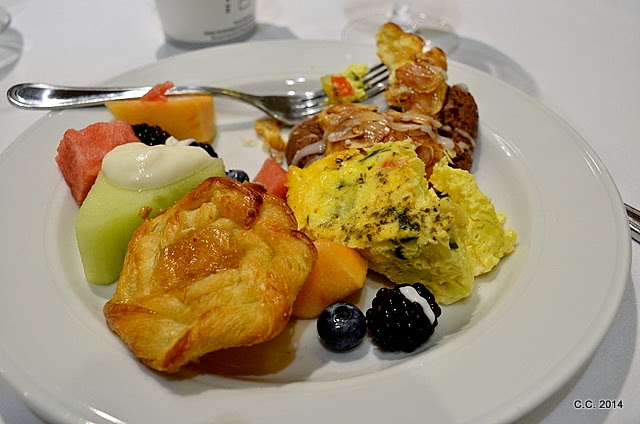 Oh... and sweet rolls. This is a sample plate. Some mornings there was BACON, sometimes delicious potatoes with egg casseroles, scrambled eggs and always Starbuck's coffee or tea. Delightful way to start the day.
So... after breakfast we would return to our room, brush the teeth, grab our supplies and head for our workshop of the day. This one, on Saturday, was called Dreampunk Mask. Our fearless leader and instructor for this class is one Michael deMeng.

I don't know what it is about this man. 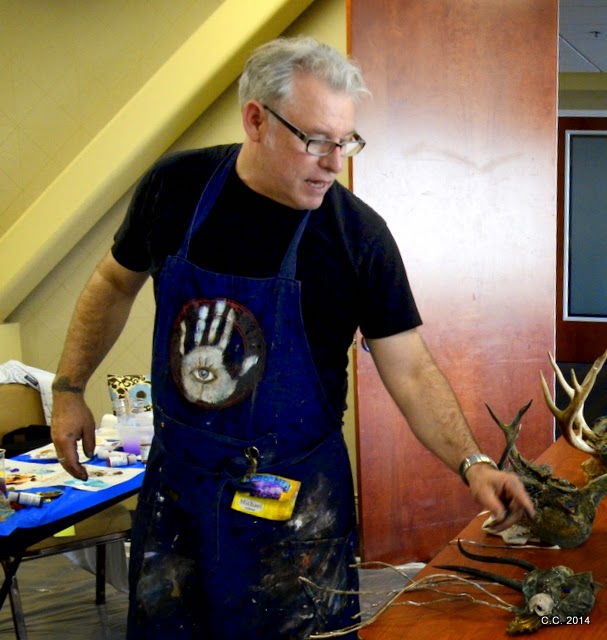 He looks like the average guy. He's very nice. He is an exceptional artist and he loves to teach...
But... he has this more sinister side and it comes out in his work. Before I tell you about his class I want you to go to this link.. and his Google images.  Take a good look at these images. This is what he does.... and I believe that inside this mild mannered person is a full blown. dead or alive, Alchemist... made of toy parts, paint and an insane brain function that transcends mortal man. He probably has all the "snips, snails and puppy dog tails" in there too, but mostly it's weird, demented de Meng stuff... done really well.
This is my second workshop with Michael and I believe that I have officially become one of his major fans. He is one cool artist and this class was more fun than a barrel of (reassembled and transformed) monkeys. When I find myself laughing out loud, because I just figured out how to paint "light" into a series of colorful layers of paint... I know I have learned something about art and myself.
This workshop was called Dreampunk Mask and we were asked to bring a mask of any kind, a product called Epoxy Clay, some acrylic paint and some brushes.
I found an inexpensive mask at a party store and I wanted to use the deer skull that a neighbor had given me. This is how it all started. This would be a mask to hang on the wall, not to wear. 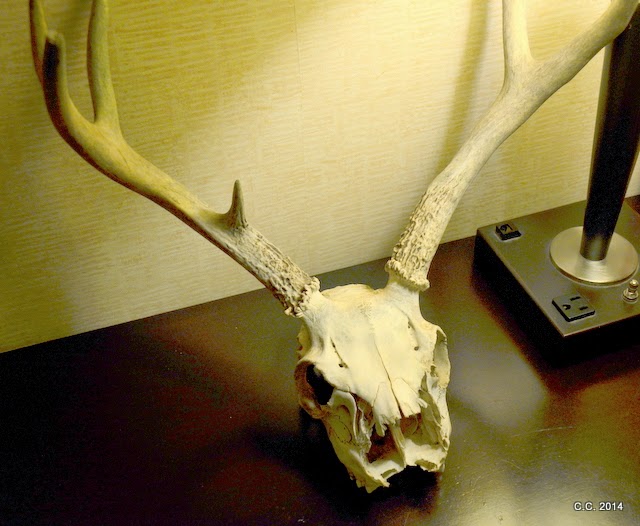 After the mask was firmly attached to the skull... with Epoxy clay and tin foil... 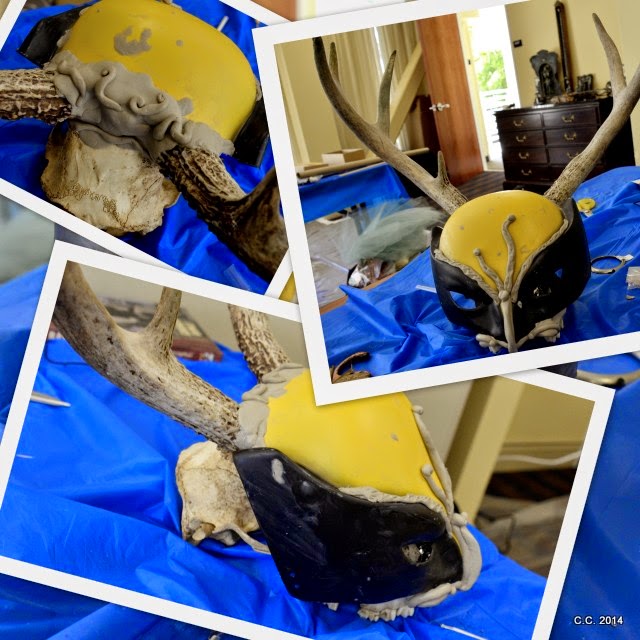 I added some clay embellishments and brought this deer 'back to life'... in another form. I call it Revenge or "He who seeks those who destroy animals."
It's all about anthropomorphism and myth. In Jewish mythology  there exists a giant kind of stag creature by the name "Keresh". maybe this would be a good name for my mythical creature.
In the story of Saint Hubertus (a Christian saint)  on Good Friday morning, when the faithful were crowding the churches, Hubertus joined a hunt. As he was pursuing a magnificent stag the animal turned and, as the pious legend narrates, he was astounded at perceiving a crucifix standing between its antlers, which gave him a change of heart that led him to a saintly life.
And then....Cernunnos, a god in Celtic mythology that possessed two deer antlers on the top of his head. He was known as The Horned One or The Horned God despite having antlers and not horns. Cernunnos is also known as The Stag Lord, The Horned God of the Hunt and The Lord of the Forest.
I like to think that these myths about deer are because they are such tranquil but strong creatures, with a look of nobility and pride. In Celtic mythology, the deer is a magical creature, able to move between the worlds. In Ireland, many tales have humans transformed into deer.
And so, with these images in mind and the idea that this deer might want revenge for its death by other animals or humans, I chose to make my new creation a buck that would wreak some form of retaliation on others for its demise. (Oh my, that says something about me doesn't it?)
Yes, it's sinister and scary to think that every deer that is hit by a car or shot by a hunter will come back as a huge fiery monster that seeks revenge... but this is Art and the myth is mine.

I secured the mask to the skull with foil and epoxy clay and then started the process of building up the face and blending it into the antlers. 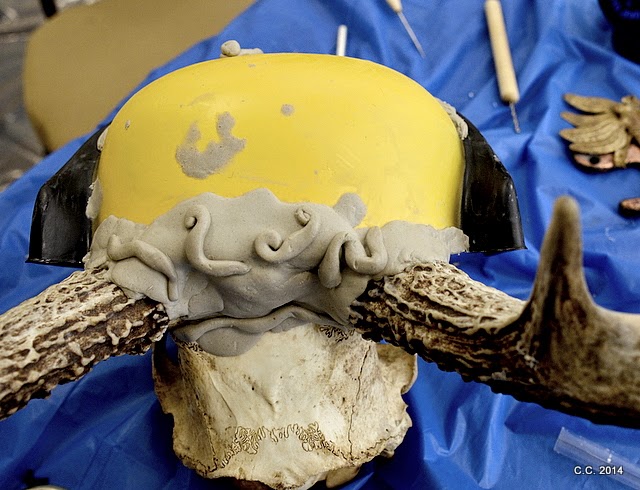 Can you see were the skull plates are connected to each other in the middle bottom of the photo? Isn't that a beautiful pattern? Nature is an intriguing complexity. There is always some amazing intricacy in forms that are not man made. Look again at the antlers. They're like a tree that grows out of its skin. Antlers are extensions of the skull grown by members of the deer family. Antlers are shed and regrown each year.
(My neighbor did not kill this deer. He found the deer already dead. We don't know the cause. "D" is a hunter and has killed other deer before... but only for the meat and always with great respect for the animal. I couldn't, personally, shoot and kill any animal. You do have a choice when you have an abundance of food available, as we do in this country, but that's not always the case and some folks have to find their own sources.)
Anyway, my feelings are known and I will move on to the artwork. 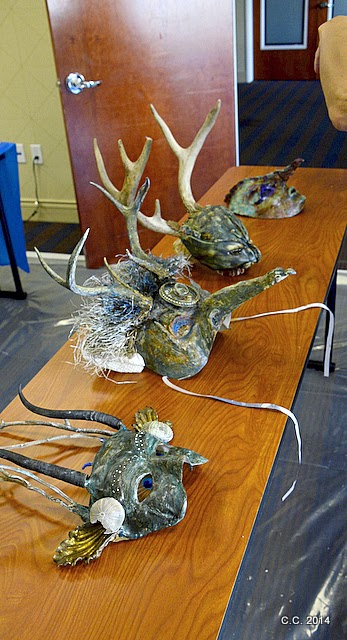 After we finished, we displayed the masks and Michael critiqued them.... always pointing out the best aspects of each one and ideas for improvement afterwards.
This mask was my sisters. She is showing how it's worn. 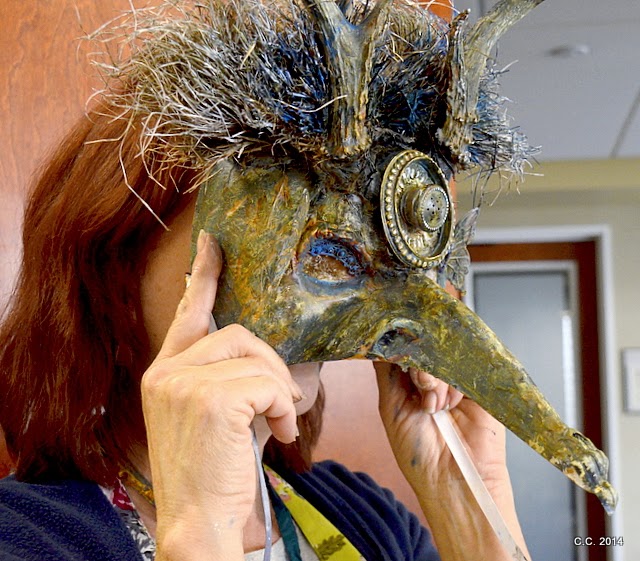 It was kind of a Pinocchio mask that she completely changed.
She put a small set of antlers on the top with some found dried grass for hair.
This is Big Bird at his most incomparable moment.

This artist went outside the classroom and found some dried twigs to use on her ladies mask. Then used some horns that she had ordered and shells to embellish. The most amazing and creative idea was the use of peacock feathers for the eyes. 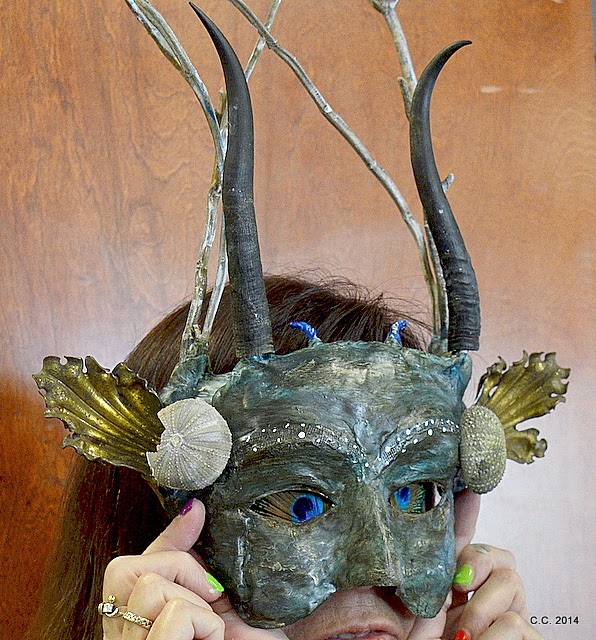 I love her fingernails. Each was a different color.

This mask was a very simple mask that, with the use of epoxy clay, was recreated into this amazing creature.The mouth, eyes, nose and forehead were all built up out of epoxy clay. Great work. 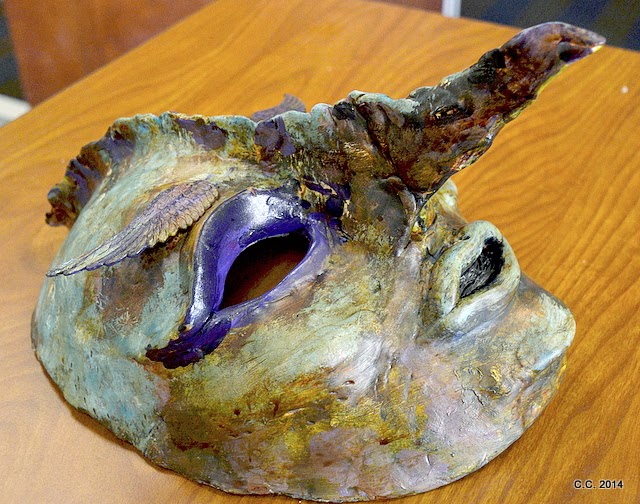 She then used a thin "slip" (water and clay) to covered the whole mask. I love the wings for eyebrows.

Keep in mind that all of these faces were started with a plastic mask like my grandchildren would wear on Halloween. In Michael's information sheet he wrote, "Making masks is different than merely wearing them; it can be a process for artists to reveal what is veiled inside one's soul."
When I look at these... and especially when I look at mine... I think that man, or woman, has a definite "inner place" somewhere deep inside and whether myth or magic, it is in our abilities to believe what we choose, given the scope of our imagination.  Mr. deMeng says, "It is a strange art form that keeps secrets, but also simultaneously unearths hidden worlds. Oh, the irony."
Where do you think your "inner place" is? What is it like?  How do you express this in the real world?

Here are some photos of my mask taken after I got home. I don't feel any animosity from this mythical deer... but I will watch for any change of expression or movement on the livingroom wall. 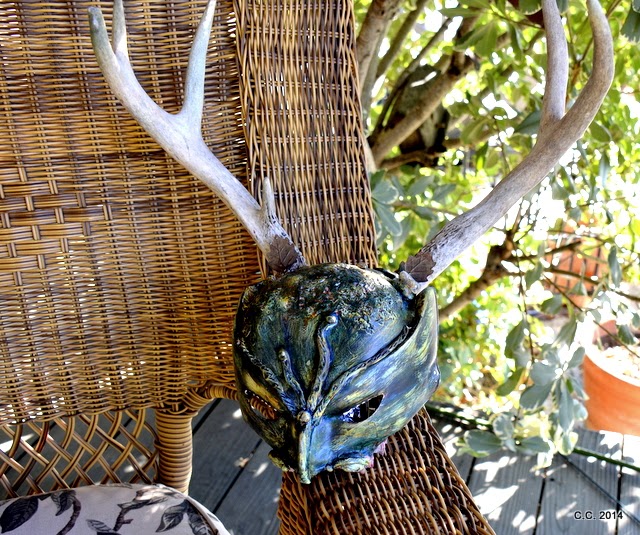 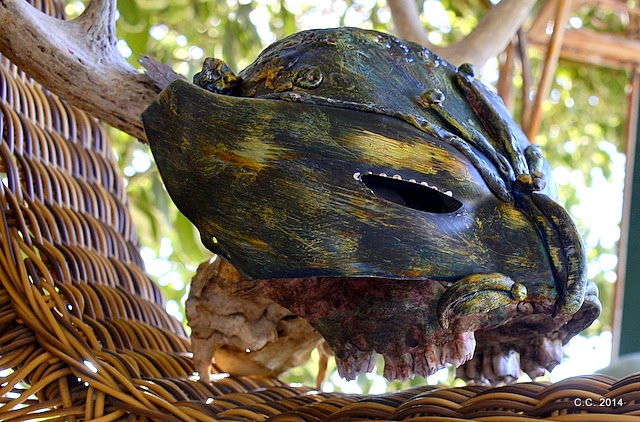 A view underneath the mask. 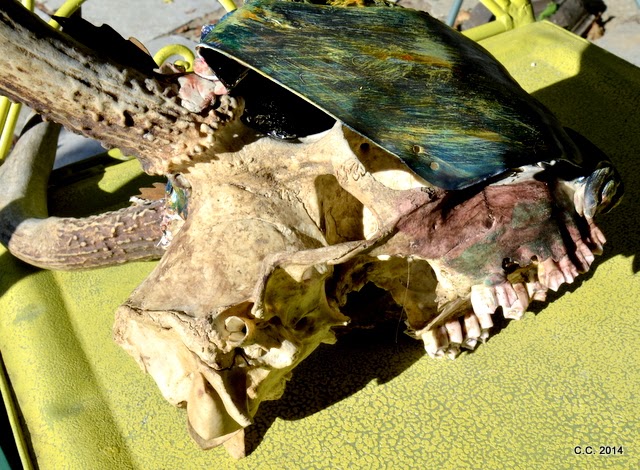 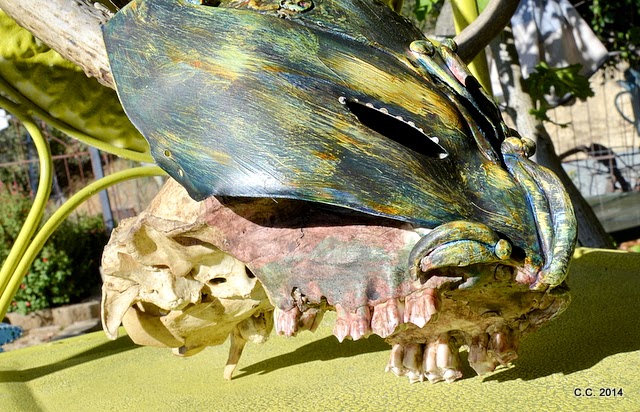 I would like to do more work on this mask. There are some transitions from the mask to the bones that I need to make. 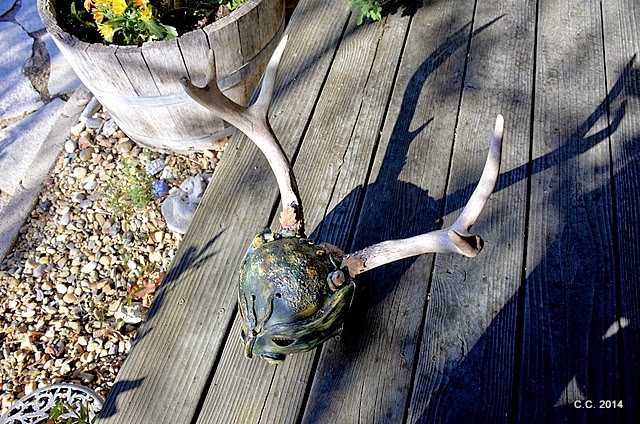 The dogs do not like it sitting on the front porch. They back away and growl... just like in a spooky movie. Maybe there is a deer spirit there. I will let you know how this plays out and if any odd occurrences come of it.
After all... Halloween is almost here.