Remember.... wherever you go, there you are. ~Earl MacRauch~ The Adventures of Buckaroo Bonzi Across the Eighth Dimension (film), 1984 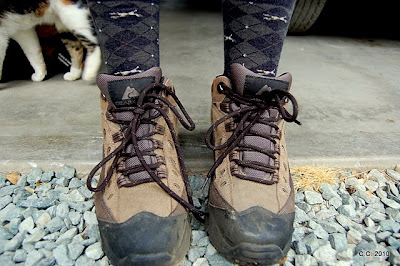 Got my boots....  (Yes, I will double tie my shoestrings.)  Do you like the socks? Had to add a little "California" to the Montana landscape.
And, as John Denver wrote..."All my bags are packed. I'm ready to go".
See you in a couple of weeks.
Posted by farmlady at 9:43 AM 11 comments:

"Cause I'm leaving on a jet plane
I don't know when I'll be back again..." ~John Denver~

Well, I actually do know when I'm going and when I will be back, but Thursday....  I'm going to Montana. 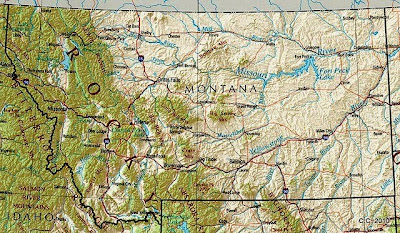 I will fly to Salt Lake City and then take a "2 seat Cessna prop" to Kalispell. Nope, I'm kidding. That's what the Prospector said because he knows I'm not comfortable flying in airplanes. He isn't either but I'm the one that's getting in the airplane so he thinks it's OK to give me a bad time. I'm sure that the flight to Kalispell will be in a good sized Jet with plenty of fuel and why would a terrorist want to mess with a little trip to north west Montana anyway. What would they fly the plane into? a grizzle bear? I'm sure that the flight will be fast and uneventful. Right? Right?
I'm so excited about this trip. I wanted to take a train... but that would have cut into my time up there with my friend and that's a trip that the Prospector and I want to take in a few years...together. So, I have to put my "big girl" pants on and just get into the airplane and GO.
Just look at what awaits me.... 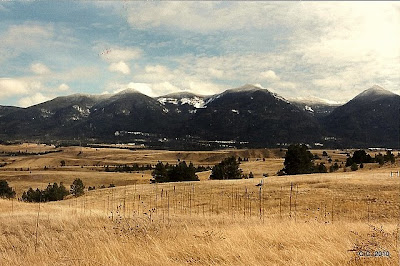 This is the view from my friend "D"s property. This is "Big Sky" country. She and her husband built their own home and live a life style that most of you can only dream of. I have lived her life vicariously for years. Even when we were teenagers I would see her off at the airport as she flew, with her parents, to every part of the world. I always wanted to go with her but I would stand at the airport window and wave goodbye as she flew to Europe, Africa and the Middle East to be with her family. She was the first "jet setter" that I knew. She was my world traveling friend. She would come home every summer and we would continue being best friends. She became a part of our family and well...I wrote a post about it some time back. Take a look here.

She came back to California in her 20's to go to college and then she finally settled in the northwest.. then Idaho and then Montana. She has been up there for many years now and says that she will never leave.
She lives in the middle of nowhere... but it's the most beautiful "middle of nowhere" I have ever seen. I've only seen photos. Now I will get to see all of this... in person. For the first time in ours lives I will be the one stepping off the airplane while she waves from the terminal building. She said it was "my turn" and that's true. It is.

A few years ago they built a chicken house on their property. She has two grandchildren that live in the Seattle area and come to visit every now and then. This photo was taken  of "D" and her granddaughter sitting in the almost completed chicken house. I love it. It reminds me of how long we have known each other
and how far we have come in our lives. 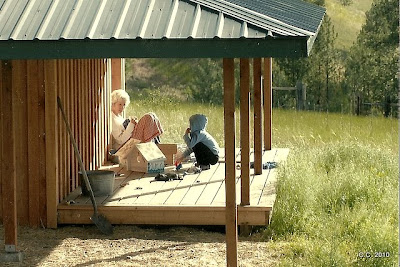 And yet.... how much things stay the same. When the little girl, came busting out of her grandmother's car in the 1950's, snapping pictures with her little Brownie camera and running around in circles.... I knew that we would be friends for a long time. This was "D". She was my hero and still is.

But... she better be standing there in the airport terminal with a stiff drink in her hand and a big "Atta girl" look on her face. I don't fly for just anyone. I can't wait to get my feet on the ground and then , as the song goes...." I don't know when I'll be back again..."

P.S. Please do not comment about your BAD experiences on airplanes. Only "atta girl" comments will be allowed. Thank you.
Posted by farmlady at 12:12 PM 11 comments: