The Pupster on the Mokelumne 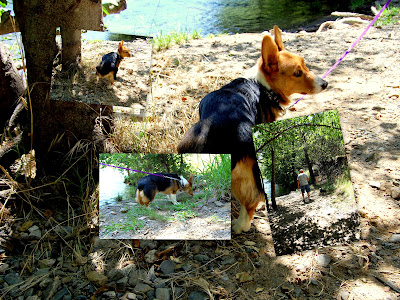 Last weekend we thought that it was time to introduce Carl to the beautiful Mokelumne River. We drove over to Electra Rd, a narrow road that follows the river east from Highway 49 to the Electra Power plant. Carl is a great car dog. He loves to go for rides and he was very excited about being in the car. If we slowed down to let someone by, he would stand up and look out the window to see who it was and he would bark if he thought that they might be a threat. So when we got to the river and stopped, he was ready to get out and investigate. The Prospector put him on a leash and off they went. The Pupster was overwhelmed with the new smells and scents of other dogs and critters that frequent the area. He went from one tree to another leaving his own sign of dominance until he didn't have anything left. Then he needed to leave a more solid reminder. I always get the feeling that animals, especially domestic ones, are embarrassed when humans are watching. But dogs are just dogs and when Nature calls, they just find a place and leave their droppings efficiently and without pretense. When he was finished doing his duty, Carl continued to sniff out the area, with his nose to the ground and didn't really pay attention to the huge body of water flowing next to him. 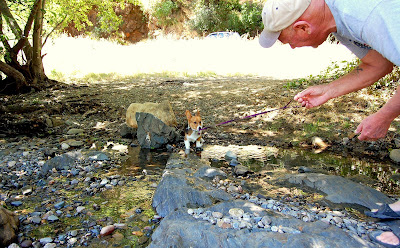 Then the Prospector said " Carl, lets go down to the water." Well, to paraphrase an old saying..., you can lead a (Corgi) to water but you can't make him drink. His paws touched the cold water and he stopped, dug in and would not move. "Dad" talked to Carl and gently tried to make him walk into the water but Carl was a frozen statue of a dog. The term "stubborn Corgi" comes to mind. He planted his feet and looked at my husband and then at me..., and HE DID NOT MOVE. 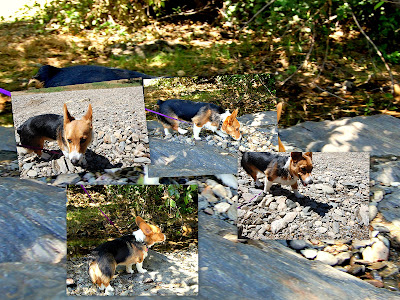 Corgis are suppose to like water. But this was BIG water and Carl wanted nothing to do with it. We let him have his lead and he went on with his walking and sniffing,only he took the high ground and NEVER got into the water. We will try again later in the summer when the water is low and the sun has heated up the river enough for Carl to be comfortable sticking his little paws in it. We wouldn't want our sweet, little purebred to be traumatized by this wild, old river. We'll try again another day. Carl will grow and the river will wait. One paw at a time..., one little paw at a time.