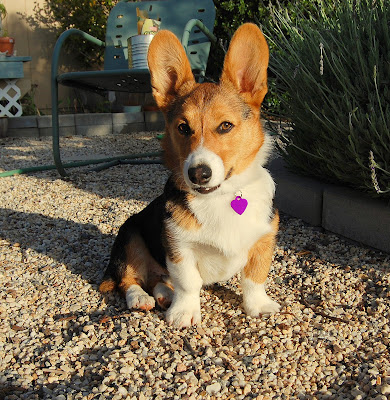 When The Prospector called me on Wednesday and said he was going down to a Farm,in Alcampo, to"Look" at a dog, I said "Fine, just don't buy anything until I get home". Thursday night he called and said that he had "Fallen in love". In 44 years of marriage I had never heard this statement from him before.
He said that when I drove home on Sunday, he would meet me at this farm and show me this puppy that he was so "..in love" with. I said goodby to my sister Sunday morning and drove out through the delta, across the Sacramento Valley, through Lodi and headed east to the ...only a post office, don't blink or you'll miss it town of Alcampo. The Prospector was waiting on the corner of two rural roads where we had planned to meet each other before we drove to the ranch. I followed him for a couple of miles and we arrived at a wonderful horse ranch with an entourage greeting of 7 Pembroke Welsh Corgis wagging non-existent tails at us as we drove in. It seems that these dogs are all the happy family of Carl, last of a litter of 6 and the cutest little puppy you ever saw in your life.
It was love at first sight. Hands down. Not a minute of doubt. This was THE dog we have been looking for. This was the little guy who would be a part of our lives from now on. Moke would have approved. It was a match made in heaven.


Carl is a adapting well. No doubt about it. He is in command and marking his territory. He's lovable and very affectionate. He's curious and smart, has won Maggie over in two days, although Maggie barks and worries when he runs around fast. Annibel, the cat is another story and may take a bit longer to adjust. Carl had cats in his life so he thinks that Annibel is OK, but Annibel is not so sure. We are working on the relationship. 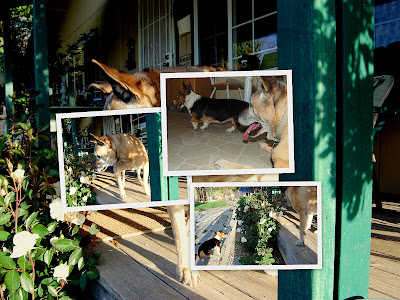 This little dog is a breath of fresh air for us. The final "cure" for the sadness of losing Moke. We will never forget our wonderful German Shorthair and he can never be replaced but this little dog will bring us such happiness..., in two short days, he already has. We are laughing again. Dogs Rule.....