Maggie has finally found her maternal instinct..., in just 5 days. I guess it just lays dormant in all of us until some cute little baby starts running through the house, causing chaos and 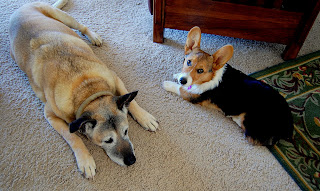 needing some attention. Poor Mags is tired, through. She says that her arthritis is really bothering her with all the running around and getting up to monitor the "speedster" . Carl thinks that Maggie is one of his pack now, and his resident chew toy. When he gets carried away, Maggie growls and puts her head on top of him, as if to say..., "Ok squirt, stop." , and Carl stops. He likes Maggie and wants to be her friend. He's very smart and seems to know when Maggie has had enough.

They sat together and posed for this picture. I said "Hey guys, SMILE!" and they did. How cute! I just love how dogs know about other dogs and "pack" together. Carl is so good for Maggie. He has lifted her sprites and given her a new lease on life. They have accepted each other except for one thing. Carl sleeps in a crate in the livingroom and when I tried to move it into the bedroom , where Maggie sleeps, Maggie barked and would not let him into the bedroom. For some reason she doesn't want him to invade her sleeping quarters. We'll keep trying. 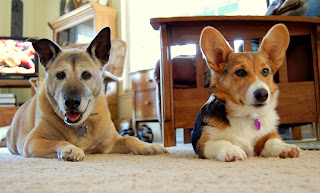 The cat, Annibel, is another story, for another day.....