Things that go bump in the night... are only children in disquise.

I arrived at my sister's, last Monday afternoon, and settled in. 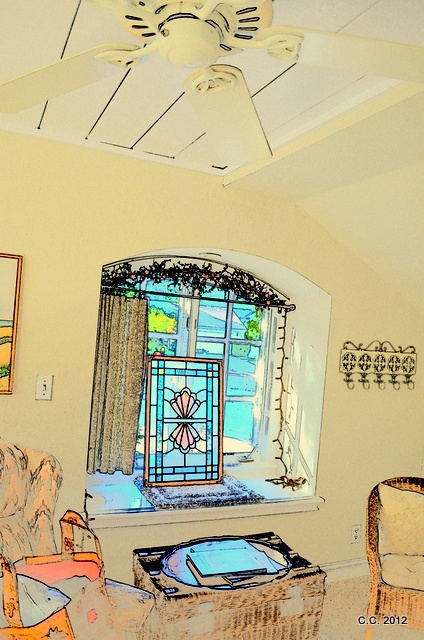 My upstairs bedroom was charming, as usual, and all was well.
Tuesday we "shopped 'til we dropped" We had shoes to buy for an upcomming trip, that I will talk about in a separate post.
We spent a glorious morning in a shoe store called Designer Shoe Warehouse or DSW in Dublin. This is a shoe lover's paradise. It's almost overwhelming to the inexperienced shoe devotee. It's hard to stay focused when they have YOUR SIZE in so many different kinds of shoes and at REALLY GOOD PRICES. 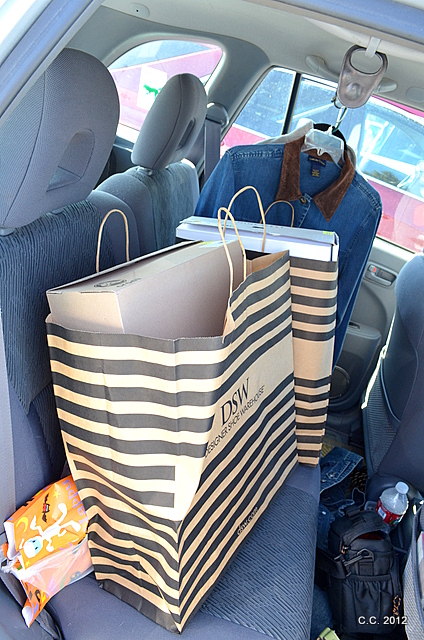 We exercised some self control and bought shoes that will be good protection in 40 degree, rainy weather. (That's a hint about the trip.)
Wednesday was the BIG day... the reason for the journey to see my family. It was all about the Beans (my grandsons) and HALLOWEEN.
There was excitement in the air. 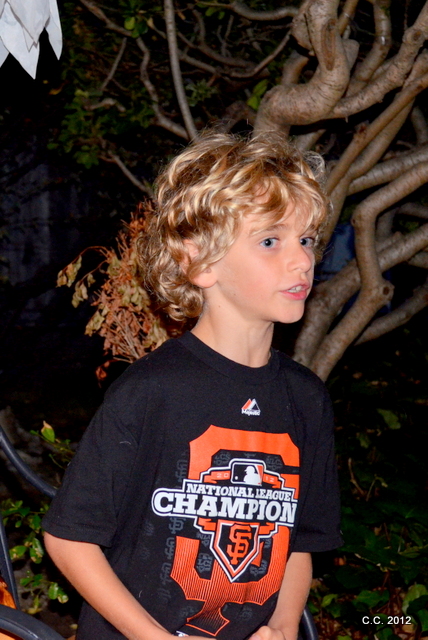 It was a couple of hours before dark and guess who hadn't decided what costume he wanted to wear? First he wanted to go "as himself". We talked about this... about how this was a night of transformation and creativity. He listened, but wasn't convinced that he wanted to go as anyone but himself.
On Tuesday night I brought a wig and a mask with me to see if he could come up with something good. Some "props", as it were.
It didn't quite work. The wig and the mask were all too big... too much. Yikes!! 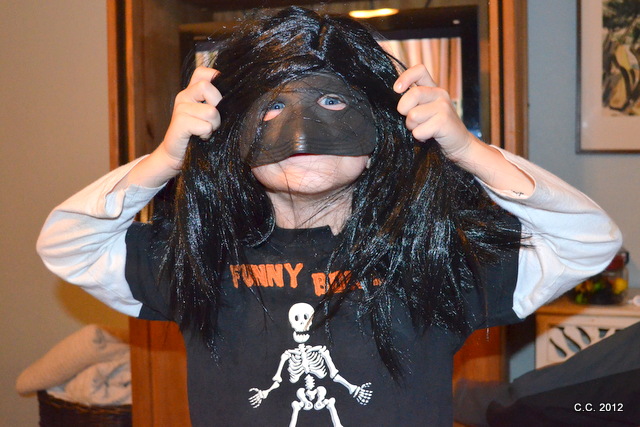 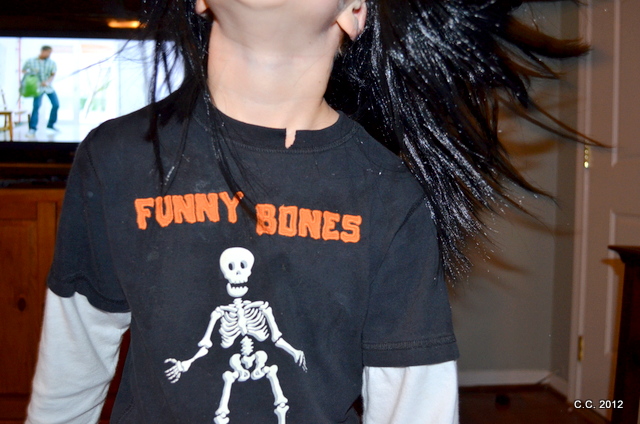 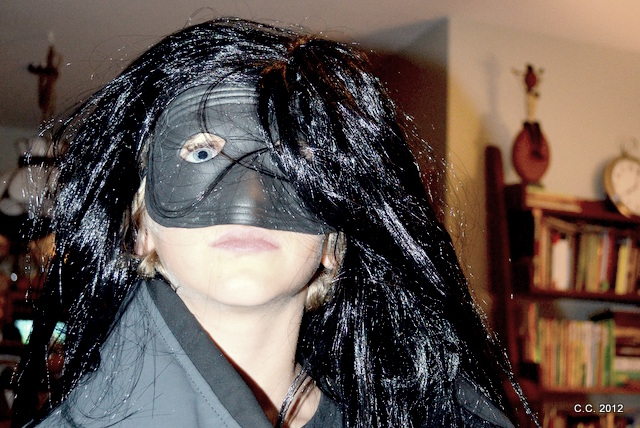 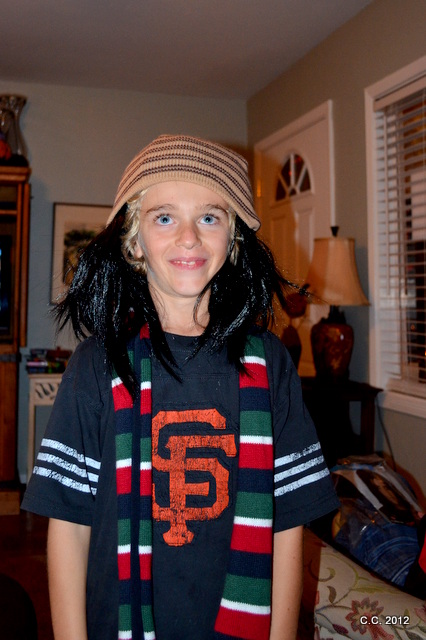 He left for his bedroom and came back with more of a "pirate" look... or "goth...punk...hippy" combo. Not too bad!  It was better, but needed refining.
Then, as all creative little children usually do. He changed his mind, again and made a final choice. He got an old sheet from his mom. We cut some eye and arm holes in it and he was finally ready to met the street goblins as A GHOST.
I was so glad that he decided on something. It was all about being creative and he wanted to come up with the idea himself. He was very pleased with the old sheet ghost. It just goes to show you how important it is to let a child have some leeway and some (a few!) choices when it's not a critical, life or death, situation. The Bean was so proud of his creation. He felt like it was a night for he and his brother to make a statement about what they thought HALLOWEEN represents and being someone different. The Bean did.
He will probably be protesting about some inequities of education some day. He and his brother are very determined little beans and, sometimes, they stand their ground like stubborn mules. That is a familiar behavior in this family... like some other little boys I knew... a long time ago.

Latter, Dad and the boys hit the street. ready for action.
Little Bean was a pirate for the evening and he was ready. 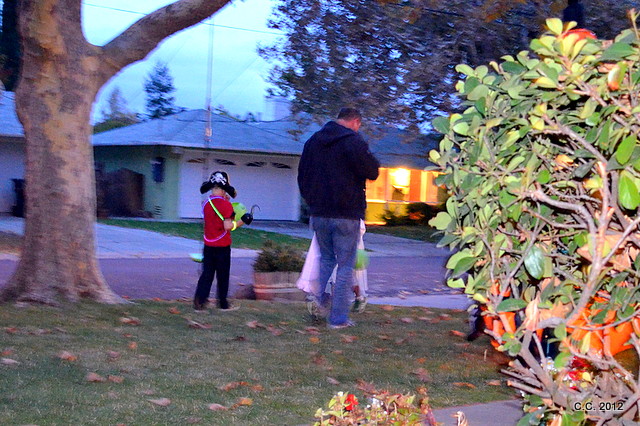 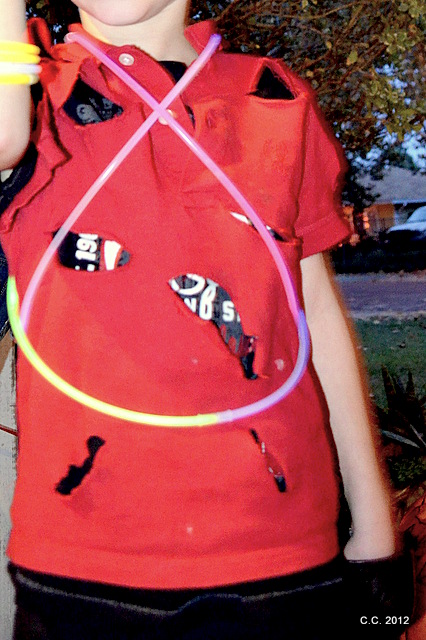 This was his own idea of a PIRATE... a creatively torn shirt and glow bracelets made into a buccaneer's warning system and holding his loot bucket with his Captain... hook. He even had an eye patch. It was a bright and wonderful costume. He glowed in the dark.

Darkness fell. The fog moved in and.... 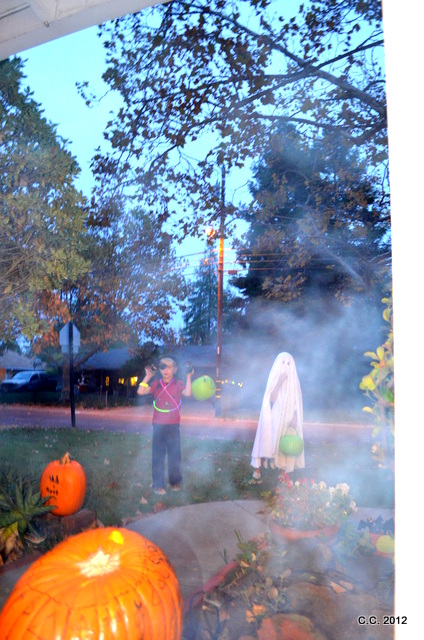 My Daughter-in-law's fog making machine, on the porch, turned my old childhood home into another world... we almost disappeared from the street completely. 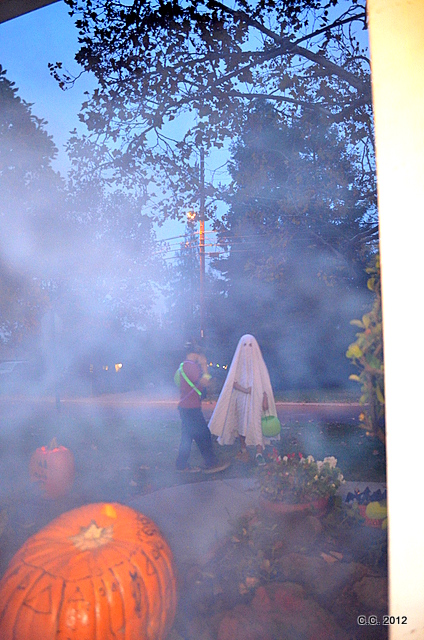 as our little goblins disappeared into the mist. Robbin and I finally got the fog machine under control and it was a great success.

The Pirate ship waited for their return and the world, for a few short hours, turned into a happy place of beautiful princesses, ghosts, goblins, strange beings of unknown origin... and neighbors that stopped to say hello and visited with Robbin and I. It was a night of enjoyment and fun. 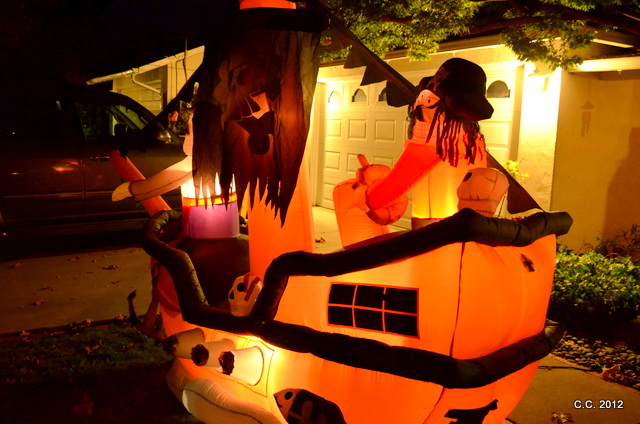 I think that my Mother was there too... in spirit. She loved Halloween. She would have been so happy to see the house all decorated like this. 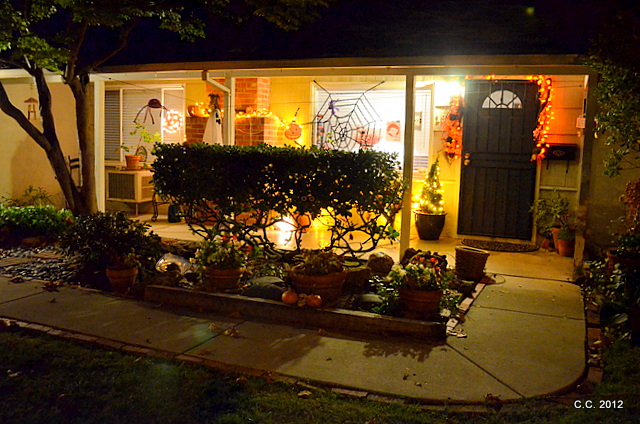 Even the jack-o-lanterns looked pleased... in a spooky kind of way. 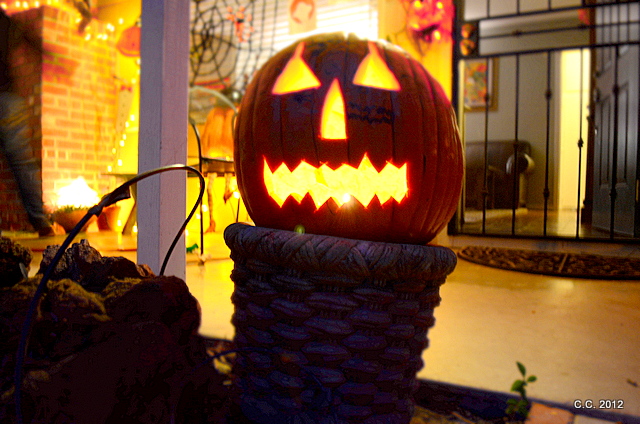 I took my place, on the porch and gave out candy...as I have done so many times before. 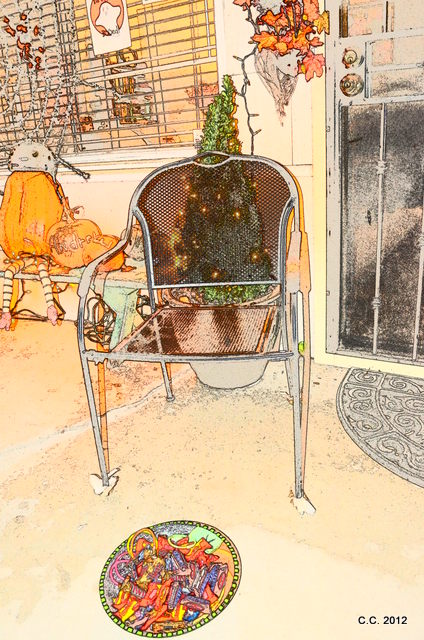 It was a wonderful evening.
Help yourself to a piece of candy.
Hope you all had a Happy Halloween.