Yes, when you make a bet with someone and you think that you have the best baseball team there every was... Guess what? Someone is going to loose. Sometimes "Pride goeth before the... you know what I mean.
My friend, Dawn, who lives in Michigan made a bet with me. She just knew that her beloved Detroit TIGERS were going to win the World Series. She KNEW that they would be the World Champions.
I knew that the GIANTS were going to win. I knew that ROMO, POSEY, SANDOVAL and the WHOLE TEAM were going to make this happen.
So... WE MADE A BET.
Whoever lost the Series would send the winner a gift. We put a limit on the amount and did a email "handshake" on it.
Well... I don't want to cast aspersions on the defeated, rub an open wound... but,
YES!...
WE WON THE WORLD SERIES.
OUR SAN FRANCISCO GIANTS WON THE WORLD SERIES.
THEY PLAYED THERE #@$$es OFF.
THEY WERE AWESOME.
So as life shows us, after this week of Presidential election and craziness, we sometimes have to swallow hard and move on.
A few days ago I received a box in the mail. 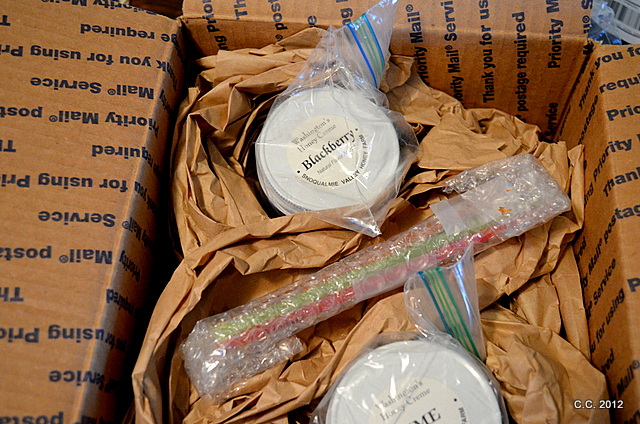 I received a box of HONEY. 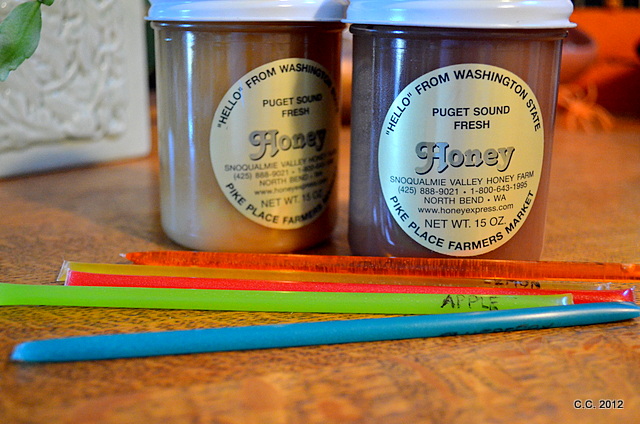 Wonderful jars of honey from Washington State called Snoqualmie Valley Honey Cream. Dawn had written an email recently about this honey. She waxed poetic about the flavor, the consistency, and all the different flavors that the honey was made with. She also sent some honey straws in different flavors.
What a nice gift! I was impressed.
She confessed that right after we made our bet, she bought the honey straws and smugly thought to herself, "Won't these make a perfect consolation prize to send Connie!"
Then she wrote, "I'm afraid that being such a smart-ass might have jinked the Tigers and contributed to their loss. I hate to shoulder that responsibility, but (hanging my head in shame) I'm afraid I must."
And then she added, "I officially hand over all bragging and neener-neener-neener rights to you... BUT, THERE IS ALWAYS NEXT YEAR." and signed it, "Love, from a die-hard Tigers fan, Dawn."

This morning I woke up to the weather that I have been waiting for. 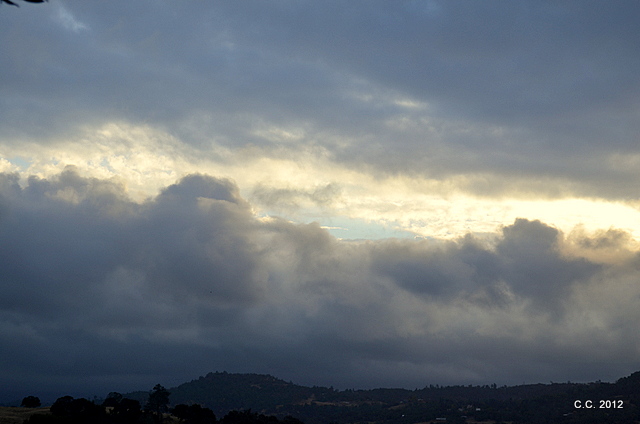 Cold, windy, "Winnie the Pooh" weather. The kind of weather that brings tears to my eyes, puts shoes and socks on my feet... and a scarf around my neck. It's so beautiful out there that it's hard for me to sit here, in front of the computer, and write. I want to feel the cold wind on my face.
The Prospector took off to help a neighbor and I decided it was time to eat breakfast... in style... with some nectar of the gods.
I grabbed two eggs... the new hens are finally makin' eggs and they are beautiful. 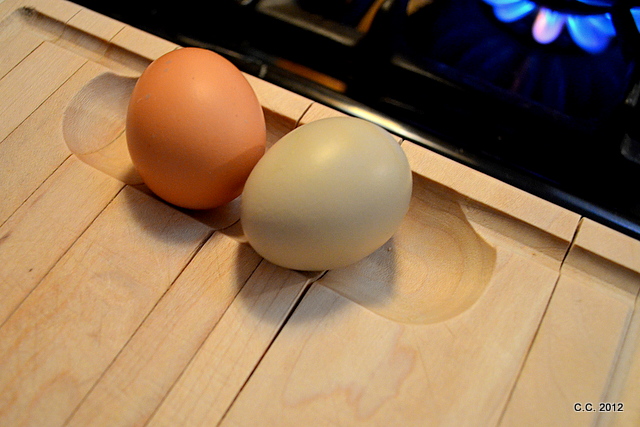 "Fried em up in a pan"... well, actually I scrambled them with some bacon. 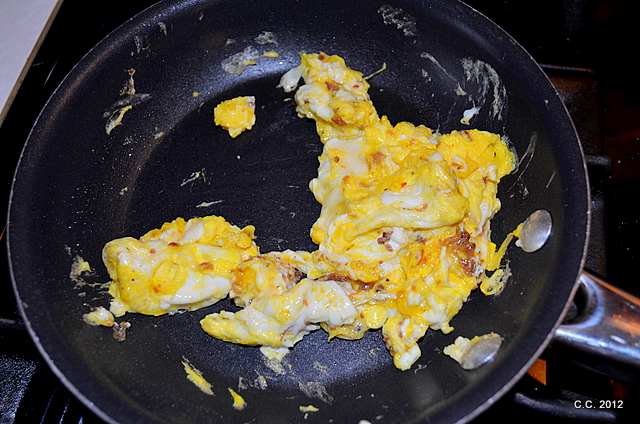 Toasted an English Muffin and then...
Reached for the lovely Puget Sound HONEY.
Let's see... Lime or Blackberry? 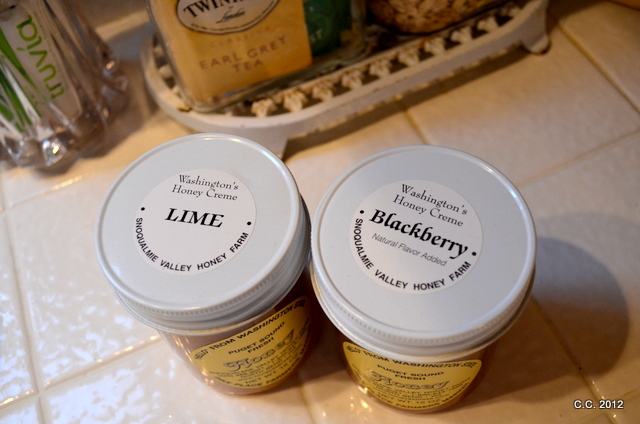 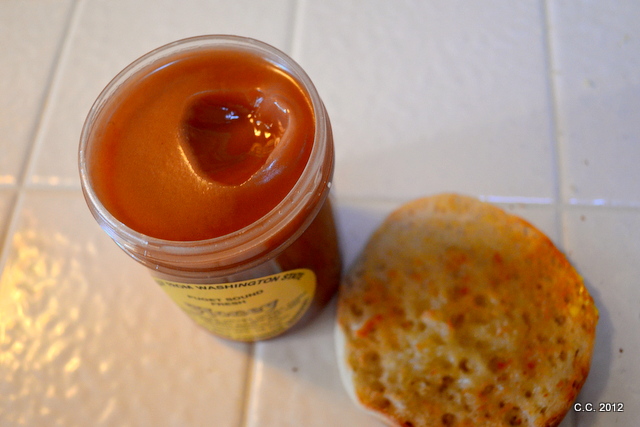 Oh the creamy goodness... the ease of use... the spreadability... GIANTS RULE!! 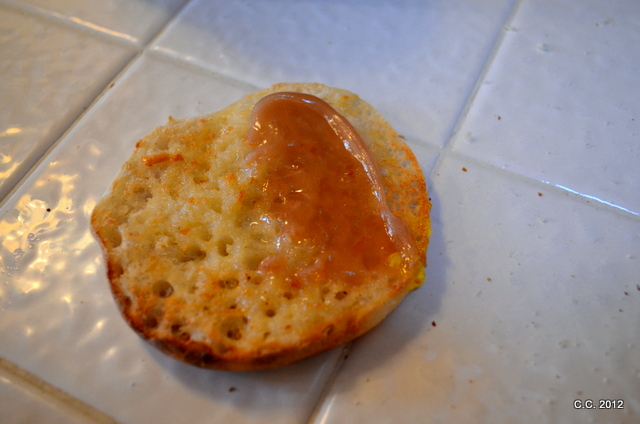 This is honey at its finest. GIANTS ARE THE BEST!! 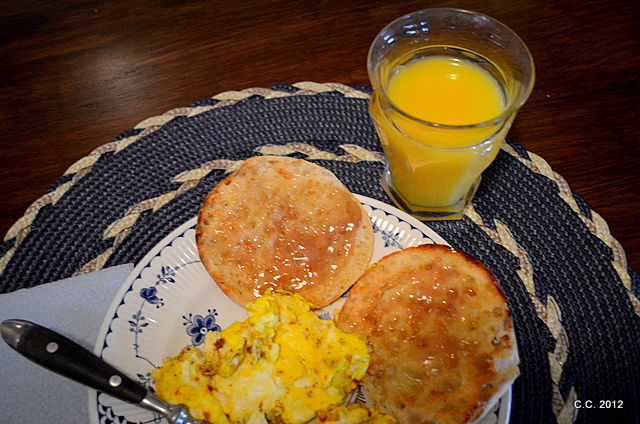 This is, absolutely, a breakfast for the gods (and goddesses).

I do sympathize with your loss, TIGERS. You played well.  You did all the right things... kind of. But.. WE WON
I have the honey to prove it. It's not Michigan honey. It's from the WEST COAST.
We are AWESOME GIANTS of the Pacific...Ha,ha,ha,ha, ha.... sorry. (I don't know where that came from.)
Thanks Dawn. When are you going to come back to California so we can root for the same team?

(Dawn was my friend in school when we were little girls, living in Pleasant Hill, CA. We lost each other for over forty years , but because of a friends blog post and a comment that my sister left on that post... Plus the fact that Dawn inquired about the names and a street in Gregory Gardens, we found each other again. Life is amazing. Wonderful things happen.)

Labels: a bet on the San Francisco Giants, breakfast with class, gift from a friend, honey from Washington state, Snoqualmie Valley Honey Farm