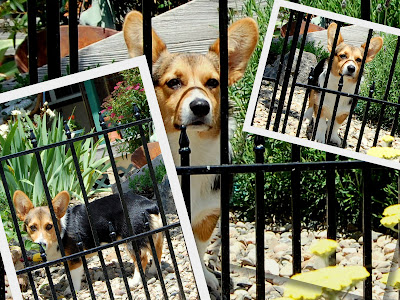 Cutter baby is doing just fine. He took his first big walk with us down the hill and back (well, half way down...). His area of operation is healing well and he has an older and wiser look about him. We are still keeping him in the pen a lot because he and Carl want to play roughhouse too much and get really carried away with the wrestling and tackling. So "Cutterbutt"( I love making nicknames for him) is on light duty for a few more days. Just wanted all of you to know that the baby dude is OK. 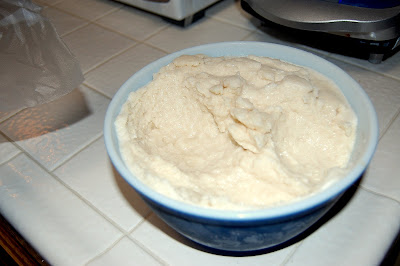 Guess what I made this weekend? GOAT MILK ICE CREAM. It's so easy it's mind boggling. I haven't gone to the goat farm for fresh goat milk yet. I don't want to until I get the cheese making supplies I sent away for. So, I went to the store and bought a quart of pasteurized goat milk and proceeded to make honey vanilla ice cream that, I believe, rivals Haagen Dazs Honey-Vanilla Bee ice cream. I think that's the name of it. This Haagen Dazs ice cream is and will be my friend C's very favorite "store bought".... until she tries my version. Yes, C., it's every bit as good as Haagen Dazs and is , if I figured the finances of it right, half the cost.
All you do is mix a quart of goats milk( I used regular, not low fat.) and a cup of honey and 2 tablespoons of vanilla extract together.
I don't have an ice cream maker, but you could use one. I poured the mixture into a 9x12 cake pan and covered it with some press and seal wrap and popped it into the freezer.
Every hour or so I would pulled it out and break it up with a fork and a potato masher until it was mixed well and then I would return it to the freezer. .., and by dinnertime we had the best ice cream ever. I think you could use less honey and vanilla. The combination of this amount was very strong... but delicious. I think I would try smaller amounts next time. Try these amounts first and decide for yourselves.
The next day I added some fresh strawberries mashed up and mixed into the ice cream. OMG! It's so good. 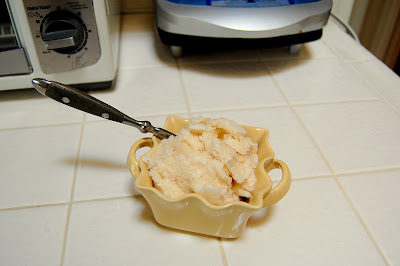 This is a small helping of the Goat Milk ice cream for you. Help yourself. Enjoy! Bon Appetit!!

P.S. Goat milk has an aftertaste that I really notice when I drink the milk by itself. I don't really care for this thick, residual taste.. but this ice cream doesn't.