Goodbye to a neighbor.

Some weeks seem longer and heavier than others don't they?  Part of this heaviness is that a neighbor has died. His name was Freddy.
I didn't know him really well. We weren't close friends... just neighbors. We would call him when his cows got out on the road. He always had a smile on his face and seemed eager to stop and talk. He was only 58 years old. He had lung damage from a job that he did years ago. The damage finally took its toll. He coughed all the time... but he wouldn't quit smoking. Our friend and neighbor, "D", who knew Freddy well, was always giving him a bad time about the smoking. I think Freddy had quit recently.
He lived at the beginning of our road near the highway. He and his father have the cows that I love to photograph. Freddy had been married and has children that are mostly grown and gone. The latest lady in his life love those cows... but recently move out. She still came and fed the cows for him. I would see her out there feeding them. I don't know why she left.
A few years back I was driving home from work past Freddy's house.  His father, his wife (then) and a neighbor were trying to help a cow give birth. I stopped and got out. Between the five of us, we delivered the calf ,which was breach and in trouble. With our help, the little calf made it. I will never forget the great feeling of accomplishment we all felt. We were all covered in gooey slime and blood, but we delivered that calf in one piece. The cow and her baby were just fine. I remember, then, how tired Freddy was. He was so exhausted he had to sit down and he was having trouble breathing. That was years ago.

The memorial was today at his house. His father seemed so sad and quiet. I guess he knew this was coming, but still... it has to be a terrible loss.

Like the tree that fell in last weeks storm... 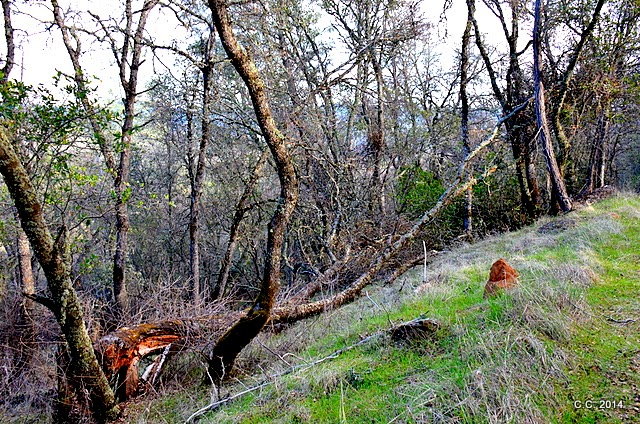 Freddy had a weakness inside... damage that couldn't be overcome. 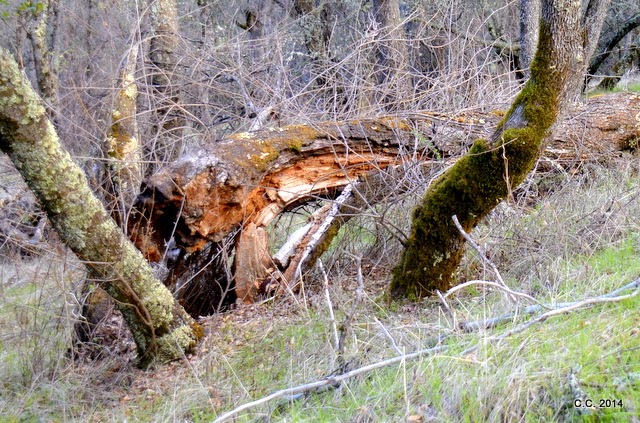 Life got him all tangled up, like the bare, poison oak branches around this old oak. So he said, "Enough".

Freddy...I hope you can walk without the pain, the oxygen tanks and the scariness of not being able to breath. I hope you are walking and dancing somewhere... and happy.
Posted by farmlady at 10:46 PM