Be careful what you wish for...

You know how we, here in California, have been doing rain dances and praying for rain? Well, somebody was listening. It's RAINING!!!
On Tuesday I drove to San Andreas. It was sunny, warm... I didn't need a sweater or a jacket. We commented that it was "scary" how nice the weather was... for February.
Later, on my way back up my dirt road to my house, I stopped to take a picture of a California Alligator lizard. He was sunning himself on the warm dirt and didn't move.

At first I thought "Snake!"... because of the long tail, but it was just a small lizard and he wasn't moving.

I think he was as curious about me as I was about him. They are such interesting creatures. 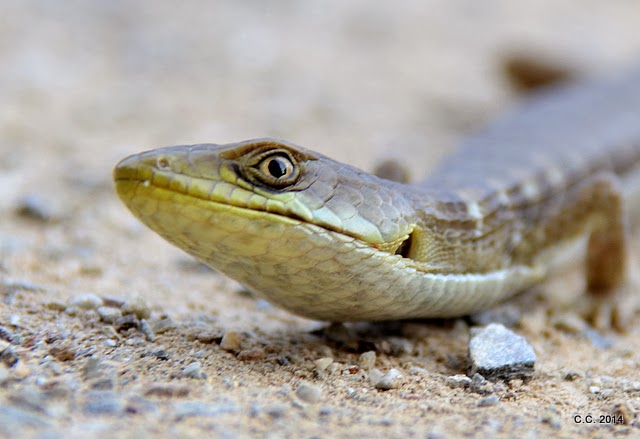 I finally touched his tail and he ran off into the grass.
Tuesday night it rained hard. We had lightening and thunder. It woke us up. Carl and Cutter were whining. I had to talk to them and tell them that everything was OK. Finally, we all went back to sleep.
Wednesday it rained and during an afternoon break in the weather... I took a walk up to the top of the property. 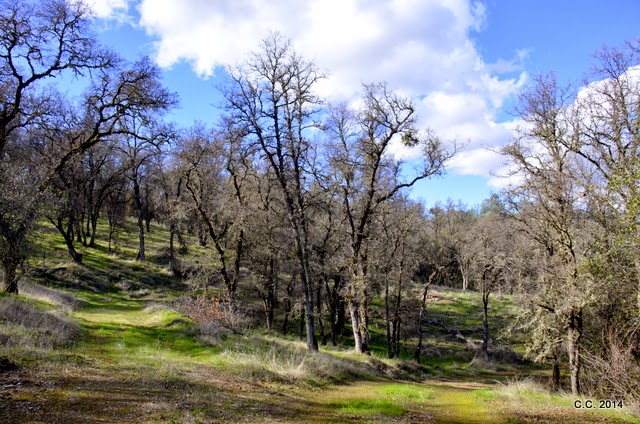 I walked over to the old mine where I found the creek dry in one spot ,(where I cross it) but filled with water in another. This small creek had water that was doing a disappearing act, and then reappearing below the crossing. 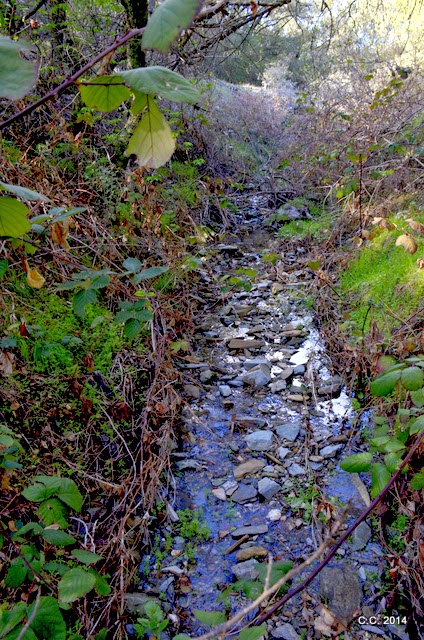 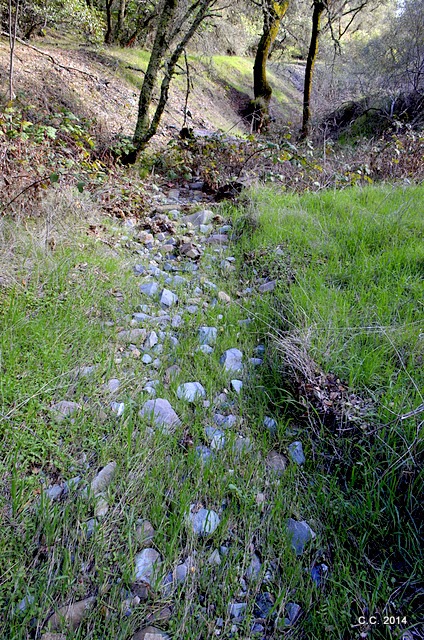 It must go underground on bedrock, because the water appears again further down the creek. The rain wasn't sufficient to make the creek flow all the way downstream. A few more days of rain and the whole stream will be filled.
On Thursday it rained all day. I finished my first knitted slipper and started another one. It seems that you have to make two of them.
Right now the finished one looks like a small, fuzzy alligator... 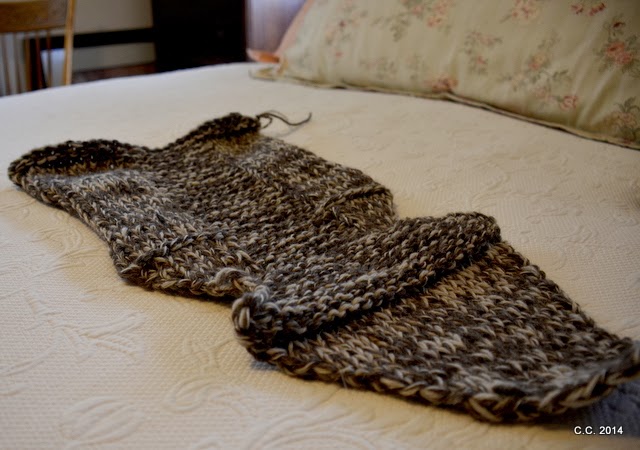 ... but when I sew it together, put fringe on it and felt it, this oversized attempt at thinking I know what I'm doing should turn into a cute little felted, fringed slipper. This will definitely be a feat of magical proportions. "Abracadabra." These will be felted on a retreat in Nevada next weekend.

It didn't rain too much last night but the wind blew hard. This morning  I was up early because I had to drive down to Sacramento for an appointment. Our neighbor called and said that he had been heading to work and couldn't make it to the highway because there was a huge pine tree that fell across the road.
He said he would go the other direction, across the bridge and into Calaveras County. The Prospector called the county and told them about the tree. They said they would be right out. We were the first to call about a road problem so they were ready and waiting.
I left early and drove south to the river.
It wasn't raining.

I was on a schedule. I had to add at least 25 minutes to my travel time because of the downed tree. I would drive south and come back on highway 49 into Jackson and then do my normal drive to Sacramento. When you are on a schedule... and have an appointment... it's kind of like working for a living again. I knew that I couldn't stop for any reason or I wouldn't make it in time.
Well, guess what I saw down at the river... when I couldn't stop... even though I had my camera with me? A beautiful Red Tailed Hawk was sitting in a dead oak tree. It was close to the road and I would have been able to get some really good shots of him.  And, then, further down the road, I saw something move. The elusive GREAT BLUE HERON that a photographer friend has seen at the bridge a while back, flew up from the side of the road and spread its amazing wings... right in front of me.  I almost had a heart attack.
(I could not stop. I was probably going to be late , as it was.)
I almost cried. Finally, this beautiful bird shows up and I'm in such a hurry I can't even stop and capture its image in my camera.
As I drove along the ridge down the river canyon and into Jackson it started to rain... again.
I turned the news on and listened to the reports of Southern California flooding and felt almost guilty about all the rain dances I did for two months... all the hoping and wishing for rain.
There seems to be no middle ground this winter. Everything is extreme.Whether it is cold and snowy east of the Rockies or rain in the Northwest and now here, were are definitely having a strange winter. Here, in the west, it seems to be either  feast or  famine. There's no in between. We are still in a drought and it's flooding all over the place. There are mudslides in S. Ca.  The mud is sliding down all the hills that were burned in the fires this summer. It's awful.

I drove down to Sacramento and back. I made my appointment with five minutes to spare. On my way back home I stopped at Starbucks for coffee and one of their great egg salad sandwiches. The sandwich was wrapped in cellophane and tucked into a cute little box. When I opened it, there was a piece of tape holding the wrapping around the sandwich. 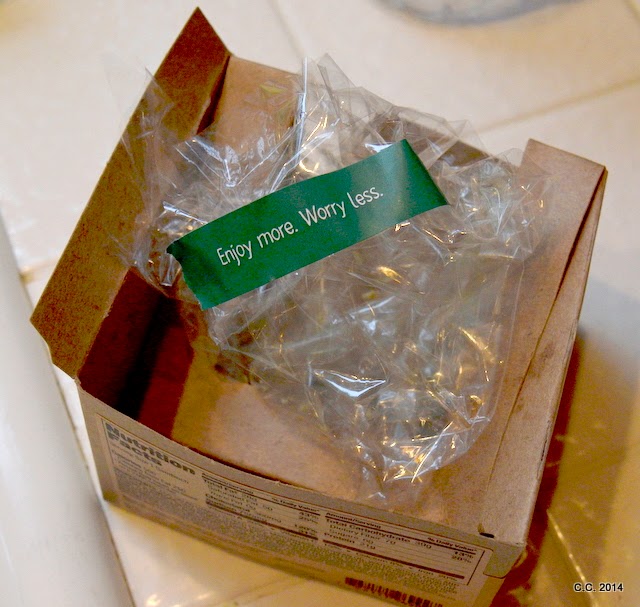 Enjoy more. Worry less.
So, I enjoyed my sandwich... and the coffee was strong, hot and wonderful.

I guess I will take a walk in the rain tomorrow... and enjoy this wet stuff that we so badly need.
Maybe it won't rain and I can still take a walk.
Maybe I will worry less about what the doctor told me today and try not to anticipate disaster.
It's wasn't anything horrible. He just wants to "explored" a different path... a direction I didn't expect.
Life is like that. Some days it rains and some days the sun shines.
Sometimes you don't get the photo of the Great Blue Heron that you wanted, but maybe it will be there tomorrow.
Sometimes you have to take a detour because of a "tree" that fell in your path.
and sometimes... you just have to hope that an unexpected "mudslide" doesn't come down the hill behind you and wipe out all of your well laid plans.

It's still raining outside.
I wonder what will happen tomorrow.
Oh,yes... my sister is coming up.
It's suppose to be a "non" rain day.
But don't count on it.
Crazy weather... maybe we'll have a tornado.
Don't worry Farmlady... Be happy.

Labels: Foot problems that never go away, lizards, Rain, trying to make sense of everything, weather