One year ago today was the fire that almost took our house, animals and everything with it. 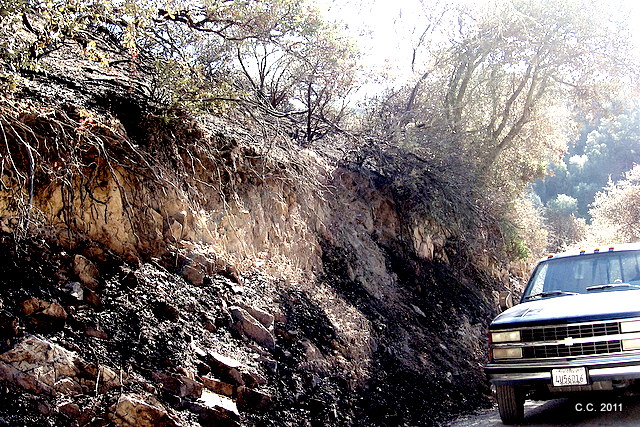 A bewildering anniversary that still makes us nervous and jumpy.
The memories of the drive back up to our house and the wonderful firemen who saved everything. 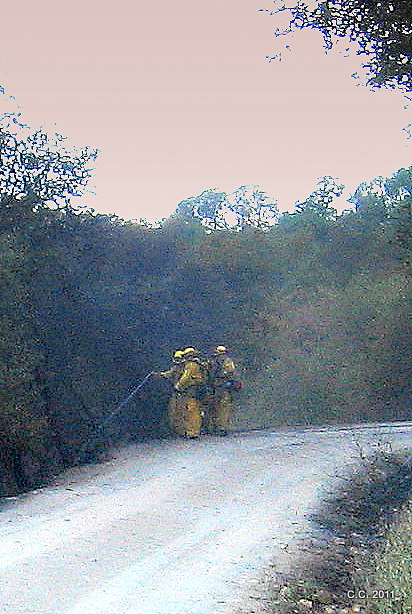 The oddly beautiful color of the spot fires that kept appearing for days after... 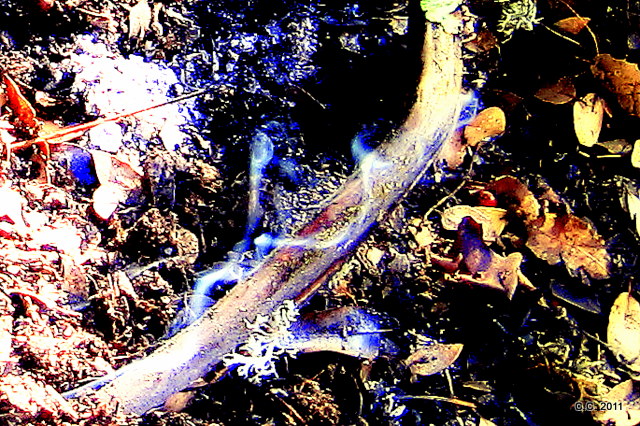 And how we would hike down below the house with buckets of water to douse the never ending branches and logs that continued to burn.
We would see smoke. 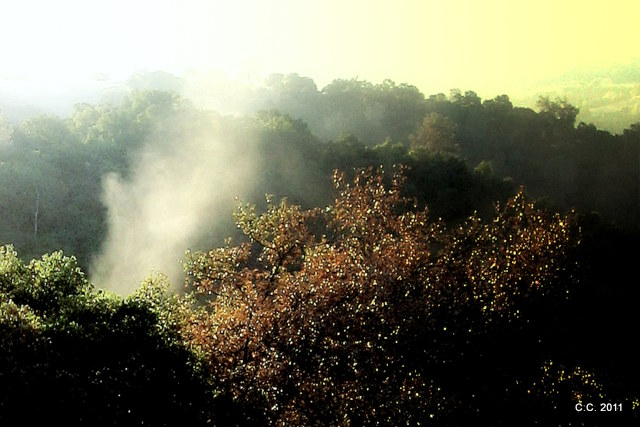 And rush to extinguish a small branch that continued to burn, as if it were alive and determined to find more... to reach our home... to destroy everything.
Finally all the fires were gone, but not the memories. I will always remember that day and having to run, leaving everything because there was no time... only escape... only a road to the top of the mountain, two corgis and so much fear.
A year has gone by and today we waited, and listened, and relived the fire. This evening we are still lifting our faces into the hot evening air for that smell of smoke... but it is not there... It's not there.


So we walked early this morning, the Prospector and I. We drove down to the main road, the river road. It was beautiful and amazingly cool in contrast to the hot afternoons. I forget how different it is to walk on the old river road. We don't have to worry about snakes in the grass. 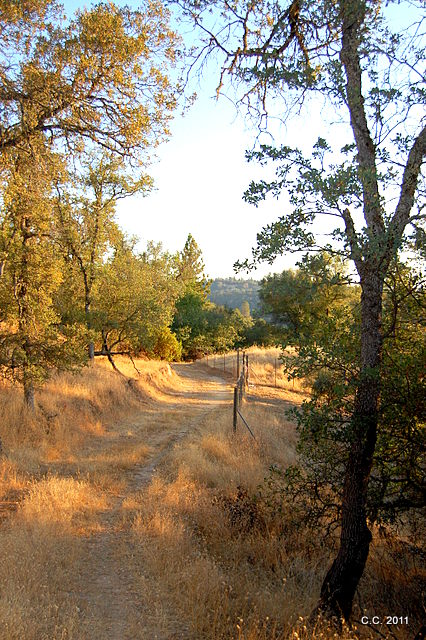 As lovely as the dirt road above the house is, it's all about watching your every step and listening for certain sounds... being prepared at all times and being aware of any movement in the grass. But, the main river road is safe and we can see the rattlers coming.
Yesterday morning I did hike up to the well on my own walk. The Prospector had a small "encounter" the day before. He was putting a piece of plywood up on the west side of the well house to block the afternoon sun. The heat has been intense enough to do some damage to the exposed parts of the pump so he wanted to block the sun on one side. He was on a ladder and started hammering when he looked up and realized that the paper wasps had multiple nests under the eaves. 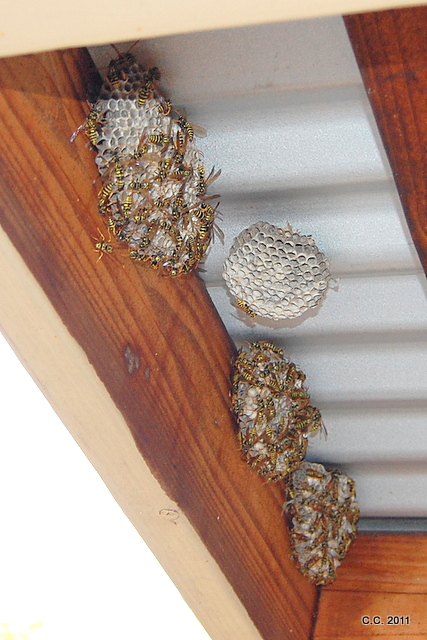 This is a scary proposition for my husband because he is allergic to bee stings. I would imagine that the whole scene of his retreat from the ladder and the dance he must have done to escape the wasps would have made a good You tube video but, luckily, he still has a good amount of agility (for an old dude) and he move away fast enough not to get stung by these rather defensive and aggressive bees. He did not , thankfully, get stung.
When I took these photos the morning after his encounter, it was cool. They didn't seems to be bothered by my presence. I was at a distance though. I have cropped these photos to show them much closer than I really was. 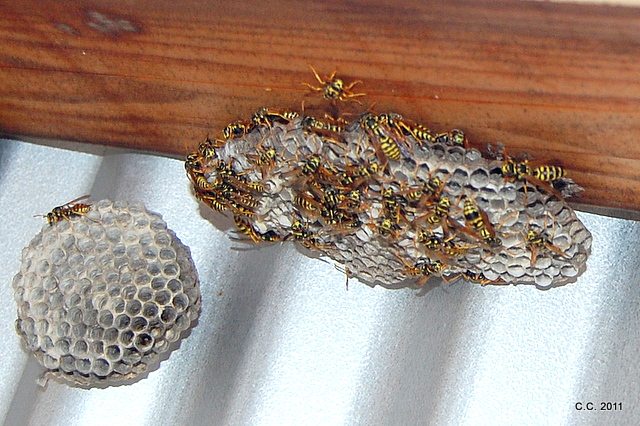 They were very busy and they were building a new nest (on the left). It's really quite amazing. 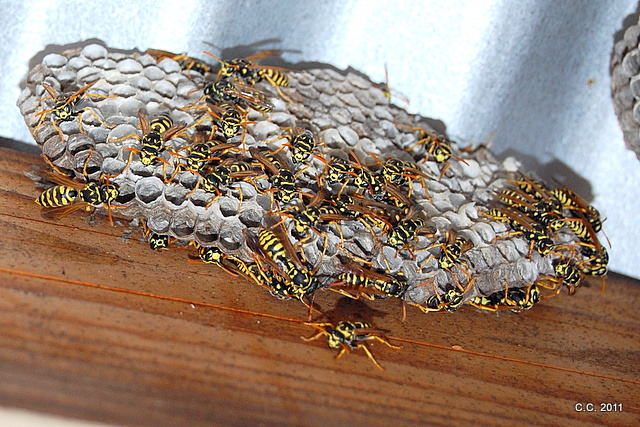 I think THAT ONE on the wood was watching me. It could have given a signal at any minute and I would have been toast... but for some reason it didn't. Maybe this small insect sensed my love for "all creatures, great and small" HA!
They didn't seem very interested in what I was doing... except for THAT ONE on the 2X4. I think he must have been the "guard" wasp. I know he was watching me. 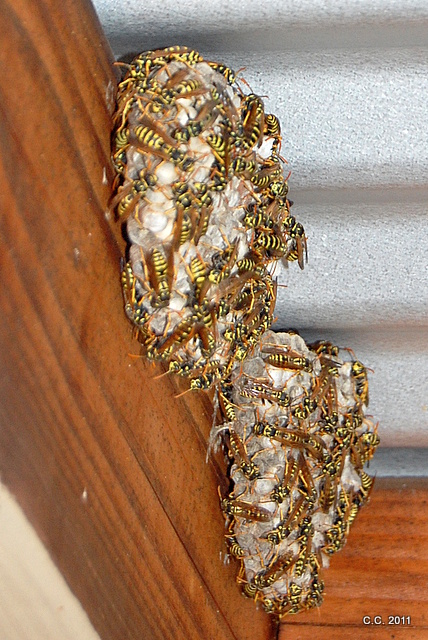 I finally decided not to tempt fate any longer and stopped taking pictures.
I got stung the other day, in the garden. It was early and I was watering. I felt something crawling on me and I reached around with my hand to brush whatever it was off. It didn't like being touched and it stung me. . There is nothing like a wasp sting. They are intense.  I went into the kitchen and got an ice cube. That helped. Then I made a paste of baking soda and water. I packed that on the sting and the pain went away. This works well. I'm not allergic to bee stings, so this usually does the trick.
The prettiest thing about "morning" walks is the color. This is called "tombstone" rock here in the foothills. 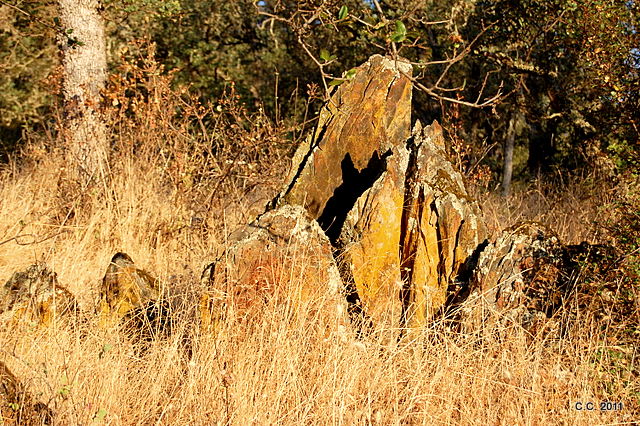 Tombstone rock is metamorphosed volcanic rock that crops out in isolated slabs in the gold country. It is the product of undersea volcanoes 140 million years ago, now upended and changed by upward  mountain movement.
A field of these slabs reminded early miners of a cemetery so they called the rocks "tombstone " rocks or "gravestone" slate. These rocks are very common in this area. Generally they are more gray in color but early in the morning when the sun comes up they are the lost gold of Amador County.
In the afternoon, yesterday, the temperature was 101 degrees on the front porch. 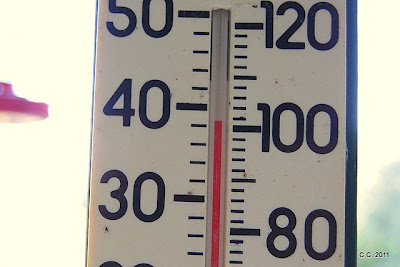 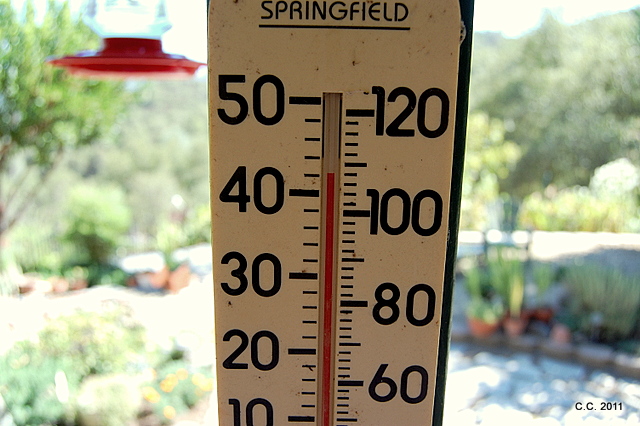 Yes, folks. That says 108. You can hardly breath out there.
The tomatoes, the flowers and the pumpkins don't seem to mind this horrible heat. As long as we water them, they seem very happy. This is one of the etched pumpkins down in the vegetable garden. 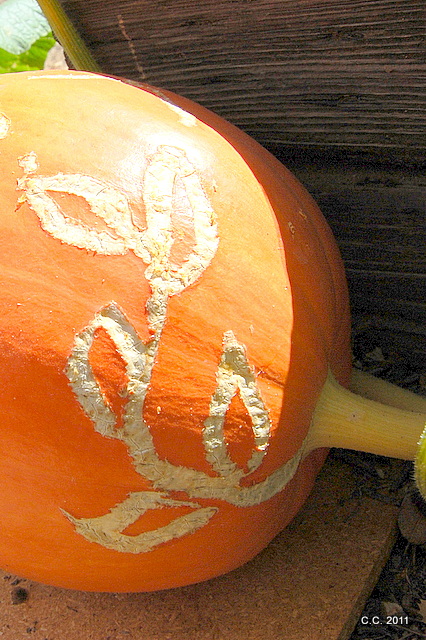 They are getting huge. They love summer. I'm trying to be a happy pumpkin... but I'm not.