It was Saturday morning.  Time for my cup of coffee. But first... I had to make it.
Never having used a French Press to make coffee, especially in the morning when I'm kind of handicapped anyway, the whole process seemed daunting. Our hostess had explained how to use it on Friday night before we went to bed. It sounded simple. Kind of like my grandmother use to make it. You throw the grounds in the bottom of the glass container, pour the water in and let it sit for three minutes, then you press the top down slowly and "Voila.", you have coffee.
When I asked her how she got the coffee hot, she started laughing and said that she forgot the "boil the water, first" part. Simple mistake.
I thought that I would have to heat it up in the microwave after I made it. Either that or the French must drink their coffee cold... which I doubted.
I had seen a french press before but I honestly had never used one. I'm embarrassed to admit this. I like to think of myself as rather cosmopolitan, but I really had not, in my lifetime, learned or attempted this way of making coffee.  "J" was up early. She was waiting for me in the kitchen. She even boiled the water for me.
I think she was concerned that she didn't have enough insurance to cover my lack of french press skills so she kept an eye on me until the coffee was finished. She knew I loved coffee. She knew that I would drive clear into Carson City to get a STARBUCKS if I didn't figure this whole thing out. She was very patient and understanding with me.
I'm here to say, proudly, that you really can teach an old dog a new trick. But, I could have used an instant pre-cup of coffee before I started doing the French Press that morning (Sounds like exercise doesn't it?). Coffee would have made my brain a bit sharper.
The other coffee drinker, Jan, said it was OK. She didn't get all excited about it... but she was polite... and she drank it.
Finally I poured and drank my first cup of coffee which, by the way, must not have settled properly in the french press maker, (another faux pas?) because it had some grounds in it.
Is this the way the French really do this? I don't get it. Why not just use a filter? Or, like my grandmother use to do... throw some egg shells into the coffee and they make the grounds settle at the bottom.
Maybe I poured it too fast. I don't know. It's all a mystery to me. Like smart phones and having to use three different remotes to play a DVD movie on my TV.
The coffee was really good... strong... and hot. As I got to the bottom of the cup, I was careful not to drink the sediment. They say you can read fortunes in the bottom of a cup of coffee. Mine would probably have read...'She will always be confused by new skills.' or  'Farmlady is not French.' There was another garage... and another road. These beautiful homes had more to them than met the eye from the front. 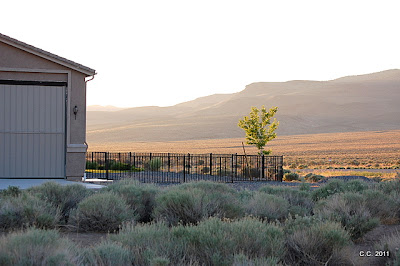 The sun was coming up and I walked out across the blacktop and into the sagebrush. It was so beautiful out there. But the back of these homes looked like an unfinished version of the fronts... and the garages were twice as big as the front garages.  This garage, below, is "J"s garage... only it's not for cars. 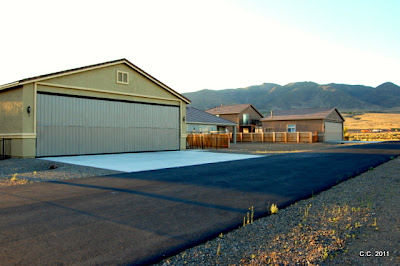 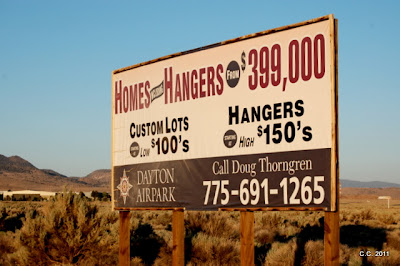 And the whole street of homes has its own AIRPORT. Imagine that! You can commute from anywhere, fly home and park your airplane in your own hanger. WOW!
"J" and her husband made an airplane from a kit. She showed us a picture of it. It's beautiful. It's not a little glider type, light weight plane. It's a two seat beauty that they have flown clear to Alaska... and back. The plane wasn't in its hanger this weekend because it was in California with "J"s husband, so we didn't get to see it in person.
Last year, they met some friends at a plane show and decided to buy a house here. Now they can fly from Jackson, CA. to Dayton, NV. in no time. They are in a community of people who love planes and because of the down real estate market they bought this place for a song.  I didn't know about places like this. I guess I've been in the mountains too long. 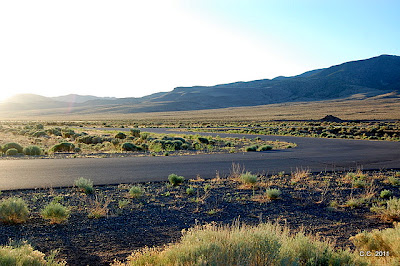 They taxi out onto the runway and off they go.

It seems really exciting to me. No customs, no baggage checks, and you are in complete control. You are an eagle in the wind.
So I, being bound to the earth, walked though the sage brush taking pictures and thinking about what it would be like to fly. How I had written a poem, once, about flying. I will have to find it and read it to all of you.
Many years ago, in high school, I worked at an airport and the instructors would take us up after work. There was nothing like the exhilarating feeling of taking off in a small plane and flying over our world. We would fly out to the San Francisco Bay and the sun would be setting into the Pacific Ocean. It was breathtaking. We did Parabolic curves and watched a pencil in my hand lift up and come back down again as we did this maneuver.
I think I understand this love of flying. I don't like flying in a commercial airplane, but the concept of flight and being in that small plane was a delightful experience and I appreciate these folks that live here because they have followed their dream and learned to fly. They have learned to make coffee in a french press and they know which clouds they can fly through and which ones they can't. That's pretty cool.
I will leave you with some photos of the high desert and the early morning sunlight.
Watch out for Jack Rabbits and Rattlesnakes. 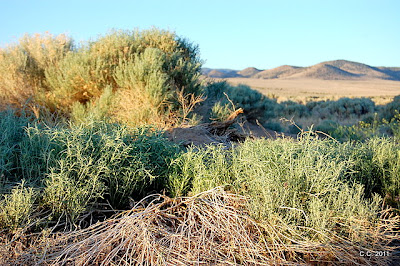 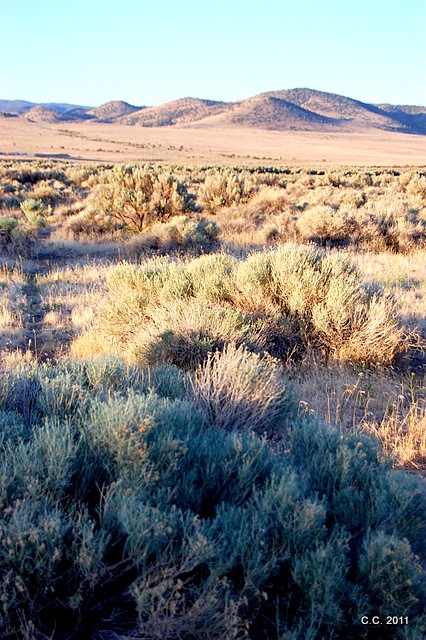 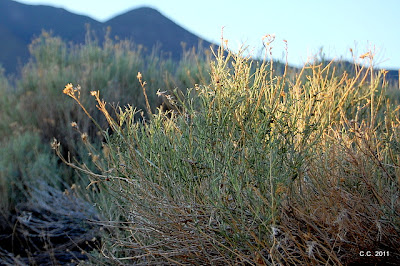 Tomorrow I will round up the story of my get away with a trip to Genoa, a small town west of Minden.
It was so good to get away from a week filled with sorrow over losing Murphy, our goat. I was able to look at his leaving from a different perspective and laugh a little with friends. It was a good trip.