We have a new auction house in town. They auction just about anything you can imagine. 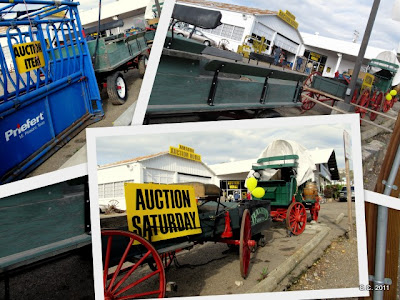 Saturday morning The Prospector and I decided to go and see what they do and how they do it. What a good time we had.
The Amador Auction House  is a well organized, interesting place. It's in the old Prospect Motors building coming into town across from the park and library. I didn't think they would ever use this old car lot for anything worthwhile again... but they have.

We Got our "number" and then, because we came a little early, we got to preview the items that were going to be auctioned off.
There were books and old boxes. 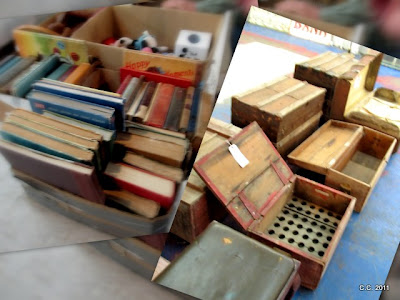 There were all kinds of old bottles and lanterns. 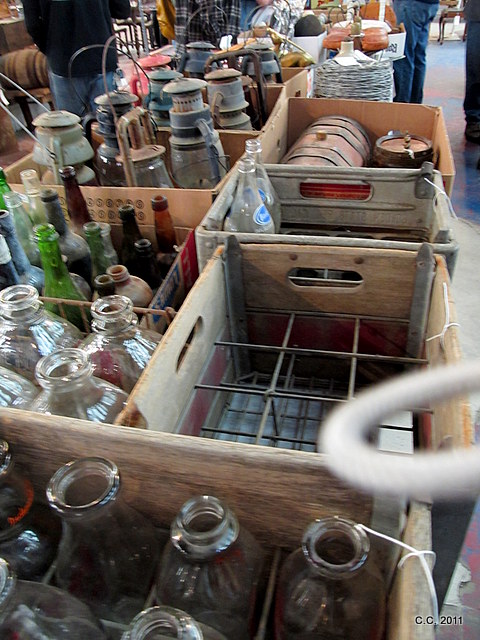 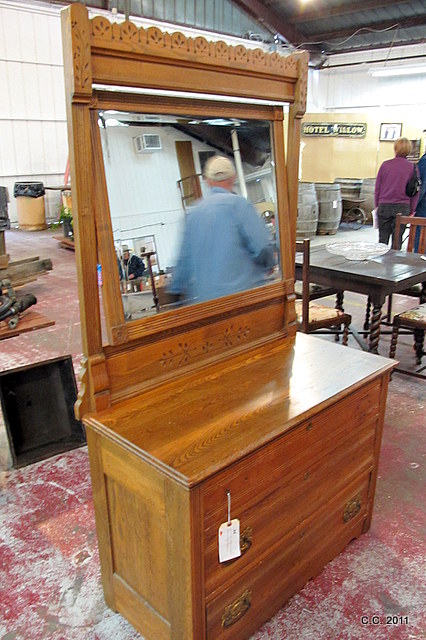 And signs of every kind. 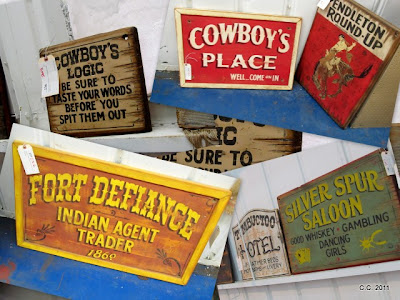 There was a lot of mining equipment...
Some of the artifacts were old and antique... some not so old and from the "gold" tourist industry... but all gorgeous items.
I loved the mining carts. They even had the track underneath them. That's how they got these very heavy carts down into the mines. Track is very hard to find now. 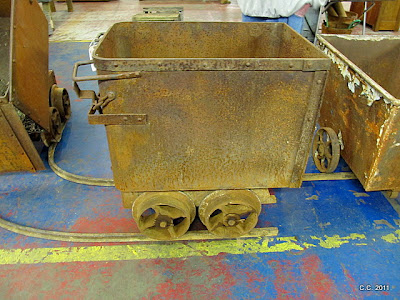 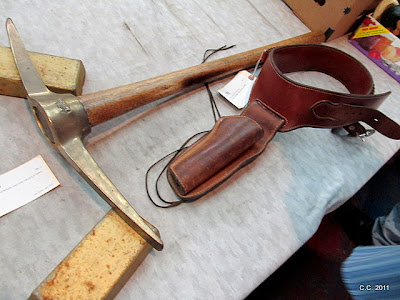 There were heaters, old milk cans and fire extinguishers. 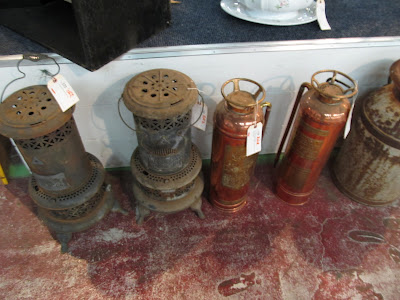 You can decide what you are willing to pay for something you really want... ahead of time. The preview lets you take a look at all the items, write down the number of the item and drool all over yourself. Like the wonderful old school desk that was talking to me from the minute I walked across the room. 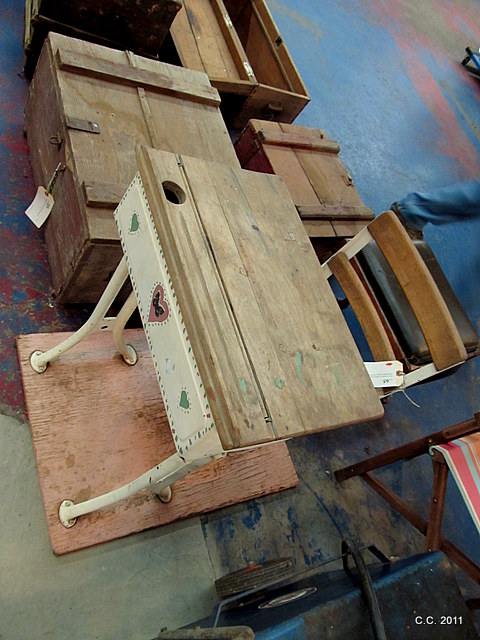 But the desk wasn't what we came for. We were looking for old mining artifacts or something that we could use as a planter.
The auction started and what excitement it was. A noisy, fast paced process of bidding, shouting and confirmation of sale.
I bid on a box of books but someone else wanted them more than I did. I started the bidding on some of the wonderful signs ,but that Fort Defiance sign (in the fifth photo) ended up being sold for $100. I loved the signs and wanted one but I was unwilling to pay the price.
Then we focused on an old water trough that had a couple of gold signs attached. The bidding started at $25.
We went back and forth with one other person and finally.... WE won the bid.
The old trough was ours.
Oh Joy!

They had a lunch break and some entertainment.
Calamity Jane was causing all kind of trouble as she kicked a chair over and accused one of the men at the poker table of cheating. 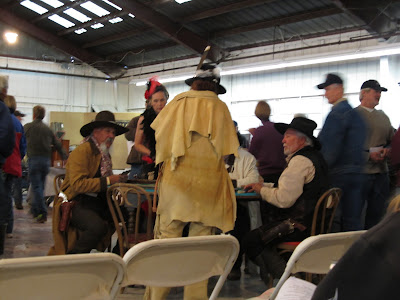 Our local thespians were giving us a good show and everyone had a great time.
I drove home in a raging wind and rain storm, around lunchtime, worried about the dogs. The Prospector stayed to see the rest of the auction... and the entertainment.
Yesterday, the Prospector drove the truck downtown and picked up our "water trough" planter..
We are delighted with it.
Here it is next to the garage. 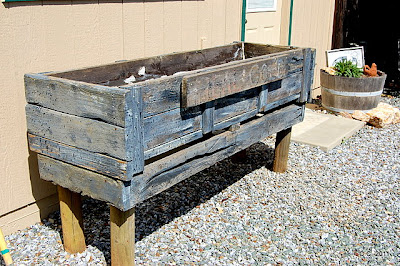 It came in two pieces. The legs and frame are separate from the box. There is a sign on the front that says 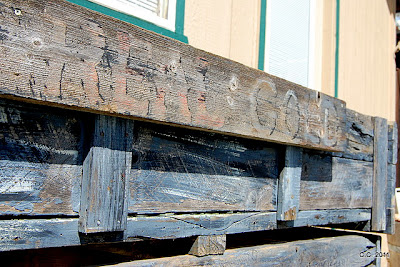 "REAL GOLD" and one on the end that I forgot to take a "before" picture of.  The Prospector unscrewed them from the front and side of the trough so I could paint them. I have redone them with acrylics and today I gave them a coat of Urethane.
We lined the box with a metal liner and filled it with dirt. Now I can filled it with all kind of beautiful flowers for summer.
The signs turned out nice. It was fun to work on them. The old outlines of the words were there so I just redid what had already been there before.
The sign above ended up looking like this... 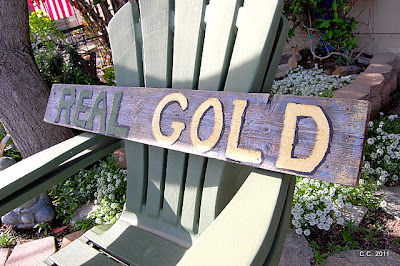 And the smaller sign that will be put on the end facing the driveway looks like this... 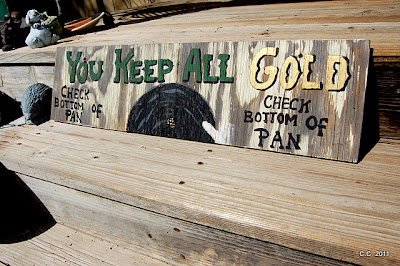 I think that this trough was used for a panning tough in a state park like Columbia, CA. to teach tourist how to pan for gold... but, for the rest of its life it will be holding flowers.
The auction was really a lot of fun, even though I didn't stay for the whole day. I wanted to bid on so many things but you have to stay focused and you really have to stay within your budget.
Some items went for a lot more than I thought they were worth. But, what is the worth of something when you really want it? I guess only the person who bids on that wonderful thing that "has their name on it" knows what it's REAL worth is.
But we are so happy with our new planter and the experience was really great.
The storm brought us a wild auction day and a rainbow at the end.
This seemed like a happy day to us.
******************

Guess who called me last night? THE BEAN.
My grandson called to thank us for the birthday present and we talked for quite a while.
He says that I need an IPad so I can learn to play games better and practice more.
He says that the IPad would be a better choice than an IPhone. It's bigger and "Is more fun."
So, I have it on the best authority, that I need to invest in another form of electronics to improve my life and "play games better." He proceeded to tell me how to play a specific game which I didn't understand at all, but he was being very patience with me. After all, I'm his Noni. and he knows how easily I can "drop my transmission" over these games.
He's seven. He knows everything about computer generated games and programs and "apps".
I just love listening to him tell me how to do things.
He is such a smart little boy and he is so full of knowledge about the things that are important to him.
I'm still not sure how to play these games but I sure like the idea of carrying the Internet around in my purse.
IPhone? IPad? IPhone? IPad? Kindle? Laptop? Oh my gosh!  I know they all have different uses but I'm so confused . I will have to have another discussion about this with the Bean, before I buy something. He'll probably be eight by the time I buy anything. He'll be even smarter by then.
His brother talked to me too. Little Bean is fine. He was watching TV at the same time so I only got bits and pieces of a conversation.... but, he's fine.
Then I got to talk to my son.
I love it when they call.
Posted by farmlady at 9:50 PM

Labels: Amador Auction House, Bidding at an auction, CA., Jackson, making a planter out of an old trough, mining equipment