I really do. They were looked forward to like a short vacation when I was working... like a third day of relaxation... a wonderful reprieve from the alarm clock and getting up at the ungodly hour of 5:30 in the morning. I loved that extra day. It was like a gift from God... my employer, the school district.

Now I forget what day it is.
I don't really forget. I just don't have to know. It's one of the joys of retirement.
This is how my Monday went....
I felt so much better when I woke up this morning. I still have trouble at night with the stuffy nose, can't sleep, find the Kleenex, blow your nose, take some more medicine, think about sleeping in the recliner and looking like what my father use to call "death warmed over", but I'm feeling better today. It's incremental but I know that I'm not getting worse.
So, this morning after breakfast I let the dogs out and decided that I'd had enough of being cooped up and I went out with them. I opened the gate and let them go into the back area that they love so much. They disappeared quickly. I would see flashed of fur every once in a while as they ran around the yard. 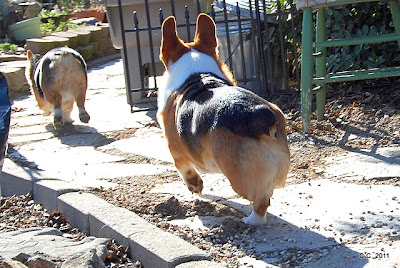 Cutter came back a little while later looking kind of funny. 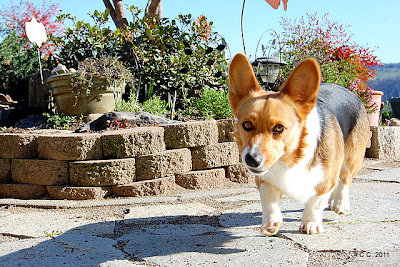 I said, " Cutter, what's the matter?"  He looked at me and ran back down the hill behind the potting shed.
I didn't know until later that he had rolled in something awful. Not awful to him of course... but something that he found delightful and irresistible.
Oh, the joys of dog ownership. Why is it that they can't seem to resist something so putrid... so foul?
What is it that makes them want to rub their faces in feces.  This is what separates man from dog.
Carl seemed concerned... 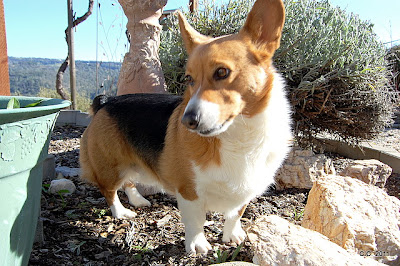 He kept watching Cutter and standing next to me. I guess he thought Cutter was in trouble.
I left them to run some more and started taking pictures of...
The flowering quince that we thought we had killed when we built the potting shed . 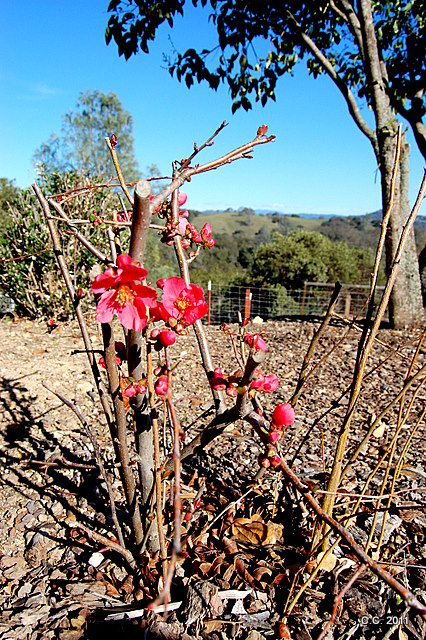 Elizabeth Taylor (the rose)  just starting to get new leaves on her pruned branches. 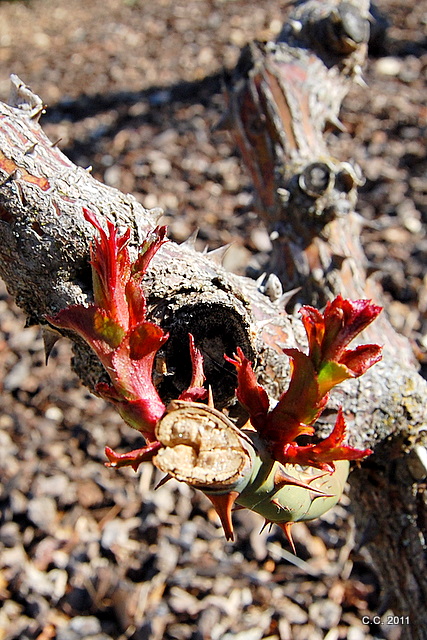 and my pansies seem to have survived the winter. Not hard to do in this mild winter we're having. 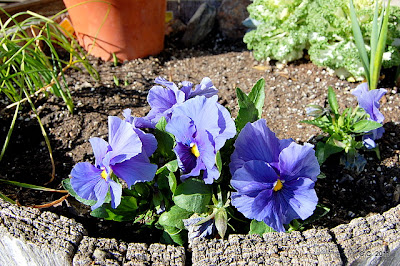 The Daffodils are blooming everywhere.
Beautiful flowers, laughing in the winter sun... 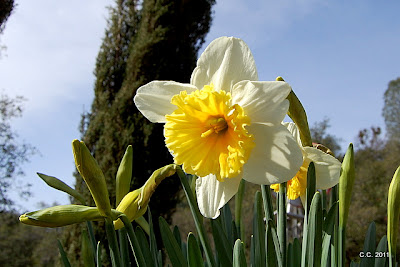 and reminding me that Spring is coming early this year. 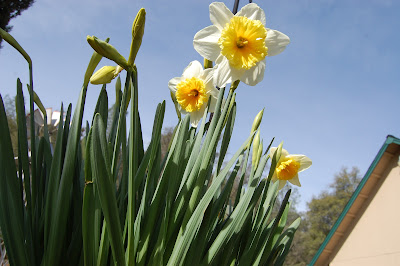 I sat on the porch and let the sun soak into me. Letting my body accept  all the warmth and vitamin D that it could. I was pulling the heat of the sun into my pores, surrounding my sickly invaders like an army of good. I was really into the Creative Visualization that has always worked to take sickness out of my body...
when I caught this smell... right in the middle of my focused concentration.

Cutter was standing there, next to me, on the porch.
I looked down at him and said, "Dog, you stink."
He just looked at me and then he was off again to run with Carl.
I lost the moment. Lost the wonderful image of getting well and ridding myself of this cold.
I decided that I needed something constructive to do that wasn't going to overtax my brain so I made some cookies. 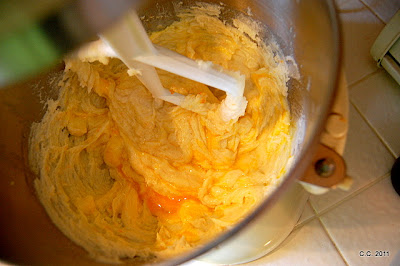 Snickerdoodles with orange zest. Lot's of orange zest and some of my chicken's free range eggs. Look at the dough! That beautiful dough is like the sunshine outside... like the Daffodils... Bright! Yellow! Blending into my body... making me well. Making me feel good... oh,yes! good, healthy and ...
What is that smell?    Who let Cutter in?
Cutter was at my feet again and his fragrance was wafting up and spilling onto the kitchen floor.
"Oh, Cutter!! You are going to get a bath, little boy."
I asked the Prospector to try and wipe Cutter off with a washcloth. He did and it helped, a little.
I finished the dough. 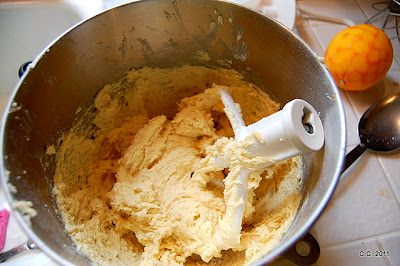 Made the cookies and then...
I fixed myself a cup of tea and sat down for a while. 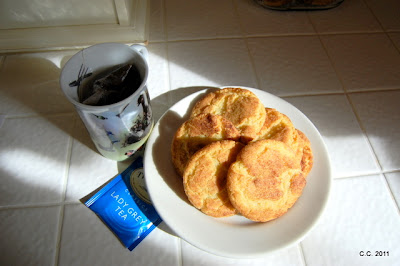 I love Lady Grey Tea. It was just the pick me up that I needed to accompany the Snickerdoodles. I only had two cookies. Honestly... well... and some cookie dough.  Does cookie dough count? I thought cookie dough didn't have calories because it isn't cooked. Isn't this true. I'm sure I read it somewhere.
We wiped Cutter down with a soapy wash cloth twice today. It is helping, but we may still have to give him a bath tomorrow. I have no idea what he got into, but I know that the foxes still come into the yard at night and Annibel, our cat, is always out there. I don't know who's poop it was but Cutter found it too good to pass up.  Rolling in any alternative poop when it's there on the ground, is like humans eating cookie dough. Irresistible! You just have to have some.
That was an awful analogy, wasn't it?
Carl never does this.  It's somehow beneath him.

When I let Cutter outside tonight he didn't want to come back in. I had to lure him with a biscuit.
He has had a bad day and when he thinks that he is in trouble or thinks that he's done something wrong, he gets panicky.
Getting two rubdowns with a soapy washcloth goes against a Corgi's self-important " I'm in control of my life." attitude.
He's not happy. He came inside tonight and went directly to his crate. He wanted to go to bed.
I guess Scarlett was right.Tomorrow is another day...