Did you notice the snow?

LOOK! I have beautiful, glorious SNOW on my blog page. Wait... you'll see it.
It's coming. Look at the pictures. There. Do you see it?
It's very easy to do. ( Google "snow effects for blogs")
A few years back I was crying about not having snow in this part of California and whining about it on my blog post. A friend named Jo who lives were it snows all winter, decided to give me a gift of snow and showed me how to make it appear on my blog . I was so thankful I could have kissed her. I got a Christmas card from her yesterday and it reminded me of the simple gifts that we can give one another. Thanks for the card Jo. Hope you and JD have a wonderful holiday.Thanks too for the gift of snow that you so kindly gave this California girl. I will never forget the delight of it.
**************************
So, night before last the Prospector and I heard someone coming up our road. Now, we don't have people driving up our steep, dirt road after dark. They take their life in their hands. It's just not a smart thing to do. But, we have learned that the UPS folks keep very odd hours and that's who arrived.
He said that he was having a long,exhausting day and had been from one end of the county to the other. We talked for a few minutes and I was going to offer something warm to drink but he left as abruptly as he came... on Dasher, on Prancer, on Comet and Vixen... to another place, to another house in the middle of nowhere.
What he brought was a birthday present... for me. I told you I was going to extend this one out as long as I could and everything seems to be working in my favor.
Yes, it was a gift from my friend in Michigan. She told me something was coming. She loves suspense.
But... this was not just "something". This was TORRONE. 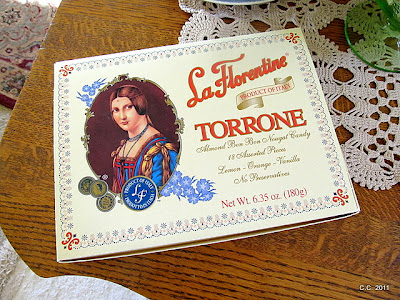 The flood of memories that this box brings are overwhelming and I will tell you why.
When I was a little girl we lived in Pleasant Hill, California. We lived in one of the first suburbs built in the 50's. It was a wonderful place to grow up.
My mother and father grew up in Napa, CA. and still had lots of relatives living there. The trip to Napa was long but we went often. I spent many summers up there and was very attached to my Mom's side of the family. It was a big family and Italian.
My great grandmother and grandfather had come from Italy and they bought a prune ranch in the late 1800's on Silverado Trail. It was a beautiful ranch and my favorite place to be in all the world besides my own home.
After my Mom and Dad moved to Pleasant Hill, Mom's family didn't come down to see us very much. It was hard to leave the ranch.  So once, sometimes twice a year they would call and say they were coming. They would arrive and spend the afternoon. Usually, my  great Uncle Jim (who was like a grandfather to me because my grandfather died before I was born) and my Grandmother (his sister) and my great Aunt Bina would come down together. I would run home from school knowing that they would be there. I can still feel the excitement.
If it was a summer visit, they would bring fresh vegetables and eggs. But if it was just before Christmas, they would arrive with dried fruit, nuts and a big box of La Florentine Torrone. Oh, how I loved the Torrone.

Inside the big flat box are lots of little boxes. 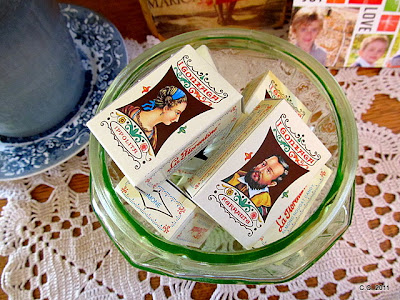 And inside the little boxes you find the wrapped candy. 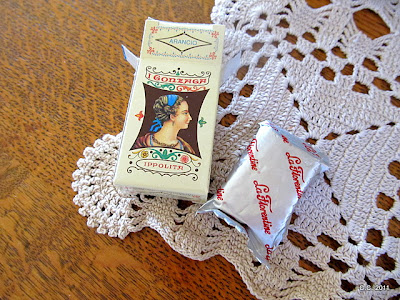 When you open the little foil wrapper (I think it was a paper wrapper then) you find the Almond Nougat candy inside. 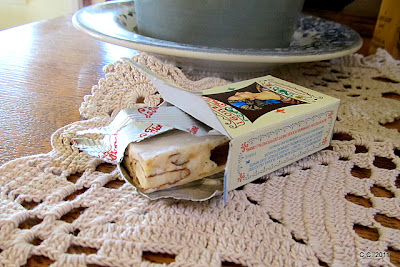 I remember Vanilla and Chocolate. Now there are three flavors: Lemone (lemon), Vaniglia (vanilla) and Arancio (orange). Six pieces of each flavor. Eighteen times to bite into a wonderful nougat candy with almonds in it and a paper thin edible wafer on each side. No preservatives or artificial coloring.
The edible wafer is the unusual thing that I remember when I was little. I thought that it was paper. It looked like paper but it tasted sweet and made biting into the nougat easier because your teeth didn't stick to the candy. The wafer also melted in your mouth. It was, to borrow a cereal ad phrase, "a mouth full of joy".
So, when I unwrapped this present from my friend, I squealed with delight. And as I ate that first piece of candy all those memories came flooding back. The anticipation of my grandmother's visit and her family being there at our house when I got home from school. The idea that they were coming down to see us. The hugs, kisses and the love that ensued....   It was always a day of joy and a time when I felt the circle of family was complete.
We would spend the afternoon talking, laughing, drinking coffee (Milk for me.) and  they would tell me about the latest adventure on the farm  or how Frosty ("my" horse) found the little lawn next to the house and started eating the grass.... how the fox got into the chicken house...  about the rattlesnake that ate rats in the basement. Stories that, too this day, make me understand the shape of my life now.
Mom would have baked something delicious to go with the coffee or sometimes Grandma would bring one of her pies. Oh, it was a wonderful day.  We would all sit there and share the company of each other. It always made me feel very grown up.
Dawn sent this candy because I had talked to her about it and all the memories it invoked.
I think she remembered the candy too. She has an amazing memory.
Somewhere in our high school years she moved and we lost touch. We never connected with each other again, until the day I got an email from a friend that said someone had read a comment  from my sister on her blog. This person was asking if this commenter (my sister) had a sister named ........ and had they lived in Gregory Gardens in Pleasant Hill? Amazing! It was my childhood friend Dawn. She had found me.
. She had been living in Oakland, CA. while I was raising children not forty miles away. Amazing!,
Now, my son lives in Oakland. In those early years my husband worked in Oakland. I could have passed her on the street. We looked for a house there. The Prospector played softball there.
She found a comment on someone's blog and followed up on it.  Seems simple enough. She says our mothers had a hand in all of this. It could very well be true.
We were just on a different branch of the same tree... "Six Degrees of Separation." ?   I'm not sure, but I know that it's weird how life can be so amazingly coincidental sometimes.
I do believe that the connections one makes in life are always there, waiting for awareness and understanding. That each person you have a relationship with (of any kind)  makes a new little part of you. Each relationship changes you in many ways.
Dawn and I were children. We played with dolls and took ballet together. We walked to school each day together. Well...the truth is we rode the bus except for the last few years of school... but you understand what I'm saying . Even as children we had a history... the beginnings of a Story... together.
She remembered those little Torrone boxes in a bowl at my childhood house and the memory was inside of her. The real gift is that she remembered, and that I, now, have become the recipient of that shared memory.
What a beautiful thing it is.
To eat a piece of that memory and taste the love of that distant time.
The thought is as sweet as the candy itself.
Posted by farmlady at 11:38 PM