This is an admission of guilt and a sad tale of inattention.
I sometimes leave the big halogen light on at night when The Prospector is gone. It's up in the peak of the south garage wall. In the morning after the light has been on, there are thousands of flying insects on the wall and  window.... and on the rocks below. 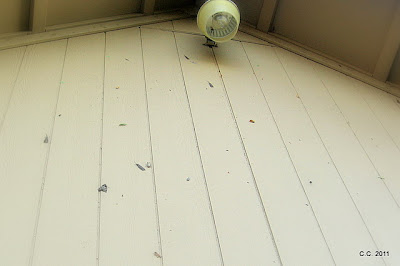 There are moths, Lacewings, Dobsonflies, and beetles all exhausted from the activity of the night and flying into the light.
Given the nature of these insects, especially moths, the light absence at night makes them rest or hide. For that reason, when I turn on the strong light in the darkness, they think that it is daytime and they go to that heat source. They are especially attracted to the ultraviolet light emitted by the big light because they have radioactive cells that attract them toward the luminescent energy. The white light attracts these insects even more.
So, in the morning, they were all just quietly clinging to the wall. Some were so still that I was able to touch them without them moving or flying away. 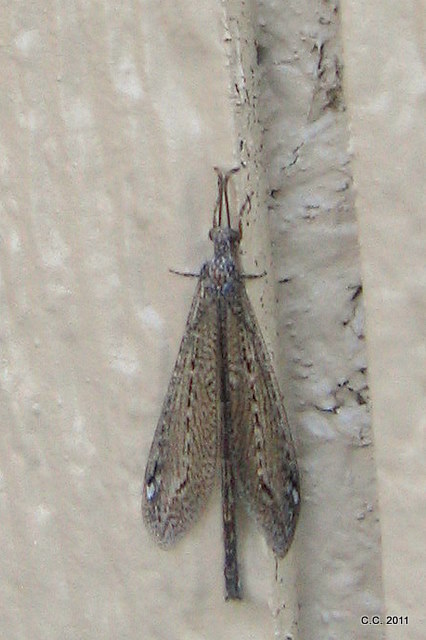 Like this Giant Lacewing. Well, it's not really giant. It's only about an inch long but it's beautiful.
This beetle is called a Ten Lined June Beetle. I saw it on the screen and walked up to the window to take a closer look. 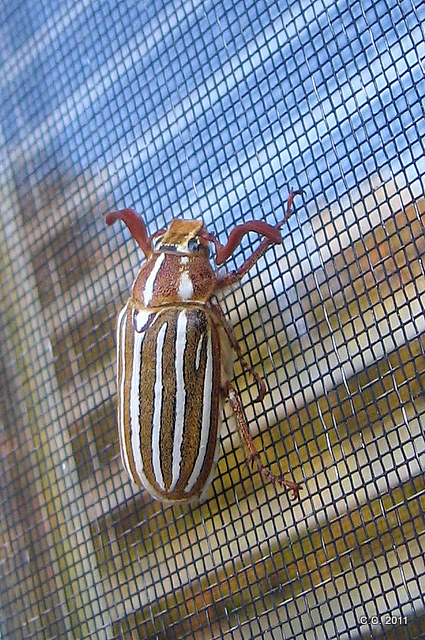 This is a beetle that I have seen before. You don't forget because of it's beautiful white stripes  and  the fact that there are so many of them around here in the summer. It's about 1 to 1 1/2 in. long and has a distinctive face. 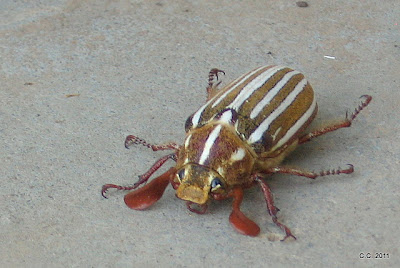 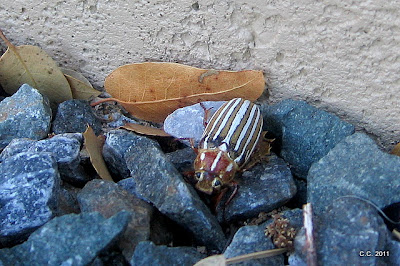 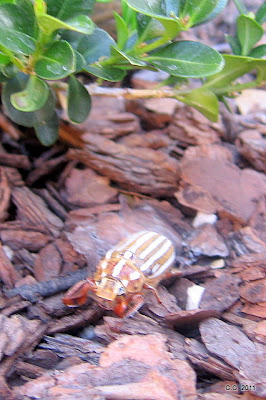 In the planters, on the rocks and concrete... 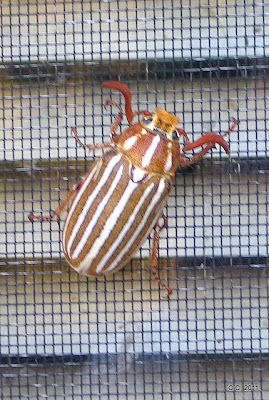 As I stood next to the window taking pictures of this beetle, I heard a noise. It was a soft cry, almost a mewing sound. I thought that maybe Annibel was on the other side of the window in the garage trying to tell me that it was time to let her out. It was very early in the morning. I hadn't let her out yet.
I said, "Is that you Annie?" But there was no answer. I saw no movement of the blind on the window.
I listened again and realized that the sound was outside. It was somewhere near me but I couldn't tell where it was coming from.
I backed up and looked around me. This was the most unusual sound I had ever heard. It was almost a cough and it was so muted. I took another step away from the window and looked down at the rocks below my feet.... and my heart skipped a beat as the tragic scene unfolded before me.. 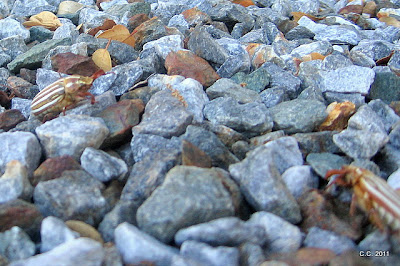 In my fervor to take pictures of the beetle on the screen I had not thought about the beetles that might be elsewhere and I had accidentally stepped on one of them (the one on the right). It was dead.
This poor little beetle was still and its body was broken by my giant, monstrous sandal as I had recklessly walk over it without looking.
The sound was coming from the other beetle, on the left and it was crying . I can only say that to my mind, this small creature was crying. It appeared to be breathing heavily and moving up and down. I don't know if it was crying for its mate, or warning me that it was there, or telling me that I was the worst of all beings on earth and had, because of my human carelessness and incredible stupidity, killed one of its kind.
I cannot tell you how awful I felt.
This was the cry of fear and sadness that makes this creature as real and important as any human tragedy.  There will be a great sadness inside of me for a long time.
I walked back into the house and told the dogs what had happened. They didn't seem to care,.
So, I tell you... because I had to tell someone.
***************
The next morning all the insects were gone. Only the one I had stepped on was still there, lying on the rocks. I picked it up and brought it inside.
I have it's broken body sitting on my computer. It's still beautiful. It looks like nothing happen to it... only it doesn't move and one of it's antennae is missing.
I'm so sad about this. It seems such a little thing, but I will hear that other beetle's cry forever. Don't tell me that the tiny creatures of this world don't have emotions and feelings. My carelessness caused an unintentional death.
I wasn't talking on a cell phone while driving.
I didn't step on the accelerator instead of the brake.
I didn't forget my child in a hot car or run a red light.
No, I just didn't watch where I was walking.
To some this isn't the end of the world.
To some... this isn't even a tragedy.
It was just a bug....
But, I had to tell someone.